It is almost as if Corsair has heard the cries of overclockers who still remember the days when you could overclock for the stars on an air cooler. With the trends of AIOs featuring silence and RGB over all aspects of design, it is good to see Corsair stepping out of their comfort zone and returning to air cooling after many years of absence since the A50 and A70 coolers released a decade ago! If marketing hype is to be believed, Corsair intends their latest design to be the best of the best, and judging by the asking price associated with this product; they sure were not shy about demanding top-tier air cooler pricing, which raises the bar of expectations exponentially high!

The main idea behind the new air cooler was to make a substantial single tower, which can technically be viewed as a dual-tower design, but none the less, they strapped some beastly fans on it, which makes us think back to the NiC C5, and what it did for the CPU air cooling game. Along with a huge tower paired with appropriate fans, performance should not be an issue for such a cooler. However, along the path of development, Corsair considered aesthetics a high priority and did a great job in that department as well. While they were at it, the also made calls to improve upon the mounting hardware, made sure the fans were adjustable to support any kit of RAM under it, and even went as far as to pre-apply thermal paste, including more of it, as well as providing a screwdriver to eliminate any potential choke points for the customer!

While early samples of this product did show some concerns and are why we did not have a launch day review of this cooler, Corsair took immediate steps for anyone who reported an issue and sent them new coolers. Our second sample did not have any problems with it when it arrived and is the cooler we are showing you at this time. Even though there were some teething issues, they are over with and should be of no concern to those looking to obtain one today. We are jumping ahead a bit here, but with that, we see with the Corsair A500 High Performance Dual Fan CPU Air Cooler, it takes us back in time, to a better time in air cooling in our opinion, when manufacturers were not afraid to make a run at the top of the charts! Within the chart taken from the A500 product page, we find that Corsair starts things out with the mention of the five-year warranty, and then tells us that the fans are PWM controlled. The dimensions of the heat sink are presented twice, once without the fans, and again with them, and since the tower needs fans to work optimally, we will stick to those. With fans included, we are dealing with 144mm of width, 171mm of depth, and those will not change. The 169mm height shown is the minimum height. Any adjustments to them for RAM clearance will increase the overall height, and is something to consider when picking parts to go with the build! The base of the cooler utilized direct-contact heat pipes, and of the four pipes, the two in the middle are 8mm in diameter, while the outer pair are 6mm in diameter, delivering a TDP rating from Corsair of 250W.

Skipping ahead, we see that all included, the tower and fans weigh in at an astounding 1460 grams. Keep in mind, though, over 100 grams of that is contained in the slick-looking top cover plate! As to its compatibility, the A500 works with the Intel LGA 115X, 2011, and 2066 motherboards. It is also compatible with anything AMD has made, since and including motherboards as far back as AM2. We also continue to find that the pipes are made of copper and the fins made of aluminum.

Cooling the tower is a pair of 120mm ML Series fans. These Mag-Lev fans are rated at 2400RPM at full power, but as mentioned earlier, they are wired for PWM control. These fans do not offer any sort of RGB, or lighting in any form for that matter. If you wish the fans to rest in the lowest position, your RAM can be at max 45mm tall. Otherwise, you will definitely need to ponder a wider chassis to allow for the increase of cooler height doing so. Each of the fans has the potential to deliver 75 CFM of airflow with a high static pressure rating of 4.2 mmH2O! The last thing mentioned about these ML fans is the noise, where Corsair shows a 36 dBA rating, which means this cooler will be loud compared to what many are used to today!

Out of the three things to consider, price plays a huge roll in a purchase. That said, when you visit the product page, the MSRP is there in the upper right-hand corner of the page, asking $99.99 for the A500. Pricing is followed at Amazon as well as Newegg, where the A500 can be found at $99.99 with free shipping at both. Considering what we see in other $100 air coolers, and what we have seen some $50 coolers do in the past, Corsair is setting the bar very high for the A500 when it comes to expectations of performance and value. Let's just hope it can live up to what the A500 High Performance Dual Fan CPU Air Cooler seems like it should be able to do without breaking a sweat! 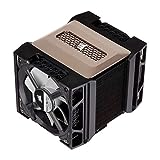