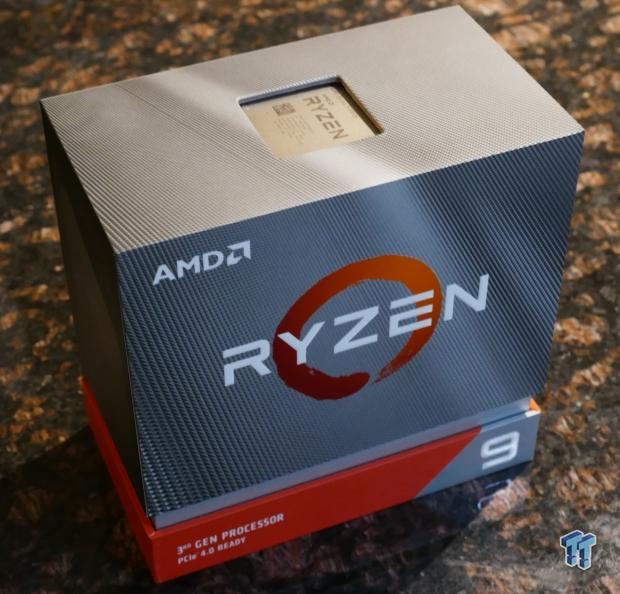 The box you see above contains AMD's first 16-core 32-thread processor for their mainstream platform. It utilizes the Zen 2 microarchitecture, which is not only faster, better designed, and more power-efficient than Zen 1, but it also utilizes TSMC's 7nm node. What you see above is the flagship CPU of AMD's 3000-series product lineup and could possibly be their best processor.

Let's take it for a spin.

Details are already known about the processor, although you can't buy it until November 25th. For starters, the CPU features 16-cores and 32-threads. It has a base clock of 3.5GHz, but can Turbo up to 4.7GHz, AMD's highest boost.

The Ryzen 9 3950X is priced at $749, but we are not quite sure how supply and demand at launch will affect this as it typically does regardless of vendor and product placement. 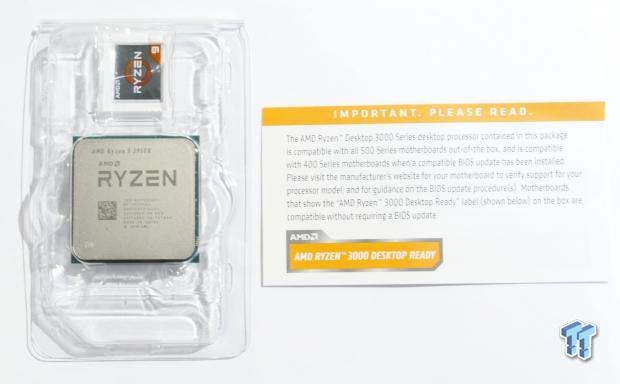 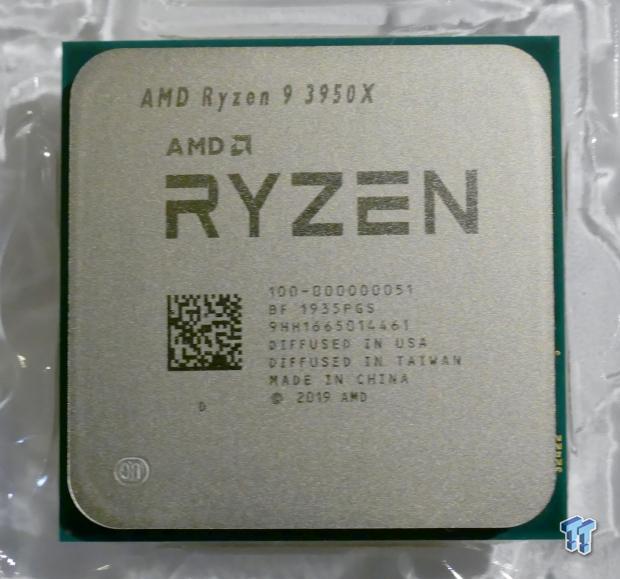 There is nothing special about the top side of the CPU or the bottom, but we should mention the CPU's internal heat-spreader is soldered. 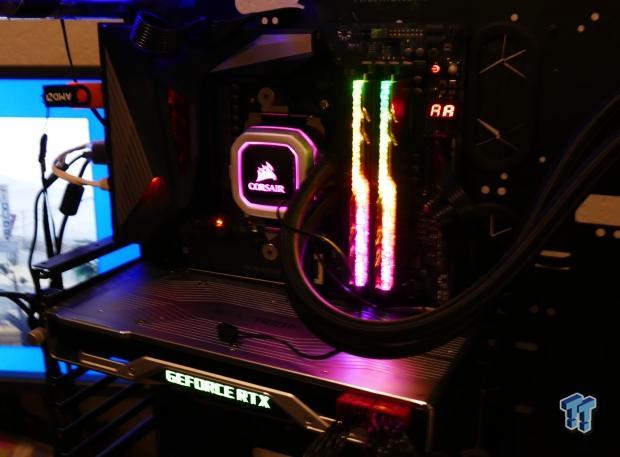 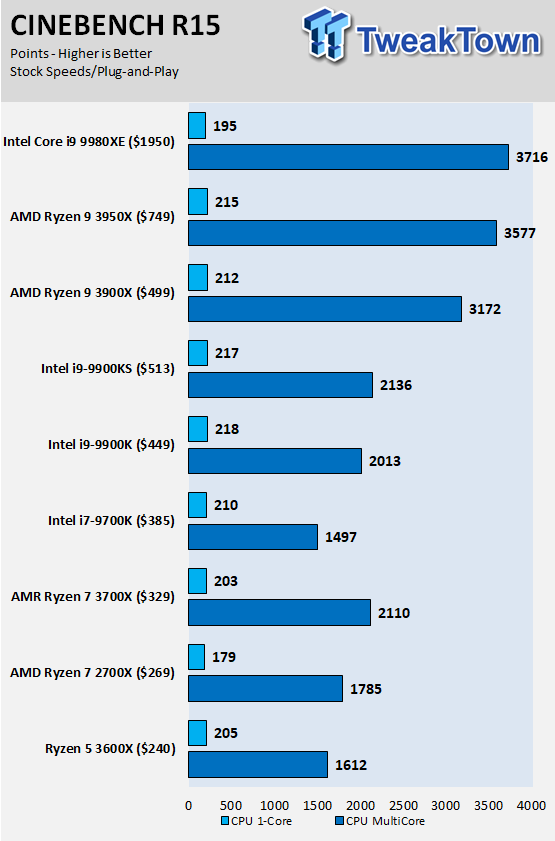 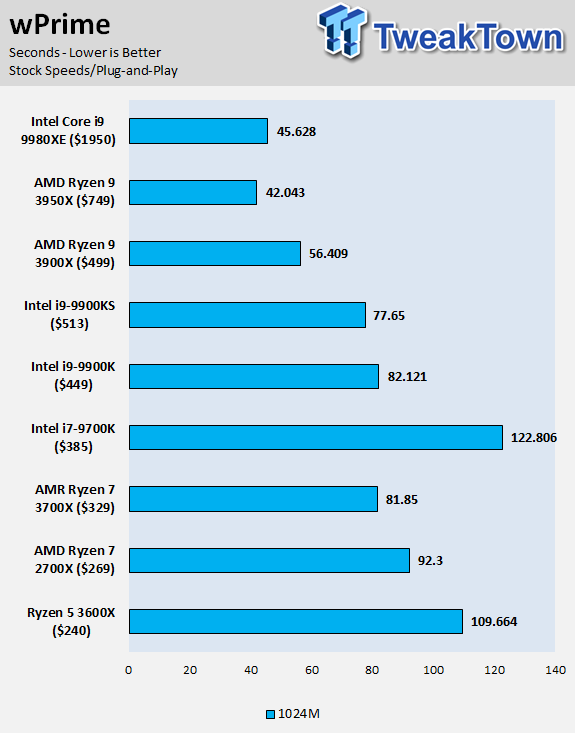 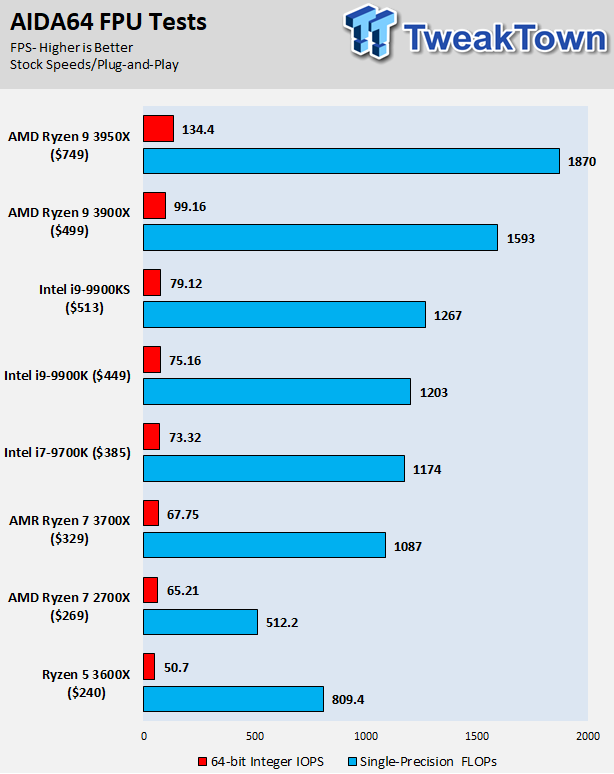 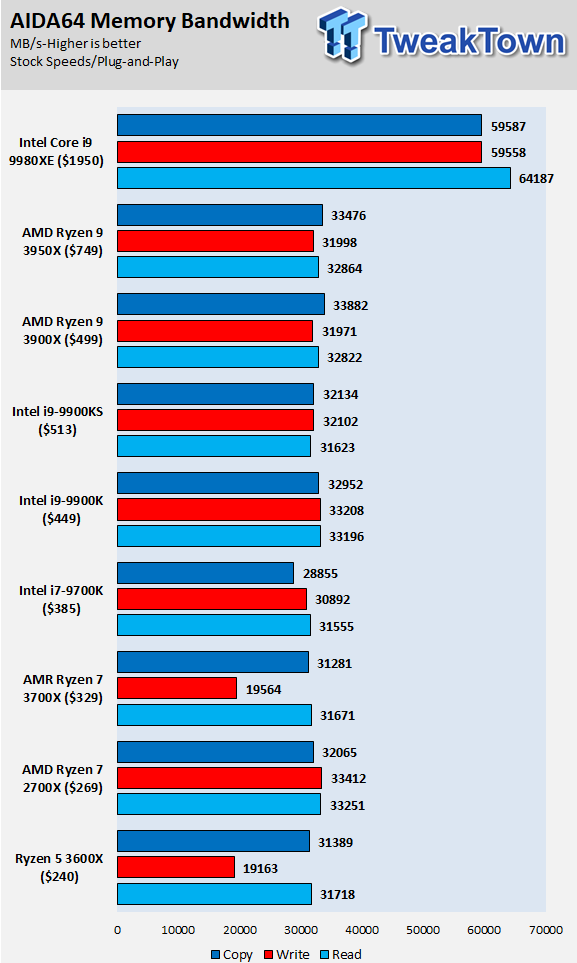 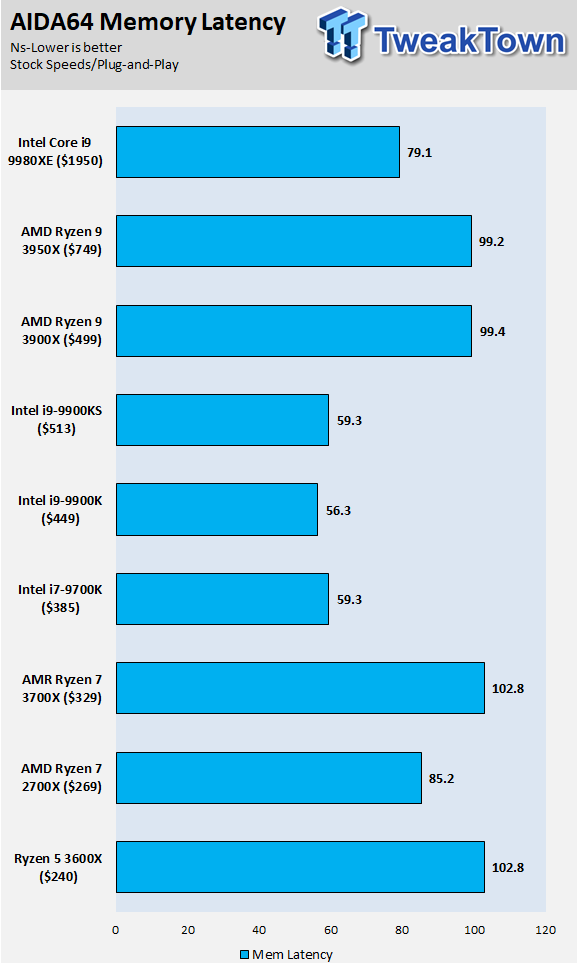 AMD's internal testing showed the 3950X equal in CINEBENCH R20 to the 9980XE, and slightly behind the 10980XE. We used R15, where it was slightly behind. That being said, if you enable PBOC (which is many times enabled by default by board vendors, the score shoots above 4000).

The single-core performance here is excellent. At 4.7GHz, we score in the i9 range, which is huge. The 3950X easily wins in wPrime, even against the higher core/thread count 9980XE. In FPU tests, the CPU does quite well. Memory bandwidth and latency are similar to those results from the other high-end Ryzen AM4 CPUs. 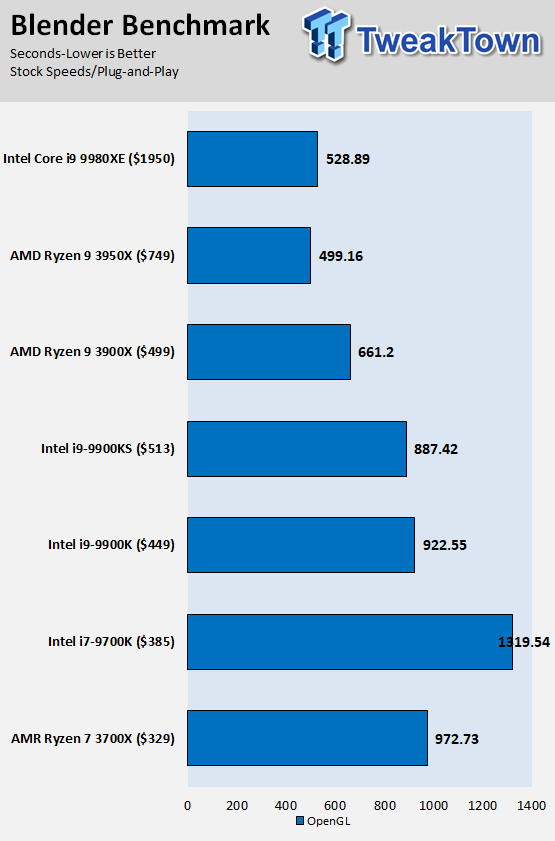 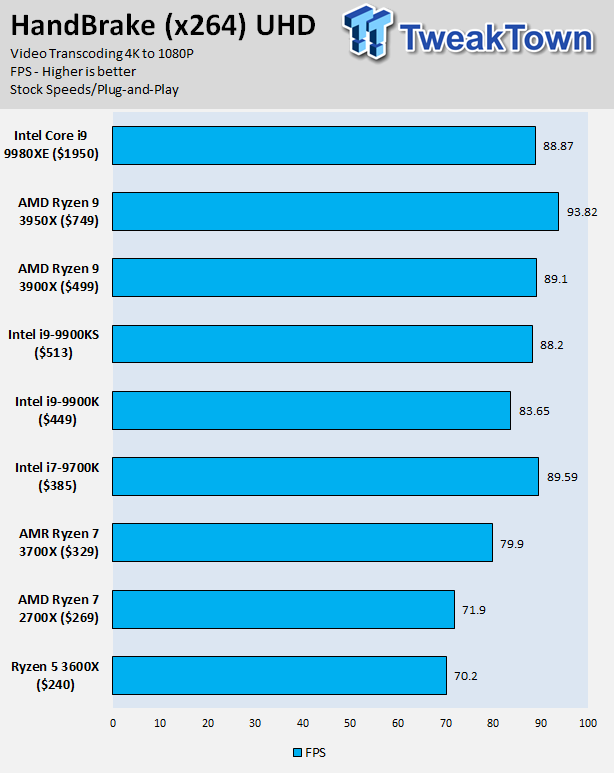 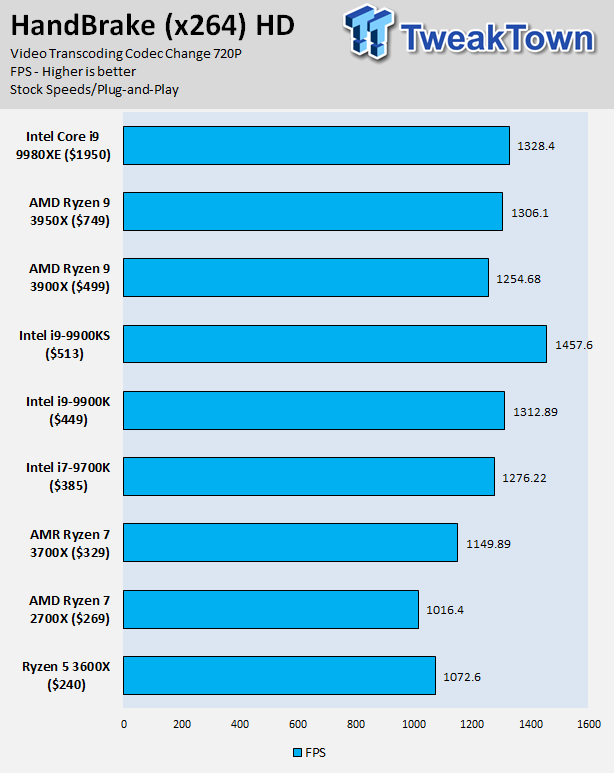 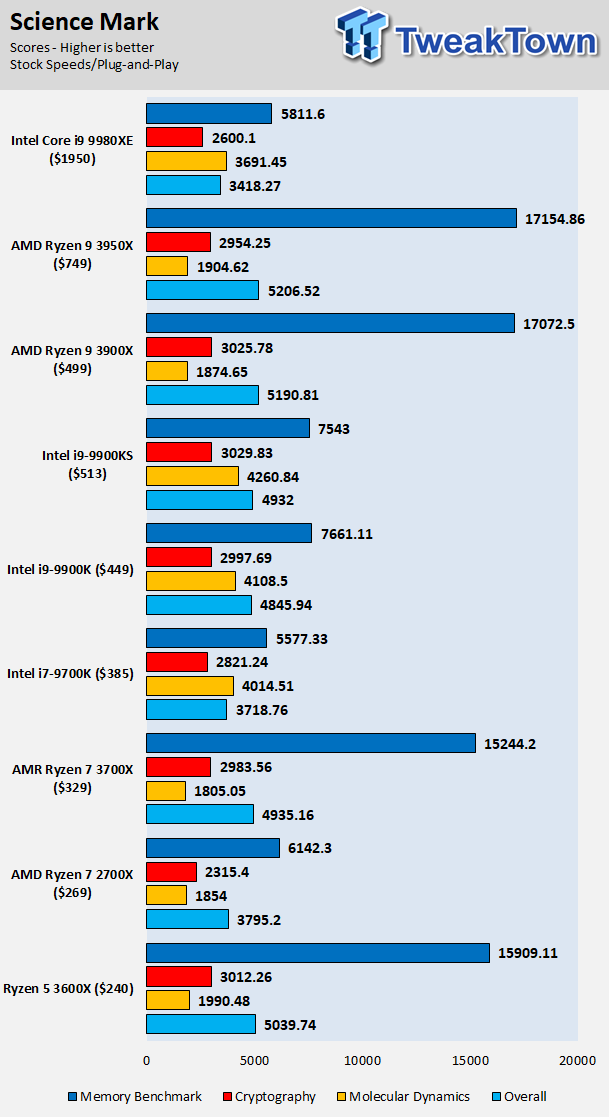 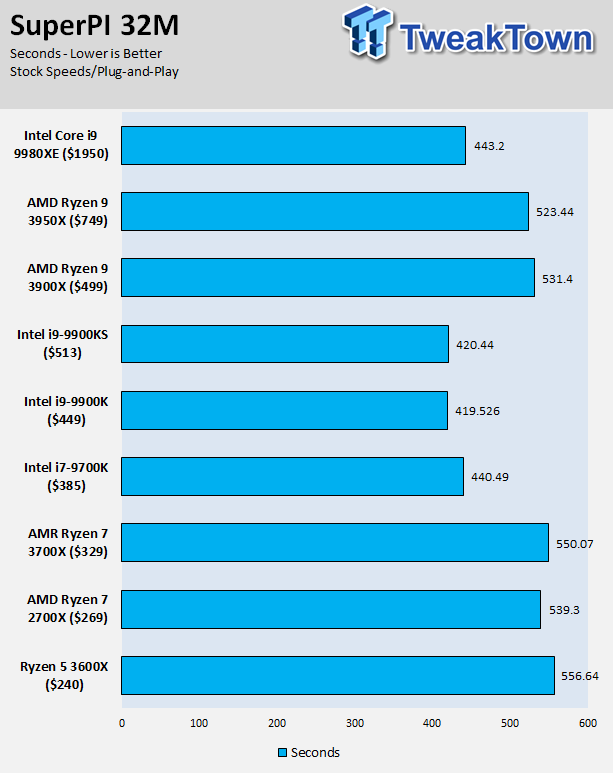 In Blender, the 3950X once again takes the cake from the 9980XE that costs more than double. It wins in HandBrake as well for transcoding down to 4K, but gets slightly beat in encoding. It does exceedingly well in ScienceMark.

In SuperPI, we see some improvements compared to the 3900X as it offers a 100MHz higher Turbo clock. 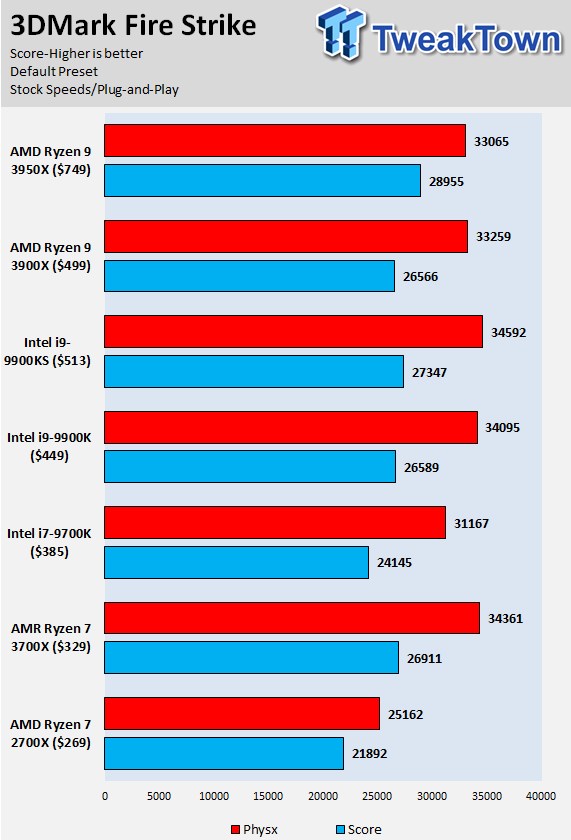 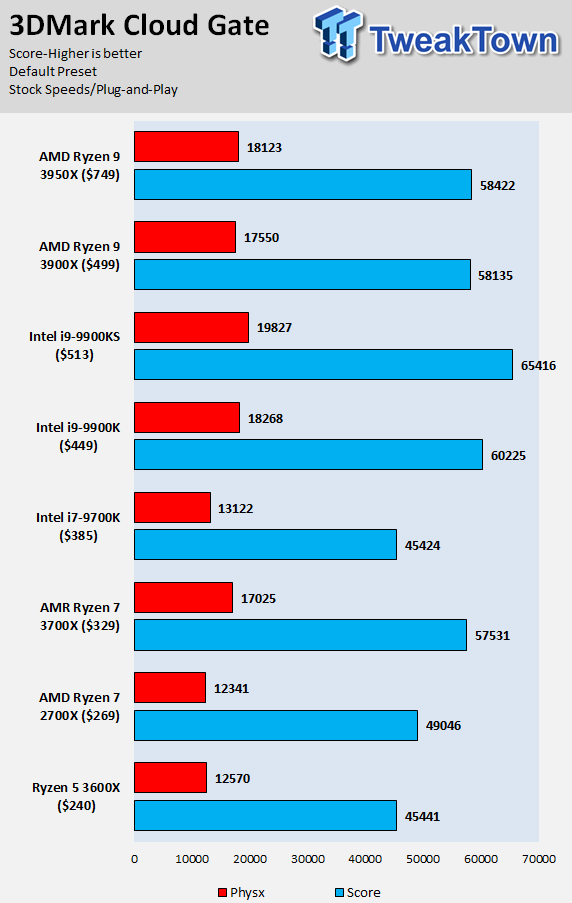 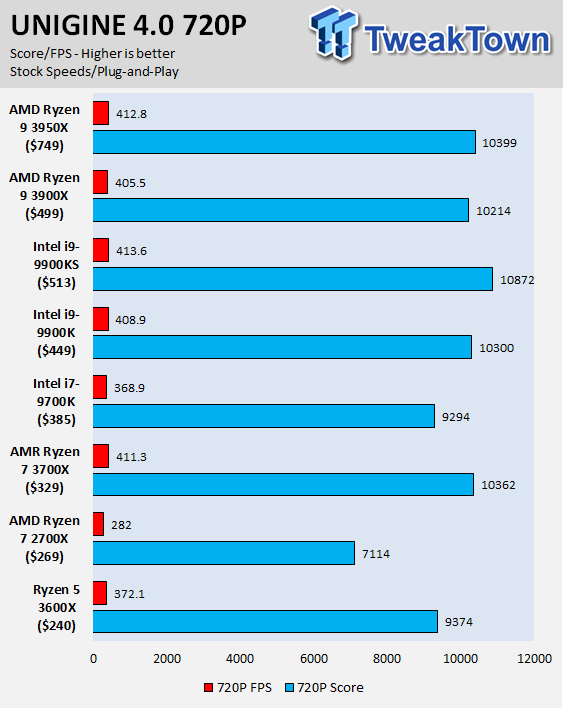 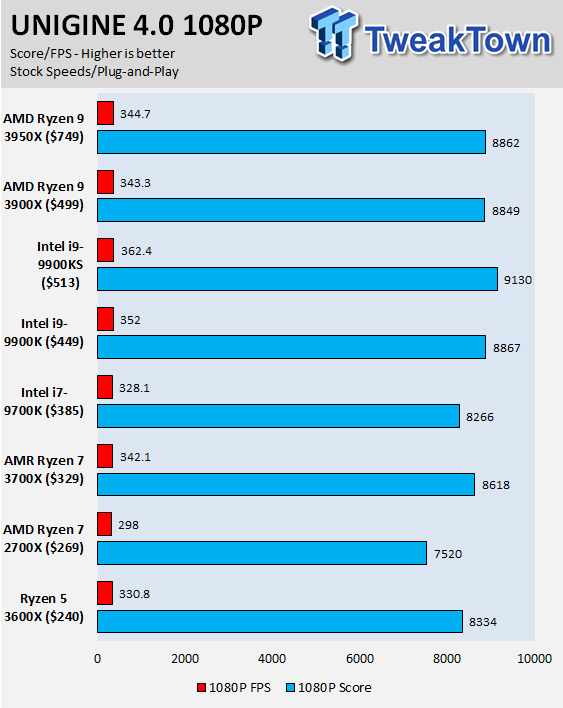 In 3DMark FireStrike and CloudGate, it performs as expected, quite in line with slight frequency bumps and core count increases. It beats blows with the Core i9 series. In UNIGINE, it pretty much matches the 9900K, but still loses slightly to the 9900KS, which explains why the 9900KS exists. 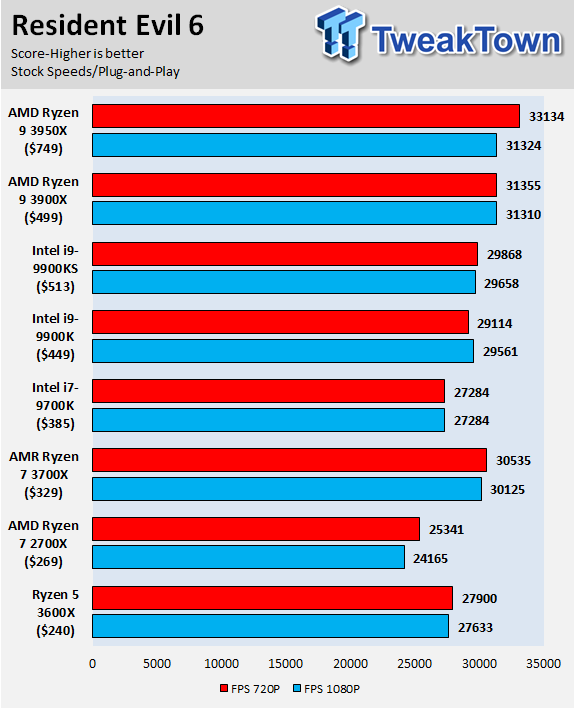 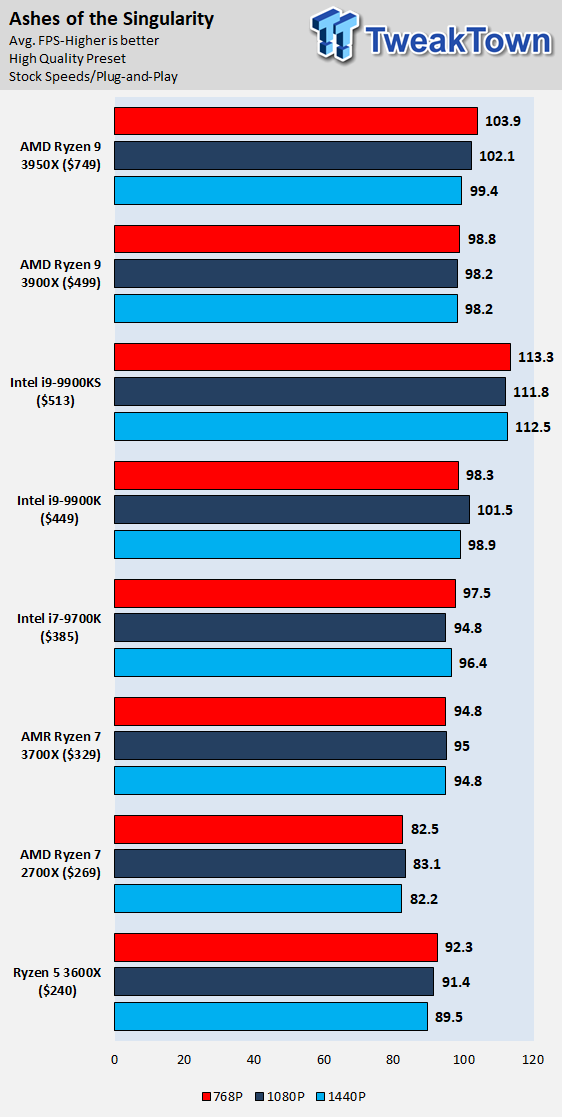 In gaming, the 9900KS still has the lead, but with AMD trailing really close. 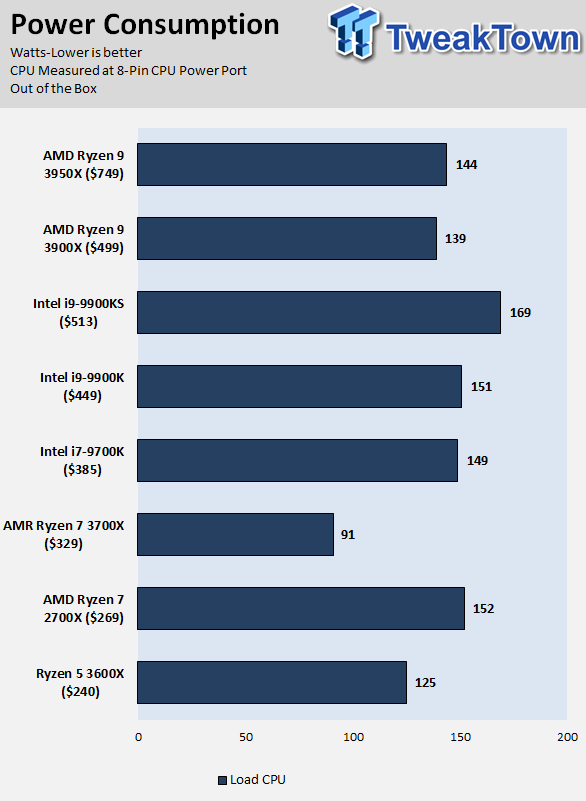 Ryzen 9 3950X doesn't eat up a crazy amount of power. It uses slightly more than the 3900X but offers better performance at higher frequencies and with 50% more cores. 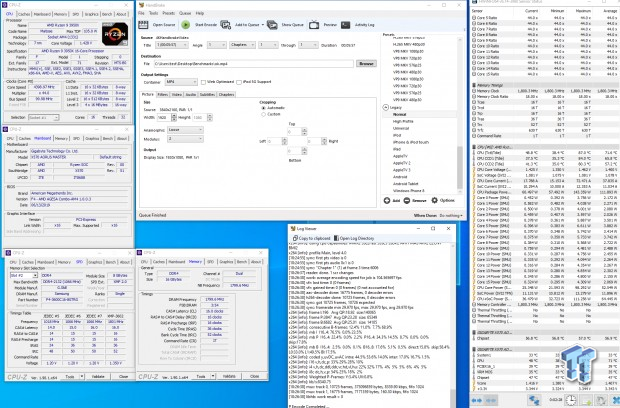 We were able to get the CPU to 4.4GHz with a fabric speed of 1800MHz and DRAM at 3600MHz with XMP enabled. Our VCore was around 1.38v full load, and our temperatures were quite manageable. Performance is a bit better than stock, so PBOD might offer you better performance than a manual all core OC depending on your use case.

The CPU was very easy to take up, and 4.4GHz all cores is something none of the Ryzen 3000 series CPUs we have reviewed can do. 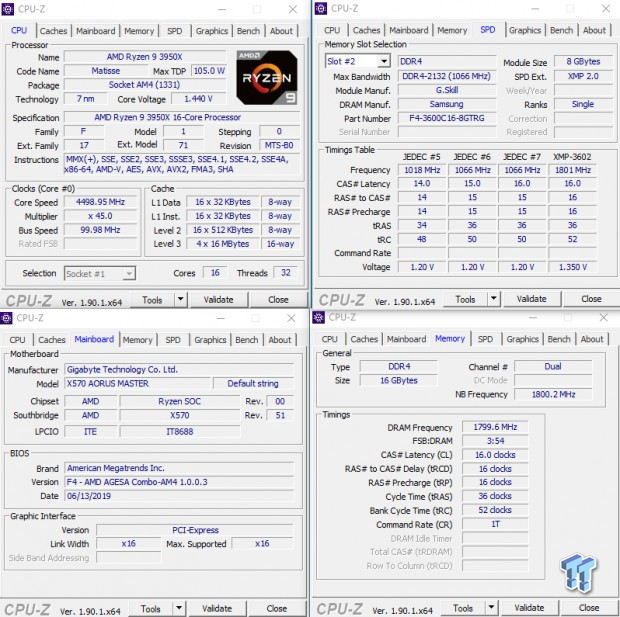 Here is something interesting. We were able to get 4.5GHz and boot up, something we weren't able to do with any of the other Ryzen 3000 series CPUs.

Here is where you can fast forward to the final section of the review and get a quick recap and points on the AMD Ryzen 9 3950X.

Extremely good performance: AMD's Ryzen 9 3950X is the performance king at its price point. At first, I doubted how AMD would be able to justify its $749 price point, but now I have no doubts - the CPU is well worth that amount if you need performance in both gaming and productivity.

It beats out Intel's 9980XE in many benchmarks and pretty much equals the 9900K in gaming. The 9900KS still is the top CPU for gaming, but the 3950X is not trailing far behind, which makes it an excellent buy.

Power Efficiency: The power efficiency of the 3950X is off the charts impressive. At the same TDP, with 50% more cores and higher clocks, it barely uses more power. It also beats out the 9800XE in many SMT and single-core applications and matches the 9900K in many games, all at lower power.

Overclocking: The Ryzen 9 3950X must be heavily binned like the 9900KS. We were impressed with the 4.4GHz all-core clock, and we were further impressed we could boot at 4.5GHz.

Platform: We love the PCI-E 4.0 inclusion, that is all.

Not cheap: Just like AMD recommends a water cooler, we do as well, and that is going to add on to cost. That being said, X570 motherboards tend to be quite pricey in many cases because of the PCI-E 4.0 addition and tons of USB 3.1 (10Gbps) ports. So, you will be spending a bit above $1K for the CPU, cooler, and motherboard, while the rest of the system will be comparably priced to Intel. 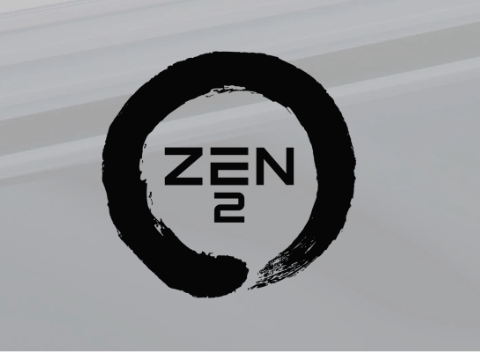 The Ryzen 9 3950X is the most impressive CPU we have seen from AMD, not only when it comes to beating Intel, but also when it comes to taking full advantage of the new 7nm process and microarchitecture.

We are so impressed by this CPU, but we will say that at $750, AMD is pricing it in scale to what the 3900X costs in regards to price per core, but AMD doesn't have to budge too much in that regard because of the performance. The existence of the 9900KS and the huge price reduction in the future Core X-series line by Intel all make sense now that the 3950X's performance has come to light.

We highly recommend a liquid cooler, but the CPU doesn't run super-hot when you use one. The easiest thing to decide in regards to the Ryzen 9 3950X was what award to give it, the TweakTown Editor's Choice. The Ryzen 9 3950X is AMD's crown jewel.

The Ryzen 9 3950X not only performs better than the higher core count competitor in many regards, but also excels at gaming unlike any other AMD CPU.