While the AMD Ryzen 9 7950X processor isn't going to be the chip of choice for gamers on a budget, for creators, it offers a huge increase over previous Zen 3 chips with the downside of an entirely new platform. 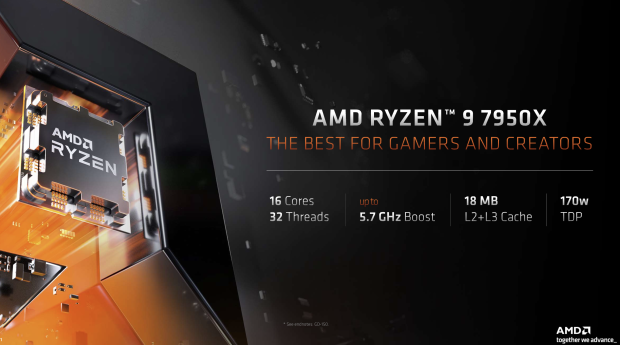 Admittedly, we are a bit late to the party with our AMD Ryzen 9 7950X processor review, but I didn't want to rush my testing, and we didn't receive this chip until launch day. At any rate, we were able to spend a few days testing and tuning with the 7950X, populating our charts with some impressive numbers. That said, up to this point, I'm not hugely impressed with Zen 4; though it does offer a significant boost over Zen 3, it doesn't give enough headroom to AMD for Intel's 13th Gen launch, which is coming up quickly. 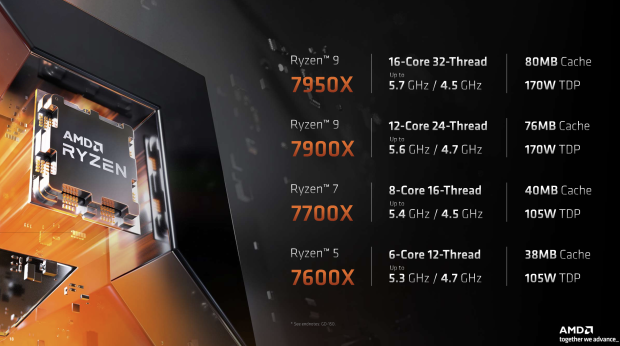 We have gone over this in each of the four Zen 4 reviews we have now published; the product stack for Zen 4, seen above, includes four SKUs hitting shelves for launch day, which was the 26th of Sept. Starting from the bottom, the 7600X is the six core 12 thread part, 105W TDP and 38MB cache with a 4.7GHz base and 5.3GHz boost clock. The 7700X is next with its full single CCD design, eight cores, 16 threads, a 4.5GHz base, and a 5.4GHz boost. It has the same 105W TDP but slightly more cache at 40M.

For those wanting information on the AMD Zen 4 Architecture, you can read that here. 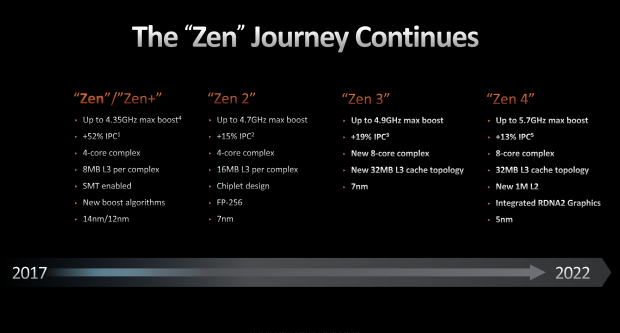 Zen 4 uses much of the design AMD launched with Zen 3, including the eight-core complex and cache topology. That said, there have been significant improvements in the design, allowing for higher boost clocks, up to 5.7GHz on the 7950X, a larger L2 cache, and finally, Integrated graphics from the RDNA2 family. 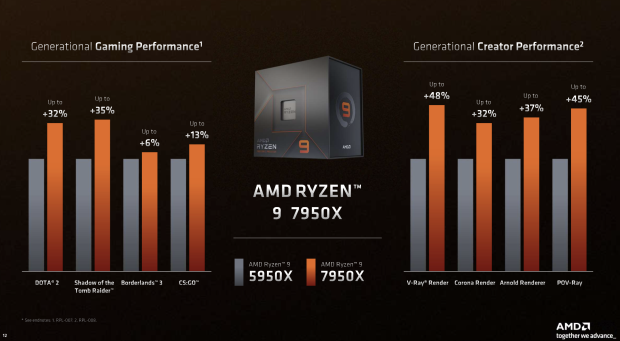 AMD has really put much of its hype on the 7950X, the above slide showing both Gaming and Creator performance uplifts over the 5950X. 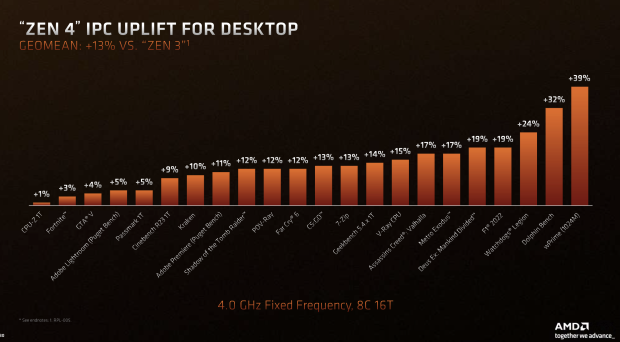 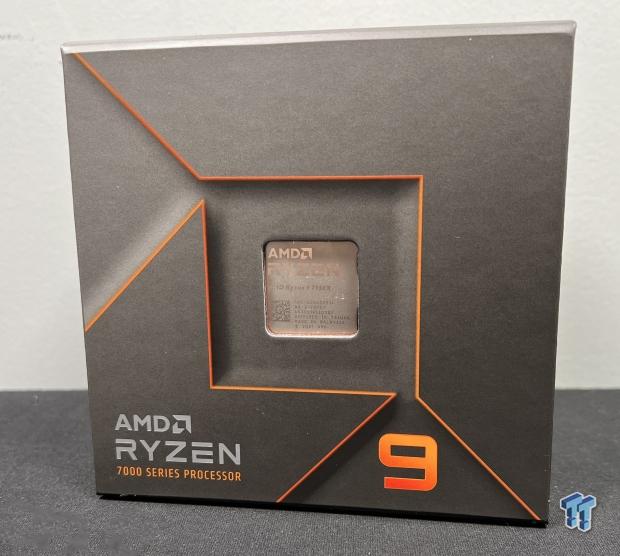 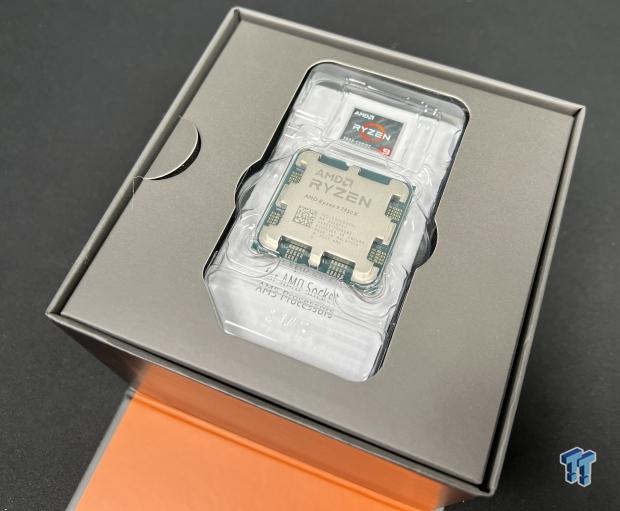 Unboxing, the 7950X is secured in its plastic retainer with a Ryzen 9 sticker for your chassis and reading materials underneath. 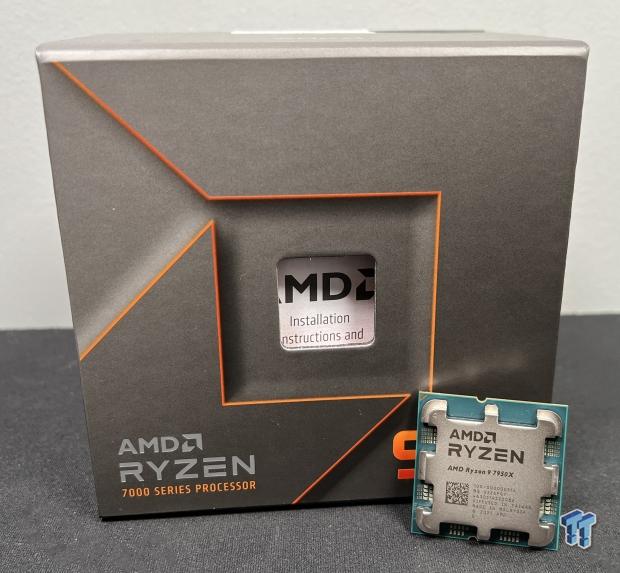 As with past Zen 4 articles, the 7950X has the same HIS design, shielding the SMD caps.

On the bottom, we have a smooth surface with the 1718 pads for AM5. 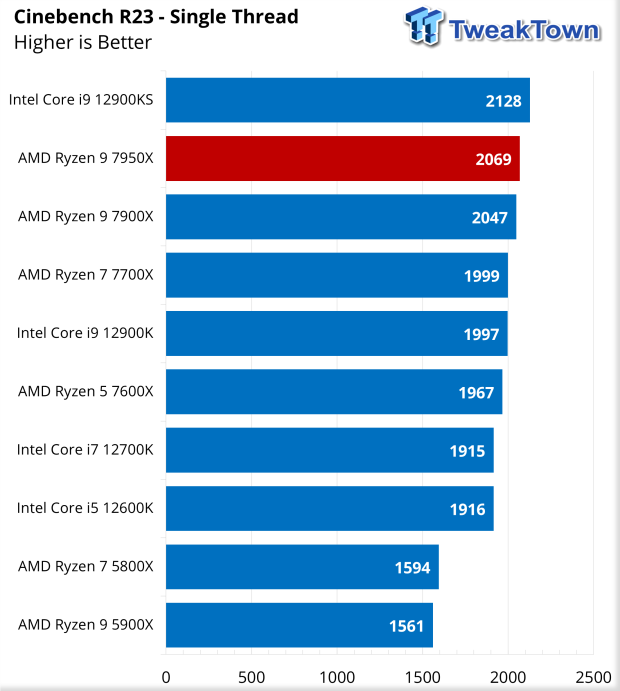 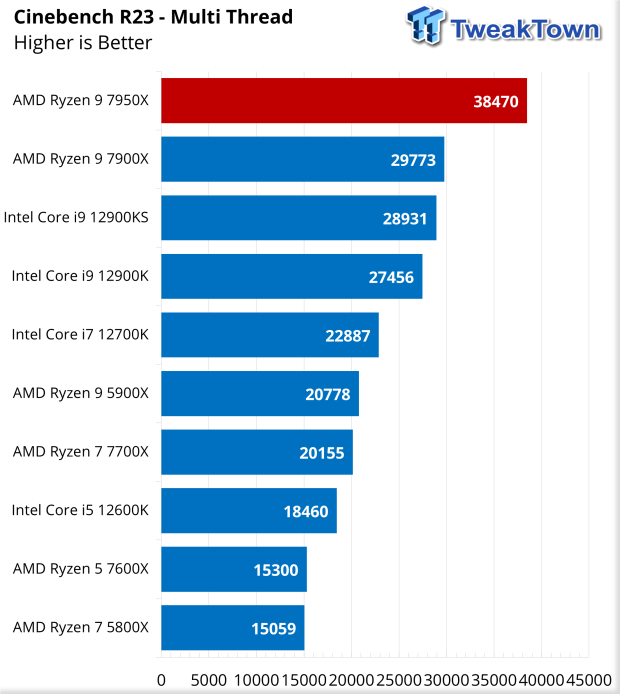 For those wanting information on Zen 4 IPC, you can read here. 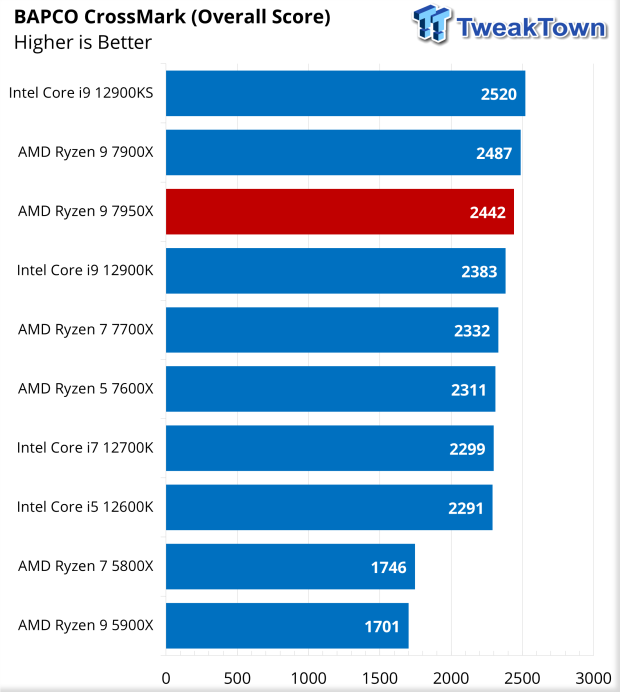 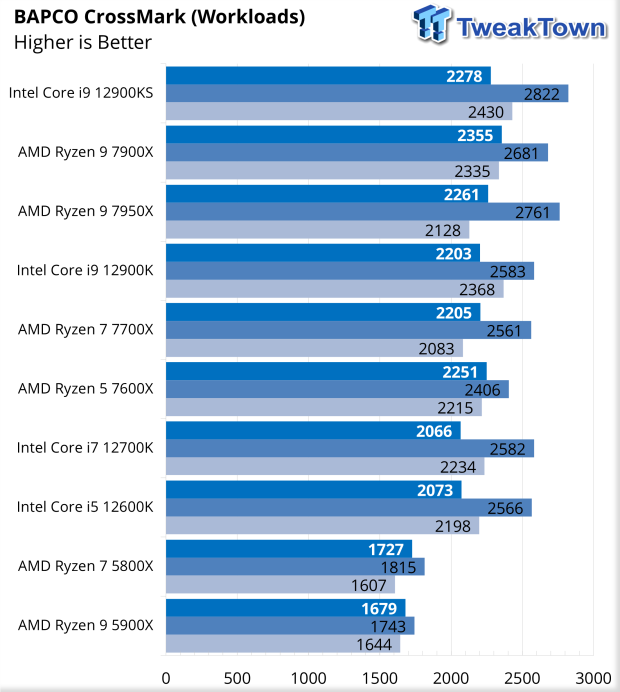 Above, we have a quick look at the workload breakdown. 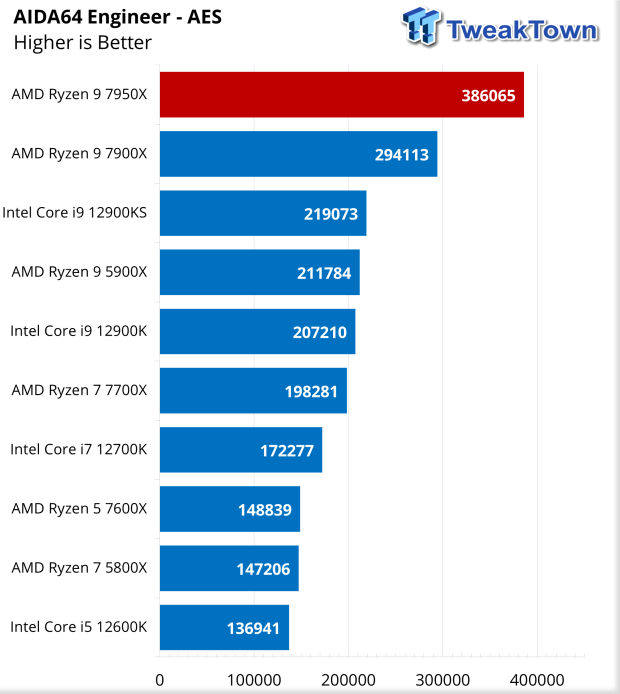 Tasks using AES certainly benefit from Zen 4. As seen above, the 7950X has no competition here as it pulls a huge 386K! 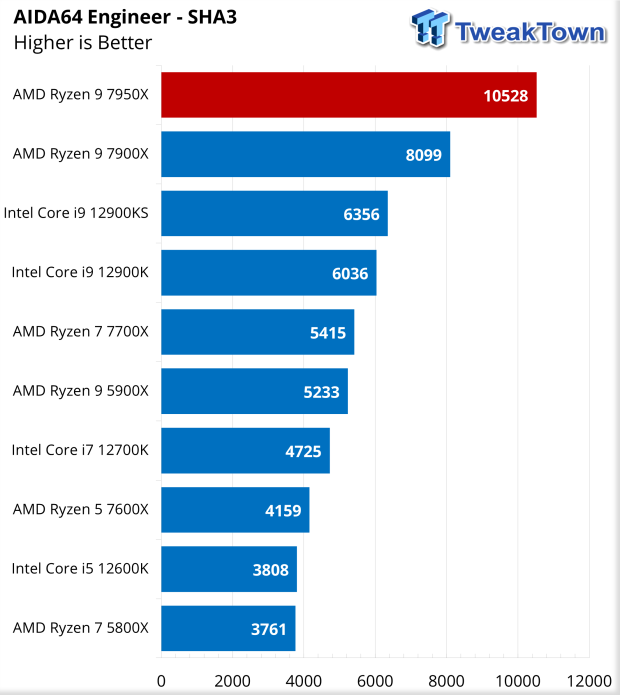 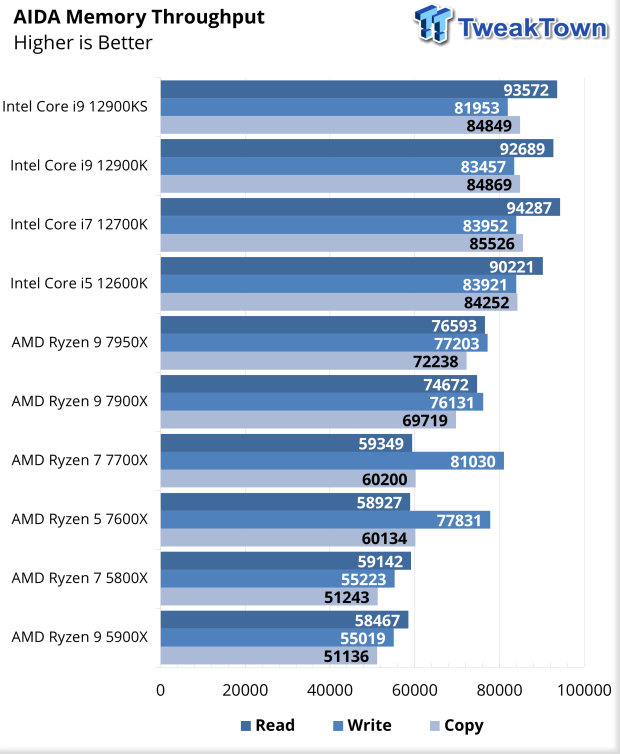 Adding in memory throughput, the 7950X offered 76K across the board with our Dominator EXPO kit. 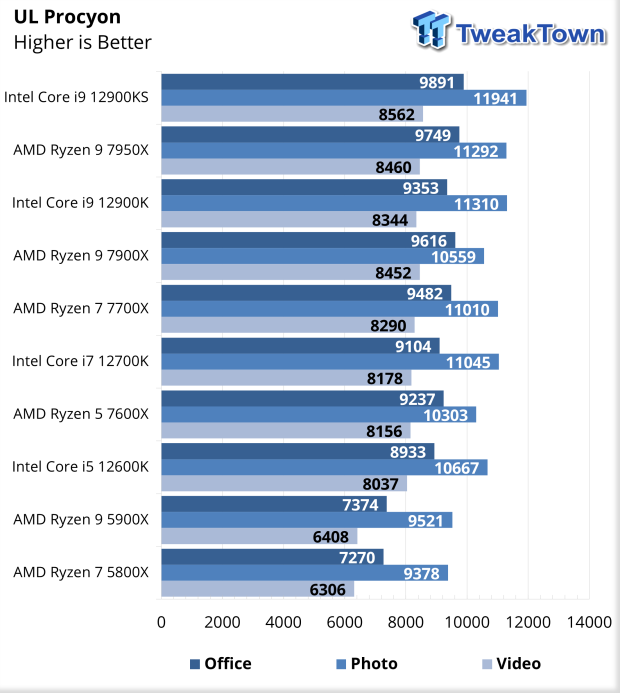 7950X did well in UL Procyon, the best Zen 4 at this point, excelling in Photo and Office. 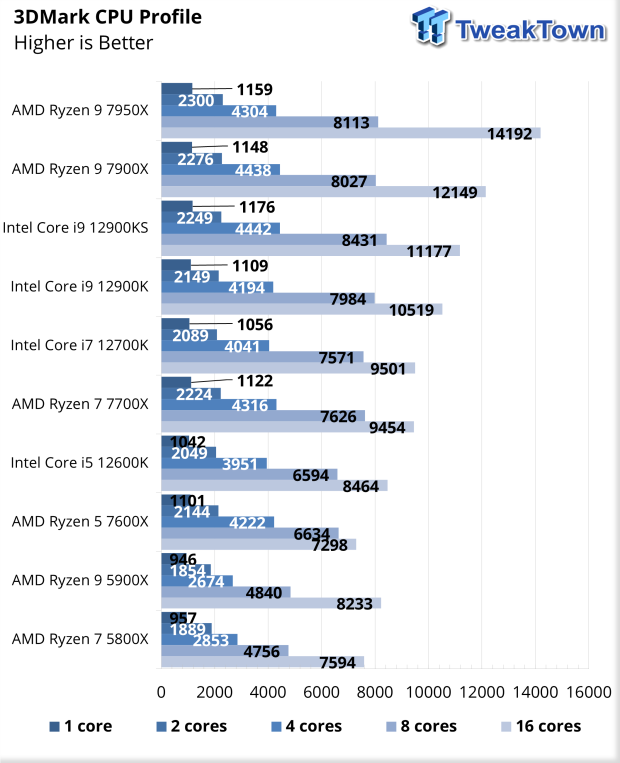 CPU Profile showed the 12900KS was better in a single thread, but as threads climbed, the 7950X did better and better, reaching a sixteen thread score of 14192. 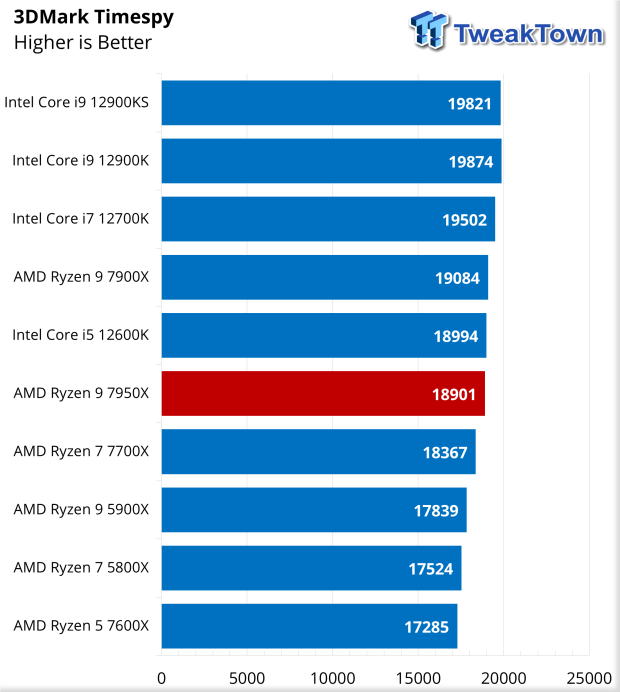 Our first "gaming" scenario is Timespy, landing us a score of 18901 overall.

Diving into gaming, we added a few new games to our list, including Ac Valhalla and Far Cry 6. We kept CyberPunk as we have been using it with our 12900KS on motherboard reviews, so we have a decent comparison. 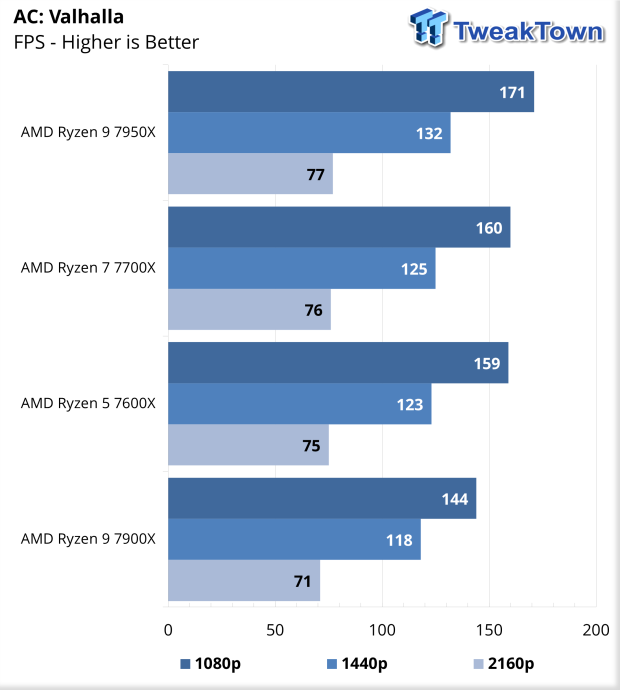 Starting things off with Valhalla, the 7950X, surprisingly did the best at 1080p with its higher boost clock allowing for 171 FPS. At 4K, all four samples perform about the same. 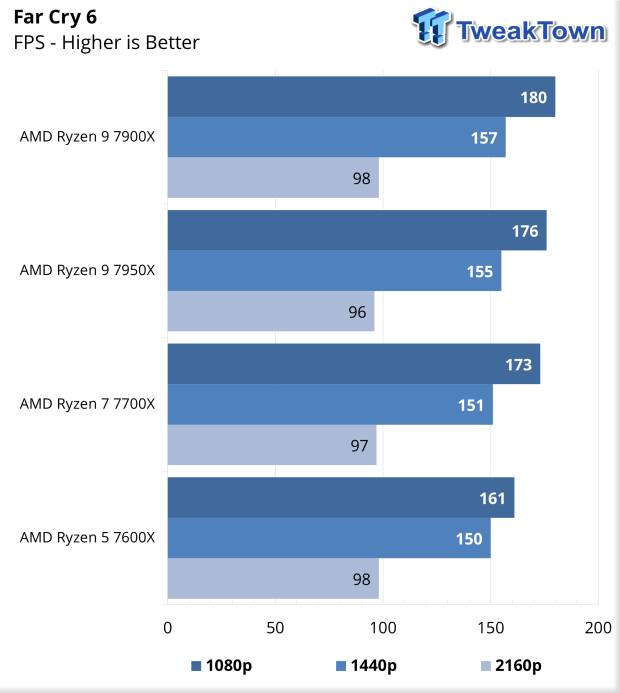 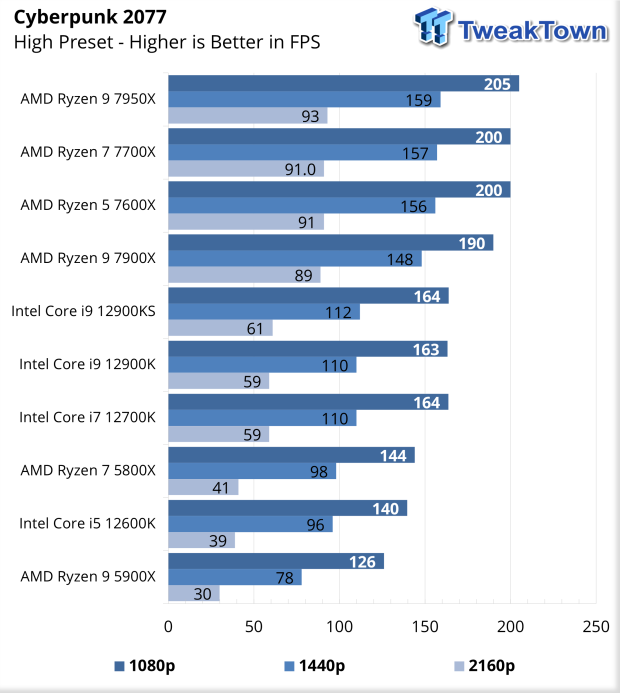 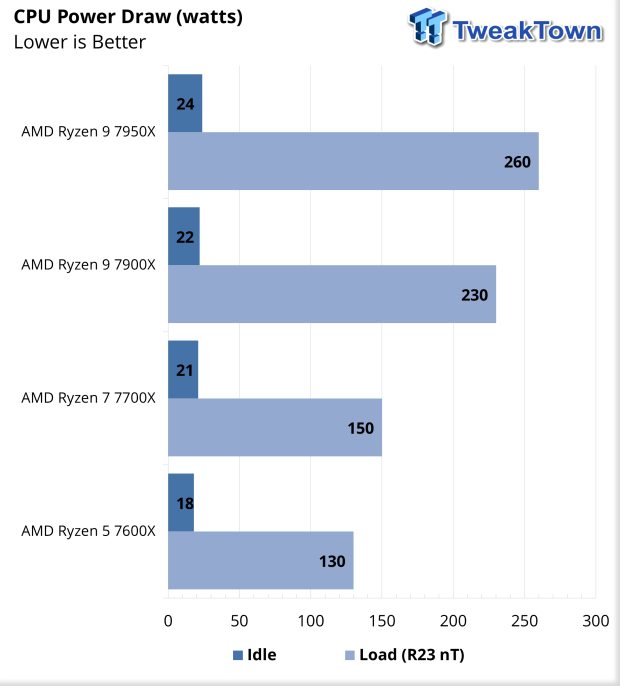 Power consumption is measured directly from the dual eight-pin connections. The peak power draw was 260W with the 7950X, while idle was just 24w. 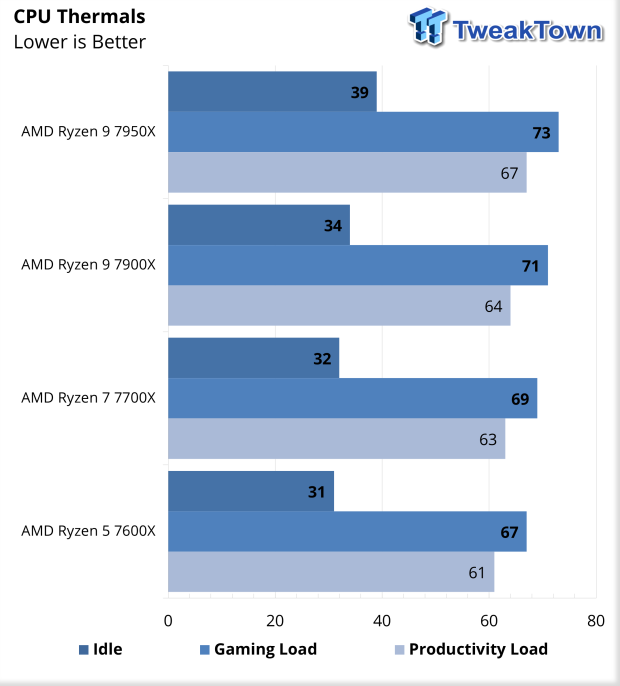 I know I mentioned it in the 7700X review, but our cooling setup is massive overkill for any CPU, so our results won't necessarily reflect what you would see on an AIO. That said, the 7950X peaked at 73c during gaming and 67c during Procyon testing. 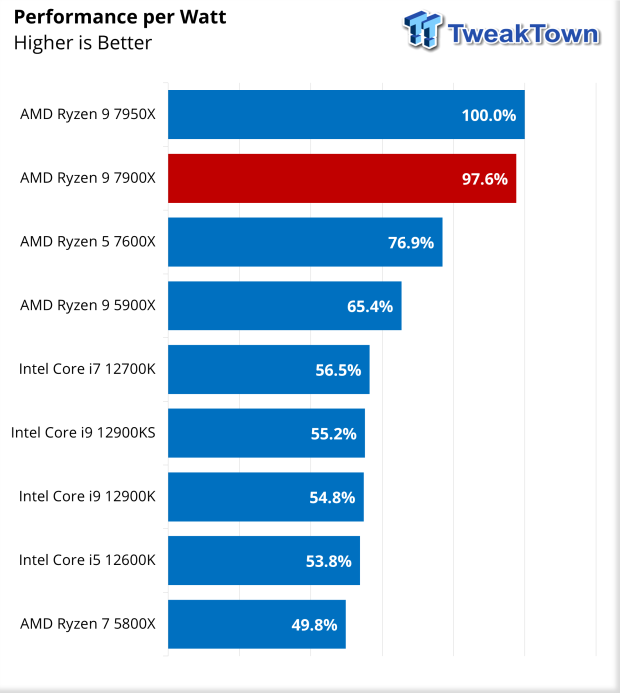 Looking at Performance per Watt, the 7950X offers the best performance per watt, with the 7900X right behind. After that, a huge fall off for the remaining CPUs. 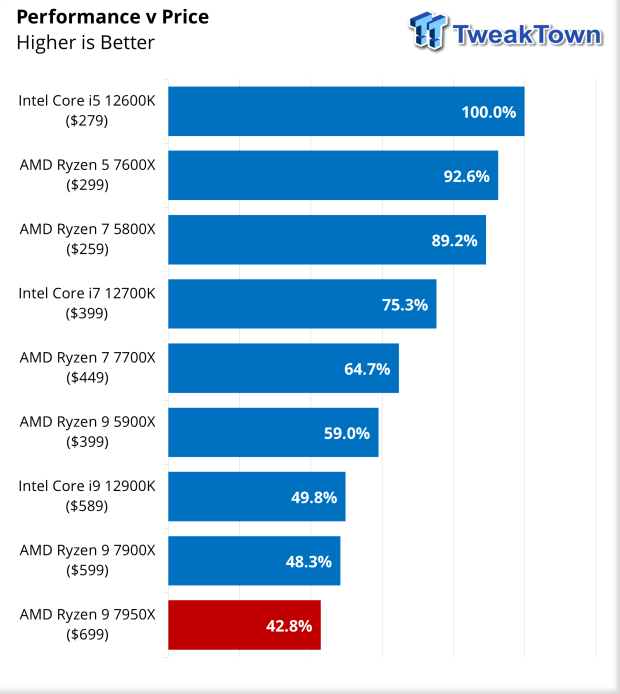 Adding cost to the equation using current market pricing as of this writing, the 7950X lands at the bottom as the worst CPU in bang for your buck. 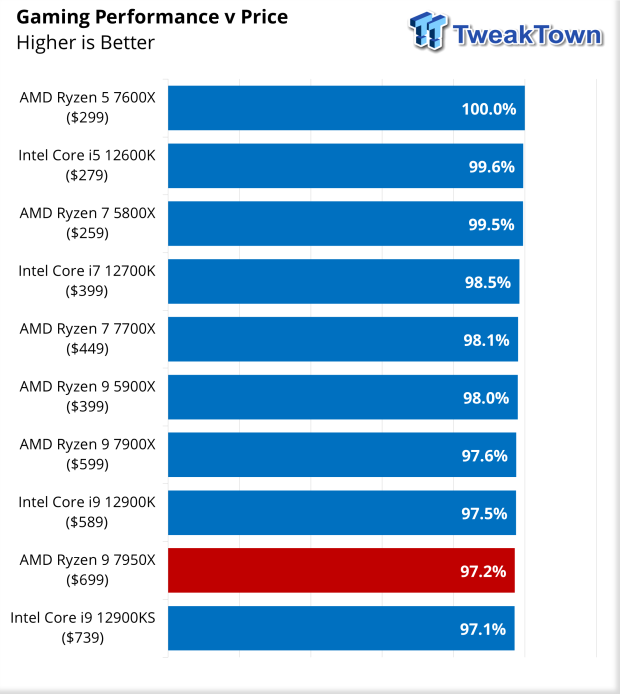 Switching the performance metric to gaming, the 7950X still isn't the best value, but it's not far behind, with all CPUs landing within a few % of each other.

The 7950X is no doubt a very strong CPU; it performed at the top of every workload, single thread because of its high boost clocks and multi-thread showed what all those cores could do. It was a bit mixed with some workloads like CrossMark, where it was under both the 7900X and 12900KS, a CPU most have seemingly forgotten about. In Procyon, the 7950X again did well, towards the top with the 12900KS.

Gaming scenarios were hit and miss; Timespy had it in the middle while testing a few games. The 7950X was at or near the top every time, including CyberPunk which showed an impressive 205FPS at 1080p. Zen 4 has excelled in power draw, which has kind of become AMD's thing now; the 7950X delivered here, too, uses just 30 watts more than the 7900X and exactly double the 7600X. CPU Thermals were fine, but again our cooling loop is overkill; a 73c peak for the 7950X probably isn't realistic for anyone on an AIO or Air.

Looking at value, Per per watt was amazing, Top of our charts at 100%, the 7900X followed just behind and switching to performance v price, using both productivity workloads along with gaming, the 7950X was near the bottom in both scenarios, really because it is overkill for gaming and its higher price tag.

While the AMD Ryzen 9 7950X processor isn't going to be the chip of choice for gamers on a budget, for creators, it offers a huge increase over previous Zen 3 chips with the downside of an entirely new platform.