The QSAN XN8012R is a business-friendly NAS that sports features once reserved for datacenters. The 18-bay NAS utilizes the resilient ZFS file system, six dedicated bays for low-latency drives, and speedy connectivity options. The QSAN XCubeNAS XN8012R is more than just a NAS we're testing for a review. This is our new NAS HDD test system that increases our drive capacity. The system also allows us to test SATA and even NVMe drives in cache roles sitting in front of disk storage.

Before we get too deep into testing and future roles, let's look at the basic specifications and the user interface. The heart of the system is Intel's Kaby Lake architecture quad-core Xeon operation at 3.3GHz. This series supports up to 64GB of system memory, although the XN812R ships with 8GB from the factory. If you utilize a large SSD cache in the storage array, you will want to maximize the DRAM capacity.

The 2.5" disk options are what make this system stand out from other systems. On the main storage side on the front of the system, you get twelve 3.5" drive bays. With modern disks, that's a speedy array already. If you want to increase performance, especially for random workloads, the system has six 2.5" bays in the back for cache or tiered storage.

You are not limited to just flash with this system, though. Two of the six bays support 2.5" 15mm z-height NVMe SSDs, and that opens the door for Intel's Optane SSDs like the 900P or the enterprise version, DC P4800X. The four other 2.5" bays use standard SATA 6Gbps, just like the twelve bays in the front. The system does not utilize SAS on any drive bay. On the back, we also found four USB 3.0 ports and a single HDMI port for additional connectivity. This is where we also found the hot-swappable redundant power supply.

Advanced Computer & Network Corporation (AC&NC) just signed a distributor agreement with QSAN to deliver products in North America. Administrators can configure and purchase XN8012R systems from AC&NC and take delivery within three days according to a recent press release. The twelve 3.5" drive sleds take up the majority of the front face of the system. QSAN used lime green accents for the system. If Kawasaki had a datacenter, it would be filled with this series. The green tips in these two images fold down to give system administrator's leverage to pull the system from the rack. On the right side, there is a power button and a UID button. The UID flashes an LED in the front and back of the system, making it easy to location in a populated rack. A network activity and status LED sit to the side of the two buttons.

Finally, there is a USB 2.0 USB port on the front just under the buttons. The system doesn't ship with rack rails from the factory. The rails add convenience in highly populated racks. On the right, we see some of the build quality and effort QSAN put into the design. Many companies would have just used two screws to secure the ear to the chassis, but QSAN used three. The company also used five screws for the fascia instead of two found on lesser systems. We divided the back of the system into three sections. The first shows the dual 250W power supplies for interruption-free redundant delivery. To the right of the PSUs is the 2.5" (SFF) bank of drive sleds. The four to the left utilize SATA 6Gbps, but the two to the right accept larger 15mm z-height drives, the common size for enterprise NMVe "U.2" SSDs.

The 4x gigabit Ethernet and USB 3.0 ports sit in the middle on the backside. This is also where the UID LED, mute, and reset button sit.

The far-right side of the NAS has the single HDMI port and provisions for half-height add-in cards. Our system shipped fully loaded with a 10-gigabit and Thunderbolt 3 (40Gbps) card installed. Inside, we found a thoughtful layout with an emphasis on airflow. The system uses a tall passive CPU cooler that gets air from the three 60mm fans that sit between the CPU and the drives. An additional fan cools the SFF drive cage. The operating system sits on a single SATA DOM, so you don't lose the system's configuration swapping drives. This also allows you to maximize the disk storage. Some companies use the main media to hold the operating system. 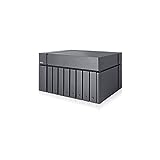