Cooler Master has kept us busy with their MASTERLIQUID and MASRTERAIR coolers over the years, and we have seen many designs cross the bench, trying to obtain that perfect blend of cooling and cost.

Looking at over half a dozen of these products, we assumed we had a handle on what the limitations to the series were, and just how far Cooler Master was willing to go with the MASTER coolers. However, what you are about to see today is a departure from many of the previously viewed MASTERAIR coolers, and even though there is a similarly named MA610P that was already part of the lineup, the latest design is nothing like it.

When it comes to designing an air cooler for a CPU, you have a few options. Down-blowing cooler is one, and have been successful for some, but most companies tend to bank on single or dual-tower designs, of which, this new cooler is of the latter category.

That being said, in most instances, when we look at the various dual-tower models, they tend to be at the top of the list in performance. The increased surface area means that noise is not an issue, as companies can opt for a pair of slower 120mm fans, rather than a single fan with a ton of airflow, and most times comes with a ton of noise as well. With the cooler we have in hand, Cooler Master took all of that into consideration, yet adds a heap of style and design to the top of the cooler, to help attract customers based on appearance and much as its performance.

In our hands is the MASTERAIR MA620P, the latest dual-tower cooler to be released from Cooler Master. Not only have they put their spin on aesthetics with chunky black plastic covers on each of the towers, and they have also incorporated some RGB flair into the fans.

The nice touch with the addition of the RGB colors is that even if you do not have an RGB headers on the motherboard, with a simple inline remote added into the mix, users can enjoy the styling, quietness, as well as having a way to make the RGB LED-lit fans blend into just about any build. For now, let's get down and dirty with what Cooler Master has offered us to give our opinion on, and see if the MASTERAIR MA620P is a worthy contender for your hard-earned dollars. Using the chart found on the product page, we can see that the MASTERAIR MA620P is also known by the MAP-D6PN-218PC-R1 model number. Using it for reference is not likely needed, as once you see this cooler, it is near impossible to confuse it with something else. Compatibility is some of the best we have seen on a cooler in a while too. On the Intel side of the fence, any sockets since, and including LGA775 are covered.

As for AMD, they do not cover socket 939, but anything since and including AM2 are compatible. Overall, including the top covers, the towers stand 165mm tall, they are 116mm wide, and from the front face of the cooler to the exhaust, it is 110.1mm deep. The tower is comprised of six 6mm heat pipes which offer direct contact with the IHS, which are then ran through two 62-fin stacks of aluminum fins. All told, with the fans included, the MA620P weighs in at 850 grams.

The fans chosen for this cooler are a pair of clear, nine-blade hubs, sporting black frames, and of course, have RGB LEDs in the hub, four in total, to deliver the colors. These fans are 120mm in size, and 25mm thick, with a range of speed from 600 to 1800 RPM.

Each fan is capable of delivering 53.4 CFM through its tower, with 1.65 mmH2O of pressure. Lifespan is quite long at 160,000 hours, with a maximum noise level of 31 dB(A), and they use 0.30A and 3.6W of power from the 12V line. The last thing noted in the chart is that a two-year warranty covers the MA620P, should any issues surface after obtaining it.

Usually, the bottom line for any purchase has to do with the price. Even if a CPU air cooler tops the charts, in today's market, asking $100 for it is not going to go over very well like it did in years gone by. With what we see on paper, and by looking at what the packaging notes, we expect this design should be able to hold its own and contend with the top end of the charts, but we will have to wait a bit to address that in fine detail.

At Amazon, Cooler Master is listed as the seller, and there, we see the $59.99 price point as well. In our opinion, the price is fair, and many dual-tower options cost much more, but keep in mind, the cost may be significant, but it is just one piece of the puzzle. 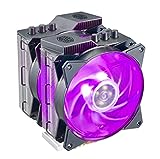