Orico does everything right with their NVMe Enclosure, offering great performance at a budget price.
Buy at Amazon

Orico has been around for the last decade designing and building a host of peripherals that include PC storage solutions, Bluetooth speakers, and power banks. In the past, we have had the opportunity to look at several enclosures from Orico, and today, we add to that list with their NVMe enclosure.

Earlier in the year, NVMe enclosures were hot ticket items, allowing users to repurpose their low capacity NVMe drives into portable SSD solutions. Plugable and MyDigitalSSD got a jump on the market each releasing their own products, and for the most part, they were equal in performance capabilities. Orico has now decided to jump in with its own take on the gum stick portable SSD form factor offering a full aluminum enclosure milled to perfection and PCB aimed at performance and cooling.

Specification of the Orico includes a 2TB drive limit using the m.2 M-Key design. Supported drives include 2230,42,60 and 80 form factors which should include all major vendor drives. This is a screw fixing design, meaning the drive is secured with a brass clamp and screw, and the enclosure is a sliding clamp design.

Compatibility includes Windows 7 and 10 along with macOS. MSRP of the Orico NVMe Enclosure comes in at $39.99 with a two-year warranty. 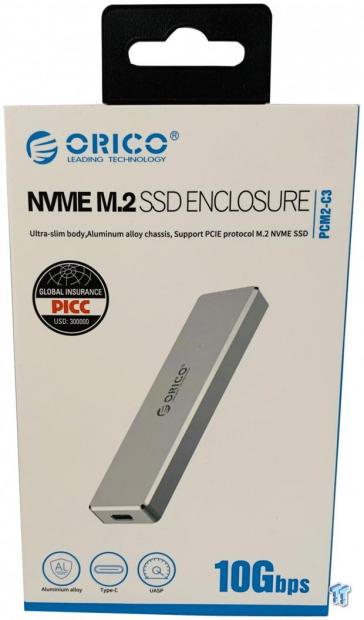 The packaging is quite simple but a little better than we have seen in the past from Orico. We have an image of the enclosure on the front with 10Gbps support noted along the bottom. 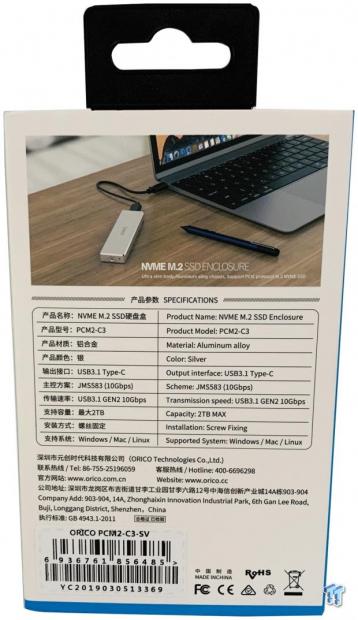 The back goes into more detail with a full specification list. 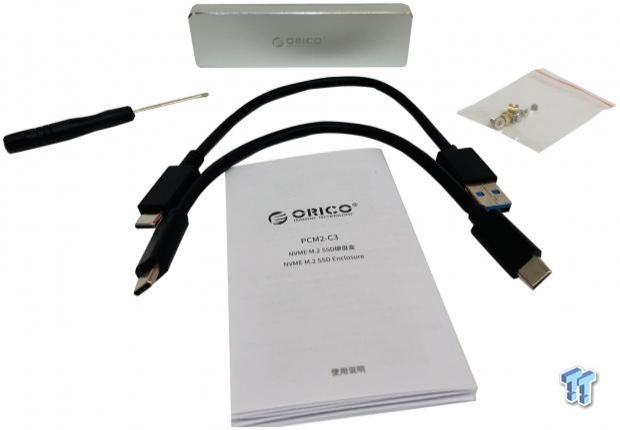 Included in the box, we have two USB cables, drive and enclosure screw and the enclosure itself. 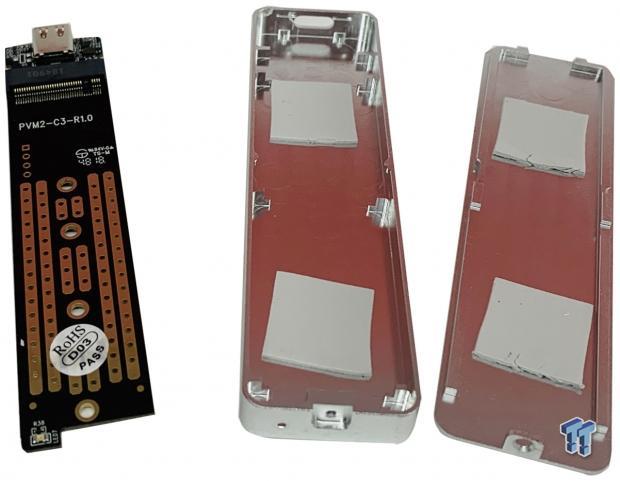 The enclosure is a two-piece milled design. It features thermal tape on each half for dissipation, and the PCB is simple with a JMicron controller.

As for performance, I was able to directly compare the Orico to the Plugable with the same drive one after another. As you can see above, the Orico was slightly better in some scenarios but overall equal to the Plugable solution. At peak, performance reached 857 MB/s read, and 797 MB/s write.

The Orico, for me, fits between the M2X and Plugable solutions as I prefer the milled aluminum and silver colorway over the black metal design of the M2X. That said both the M2X and Orico require you secure the enclosure and SSD with screws whereas the Plugable offers a full tool-less design.

As for performance, all three solutions perform the same give or take a few MB/s; I was able to reach 850/790, which both the Plugable and Orico in testing.

As for pricing, the Orico comes in at $39.99, which puts it 10$ US under the Plugable and on par with the M2X. With performance being identical across all three solutions, it could come down to warranty and aesthetics, which favors Orico with a two-year warranty and cleaner design.

Orico does everything right with their NVMe Enclosure, offering great performance at a budget price.