Icy Dock makes a ton of different products, and I use many of them in my test lab. When the company recently asked me to look over the new products ready for 2019 one stood out for its ability to solve a long lingering issue I face with several test systems. The problem solver company. That's what I consider Icy Dock. Granted, I'm a storage product reviewer, so I'm placed directly in the line of fire for storage product problems, but this is the company that gets me out of the chaos. Icy Dock is my flak jacket in the storage battle.

With the rise of M.2 and other form factor NVMe SSDs increased the capacity of my test lab. Z270 and newer chipsets from Intel perform great with NVMe, but the SATA performance dropped off slightly on everything above Z97. My consumer storage test rack features nine 4u rackmount systems but those just cover the synthetic tests. There are also two dedicated systems for the Final Fantasy: Stormblood test and another two dedicated to enterprise testing. All but four systems see SATA drives, either 2.5-inch SSDs or 3.5" HDDs. Due to the space limitations of my four racks, some of the systems are at the very top, and I need a stepladder to load drive, at least I did until now.

The Icy Dock flexiDock MB795SP-B keeps me off the stepladder. The system adds support for 2.5-inch and 3.5-inch bays right on the front of my award-winning Rosewill RSV-L4000 rackmount cases. Like many of Icy Dock's products, the flexiDock MB795SP-B is all about simplicity. There isn't anything complicated about this product, and that's the way we like it. The system holds up to two drives, one 3.5", the traditional desktop HDD size, and 2.5", the traditional notebook HDD/SSD form factor. Each port has a dedicated SATA 6Gbps port and power comes from a single SATA power connector.

The unit fits in a single 5.25" bay, what we consider the traditional optical drive bay. Unlike some of the other products, there isn't a fan on this system.

The Icy Dock flexiDock MB795SP-B sells for right around $45 on Amazon (at the time of writing). The company includes a three-year warranty against manufacturer's defects. The flexiDock MB795SP-B doesn't ship in a full-color retail package like the previous model we tested from this series. I'm not sure if some products have guaranteed placement in some stores and others don't, or if there is some other method to choosing which product gets the full-color package treatment. Either way. This model uses a simple black ink on cardboard package. When it comes to accessories users get a paper manual with details on setup and operation. The system also includes a bag of screws for mounting the flexiDock in your PC. Here is our first look at the flexiDock MB795SP-B. With the system installed the user gets an eye full of plastic, two blue LEDs when powered on, and the edge of the drives when installed. Each drive has a separate power switch with the 2.5" on the left and the 3.5" on the right.

The quality of the MB795SP-B is not as nice as many other Icy Dock products I've tested over the years. Here you can see that the LED doesn't sit perfectly square in the opening and the switch has some jiggle to it. That leads to a less tactile feel than we normally get from Icy Dock products. The outside housing is made of metal, like the other products in the flexiDock series.

Users will recognize the familiar SATA power and data plug on the left side of the enclosure. The 2.5" SATA data port is on the right side. This system doesn't support SAS drives like the previous flexiDock system we tested that supports four 2.5" drives in a single 5.25" bay. 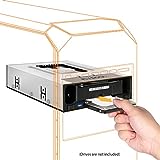