While PS4 has enjoyed a wide array of pure wireless headsets using Bluetooth, Xbox One since launch has been locked into wired headsets plugged into a chat mixer or with second gen controller, plugged into the 3.5mm jack. Of course, there are outliers, Astro has used their own base station pushing optical audio wirelessly, but chat audio always required a connection to the controller. In the last year much of that has changed as Microsoft has opened the One S and X to pure wireless headsets, so today we start with the Razer Thresher.

The Razer Thresher is a fast-connecting wireless headset that connects directly to the Xbox One, bypassing the controller or any base station completely. This solution is compatible with Windows Sonic, for virtual surround capabilities and focuses on comfort with large leatherette ear cushions with memory foam.

Compatibility includes Xbox One S and X along with Windows 10. MSRP of the Razer Thresher comes in at $149.99 with a one-year warranty. 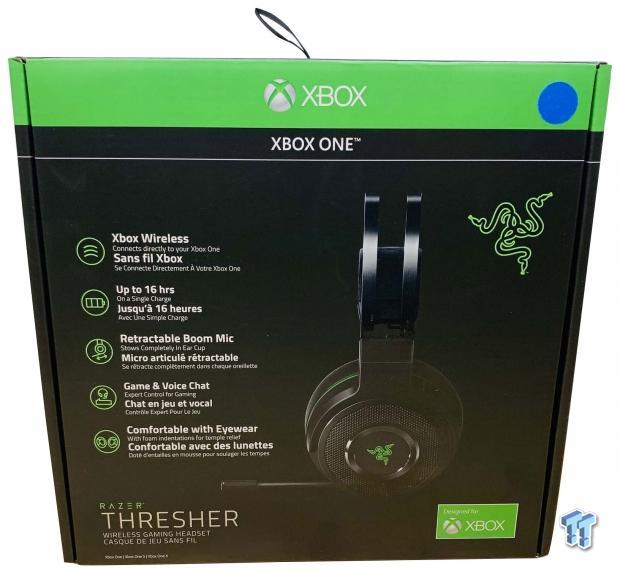 Packaging is not quite as colorful as past headsets but keeps with the Razer colorway, an image of the headset on the front with features to the left. 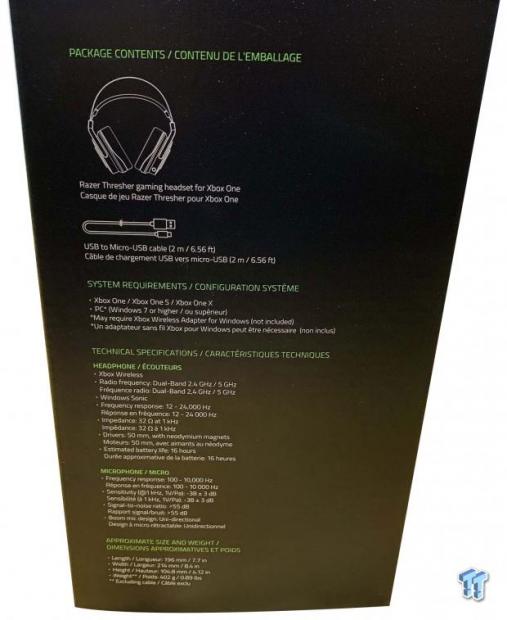 The spine of the box offers the headset specs. 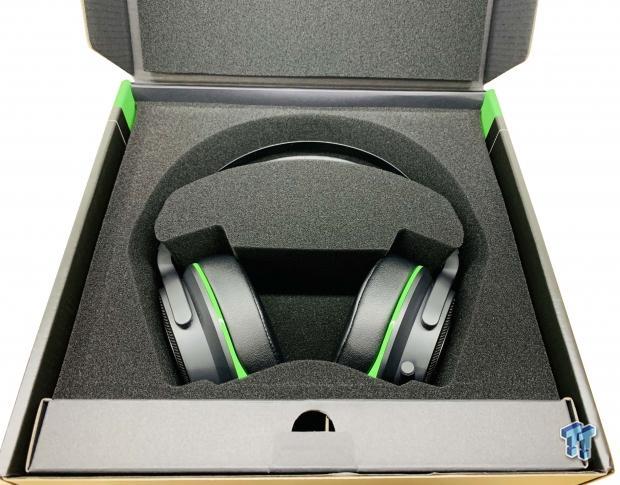 In the box, the headset is firmly placed in dense foam. 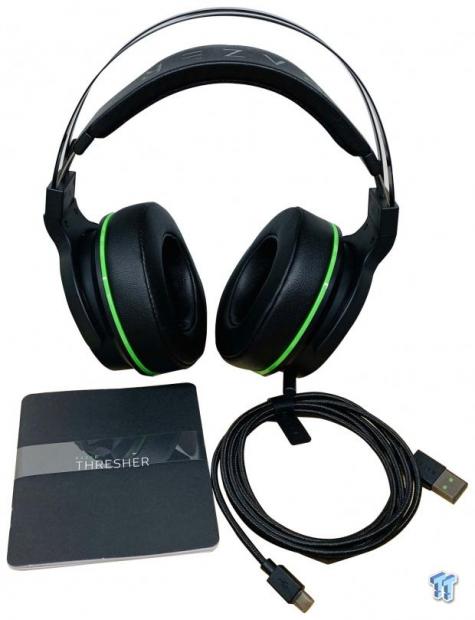 The scope of delivery includes the headset, user manual and charging cable. 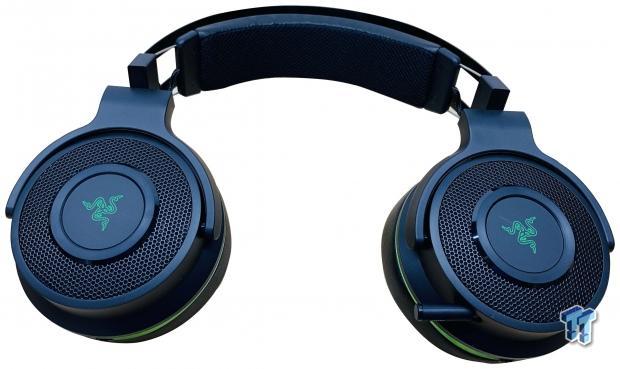 Starting with the design, the Thresher offers a lot of flexibility capable of lying flat on a table as seen above. The earcups both have Razer logos that glow green or flash when pairing with your Xbox and the retractable mic is capable of going incognito blending into the earcup or extending out nearly 5 inches. 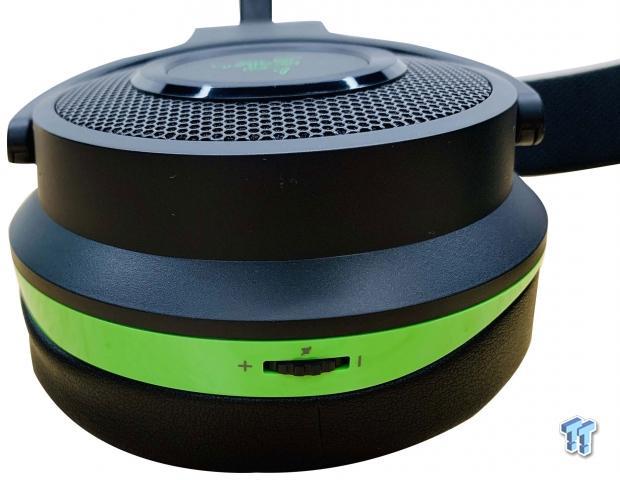 With this solution being pure wireless, each earcup takes over audio control duties that would typically be handled by the Xbox One UI. The right earcup, seen above, handles volume control. 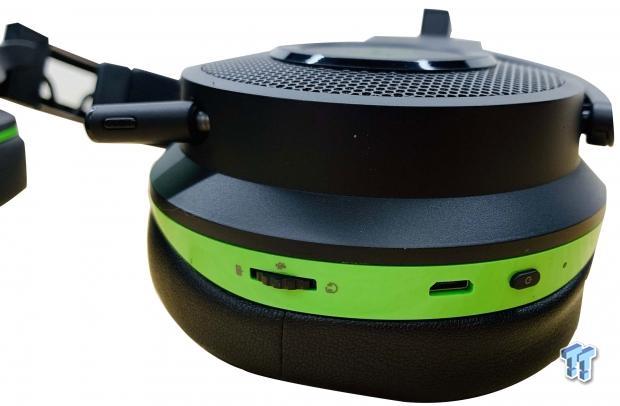 On the left earcup, we have the chat mixer, power button, and charge port. 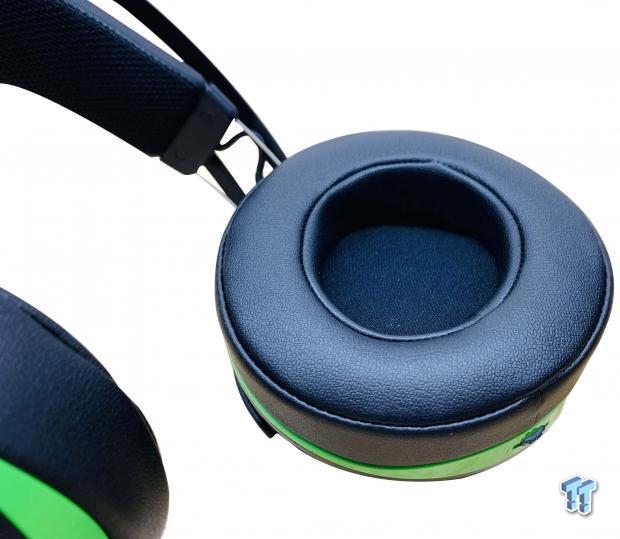 The earcups are a soft leatherette material with mesh filter at the bottom. They are quite large, so for most people, this will be an over-ear design.

I've used a lot of headsets over the years, but when I think back, the Kraken TE has been my longest-lived headset. Moving into wireless I can only hope the Thresher is half as durable. So far in the last few months, I have put a good number of hours on the Thresher, finishing AC Odyssey, RDR2 and a host of hours in Farming Simulator 19 all with the Thresher.

I can say battery life is around 12-13 hours for me but has held strong at that point, I do charge the headset every night, even if it doesn't need it. Audio quality is quite good, not as crisp and clean as the Arctis Pro reviewed a few months back but with the addition of Windows Sonic, you get a good feel of events around you and on top does have a very clean mic signal.

Comfort is leaps and bounds above anything I have used in the past for Xbox; this includes the Kraken V2 and Astro A40 along with the Plantronics RIG800. Build quality is good, but I do see a few areas to watch, the first is the earcup hinges as the extra rotation does put extra stress when taking on and off and the second is the micro-USB charge port just because it is directional.

Easily the most comfortable, easy to setup wireless headset for Xbox One and at its current MSRP, budget friendly too!

Razer Thresher for Xbox One