The Pro Endurance from Samsung is a remarkably reliable solution for those that depend on microSD storage.

MicroSD is the most widely used memory card format in the world. Everything from cameras to drones, smartphones, and tablets take advantage of it. As this format has increased in popularity, we come to a place where higher capacity, increased performance, and improved endurance are needed.

Devices like action cams and dashboard cameras are pushed through some of the harshest conditions, and one thing you don't want is your memory card to go on the fritz in the middle of an event. Situations, where the memory card is constantly being written to, can take a toll on standard solutions often causing a slowdown in performance leading to choppy video footage or losing that footage all together.

Samsung is aiming to curb this behavior with the latest in their Pro lineup, Pro Endurance. This solution is slated to provide 25x the endurance of a standard microSD solution with performance being offered at 90 MB/s read and 30 MB/s write. This solution is magnet, X-ray and waterproof spending 72 hours in seawater gaining an IPX7 rating. Adding to this Samsung states this solution can withstand temperatures ranging from -25c to 85c.

MSRP of the Samsung Pro Endurance microSD in the 128GB capacity comes in at $44.99 with a five-year warranty.

The Pro Endurance package includes an SD adapter for increased compatibility. The new colorway offers a black white and red design with capacity listed in large print on the card along with its U1 Class rating. 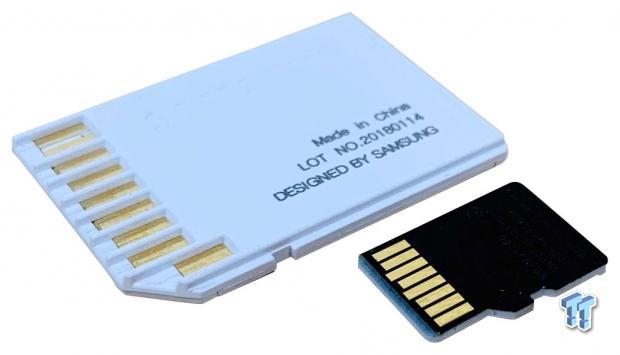 On the backside, we do have the model number along with the standard 8pin microSD layout. 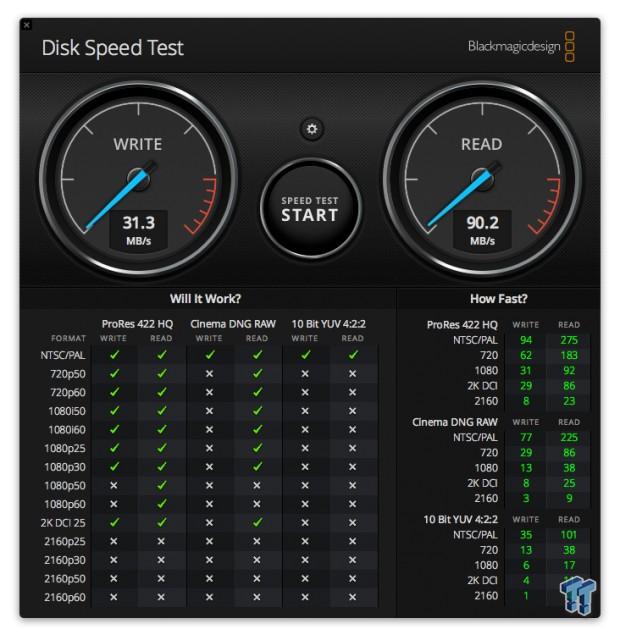 For testing, we used the included adapter running the card through Black Magic. In this case, we found 91 MB/s read and 30.3 MB/s write, right on the nose for marketing performance. 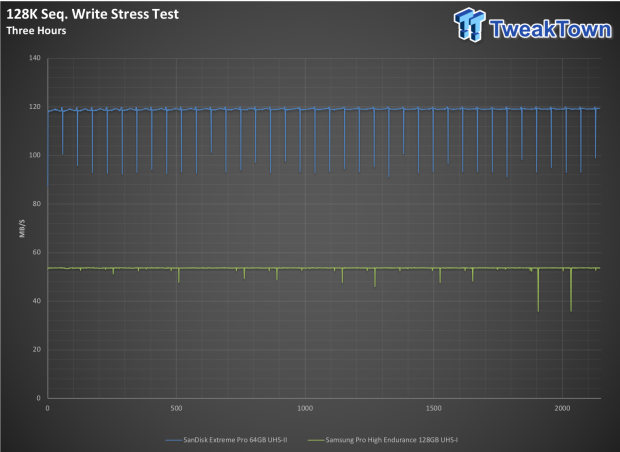 Another test I did was set up the Samsung Pro Endurance to undergo a 128K Write test for 3 hours. I used IOMeter for this test pulling performance samples every five seconds.

As you can see above, we did get slightly higher performance with IOMeter, 53 MB/s for the Pro Endurance. Along the test, we noted how stable the card was with very few performance drops. We compare this to an extremely quick SanDisk Extreme Pro that seems to have a scheduled performance drop every five minutes.

Closing this review, the Samsung Pro Endurance has been in the lab for quite some time. I have used it in several security cameras without issue until it met its final home in a recent dashcam acquisition. Build quality has seen no issue while I have had it although this winter should see some cold temperatures to put it to the test.

Performance is on par with marketing expectations 90 MB/s read and 31 MB/s write when using Black Magic and we even broke a little higher with IOMeter at 53 MB/s write, sustained.

At the current MSRP, the Samsung Pro Endurance in the 128GB capacity is about twice the price of a standard U1 solution. That said, the small increase in cost is nothing compared to increased Endurance this solution affords.

The Bottom Line: The Pro Endurance from Samsung is a remarkably reliable solution for those that depend on microSD storage.