The ThreadRipper 2920X is a great successor to the 1920X, and in some cases, it matches the 1950X. The 2970WX is a decent addition to AMD's high-end workstation CPU line up and gives users other options when it comes to AMD's quad-die ThreadRipper CPUs. 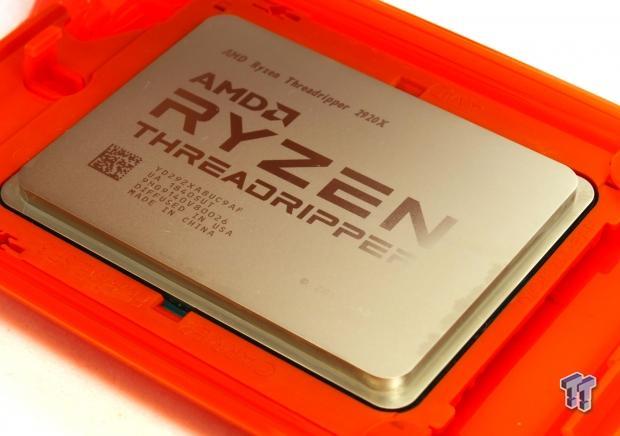 Today we will look at the other two CPUs AMD has included in their second generation of ThreadRipper CPUs, but didn't launch at the same time as the other two CPUs. The 2970WX is a 24-core 2990WX with the same high TDP and quad die design, while the 2920X is a slightly lower count 2950X, but at a much better value.

AMD's Threadripper 2970WX and 2920X are both based on the Zen+ architecture, which is just like Zen but with some optimizations made to the process (12nm). The 2920X got a 100MHz MHz boost on maximum frequency to 4.3GHz, but base stays at 3.5GHz.

The new CPU should have much better performance in mid-load scenarios specifically because of the improved Precision Boost 2 algorithm. The 2970WX has the same 250W TDP as the 2990WX, and while they have the same base and boost clock, we expect the thermal headroom from 25% fewer cores to provide some thermal and power headroom for mid-load scenarios. 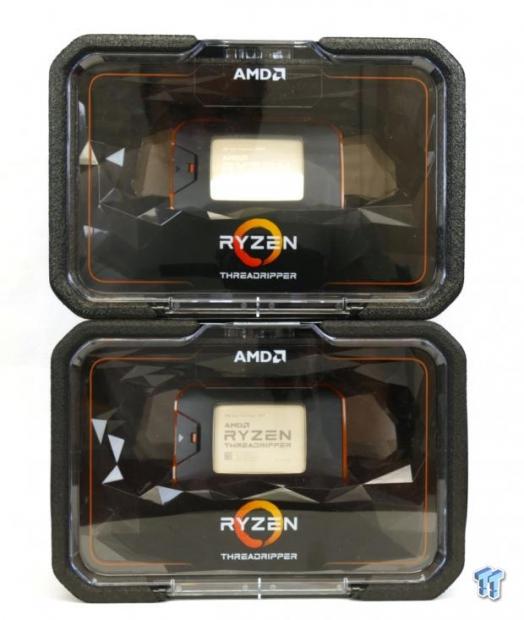 The box and packaging as the exact same as the higher-end CPUs we reviewed before. We will probably see many people mod these cool cases.

Each CPU sits in a customized tray, and the accessories are located in a small storage box. 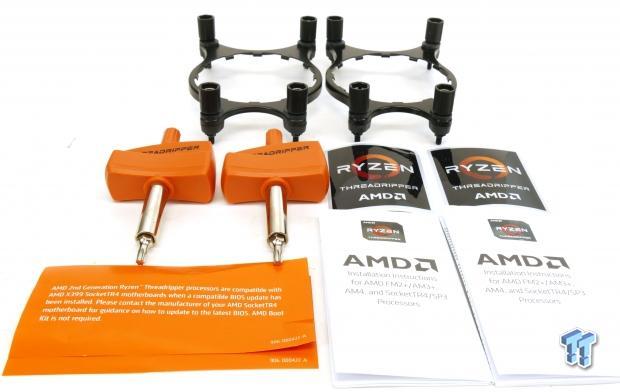 Accessories include a Torx wrench, AIO mounting bracket, manual with a sticker, larger sticker, and a warning to use Ryzen-2000 compatible motherboards/BIOS.

The top of the CPU is much like every other Ryzen ThreadRipper, and the CPU has its own holder.

On the bottom of the CPU, we can spot the golden pads, and we can see that the 2970WX has more SMDs soldered on the rear of the CPU.

All CPUs are tested with Out of the Box Performance, which means that no settings were altered, so basically default CPU and RAM speeds. VRMs on the motherboard used were actively cooled, and we used our best AIO water cooler. 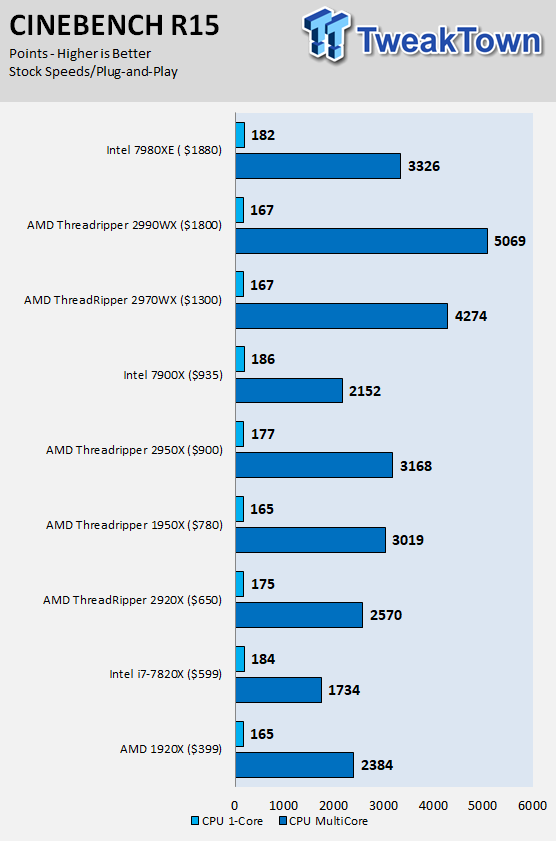 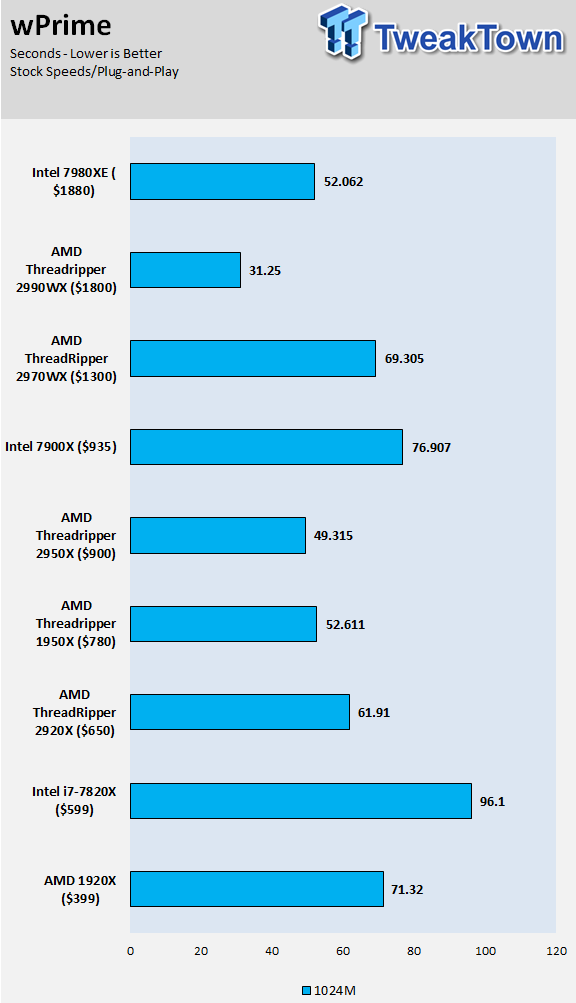 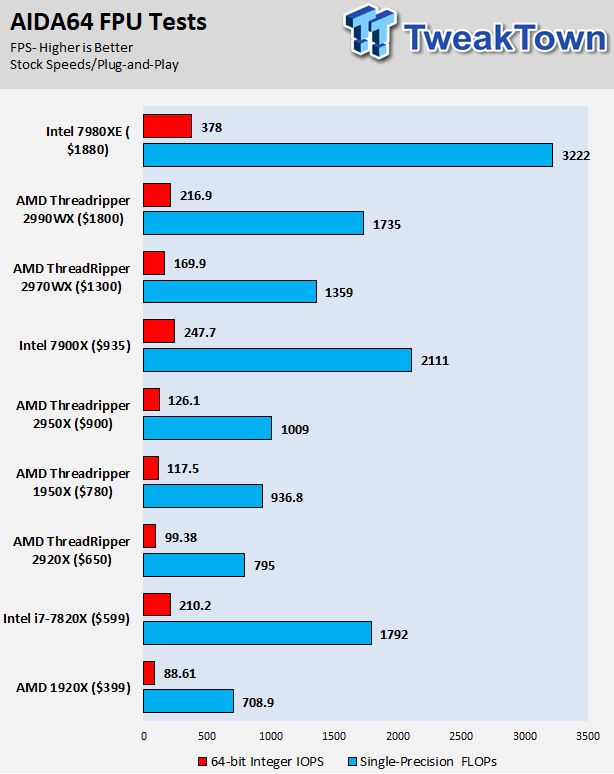 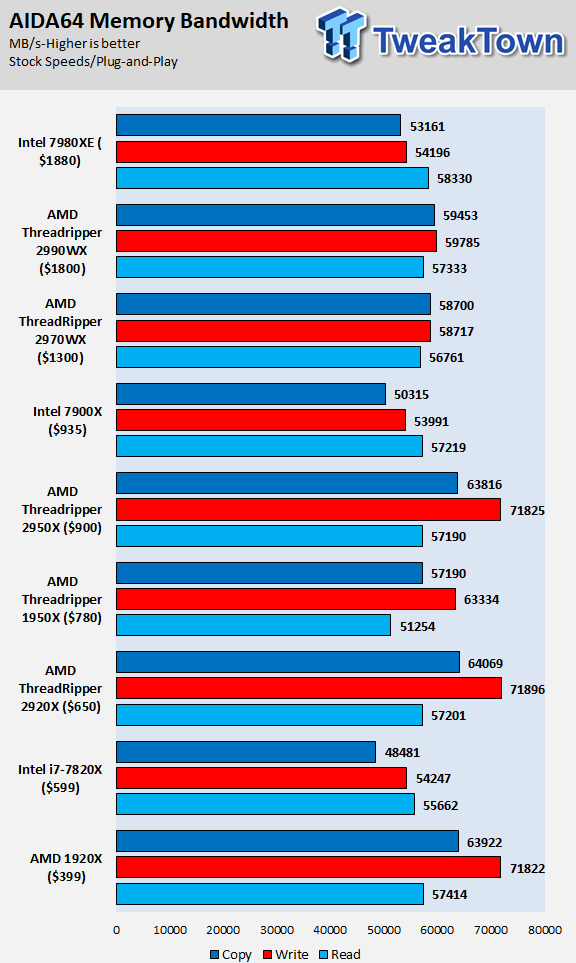 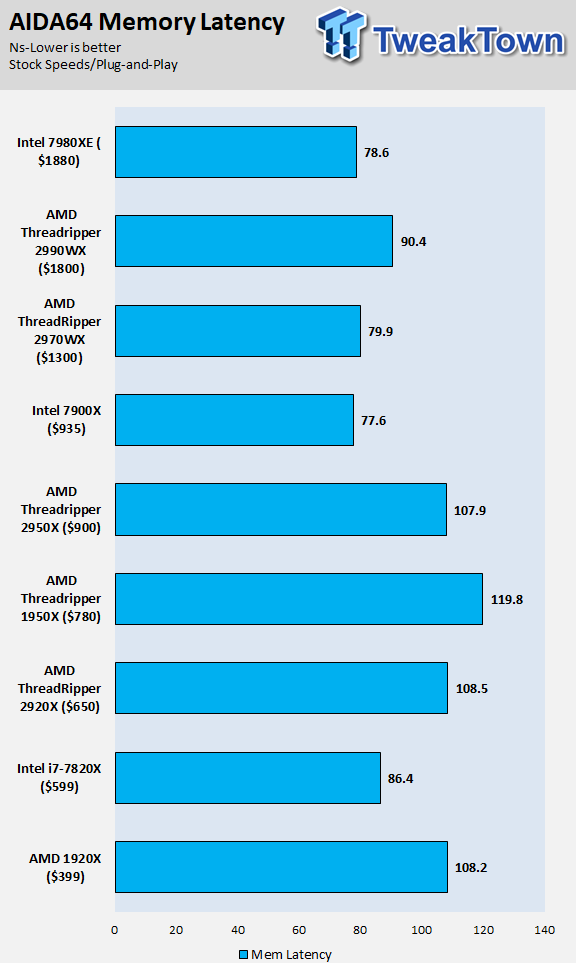 We see the two additional chips dominating the CINEBENCH scores, which is what we expected. In wPrime, we see some solid results as well as it scales with core count quite nicely. In our FPU tests we see that the solid improvements, and while the 2970WX has 75% of the cores of the 2990WX, it's not 25% slower. Memory bandwidth and latency are what we would expect based on their individual design configurations. 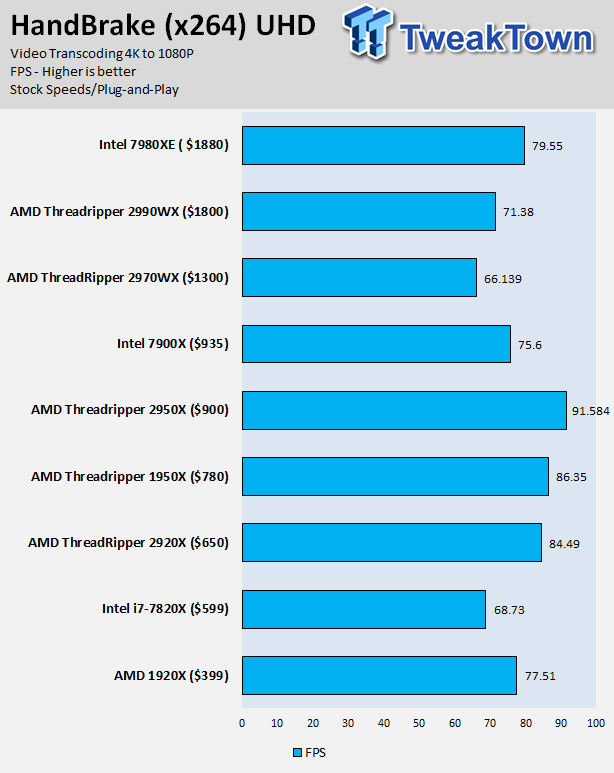 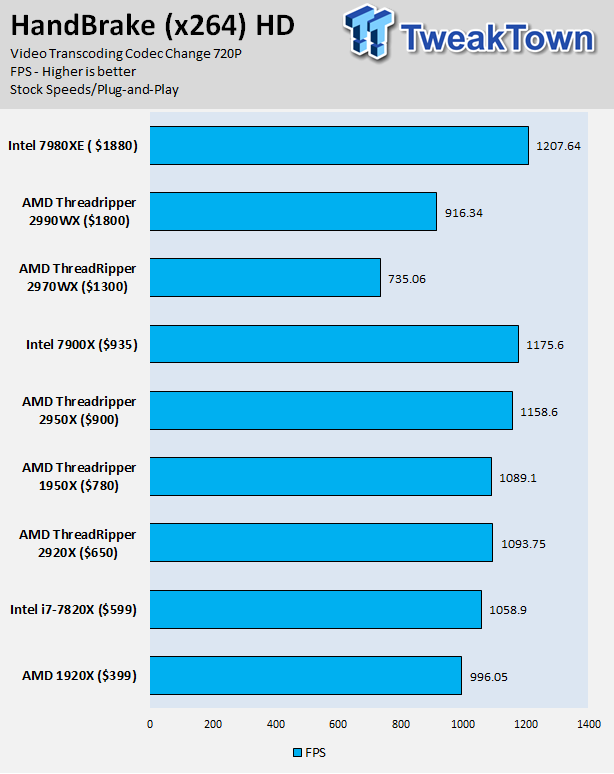 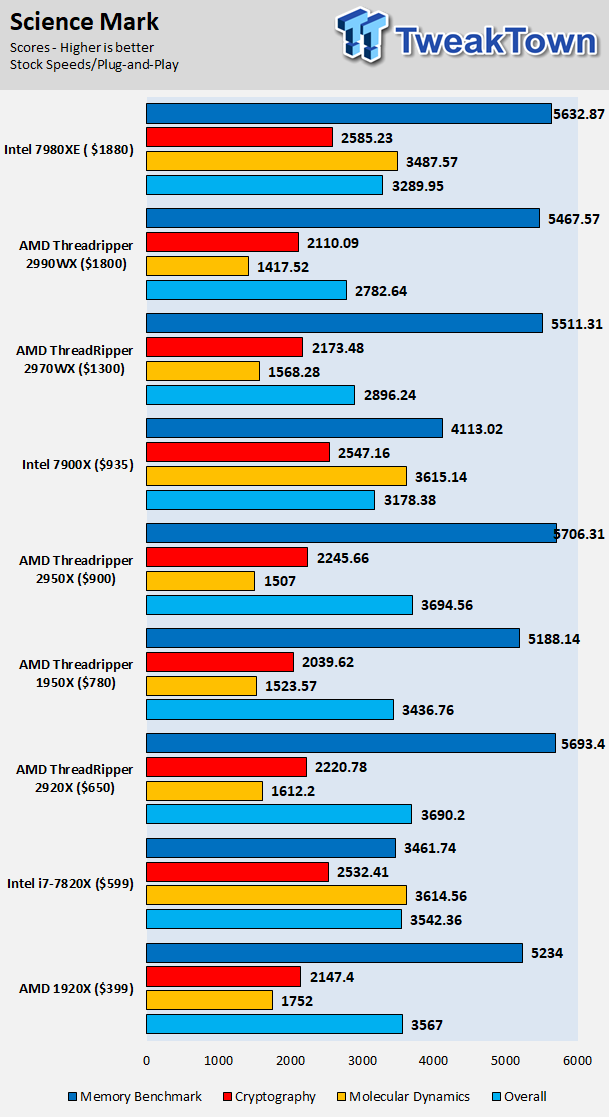 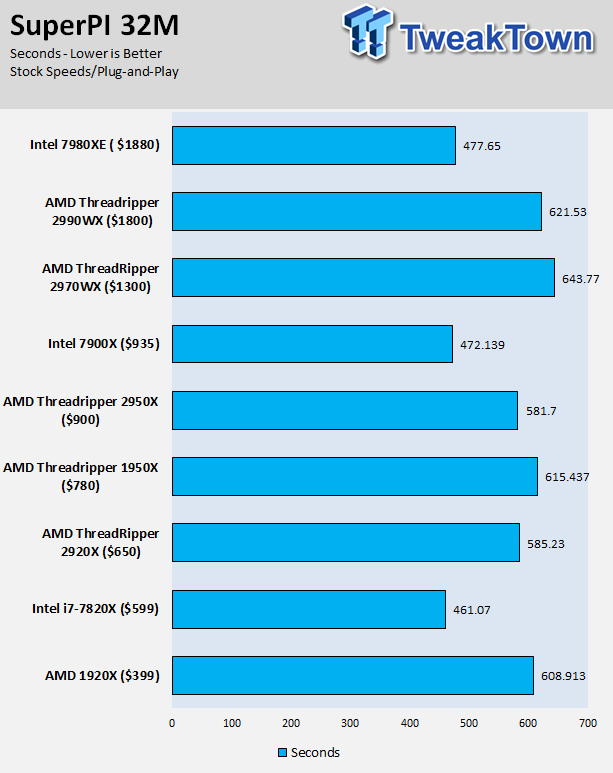 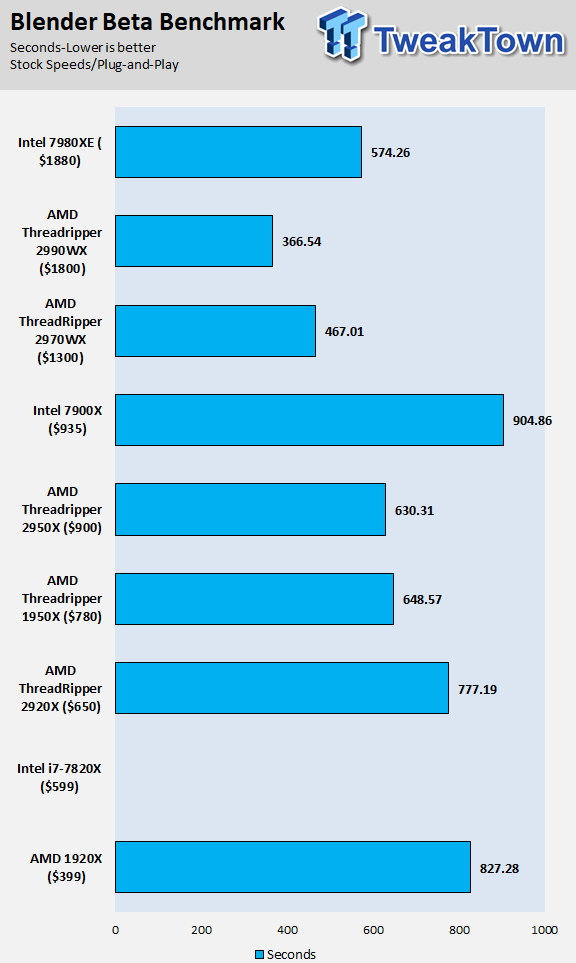 In Handbrake we see something interesting; the 2920X is getting really close to the 1950X in performance. It could be because it's a mixed workload, not all cores are used, and we see the 2920X actually overtake the 1950X in ScienceMark. SuperPI is very single core and memory latency dependent, and in this case, the 2970WX is feeling the heat. We do get some cache and memory improvements with the 2000-series processors, and the 2920X beats the 1950X in that regard in SuperPI. The 2970WX is the second best Blender benchmark result in our charts. 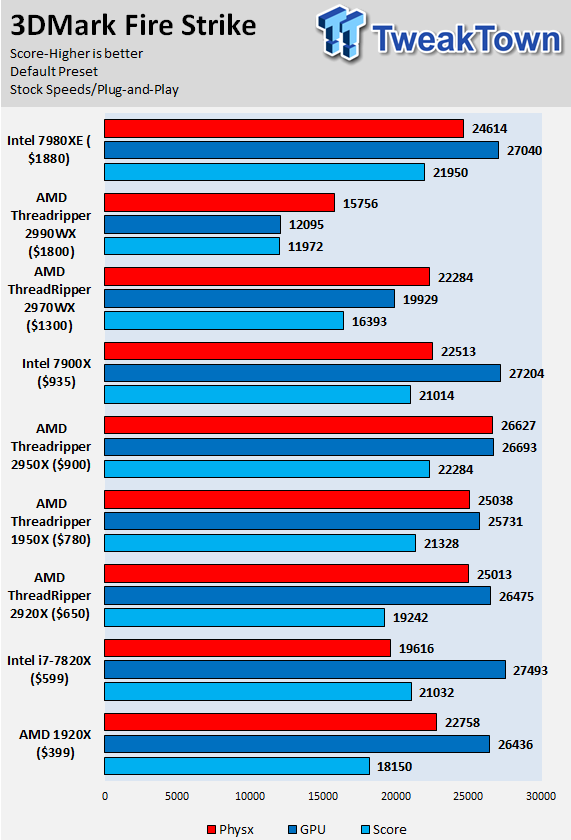 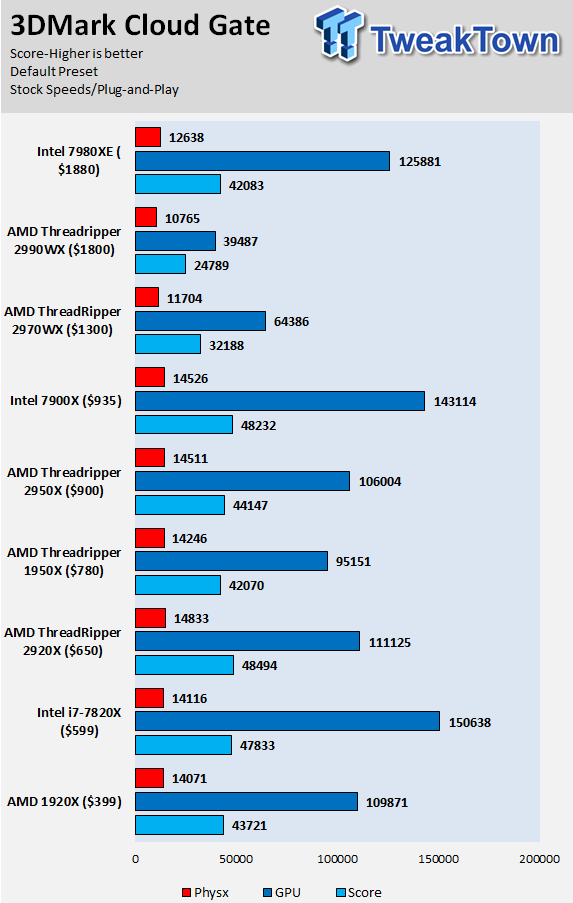 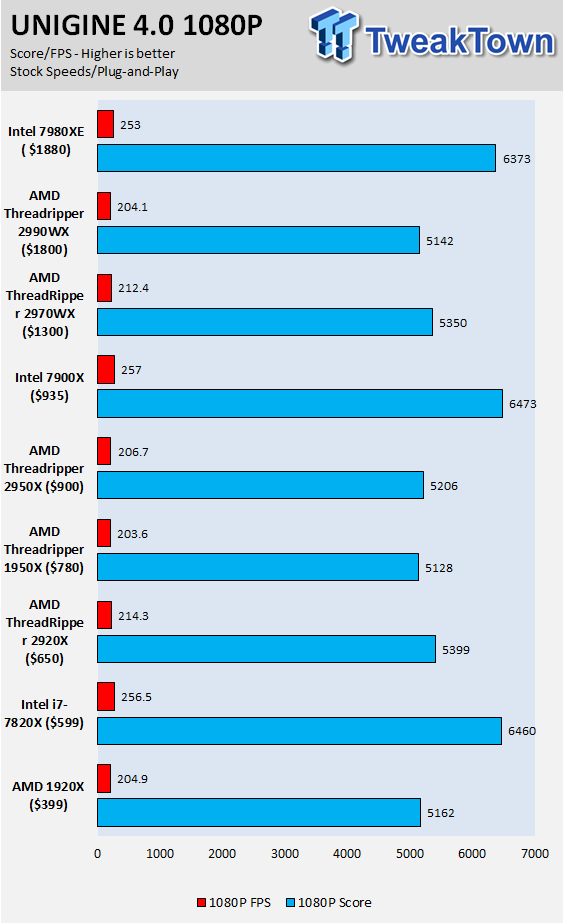 In the synthetic tests, we see the 2920X doing well compared to previous generation ThreadRipper CPUs. We see it doing much better in everything but FIreStrike than even the 1950X, hopefully, that trend keeps going into the real-world gaming tests. 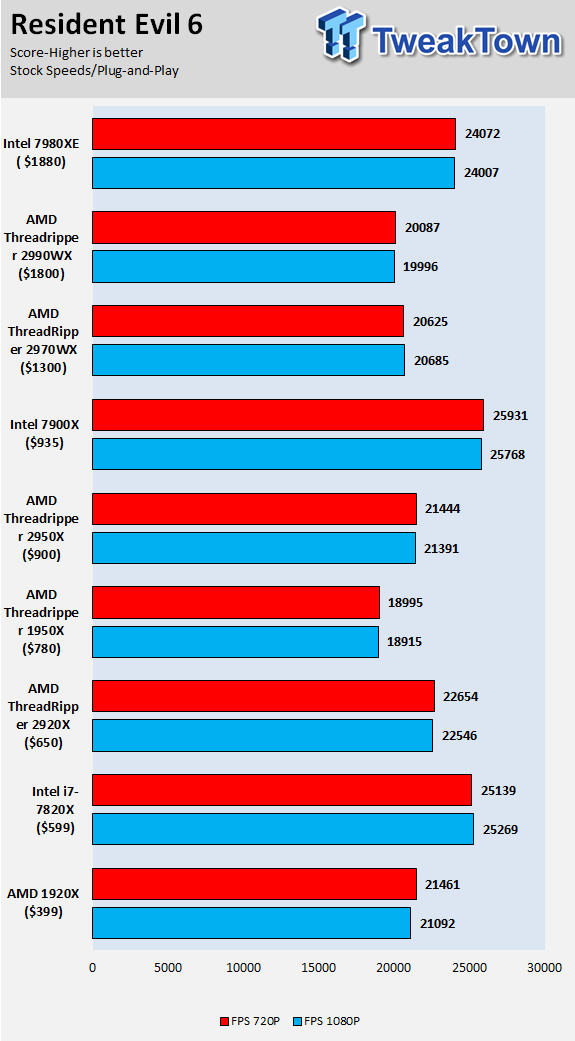 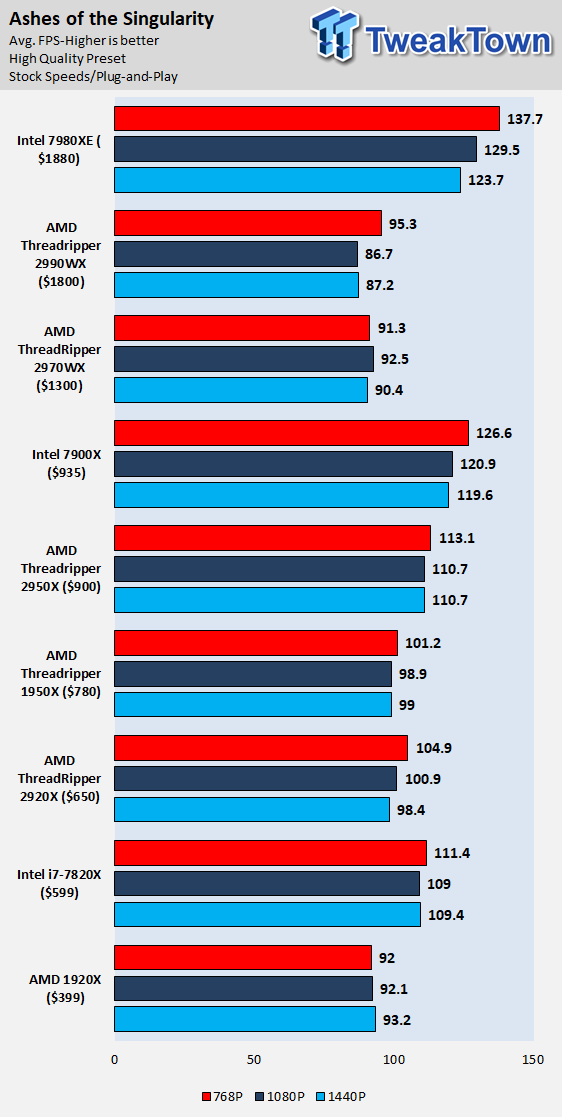 We actually see the 2970WX do better in most games than the 2990WX, and we think this has to do with thermal and current headroom (25% fewer cores)that allows Precision Boost 2 increase frequency in mixed workloads in the 2970WX higher than in the 2990WX. Games love frequency, so that could explain what we are seeing.

Rise of the Tomb Raider is our one outlier, and we think it has to do with the game loving cores as much as it loves frequency and IPC. GTA:V loves frequency, and we see the 2970WX do significantly better than the 2990WX. However, no one should buy either CPU for gaming. The 2920X is much better for gaming than the previous generation 1900 series ThreadRipper CPUs. 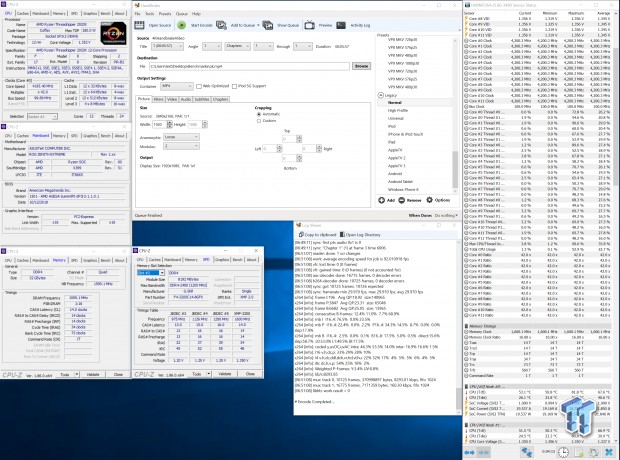 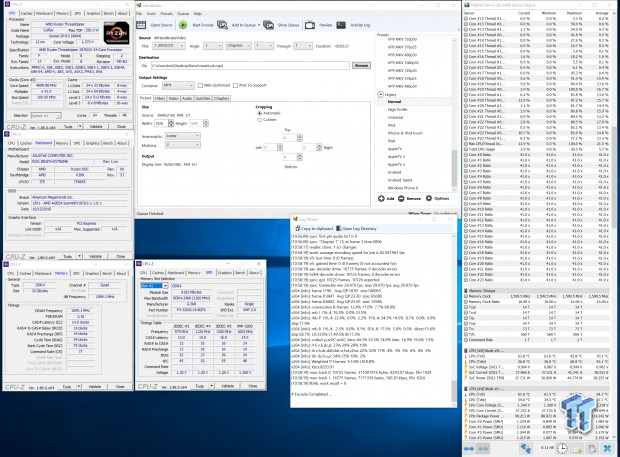 The CPUs can both overclock over 4GHz, although we only hit 4.1GHz with the 2970WX while the 2920X hit 4.2GHz. We think the 2970WX was throttling due to its lower handbrake results compared to the 2920X; it was 10FPS slower. We also saw some very high temperatures at the same voltage on the same motherboard, that's mostly due to the increased current to the increased core count, but that will also make it a much harder CPU to overclock and cool. We set 1.35v on each, LLC on auto, and we increased the current capability to 140% on our ASUS motherboard. We set memory to D.O.C.P and manually set ratios in the UEFI. 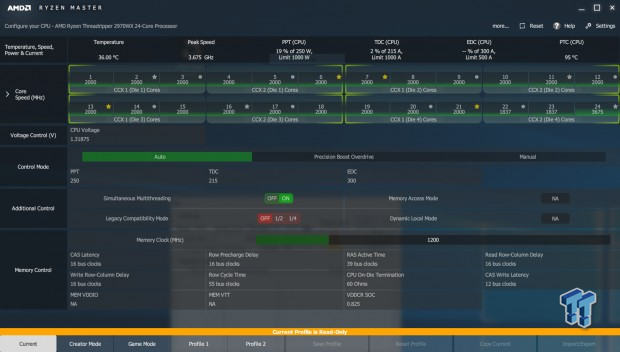 This is where you can fast forward to the final section of the review, and get a quick recap and points on the Ryzen Threadripper 2920X and 2970WX.

Moar Cores at Reasonable prices: AMD is making high core CPUs more mainstream with the 12-core 2920X; you get twelve cores for less than $700! With the 2970WX you get a very high core count CPU that scales in cost per core, and since most people don't need 32 cores, the 24 core option is a solid one.

2970WX for Specific Workloads: The 2970WX is marketed as a content creator and designer CPU, and in certain workloads, it will do quite well. It will be specific to the software program you use.

Tinker Tailor Soldier Spy: Performance Boost OverDrive, Dynamic Mode, Gamer Mode, Creator Mode, and Legacy Compatibility Mode play much like the chess pieces on the chess board in the movie. Finding the right player or mode might be a bit difficult, but in the end, the benefits are worth it for the specific task you are doing. It's nice to have the options and presets that AMD has put together.

Hot: While both CPUs run on the warmer side of things, the 2970WX can get really hot, about 10-20C hotter than the 2920X at equal frequencies and voltages. It also draws a lot more power.

X399 for 2970WX: With a 250W TDP we highly recommend a very good motherboard with a very good VRM, we suggest one of the new ones.

It's obvious that the 2970WX is a very specific CPU designed for specific workloads that will do better with more cores at higher frequencies than with quicker memory access, and those uses are not gaming. 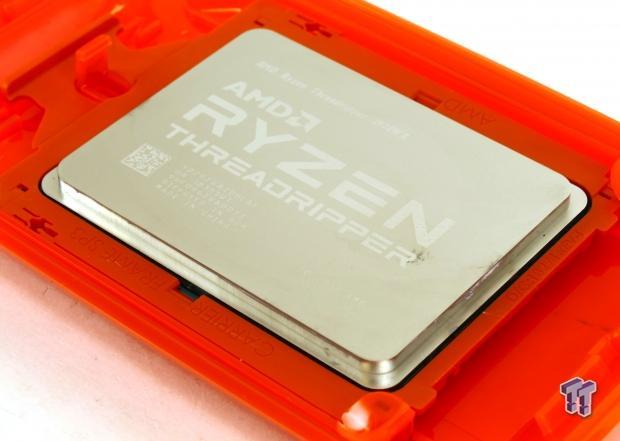 AMD is no way said that the CPU is a gaming CPU, we just put it through the ringer for the data, but if you do for some reason want to play games with it, AMD provides the ability to make it a single 6-core CPU with better memory access. On the other hand, the 2920X is marketed to the mixed-use case community, and there is a gaming mode built in for it that could improve things. The addition of the Dynamic mode that in Ryzen Master 1.5 should help with medium loads, but we didn't have time to test this feature, but we will in the future.

Overall, AMD's prices are extremely competitive, and the expansion of their HEDT line up is something to be applauded. We also applaud AMD for the improvements to the Turbo frequencies with the 2920X, leading it to make its predecessor obsolete even though it has a 100MHz higher boost frequency.

The Bottom Line: The ThreadRipper 2920X is a great successor to the 1920X, and in some cases, it matches the 1950X. The 2970WX is a decent addition to AMD's high-end workstation CPU line up and gives users other options when it comes to AMD's quad-die ThreadRipper CPUs.