Every year, spring and fall Synology launches new products into their ecosystem. Earlier in the year, the DS1618+ was launched that takes up the gap between the 1517+ from last fall and the DS1817+.

This new NAS system is a six-bay platform, designed on the latest Intel Atom architecture. The C3538 at the heart operates at 2.1GHz across four cores, 4GB of DDR4 is included in the SO-DIMM form factor but is expandable to 32GB. This unit does and is capable of taking advantage of Synology Expansion units, giving a total drive capacity of 6 for 72TB of Raw capacity internally and 10 more externally with totaling 192TB with expansion.

Connectivity of this platform is spread across four gigabit LAN ports with link aggregation and failover support. In addition, we find three USB 3.0 ports and two eSATA ports for expansion chassis. Taking things further, the DS1618+ has a single PCIe 3.0 x8 slot for add-in cards, M2D17 from Synology offers dual m.2 SATA SSD adapter for cache and M2D18 is a dual m.2 SATA/NVMe adapter, optionally you can use the slot for 10Gbe networking as well. 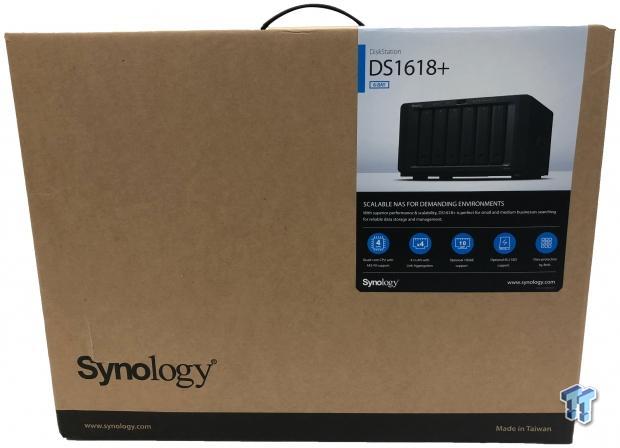 Product packaging stay true to past models. A brown box with subtle branding opens up with a sticker o the right side offering information about the NAS system. 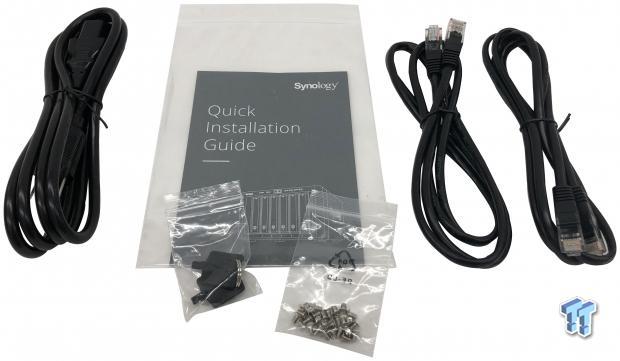 Included with the NAS, we have the power cord, ethernet cables and drive screws. 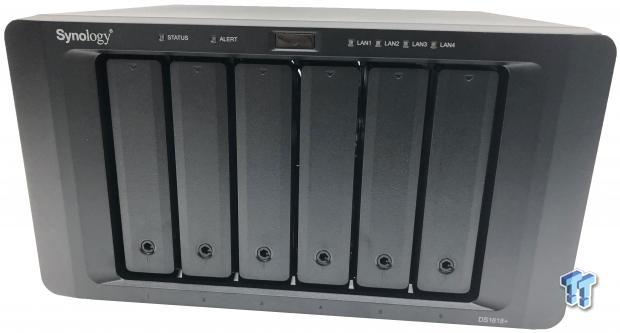 Looking at the front of the unit all six bays lay vertically across. Each drive tray offers its own LED at the top and bay number along the bottom. The power button is tucked away in the center with status and alert LEDs to the left. 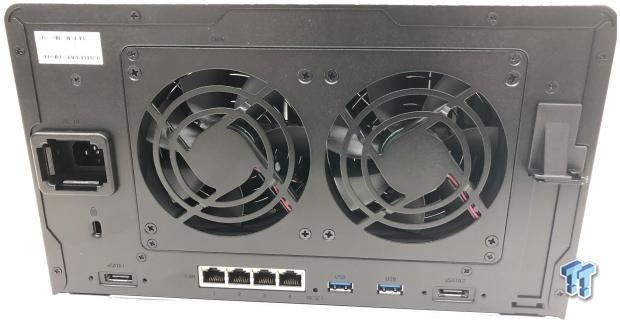 The backside houses two large cooling fans, power to the left and LAN below. Each side of the NAS is flanked with eSATA expansion ports while the right side hosts extra USB 3.0 ports.

The bottom of the NAS takes advantage of the chassis to allow for very simple memory upgrades by allowing a panel to be removed. 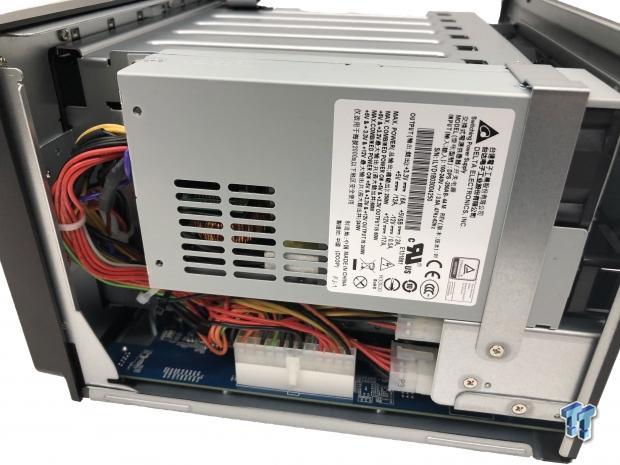 Internally, we have a Delta 250w power supply. 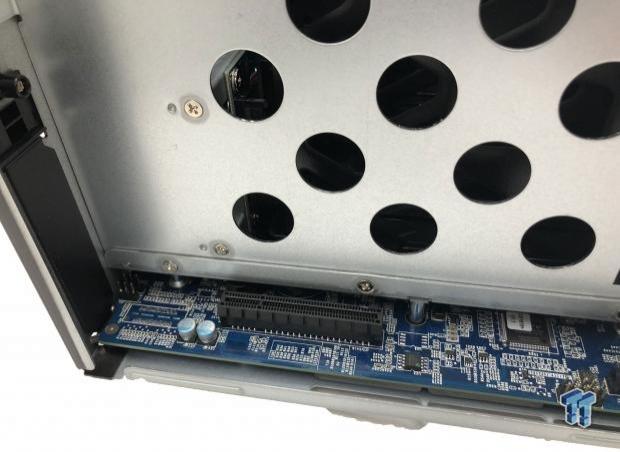 On the flip side, we have the expansion port and PCIe slot. 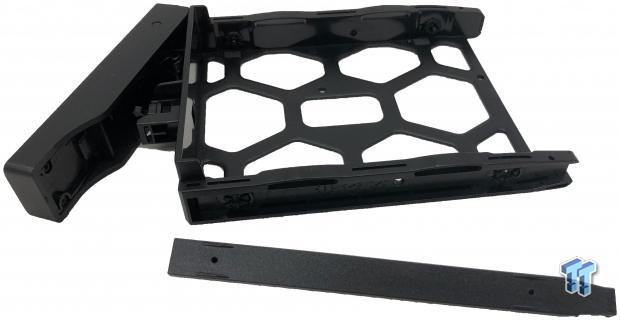 As in the past, the current tray design offers tool-less installation for 3.5" drives. 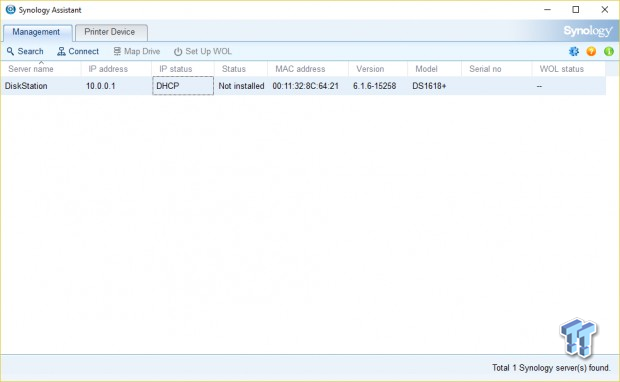 Setup is aided by using Synology Assistant. After which you can run through setup as we have done in past reviews.

The desktop hasn't changed much, for this review we are using DSM 6.2 after an update to the NAS. 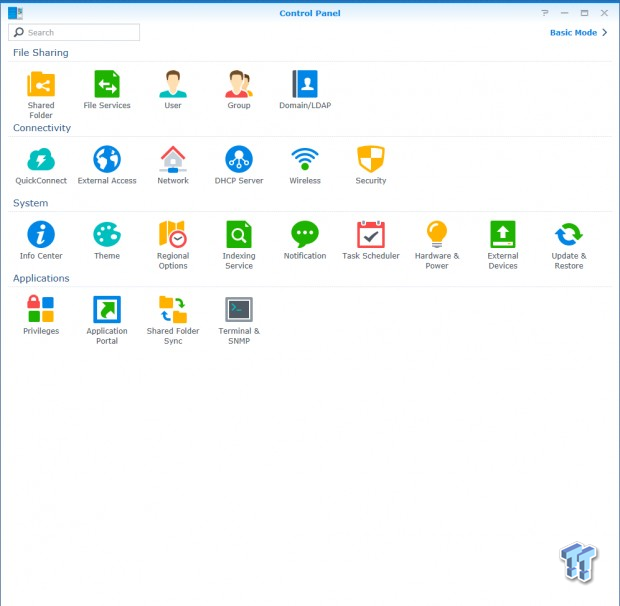 The control panel offers a single screen look at management controls broken down into categories. 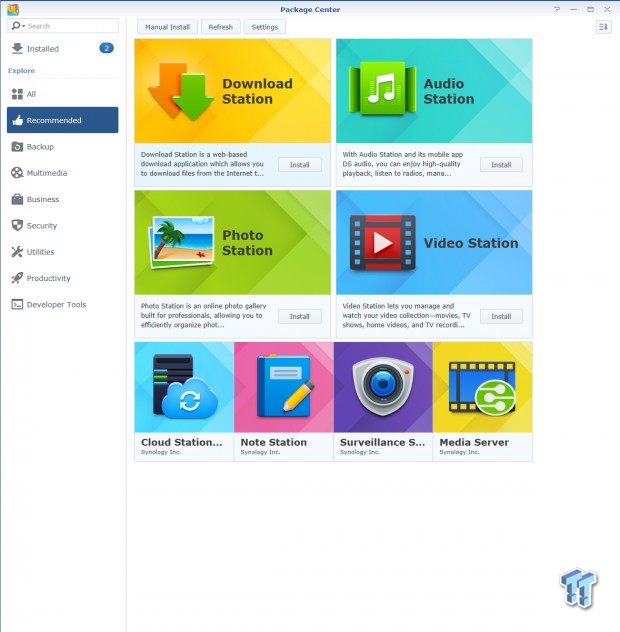 The app section continues to be updated continually but keeps with staples like download, photo and video station along with newcomers Surveillance station and cloud station. 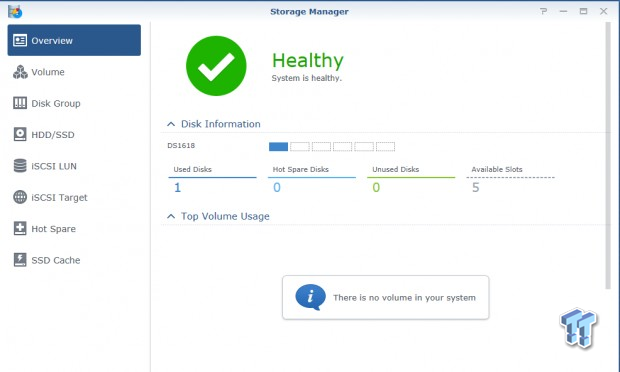 The storage manager gives access to tools to create volumes, disk groups, and iSCSI shares. You can setup SSD cache along with Hot Spare as well. 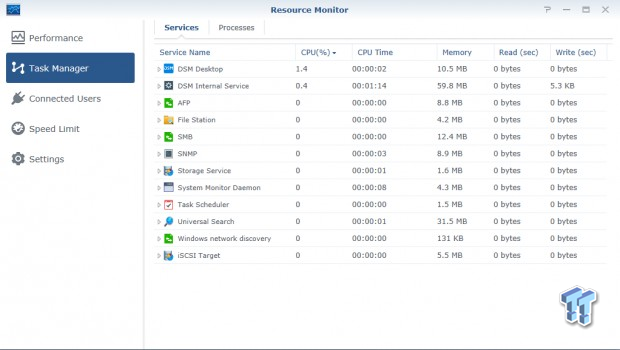 Resource Monitor shows you currently running tasks and apps while switching tabs will give access to connected users or allow you to check network speed limits. 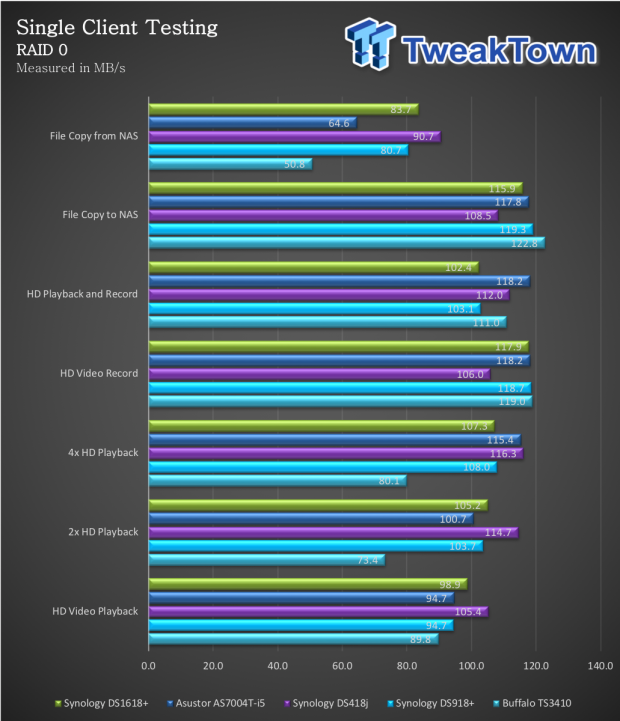 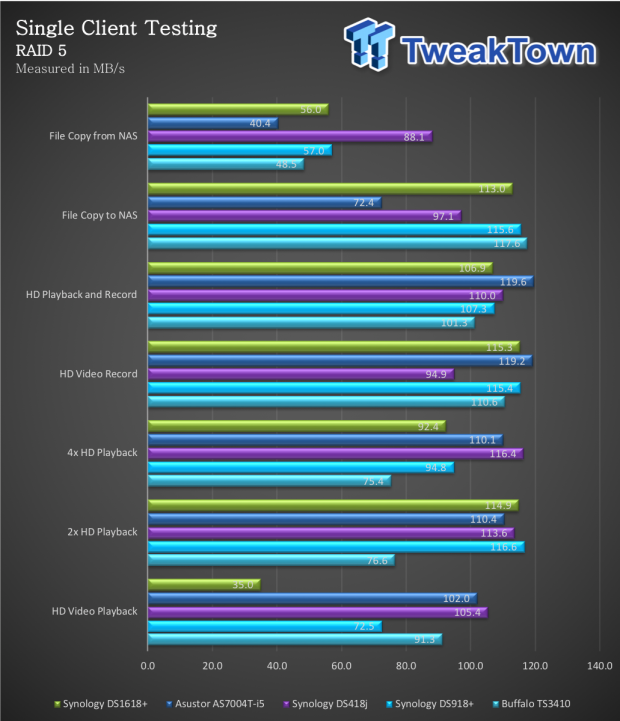 RAID 5 shows a decline in performance for file copy to the NAS, down to 56 MB/s while most of the other scenarios hold performance. 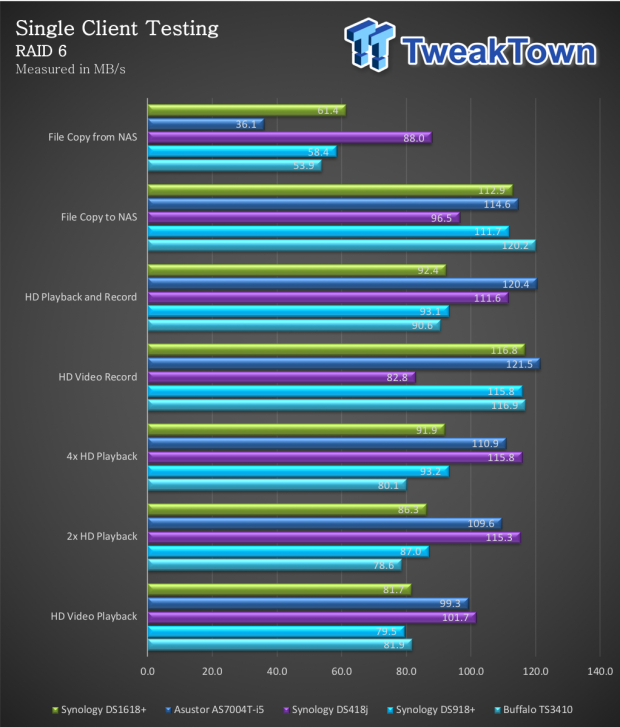 RAID 6 gets back a bit of performance in File Copy along with Playback rebounding to 81 MB/s. 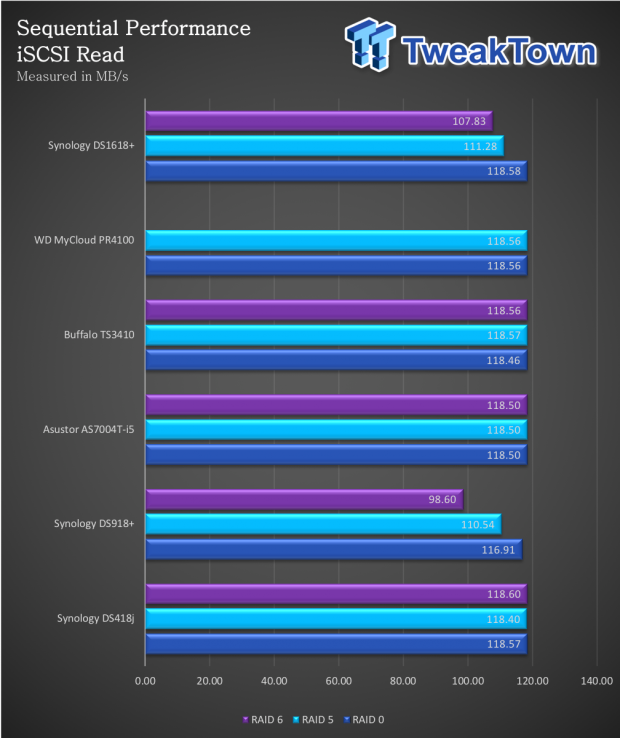 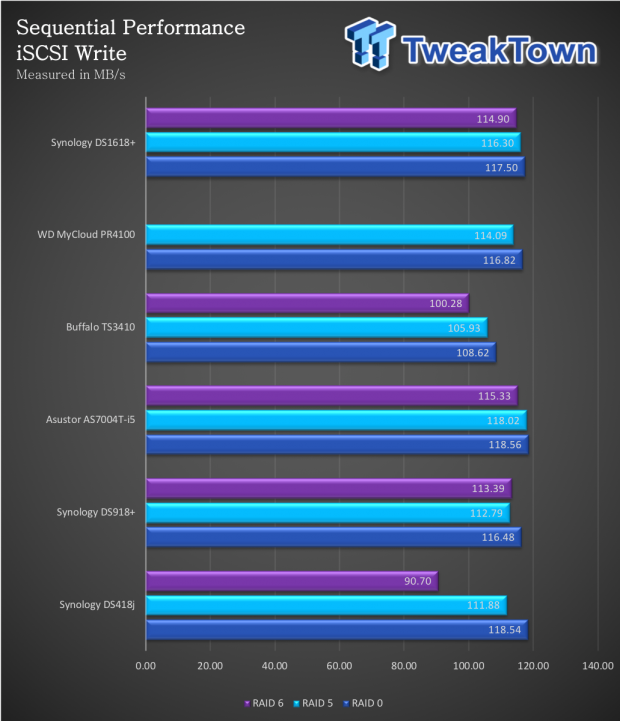 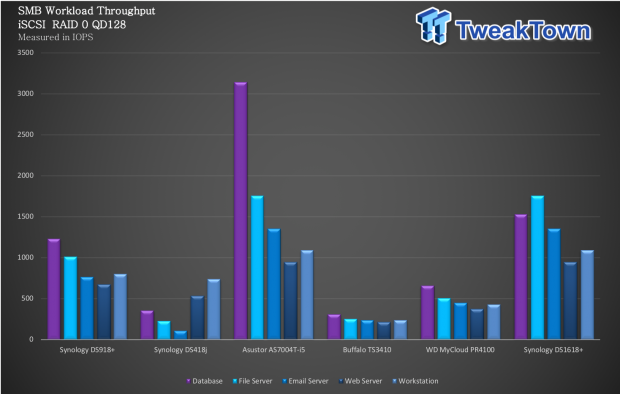 Sliding right into workload testing, we have the 1618+ at the far right of these charts and for those most part competing quite well with the 7004T. The Asustor platforms seem to always excel in database apart from that, Synology offers equal performance with RAID 0. 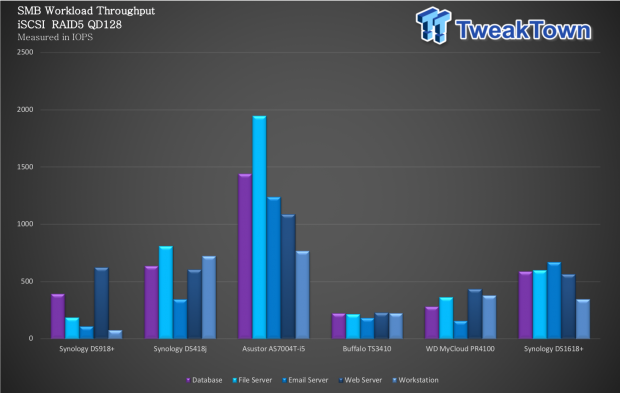 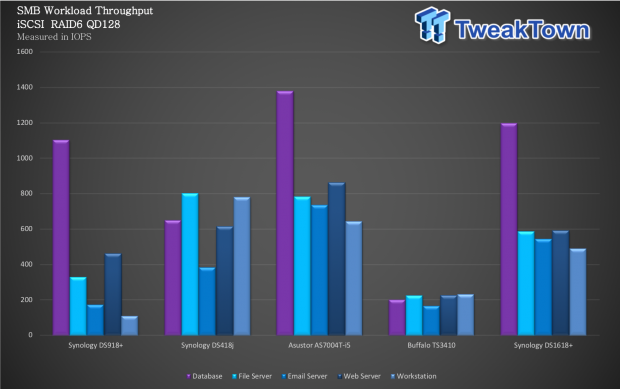 Moving to RAID 6, things turn around and the 1618+ lands somewhere between the power of the 418j and 7004T from Asustor.

The DS1618+ is a NAS aimed to fill the 6-bay gap in Synology's portfolio. Build quality is certainly up to par for a DS+ platform as it follows the same enclosure design we have seen in the past along with being user friendly for memory upgrades. Tool less drive bays remain a staple with the DS1618+ and connectivity options haven't changed if you are coming from the 1517+ or 1817+. Actually, it appears all that has changed moving into this new platform is the bump to the latest Intel Atom and 4GB of memory is now default over 2GB in past systems, and of course drive bays.

Performance was on par with expectations in nearly every category, we did see some oddball moments when testing RAID 5 in single Client and Workloads but overall the 1618+ performed as expected. Single Client we found peak numbers for the most part in RAID 0. Playback, Record and File Copy to NAS reached 98, 117 and 115 MB/s respectively and moving to RAID 6 we found similar performance in record and file copy. Sequential file performance saw only small losses when moving between RAID modes with the peak being 118 MB/s and the lowest 107 MB/s.

DSM 6.2 is an absolute great platform to work with, its easily my favorite platform with full app access and they are continually improving it with new features alongside a pretty active community.

Overall, for me the 1618+ is a solid NAS platform with the latest features but its hard to recommend over the DS1817 that's just $50 USD more with dual 10Gbe out of the box.

The Bottom Line: For those in the market for a 6-bay platform, the latest from Synology doesn't dissapoint as the 1618+ offers the latest technology with plenty of expansion capability.