The Venus is a work in progress for Mantiz. It has great features with the USB 3.0, SATA, and Gbe add-ons, but the entire unit as a whole needs refined to be worth your hard earned dollars.

Before I went looking for Thunderbolt 3 GPU enclosures, I had no idea who Mantiz was or what products they had. It seems they have been around for nearly a decade and while their product portfolio includes two docks, Zeus and Atlas, the MZ-02 Venus we have in-house is their flagship offering.

The Mantiz Venus shares a full aluminum design coming in at 163x330x215mm and is capable of holding full height, full length and double-wide graphics cards with ease. A 550W power supply is installed and included with this unit which features Thunderbolt 3 technology for connectivity. Additional features offered include five USB 3.0 ports, internal SATA 6G connection, and gigabit ethernet.

GPU compatibility allows you to use any GPU up to 375W with this unit while at the same time providing 87W of power to your notebook, ultrabook, or MacBook. The MSRP comes in at $389.99 with a 90-day warranty. 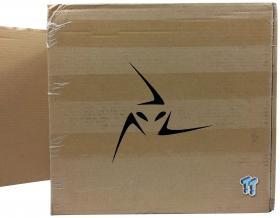 Packaging is very basic, with a Mantiz logo on the brown box. 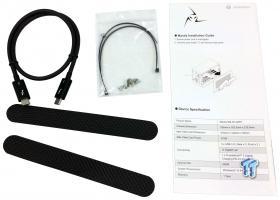 Diving in, we get a Thunderbolt 3 cable, rubber feet, and zip ties with the unit. 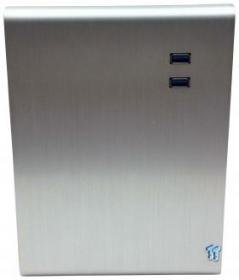 The front of the unit is clean brushed aluminum. Two USB 3.0 ports add functionality at the top right. 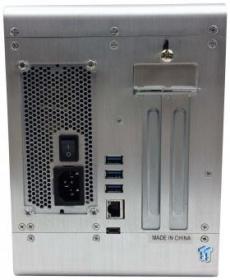 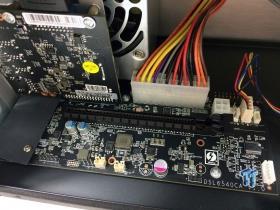 The daughterboard for the Venus features a full PCIe 16 slot with additional power capability if needed. The board to the left houses the Thunderbolt 3, USB 3.0, and SATA controllers. 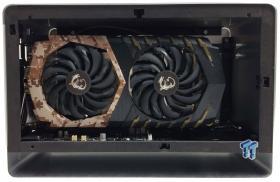 As you can see, even with this card being full length and double wide, it does fit inside the Venus without much issue. I did have to angle it in to attach the power connector, but otherwise, no problems were faced.

Testing is done with an Alienware 15 R3; it's the same machine we use for all Thunderbolt 3 reviews and includes a Kaby Lake i5 and GTX 1060 6G onboard. The focus here is to see what kind of performance we gain or lose by going external with the GPU when compared to an onboard GTX 1060 6G. 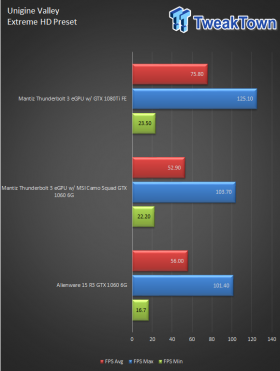 In addition to the MSI GTX 1060, I had my GTX 1080 Ti outside of its system as I prepare to upgrade my Intel-based test machine in the coming months, so I tossed that into the Mantiz Venus as well for some testing. As you can see in the chart above, our Alienware machine pulled in an average of 56 FPS in Valley while using the MSI card externally, we grabbed 52 FPS, and the 1080 Ti landed at 75 FPS. 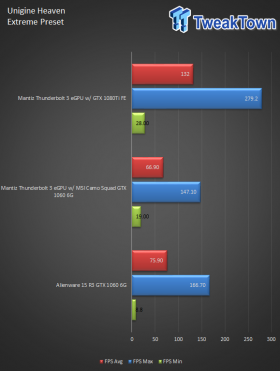 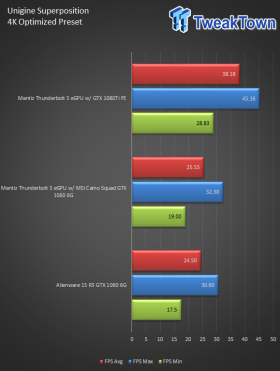 Superposition is the latest benchmark from Unigine, and with that, we used the 4K optimized preset for testing. The AW15 brought in 24.5 FPS with the MSI card not far behind at 25 FPS. The 1080 Ti installed in the Mantiz Venus brought in the highest score at 38 FPS. 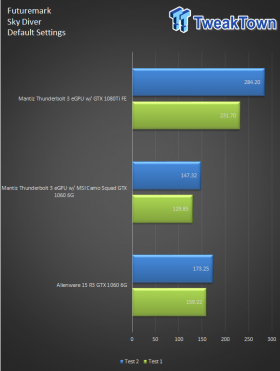 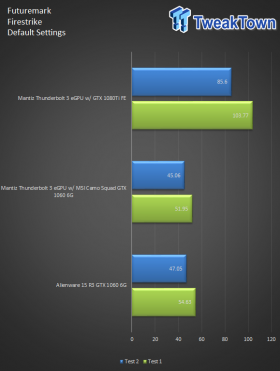 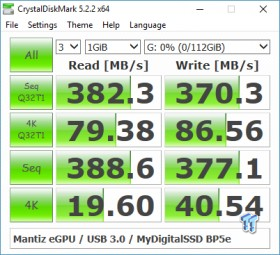 Moving over to USB 3.0 performance, we have an average controller bringing in 382 MB/s read and 370 MB/s write. 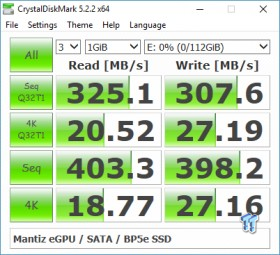 The SATA 6G performance wasn't quite up to par and is clearly being controlled by the USB 3.0 bus with a bridge chip.

With the Mantiz being only my second eGPU enclosure, it does have some firsts. I do like the aluminum design, although it could use refinement to knock down the sharp edges and round some corners, so it doesn't look so rough around connectivity ports. The power supply did prove to be ample but again it appears to be quite cheap and I would certainly like to see something more proven in these types of devices if consumers are going to stick an $800 GPU in it.

Performance of the unit was quite good. At its peak, we saw solid performance from our 1080 Ti and the focus on performance lost over Thunderbolt 3 showed us its really between 5 and 10 FPS at maximum. USB 3.0 performance was ample for many of us at 382 MB/s read and 370 MB/s write. I would have liked to see more out of SATA but that too did bring in 325 MB/s read and 307 MB/s write. I didn't make a chart for the Gigabit Ethernet but can say that too shares bandwidth with the five USB 3.0 ports, so performance peaked around 400 Mbps or half a gigabit.

I did enjoy the Mantiz Venus despite some of its shortcomings. I like the idea of having the extra USB 3.0 ports, the gigabit ethernet, and extra internal SATA, especially for VR users that don't have a full desktop build available.

The Bottom Line: The Venus is a work in progress for Mantiz. It has great features with the USB 3.0, SATA, and Gbe add-ons, but the entire unit as a whole needs refined to be worth your hard earned dollars.