Corsair's LL140 RGB fans are amazing to see in action, and will deliver customization to the nth degree to suit anyone's needs! However, the kits are costly, and we do wish there was more airflow to go with all the sexiness.

We at TweakTown are starting an endeavor to deliver an overview of the latest trends in fans. Before this, we passed on all sorts of fan samples, as we did not, and still do not, have any scientific measuring devices to extrapolate any data from, or to verify the specifications offered are indeed as accurate as possible. The reason we are now taking on this topic is that fans have made a massive leap from just hard plastic frames. Some with LEDs and some without, into a market where the fans are not only an addition to cooling. Fans have made it into the realm of a "complete package" where it is not just a cooling device, but something that adds RGB LED lighting, as well as some delivering various modes of LED control to take any chassis or CPU cooler to the next level.

With that being said, our first foray into such matters is with the newest fans from Corsair, one part of the new Dual Light Loop Series of fans. The idea behind such fans is to deliver performance and silence at the same time, but also taking it a step further, giving customers some of the best RGB LED control built right into it. Corsair has designs these Dual Light Loop Fans with a total of sixteen LEDs, many around the edge, and a few in the hub, and with connections made to proprietary devices, the visuals that these fans will provide is unmatched at this time. Some have come close in the past, but Corsair has upped the fan game with this product.

As of right now, we see that there are 120mm and 140mm solutions offered, and as part of the lineup, we have been sent the LL140 RGB 140mm Dual Light Loop RGB LED Fan 2-Pack kit. Whether opting for 120mm fans or 140mm ones, you will need to start with either the dual 140mm kit or the triple 120mm kits, as these packs are shipped with the Lighting Node Pro and the RGB Lighting Hub, which is not available in the single fan packaging. However, you are not stuck with just two or three fans; you can take a single kit, and maximize the cooling and aesthetics with up to six fans in total per node. Of course, to try to simplify things for the end-user, all of the LED control is handled through Corsair LINK software, and we will even be providing a video of what is possible with such an advanced RGB Fan. 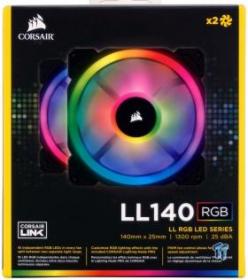 The packaging is typical of the Corsair products with the black background and bright yellow accents. On it, we see a pair of LL140 RGB fans, and in the top-right corner is confirmation that there are two fans in this box. Across the bottom we also see a notation to Corsair LINK software, we are given the dimensions, speed, and noise of the fan, and in the fine print, and Corsair mentions the sixteen LEDs split into two light loops to deliver a spectacular show of LED lighting. 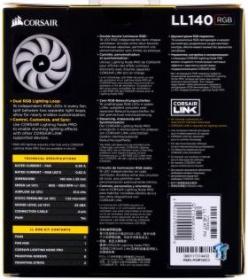 On the back of the box, we find much of the same information seen on the front, but this time we can look at a specifications chart as well. With less than one Amp, the fan and LEDs are powered for the 140mm versions, with a maximum speed of 1300 RPM. At that speed, the fans will produce 51.5CFM of airflow, and 1.52 mmH2O of pressure. The LL140 RGB fans are rated not to surpass 25 dB(A) of noise, they connect with a 4-pin lead to power the fans, and of course, they are PWM.

Inside of the box, we find the pair of 140mm fans placed into boxes which help to protect them, as well as having an enclosed area for the pair of leads that each fan needs to run correctly. Between the fans is a much thinner box, and contained inside of it are all of the parts required to get the LL140 RGB fans up and running with roughly five minutes of installation time. 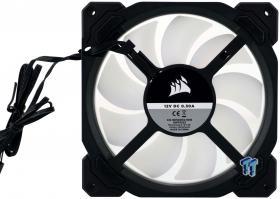 Since we already saw the front view of the fans with the black frame, white LED ring around the blades, and the opaque blades and hub, we figured we should get a look behind the scenes as well. On the sticker, we see the fan power rating of 0.30A, again, this is not considering the LEDs, and at the four corners, just like we saw on the front, there are rubber pads on the frame to eliminate vibration against the chassis or cooler.

We made mention of the fact that each fan has two leads, and here they are. At the top, we have the 4-pin PWM controllable fan power lead, which is twenty-three inches in length. The lower cable is for RGB LED control, which connects to the Corsair Lighting Node Pro module, and the length of this cable is also twenty-three inches. 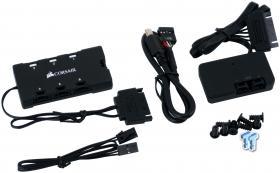 The LL140 2-Pack or the LL120 3-Pack all come with the hardware seen here, although the 3-Pack of 120mm fans comes with four more screws. On the left we see the RGB Lighting Hub, which draws power from a SATA connection, and below it is the cable to connect the Hub to the Lighting Node Pro. At the top-right is the SATA powered Lighting Node Pro. Counting all of the connections, this system can comfortably accommodate 12 fans with one Nod and two Hubs. 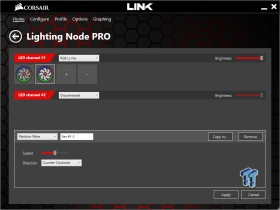 Once the fans are installed, and the software has been obtained, you are ready to customize them. To get here, on the Home page is a section for the LED channels, and a box you must click which says Configure, and then you will be delivered to this menu. Once here, assign the fans from each channel into the appropriate sections on the left, and be sure to designate which type of fans they are with the drop-down menu there. Once that is complete, you can then move to the bottom section, where you are offered Rainbow Wave, Rainbow, Color Shift, Color Pulse, Color Wave, Static, Temperature, Visor, Marquee, Blink, Sequential, Arc, Heartbeat, and Pong modes. Some of which are color selectable and others run a predefined selection of color options. 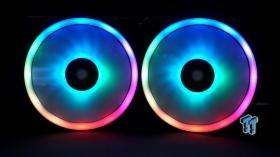 One thing is sure, in the default mode, which is the Rainbow Wave, the LL140 RGB fans spectacularly come to life. With twelve LEDs around the edge of the frame, and with four more in the fan hub, a rainbow of colors is moving counter-clockwise around these fans. Of course, there are many other options, and the level of customization offered can turn the rainbow into whatever color and pattern you see fit to use.

Right out of the gate, we do appreciate what Corsair has done, and the level of customization that the Dual Light Loop fans bring to the table. Yes, there is much to connect and wire manage, and you will need to find locations for the Lighting Node Pro and the RGB Lighting Hub, but the finished product is worth all of the hassle. Only having the air blowing oat out hand as a measure, we can say the airflow is decent, but once behind any dust filter, the feel of the airflow is reduced quite a bit; something to keep in mind. We like the rubber pads on the frame; we like the LED intensity, we love the customizations that can match your chassis to anything you want with a full RGB scale of color options. While not the best solutions as far as airflow and static pressure to use in a chassis, there are only a couple close in comparison, while many other fans will not come close to what is offered here.

The LINK software is where all of the magic happens with the LL140 RGB Fans 2-Pack. While you do have to be careful when it comes to the initial setup, as there is a warning to select the proper device, as selecting the wrong product could cause damage. Once past the fact that we feel Corsair should make this impossible somehow, we were impressed with all of the modes, color ranges, and the simplicity in how it all works. One thing we did not care for though, is that even though all fans are on a single channel, many of the modes have to be set to each fan on the channel, and then all saved at once so that the patterns look good and the color shift all happen in tandem. It would be so much easier if all fans on the channel had a box to check so all fans could be set when one of them is programmed.

With all of the good and some of the not so good out on the table, there is still one thing to consider. The cost. As it stands, the LL140 RGB 2-Pack will set you back $99.99, and each additional fan you buy will cost another $39.99. The LL120 RGB 3-Pack is priced at $119.99, but each extra fan is $34.99. At first glance, the cost seems expensive, but the reality is that is isn't all that bad. Standard RGB fans will cost from $15 to $50 alone, and in this kit, we also get the controller, the hub, and all of the connections needed to make it all work. While we do feel most of the money is wrapped up in the lighting, as it is the best feature of the Dual Light Loop fans, we do not feel that Corsair is asking an exorbitant amount. To us, Corsair has raised the RGB LED fan illumination game; we just wish the fans had a bit more grunt to them.

The Bottom Line: Corsair's LL140 RGB fans are amazing to see in action, and will deliver customization to the nth degree to suit anyone's needs! However, the kits are costly, and we do wish there was more airflow to go with all the sexiness.