While it's hard not to be slightly disappointed by the absence of any real technical innovations, there's no denying that Alta HR is an excellent, entry-level tracker with a range of excellent and motivating features.

While Fitbit continues to develop its long-term goal of taking of overtaking Apple with its first true smart watch, it's been left to this year's Charge 2 and Alta HR models to keep the company's product line ticking over. Despite undoubtable improvements in its latest offerings models, it's hard to not come to the conclusion that they're content to merely tinker at the edges. That said, the Alta HR does come packing one very crucial addition to its hardware which will please many and serves as its raison d'être. 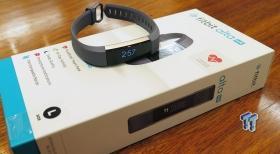 Replacing Fitbit's Charge model, it was the complete hardware redesign which helped to set last year's Alta apart, possessing a clean design unashamedly aimed at a more fashion-conscious demographic, with an attractive price point to boot. Sure, it didn't have the company's unique PurePulse heart rate sensor found on higher-end models, but sometimes you've just got to make those compromises in the name of style, right? Well, not this year. As you may have guessed from the 'HR' moniker, Fitbit has managed to squeeze a fully featured heart rate sensor into the underside of the band, without altering the design chic. It's a small technological leap for sure, but one cannot underestimate how much this improves the whole package. But let's step back and take a look at it as a whole. 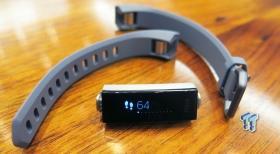 With Alta HR's emphasis on clean lines, there are no physical buttons included on the band itself, so it's left to the large OLED display that's perfectly nestled in the band's frame to act as the main input device. It's not touch sensitive though, requiring the user to tap the band to cycle through the menu items -sometimes multiple times just to wake it from its slumber. The narrow size means it sits a little higher on the wrist than other wearables on the market, but never feels obtrusively so. Despite the inclusion of a heart rate sensor, there doesn't appear to have been an impact battery life, which continues to last around five full days.

Thanks to some clever programming the lack of any buttons doesn't just go unnoticed, their absence is actually rather liberating, with the software generally able to automatically differentiate and track a range of pre-defined workouts such as running, cycling and general gym workouts. Rather than limit its use, Alta HR's automatic nature makes it even more appealing to its target demographic, only requiring users to strap it on and it does the rest without drawing attention to itself. Of course, Fitbit's core functionality such as step tracking, connected device alerts and reminders to move are all accounted for, and the heart rate sensor helps deliver significantly more accurate calorie burning data. 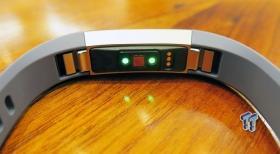 Those who like to bling out their trackers with something a little less subtle than the stock bands are in luck, as once again the tracker panel is removable and interchangeable with a variety of alternate armbands (all available separately). This year, the rather flimsy notched style of wristband found on last year's model has been upgraded to a more standard watch-style clasp found on most of the company's other products. While it's probably a slight step back in cosmetics, it makes for a far sturdier fit. As with all devices designed to be worn all day, there's the potential for skin irritations and rashes for some, but proper maintenance and care as dictated by the instructions shouldn't be an issue for most. Naturally, those with pre-existing skin allergies, especially to plastic should be especially vigilant.

Far from the less refined experience from a few years back, Fitbit's faultless and entirely user-friendly app makes for a uniformly excellent experience across a range of devices. For everyday information, the mobile app does a great job of displaying the most pressing vital stats, as well as control over settings, while the web app gives access to a slightly broader suite of statistics and interactive graphs to illustrate your health progression. 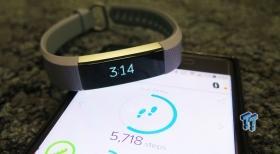 Alta HR also benefits from a range of enhanced software based features, including sleep tracking and sleep stages which gauge the quality of slumber, as well as new features such as the Adventure Races feature which allows users to virtually race your Fitbit contacts through famous destinations such as the New York City Marathon. It might seem a little 'cute,' but it's just another way that Alta HR helps to engage users and make physical activity a bit less of a chore.

While it enters an increasingly crowded marketplace without any major innovations to call its own, Alta HR does add the very welcome addition of a heart rate sensor to what was already easy to use, feature packed and fashion-conscious tracker. While gym junkies and runners will understandably continue to preference higher-end models such as Charge 2 or Blaze, Alta HR is a fantastic choice for those who've never owned a fitness tracker, or who are looking to upgrade from older, more basic models.

The Bottom Line: While it's hard not to be slightly disappointed by the absence of any real technical innovations, there's no denying that Alta HR is an excellent, entry-level tracker with a range of excellent and motivating features.