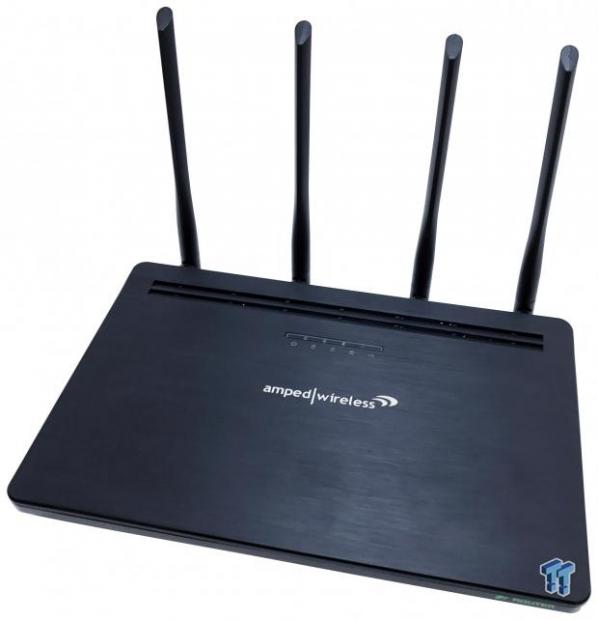 Not long ago, we had the chance to look at the Amped Wireless entry into the Wi-Fi System or Mesh market with Ally Plus. It seems they had no intentions of stopping there as they are pushing on refreshing their lineup top to bottom. The Athena R2 begins this journey as the top-tier solution.

The Athena R2 appears to be a complete redesign with the enclosure going more towards the low-profile design of the Artemis. It doesn't stop there either as Amped has swapped out much of the internal hardware as well. The original Athena came along during the initial wave of Qualcomm AC2600 solutions; it sported a 1.4GHz quad-core processor and 512MB of DDR3. This new solution has taken a different route going with a quad-core 1.3GHz processor and 256MB of DDR3 memory. 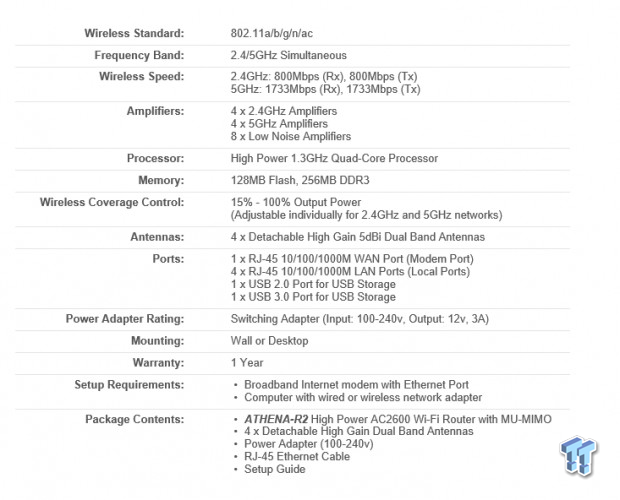 Moving on, this solution houses four detachable antennas and wired connectivity consisting of one Gigabit WAN port and four Gigabit LAN ports. There are two storage ports available on this unit - one being USB 2.0 and the other USB 3.0.

The MSRP of the Amped Wireless Athena R2 comes in at $199.99 with a one-year warranty. 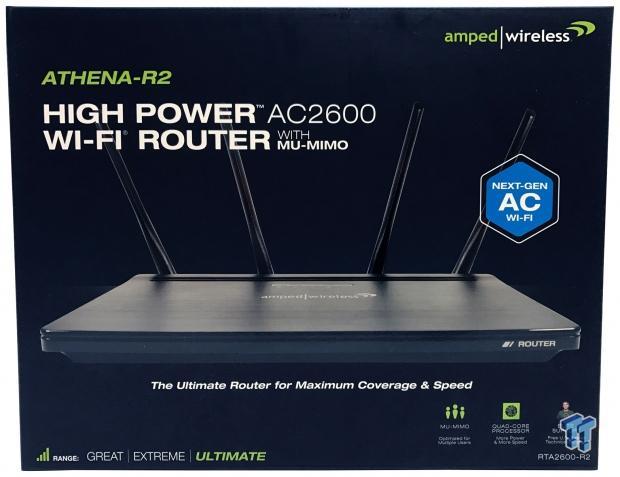 Packaging is dark for the Athena R2, although it does follow Amped Wireless color scheme. The front houses an image of the router with marketing taking over the bottom of the box. 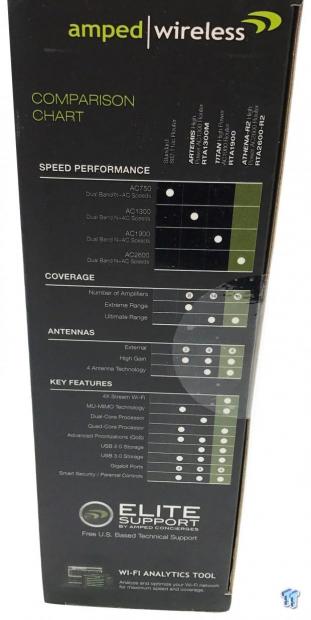 The spine houses a router comparison with the Athena R2, Titan, and Artemis. 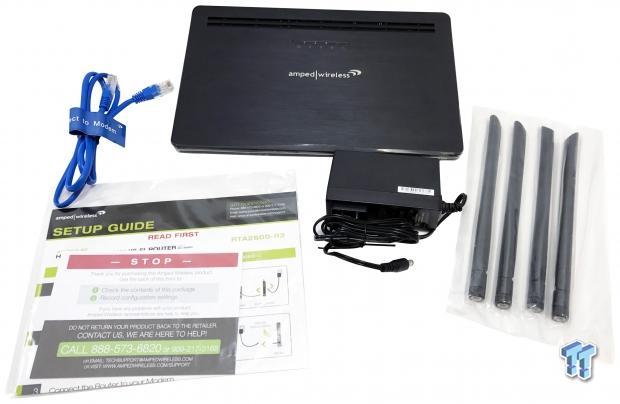 The scope of delivery include the detachable antennas, Ethernet cable, and power adapter. There is also reading materials for setting up the router. 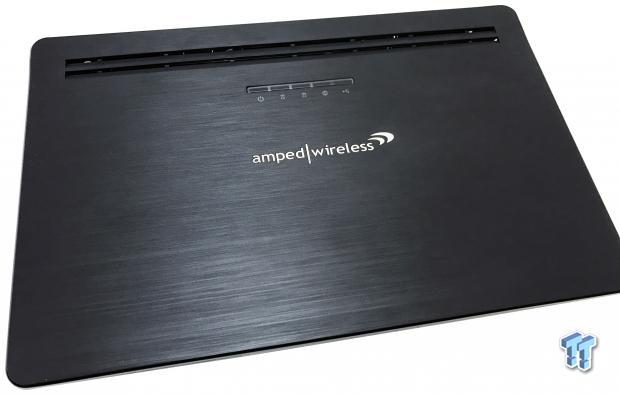 Looking at the router, we have a brushed aluminum look with several LEDs and chromed logo in the center.

Along the right side, you will find the USB 3.0 port.

Moving to the back, we find all four SMA connections for the antennas. Adding to this, we have the USB 1.0 port in white, four Gigabit Ethernet and a single WAN next to the LED switch, WPS and reset buttons. 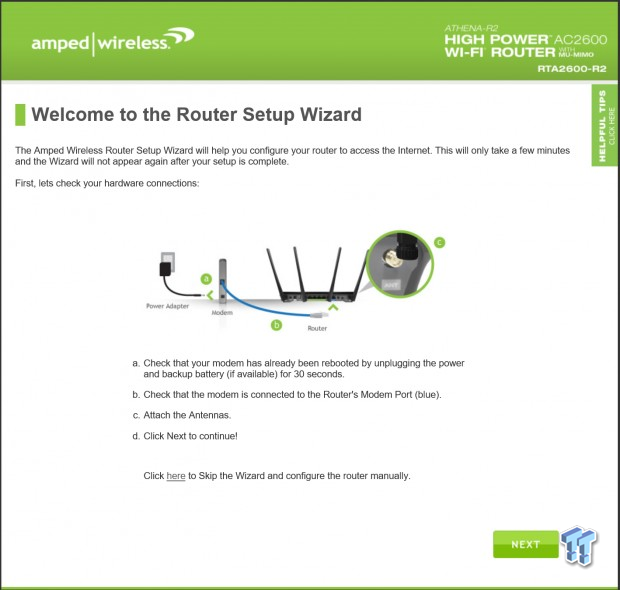 Setup is straight forward with this solution, but you do get a quick wizard upon connecting everything. 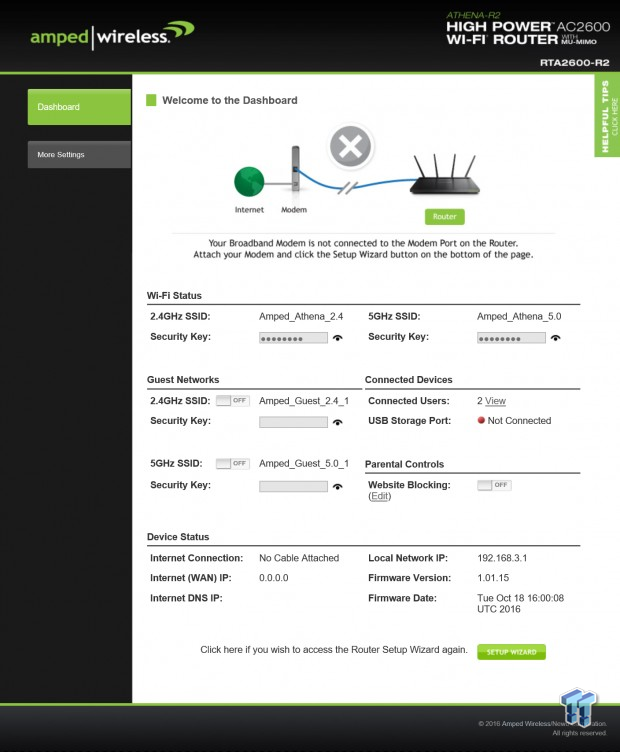 Once in the Web GUI, we have the dashboards showing us an overview of the system. 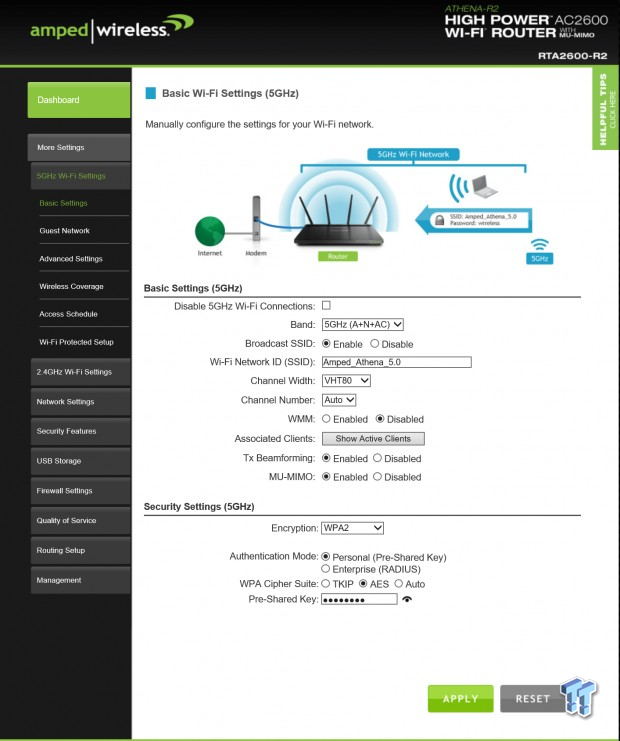 The Wireless menu is the same for both 2.4Ghz and 5GHz with the SSID, password, and bands all configurable from this menu. 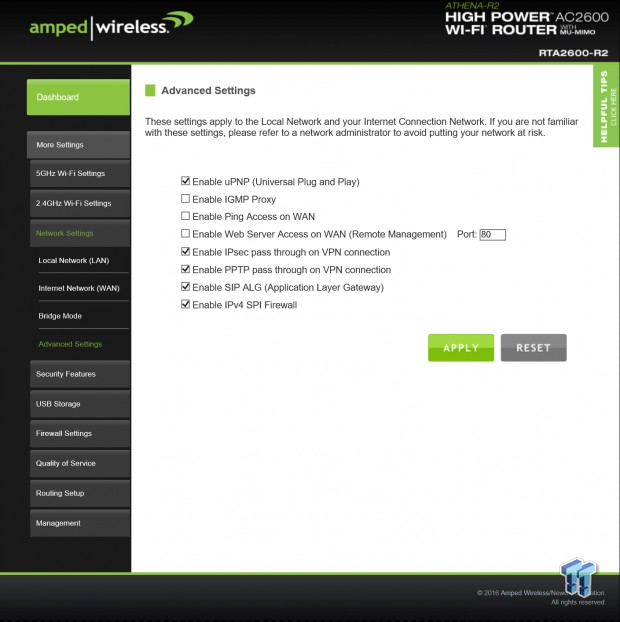 In the network settings menu, you have access to LAN and WAN settings along with the ability to swap this solution to bridge mode if needed. In the advanced menu, you can control the firewall and VPN settings. 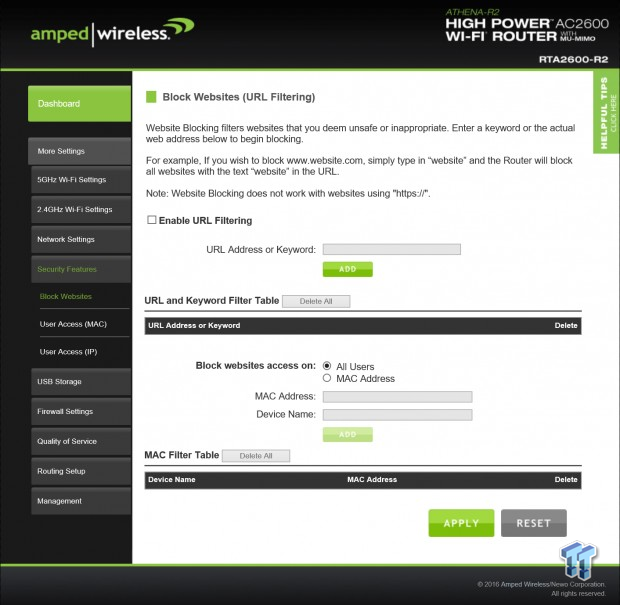 For parental controls, you do have the ability to block websites. You can also setup User access by MAC or IP. 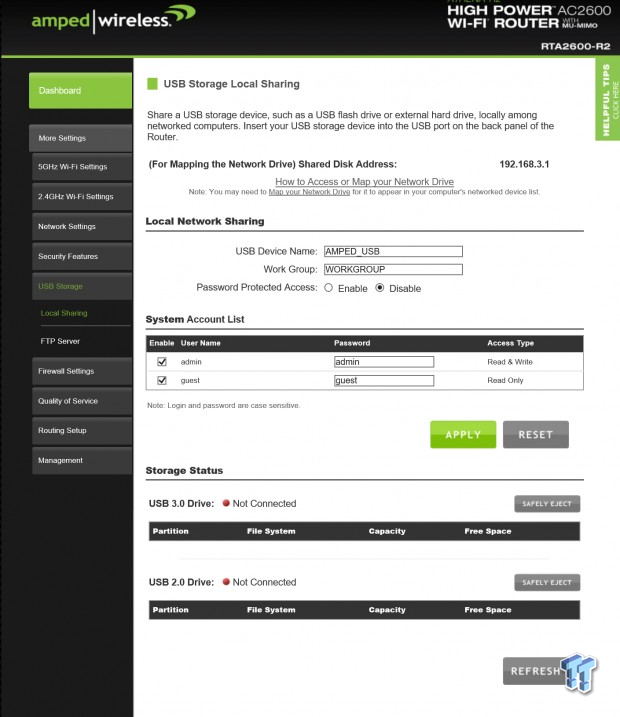 The storage menu gives you access to both USB ports allowing them to show up on the network as storage devices. 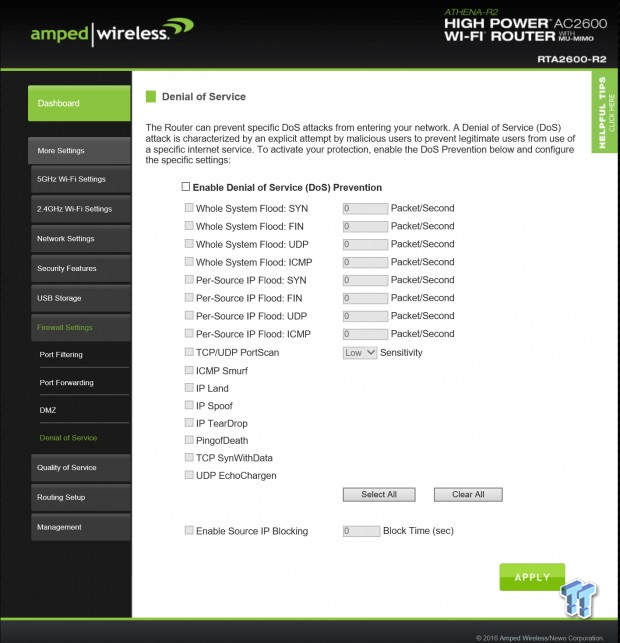 In the firewall settings, you will find your port forwarding and filtering options. 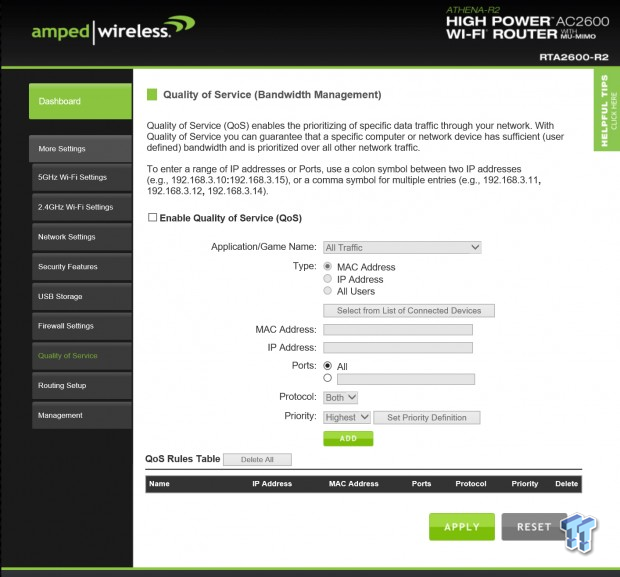 Last, we have QoS for high traffic homes that consume a lot of throughput. This option will take your available bandwidth from your ISP and manage it prioritizing devices over others. 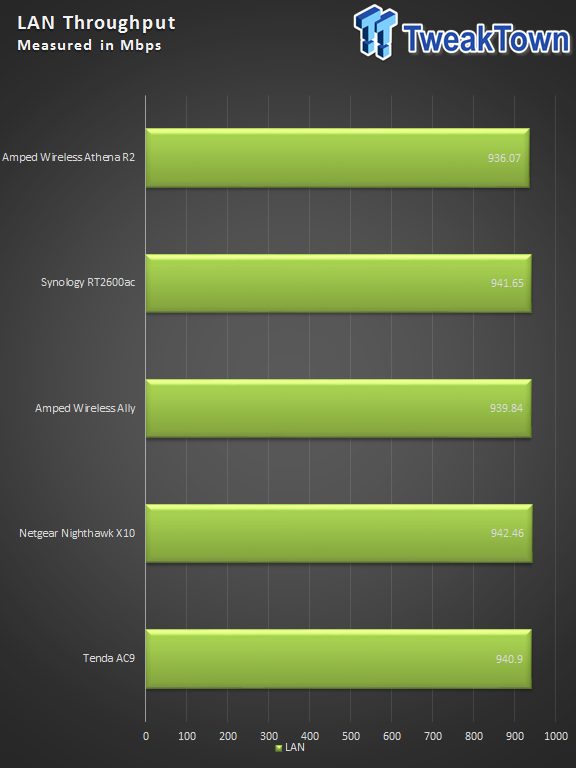 The Athena R2 did quite well in LAN throughput bringing in 936 Mbps. 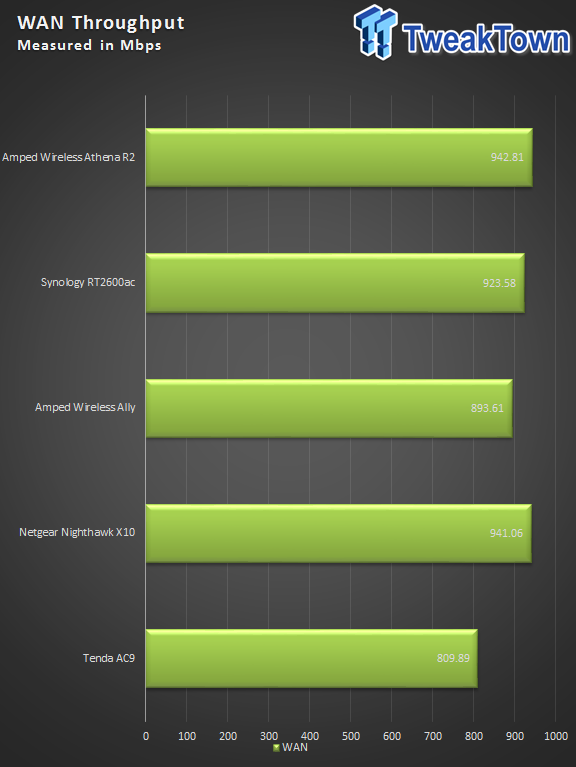 WAN throughput came in at 942 Mbps. 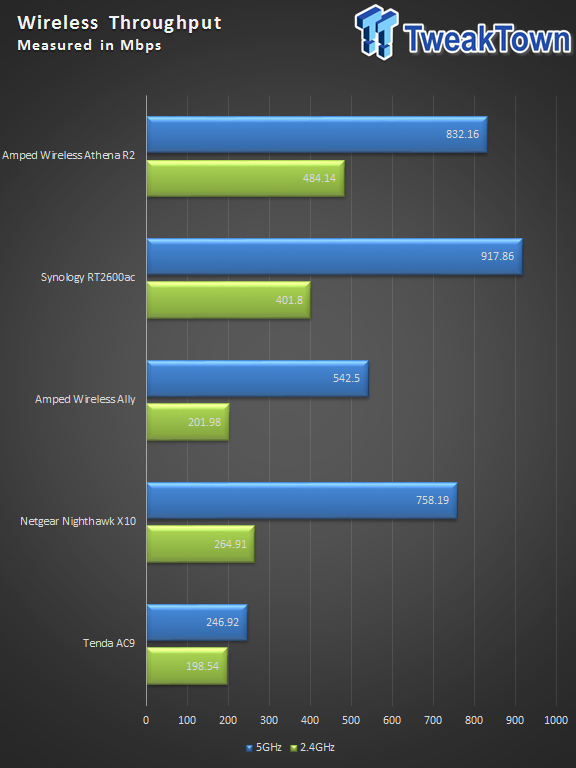 2.4GHz performance topped 484 Mbps, making it the quickest solution so far. 5GHz performance was admirable at 832 Mbps, second to the Synology device. 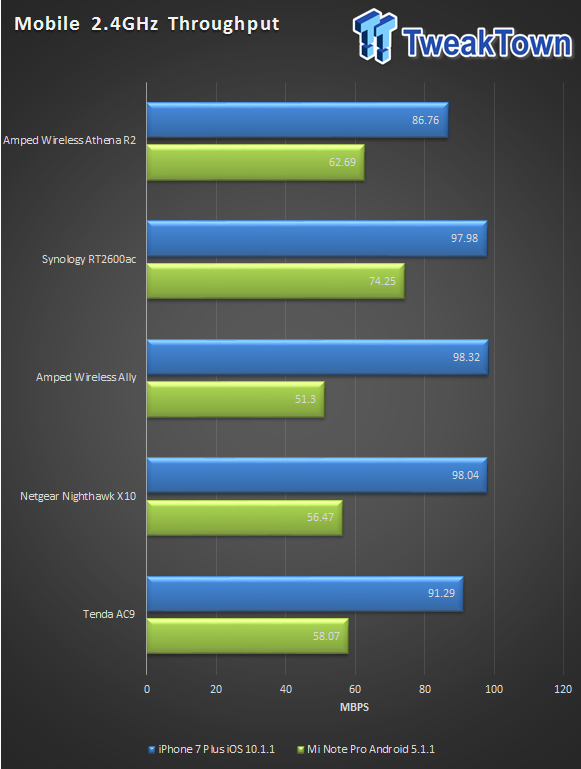 Mobile throughput proved decent for the Athena R2. I could bring in 86.7 Mbps with my iPhone and 62 Mbps with my Android solution. 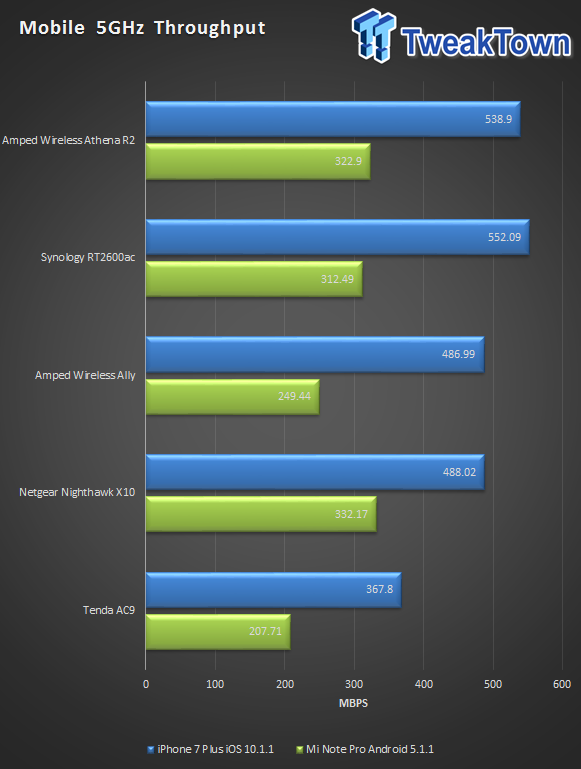 5GHz mobile throughput showed 538 Mbps for the Athena R2 on my iPhone and 322 Mbps for Android.

Our next test for this new setup sees how range affects performance. For this we start at 10ft, within line of sight from the router, we move out to a max distance of 40ft with each 10Ft adding in a wall. The Client device is an iPhone 7 Plus. 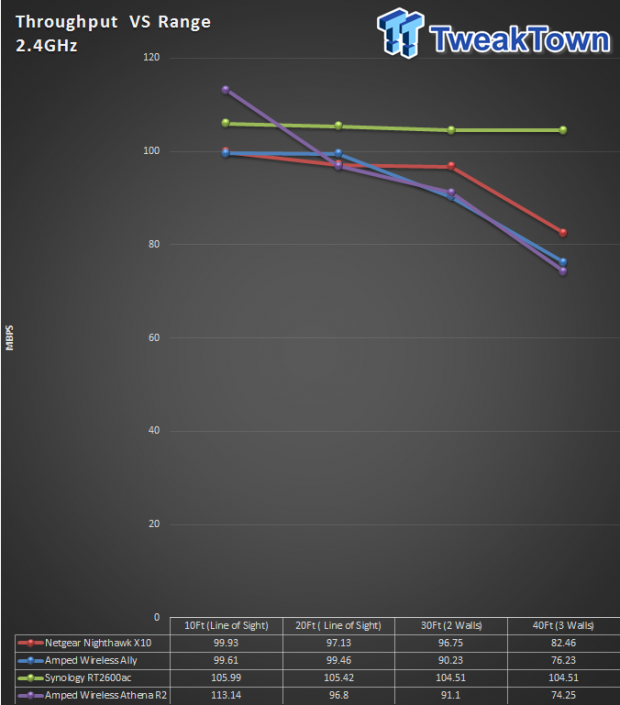 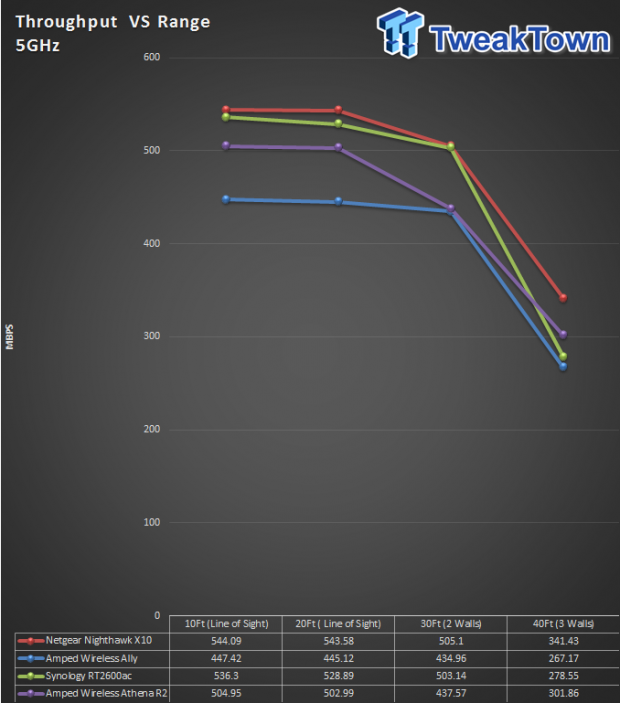 Storage testing for the Athena R2 was done with the USB 3.0 port and a 128GB SanDisk Extreme Pro flash drive. 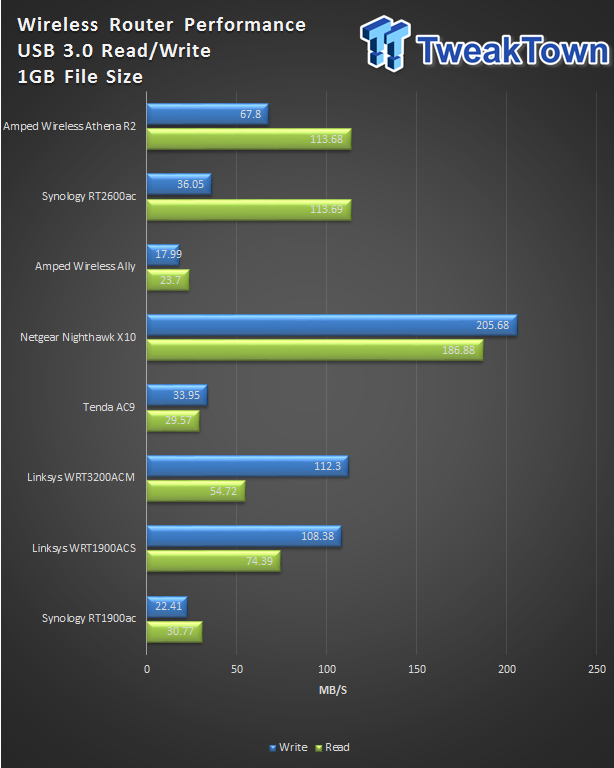 Diving into the results, I was very surprised to see the Athena R2 bring in 113 MB/s read in our testing. Write performance wasn't too bad either at 63 MB/s. 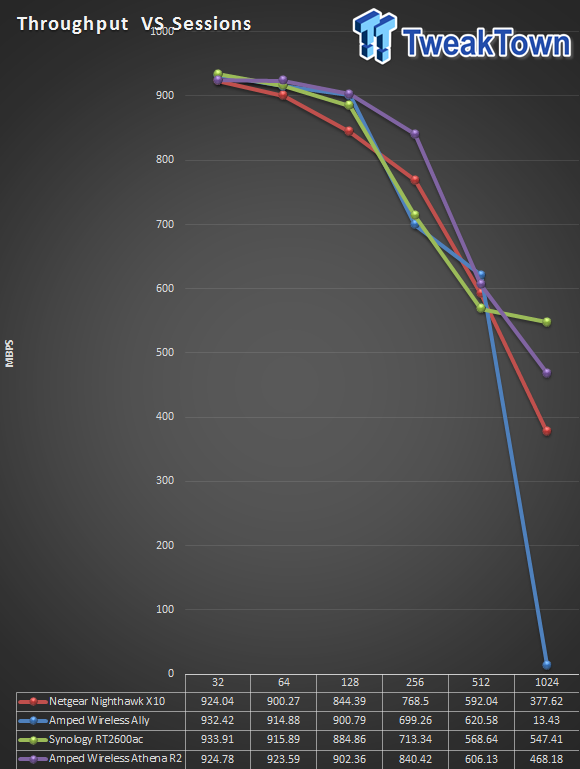 Basically, with this test, I'm looking to see if the router will lock up if enough sessions are pushed through the hardware.

I'm quite surprised by the Athena R2 as I wasn't expecting it to be such a strong solution, especially with the change of hardware from the original solution. With that said the design is following that slim profile I first saw with the Athena EX range extender, hell they could be using the same enclosure for both to save on injection molding costs.

As far as features are concerned, the Athena R2 stays true as an AC2600 class solution. We grabbed a good bit of performance through its wired Ethernet ports including 936 Mbps on LAN and 942 Mbps on WAN. Wireless performance was top notch for 2.4GHz making it the quickest solution in our new charts. 5GHz was right behind the new Synology solution at 832Mbps.

Going through our mobile results, the Android device will most likely be dropped soon in our charts because it just doesn't perform as well as the iPhone. I'll likely be on the lookout for something more modern for the Android side of testing, maybe a Pixel or whatever Samsung comes up with. In these test, we grabbed solid performance from the Athena R2 with 5GHz at 538 Mbps.

The range was standard for the 2.4GHz band although this solution didn't fare too well starting out as the quickest solution but ending as the slowest. On the 5GHz band, it did much better starting as the third quickest but ending in second. File performance was surprising for the Athena R2; Amped solutions aren't on the top of my list as "NAS replacement" solutions but the Athena pulled in 113 MB/s read and 67 MB/s write, perhaps I'm wrong about them.

Overall, the Amped Wireless Athena R2 is a solid AC2600 class solution. It carries great performance through wired and wireless connections and proves it can surprise in the storage department.

The Bottom Line: The Amped Wireless Athena R2 proves itself as a high performance solution capable of delivering on wired and wireless connections, as well as USB.