The Amped Wireless Ally Plus is one of the best performing "Whole Home" solutions on the market. Pairing it with a rather solid app for iOS and Android along with security from AVG enhances the user experience with on-the-fly parental controls.

Back in August of 2016, Amped Wireless announced their entry into the Wi-Fi System market with the Ally and Ally Plus. I have been in talks with them since to have a sample unit sent over for testing, and today we have that opportunity. It won't be long before every vendor has their own "Mesh" or Whole Home System on the market. In fact, the only big vendors missing from this space right now are D-Link, TP-Link, TRENDnet and ASUS.

The Ally comes in two SKUs with and without the extender, the Plus having the extender included. The design of these units goes away from the traditional look and feel we normally get from Amped Wireless. With this particular setup, we have two devices router and extender, sharing the same design both gloss white in appearance. 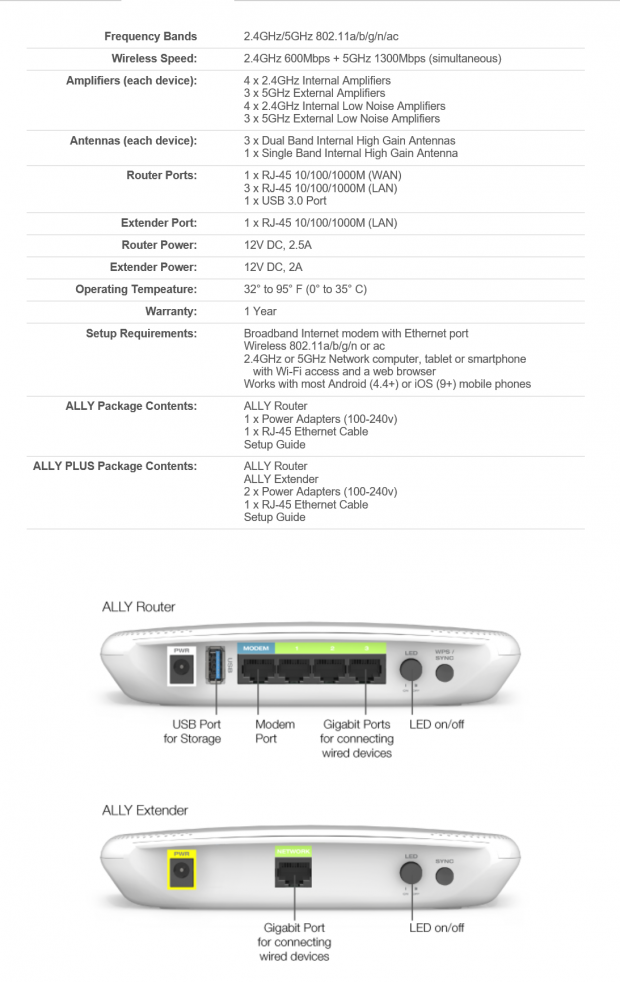 The Amped Wireless Ally and Ally Plus features 600 Mbps capability on the 2.4GHz band and 1300 Mbps on the 5GHz, making the router and extender both AC1900 class devices. Each device houses four 2.4GHz and three 5GHz amplifiers together with three dual band antennas producing up to 15,000 Sq. Ft of range. Wired connectivity is supported by three Gigabit Ethernet ports on the router and one on the extender.

The MSRP of the Amped Wireless Ally Plus comes in at $379.99 with a one-year warranty. 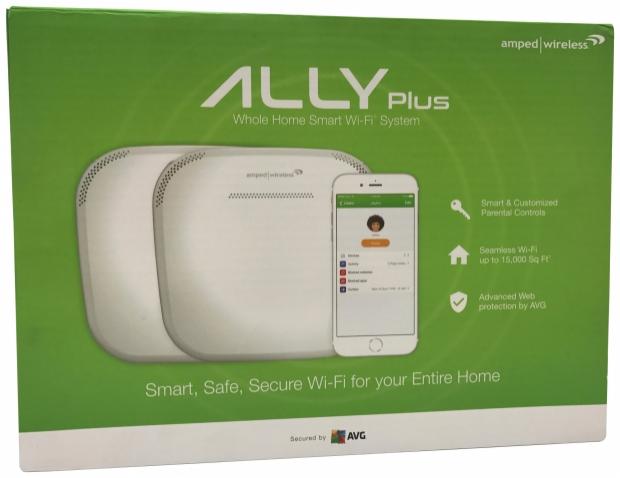 Packaging is quite nice for the Ally Plus; we have an image of the devices on the front next to a slight bit of marketing to the right. 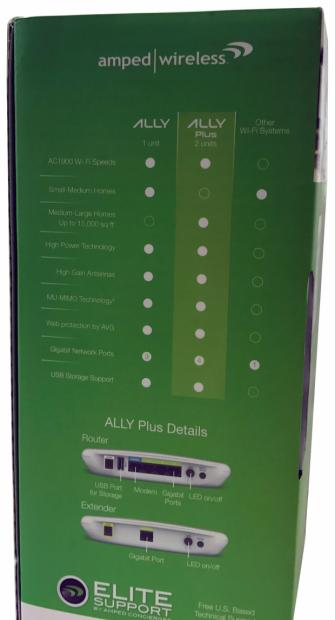 The side of the box houses a comparison between Ally devices.

The scope of delivery includes the router, extender, and power adapters.

A closer look shows a LED at the front that goes from red or amber to green once setup.

The back of the router carries a large portion of the gigabit ports along with the USB 3.0 to the left. 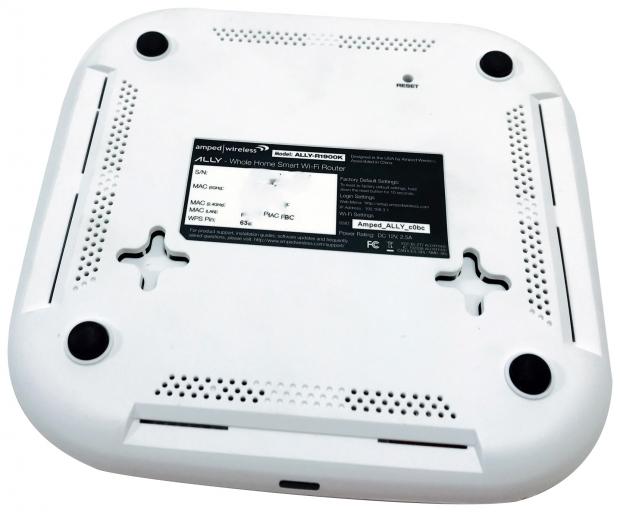 Underneath, these solutions have wall mounting points. 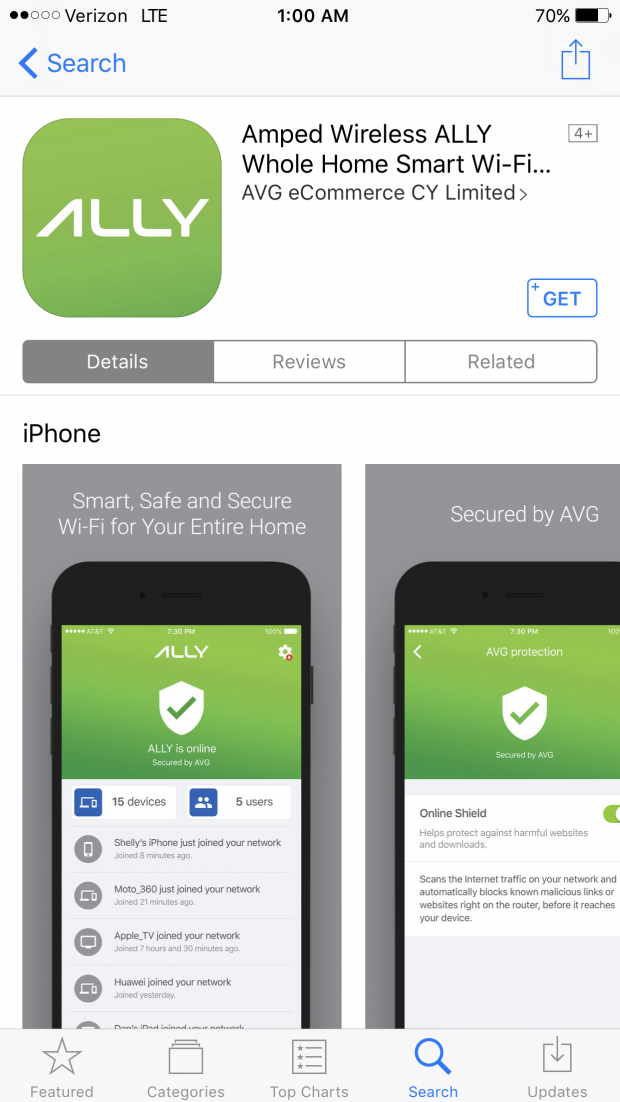 The Ally Plus uses an app to configure a large majority of settings. It does have a traditional Web GUI as well, but you will only need that for configuring high-level settings. 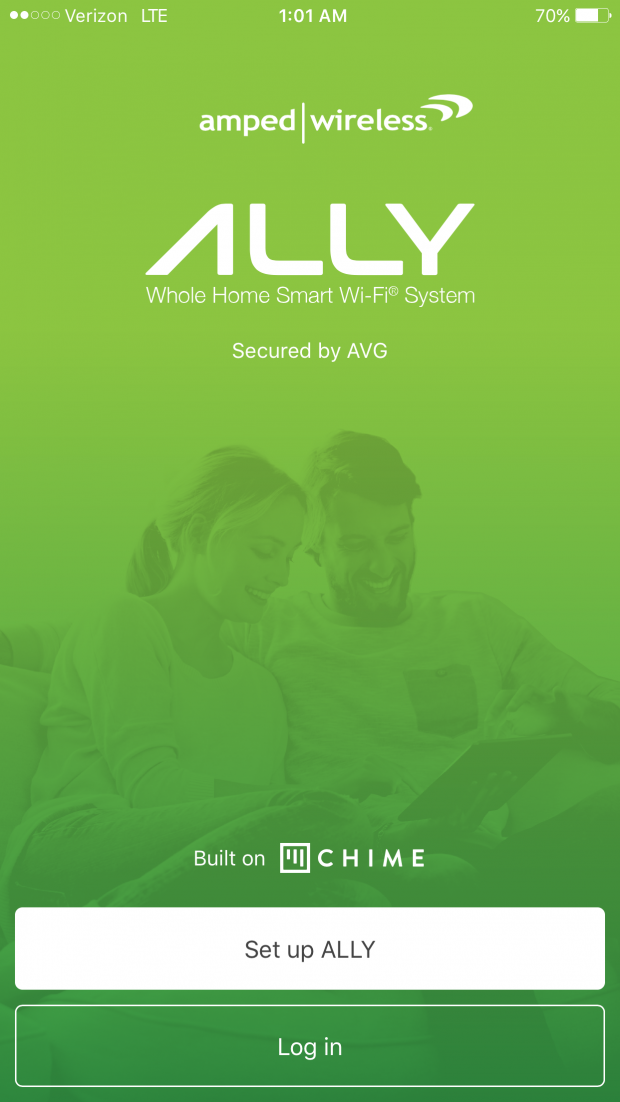 The splash screen above is for logging in if you already have an account setup or the setup wizard if you don't. 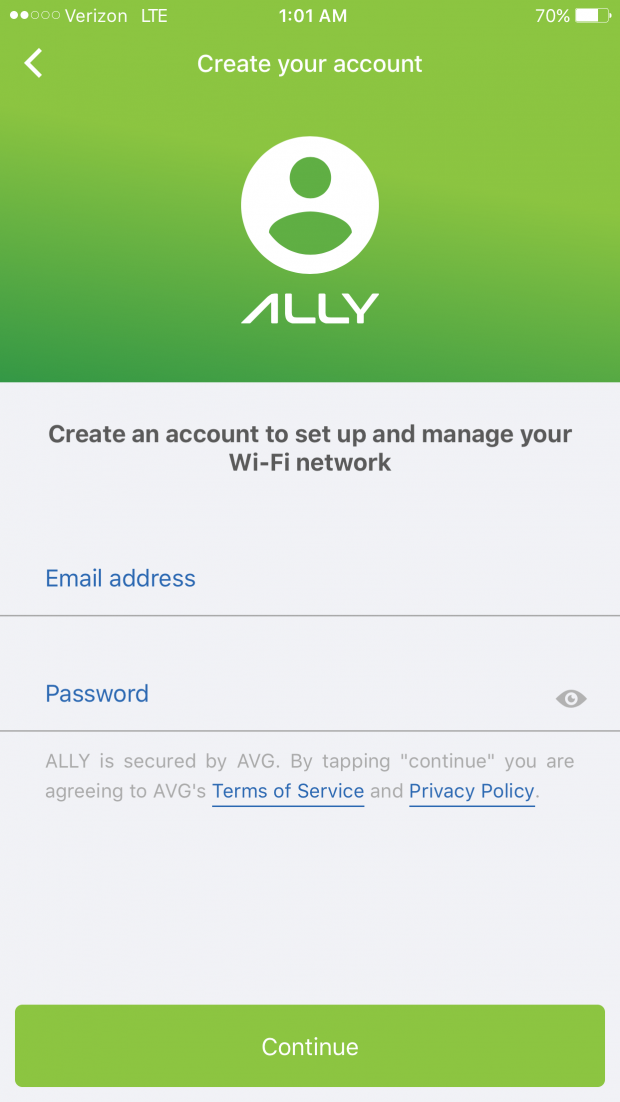 Ally Plus requires an online account to set it up; we start that process above. 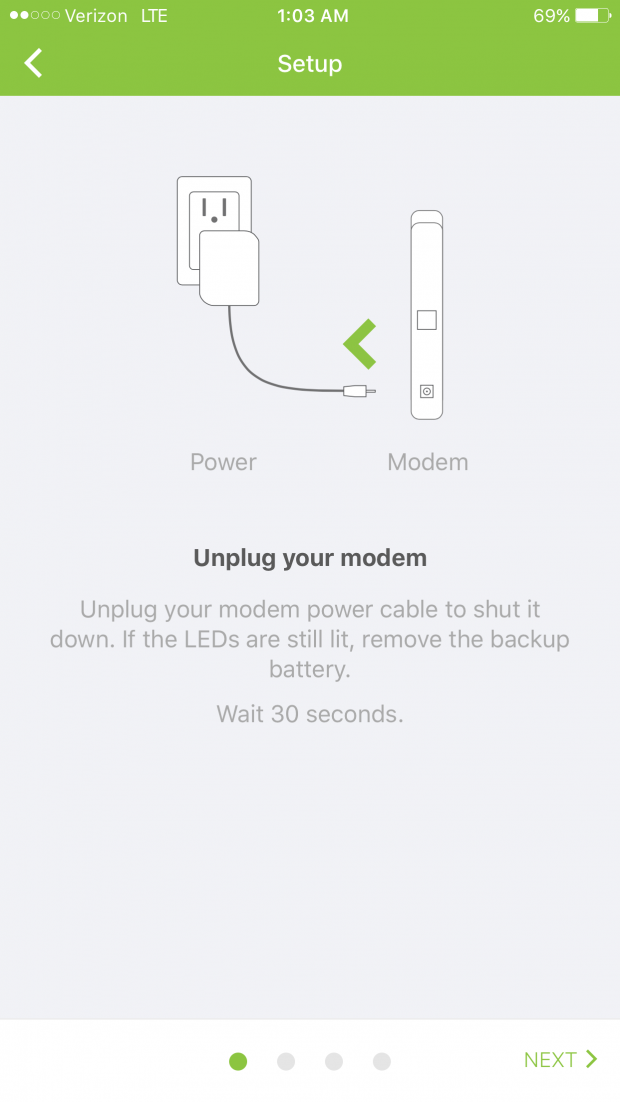 The wizard guides you through the setup of Ally, seen above. 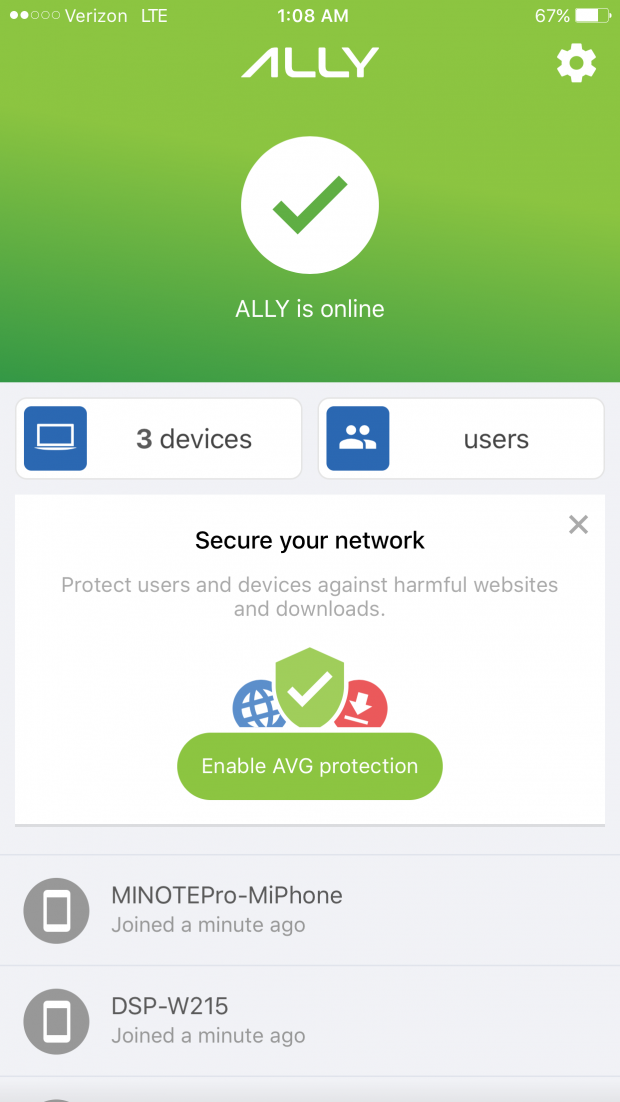 Once everything is setup, we have this dashboard menu seen above. Amped has partnered with AVG for security on this platform, but you do have the option to disable it if not wanted. Seen above, you get a quick look at devices connected to your network along with the option of creating users. 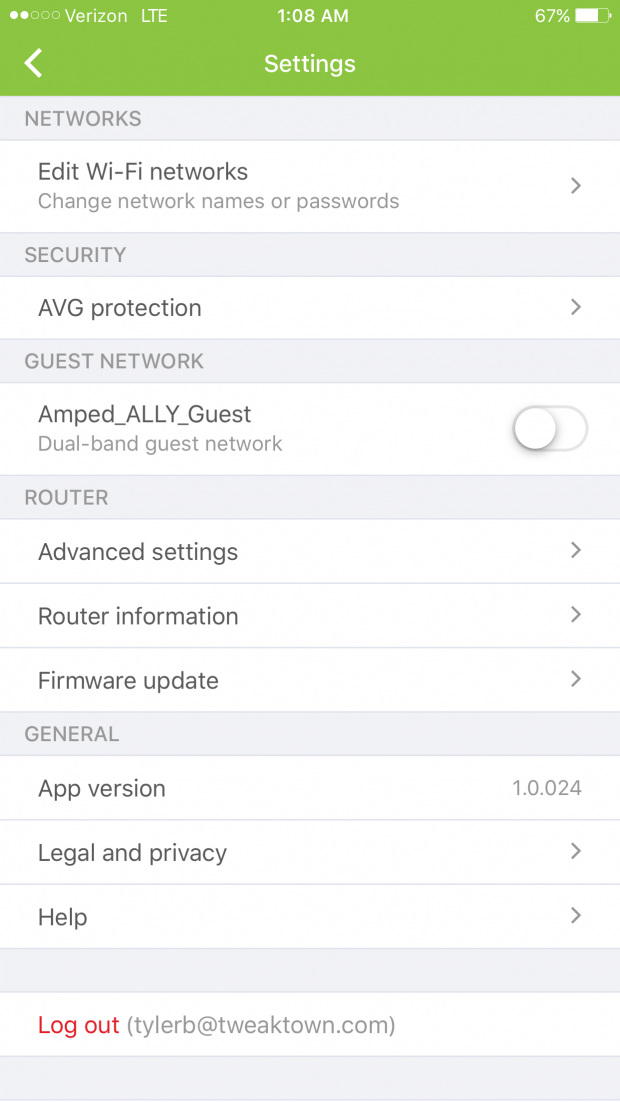 In the settings menu, you have access to Wi-Fi settings, AVG protection along with guest network settings. For higher level control, you will need to go to the advanced settings menu and get the password for the Web GUI. 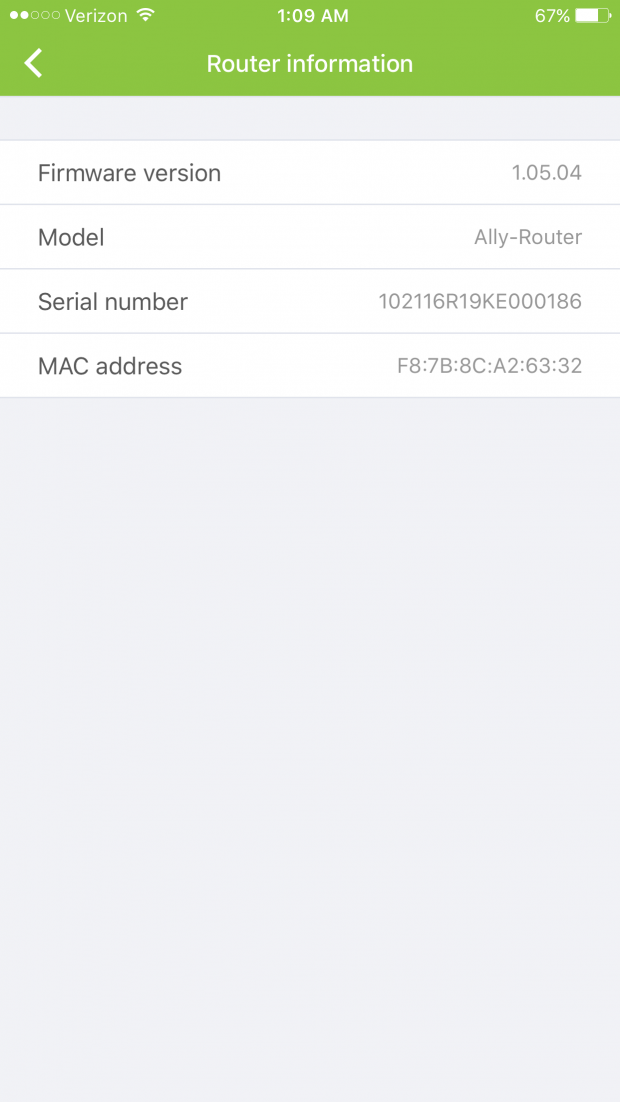 I tested the Amped Wireless Ally Plus on the 1.05.04 firmware. 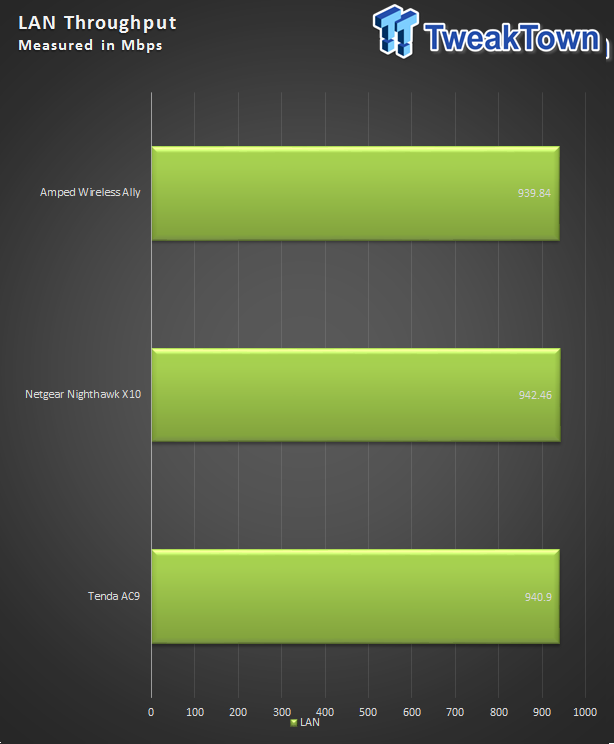 With just three devices having been tested with our new platform, the Amped Wireless Ally Plus starts off pretty good at 939 Mbps on Wired LAN throughput. 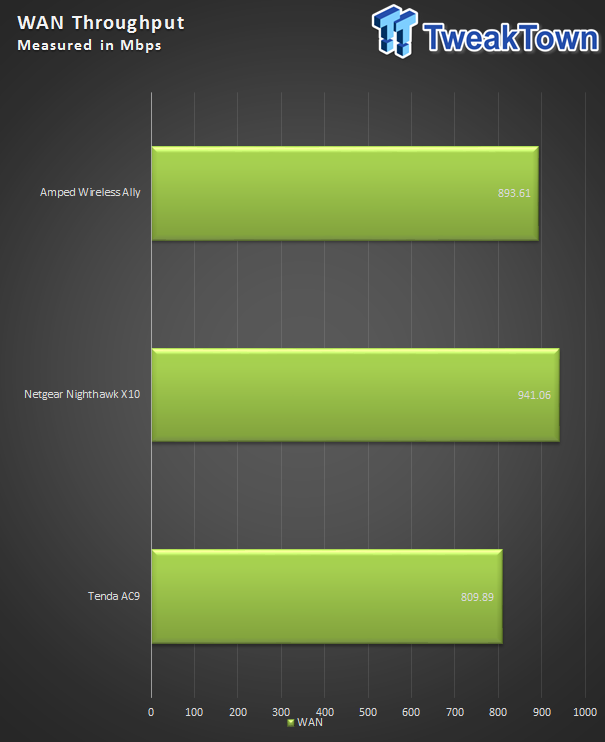 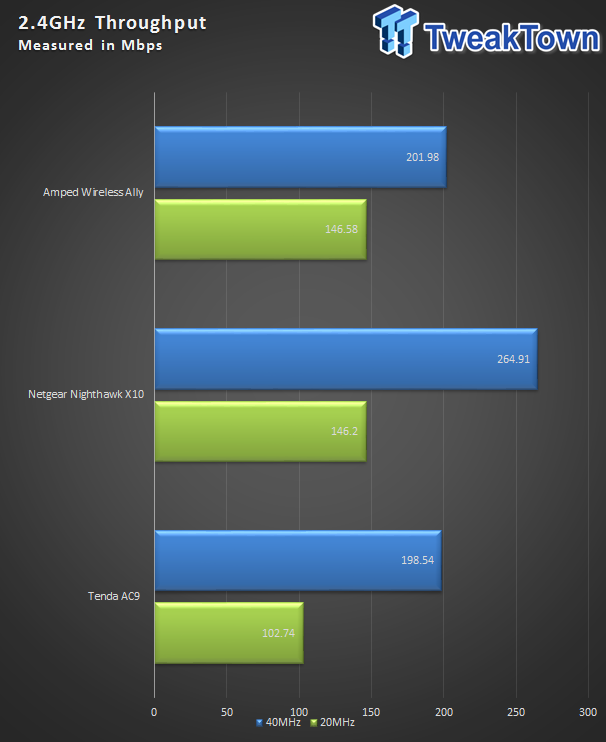 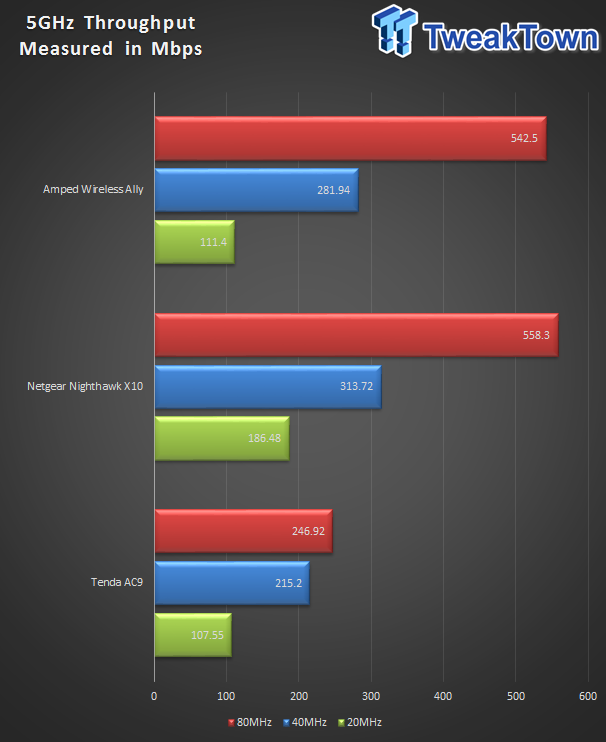 5GHz throughput for the Ally was on par with the X10 reaching 542 Mbps on the 80MHz band followed by 281 Mbps and 111 Mbps, respectively.

With mobile throughput, I run testing through an iPhone 7 Plus and Mi Note Pro to see the performance with mobile devices. Throughput is tested with the router in is default state from the factory. 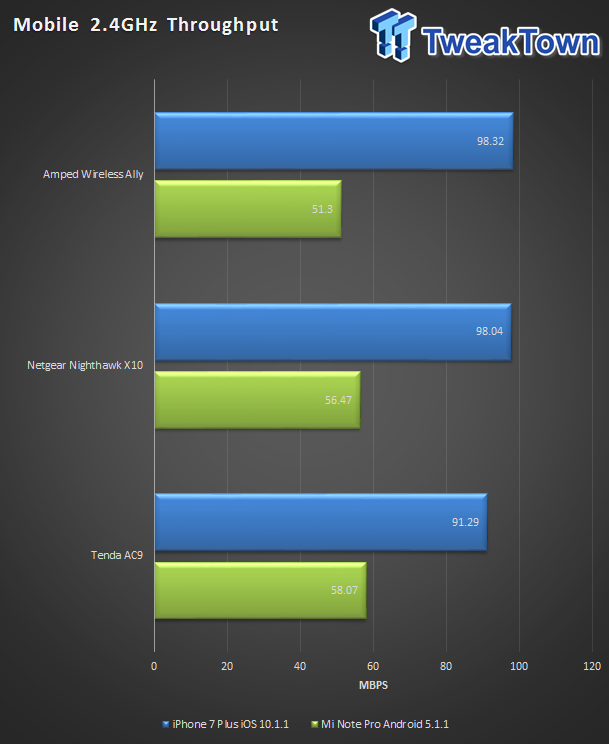 The Ally showed greater throughput with the iPhone 7 Plus reaching 98 Mbps. 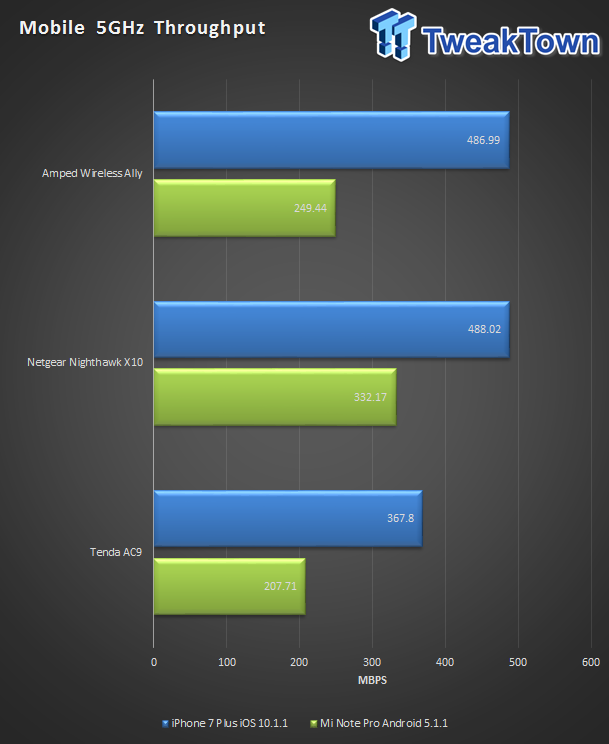 5GHz mobile throughput reached 486 Mbps with the iPhone 7 Plus while the Note Pro touched 249 Mbps.

Our next test for this new setup sees how range affects performance. With this, we start at 10Ft and move out to 30Ft, after we reach the end we move to a location again at 30Ft but with two walls between us and the router. Routers are tested in their default configuration for this part; the client device is the iPhone 7 Plus. 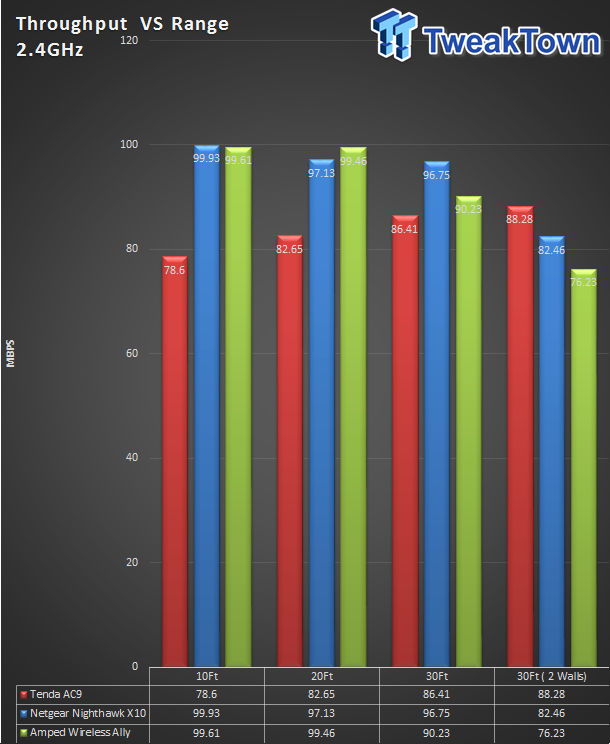 Starting off this test, the Ally Plus gives us 99 Mbps on the 2.4GHz band. As we move away performance drops only slightly to 90 Mbps at 30ft, two walls net us 76 Mbps. 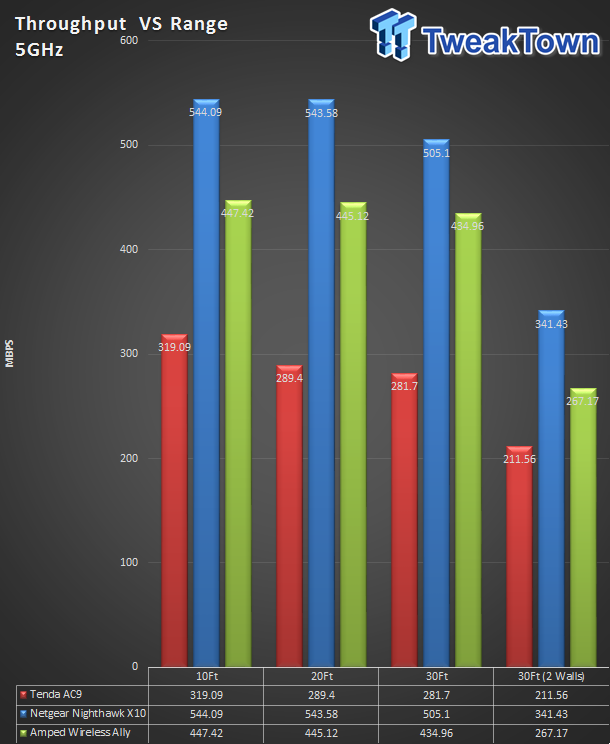 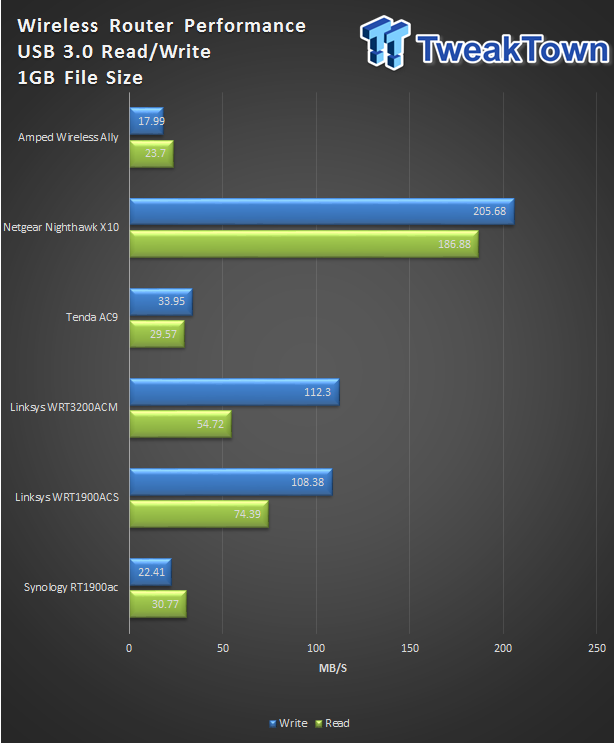 The Ally Plus certainly isn't a storage-centric solution. With our SanDisk Extreme Pro, we were only able to get 23 MB/s read and 17 MB/s write out of the device. 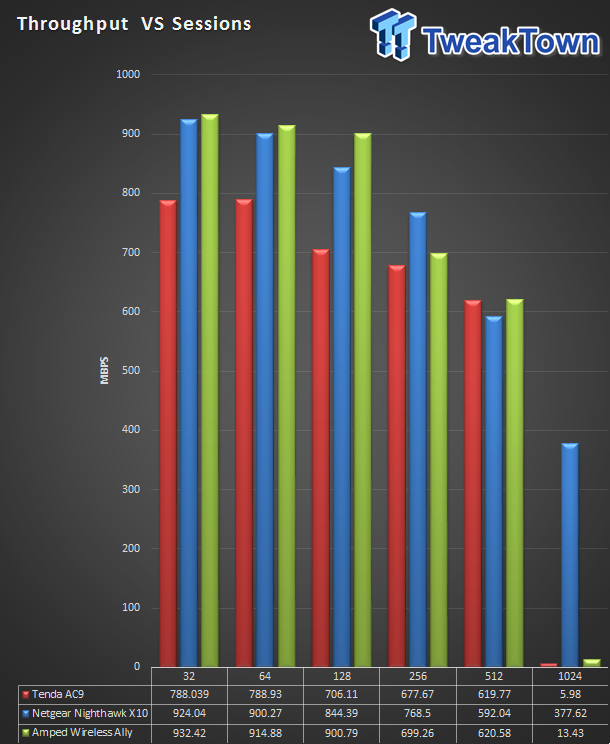 Basically, with this test, I'm looking to see if the router will lock up if enough sessions are pushed through the hardware. We start at 32 sessions with the Ally Plus at 932 Mbps, moving through 128 sessions the router holds strong with the first performance decrease coming at 256 connections down to 699 Mbps. Moving on to 1024 connections we see the router drop further to 620 Mbps and finishing at 13 Mbps.

At this point, I have used three Whole Home or Mesh Wi-Fi setups in my own network. The Ally Plus is right up there regarding functionality with the Ubiquiti Amplifi HD; I'd say the build quality is certainly ample for what it is and the white aesthetic is much more pleasing than the black we get with standard solutions.

Performance is pretty solid; the router carries similar performance to other off the shelf AC1900 class solutions. LAN reached 939 Mbps and WAN 893 Mbps, both respectable numbers. Wireless throughput reached 201 Mbps on 2.4GHz and 542 Mbps over the 5GHz band. Wireless range was respectable for Ally as well especially the 5GHz band reaching to 30ft with very little performance loss.

The app is very well made, easy to navigate and change settings. I do like that with AVG you can change parental controls on-the-fly. Overall, I had little issue in setting up the Ally Plus or using it. The only downfall I could find with the Ally was the app not letting you control any settings if you lose your internet connection.

The Bottom Line: The Amped Wireless Ally Plus is one of the best performing "Whole Home" solutions on the market. Pairing it with a rather solid app for iOS and Android along with security from AVG enhances the user experience with on-the-fly parental controls.