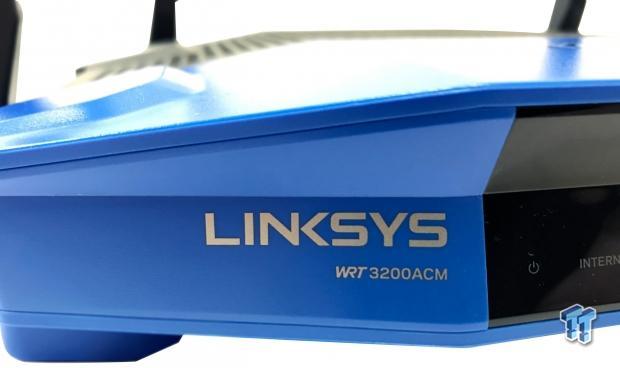 WRT routers always get me excited if not for anything else, the nostalgia. However, this latest solution to carry on the tradition does have a few tricks up its sleeve. Branded the WRT3200ACM, one would be safe to think this solution is a tri-band router, like the X6 from Netgear, but in fact, you would be wrong. What we have here is just a bit of clever marketing and a router that is a dual-band AC1900 solution with a somewhat juiced up but we can't use it yet 5GHz 160MHz capable band.

Maxed out link rates work out as 2600 Mbps on the 5GHz @ 160MHz and 600 Mbps for the 2.4GHz which is where Linksys is getting the AC3200. With that said, the only way to test the full capabilities of this 5GHz 160MHz band would be to use a second WRT3200ACM, which we don't have and thus we will be testing with our standard equipment. 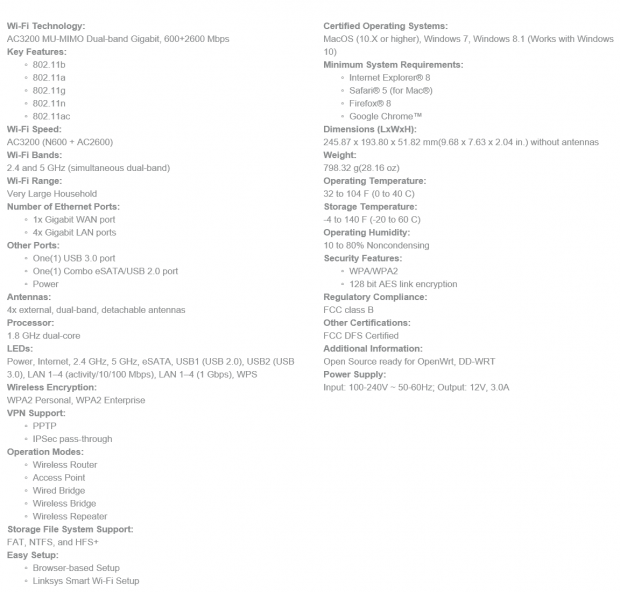 Diving into the specifications, we have a dual-band platform aimed at very large households. You will find four gigabit Ethernet ports on the rear of the unit next to a single gigabit WAN port. Additional connectivity can be made through the USB 3.0 and somewhat out of place eSATAp USB 2.0 combo port.

At the heart of this unit, you will find a Marvell 88F6820 dual-core SoC operating at 1.8GHz paired with 512MB of DDR3, Micron for our sample. NAND flash is coming from Spansion with 256MB capacity.

As for radios, we have two Marvell 88W8964 each having its own cache of DRAM at 128MB, the radios are pushed by Skyworks amplifiers - SKY85309 for the 2.4GHz band and SKY85728 for the 5GHz band. A unique feature is the 5GHz DFS monitoring radio for 160MHz functionality also from Marvell. 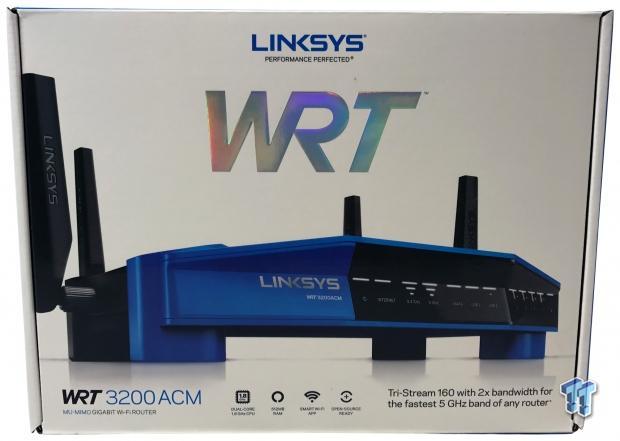 Packaging is certainly eye-catching for the 3200ACM. On the front, we find an image of the router and down below a few marketing details. 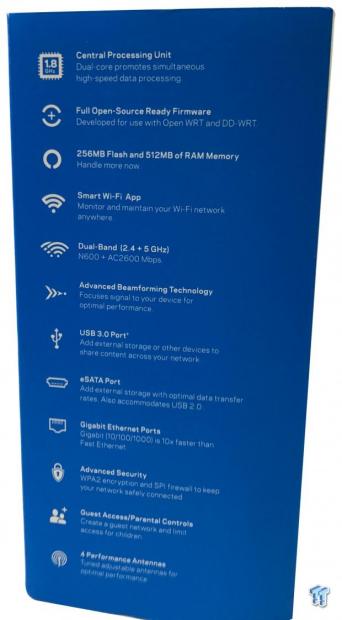 The spine gives a full specs list including the CPU speed, memory, and connectivity options. 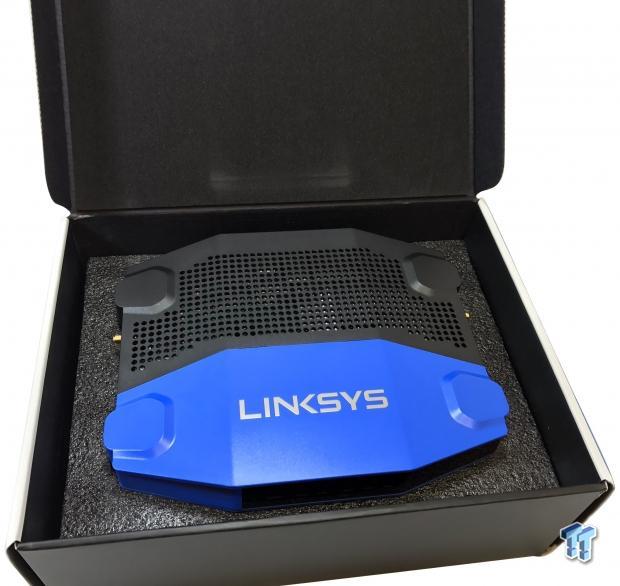 The whole packaging experience isn't as good with the 3200ACM as it was with the original WRT1900 but Linksys has put some thought into it. 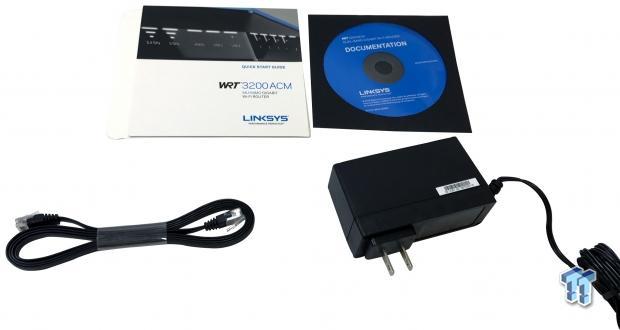 The scope of delivery includes documentation on disk, Ethernet cable, and the power adapter. 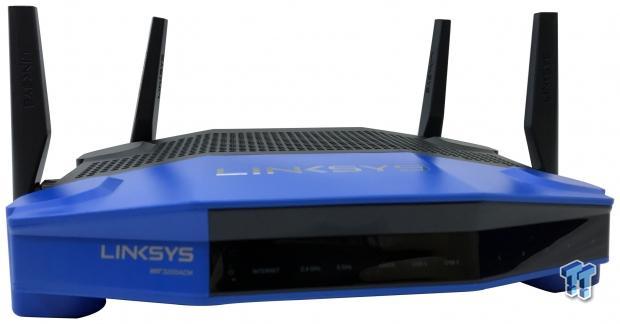 The front of the router is identical to the rest of the WRT series. 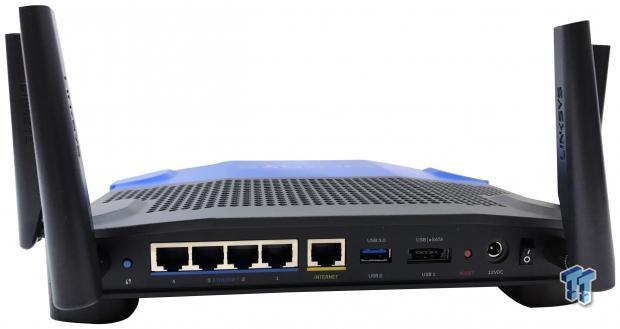 The rear I/O starts with the WPS button on the far left followed by the gigabit LAN and WAN. We then have the USB 3.0 port for storage and the eSATAp. Reset is in red and the power input 12V 3A. 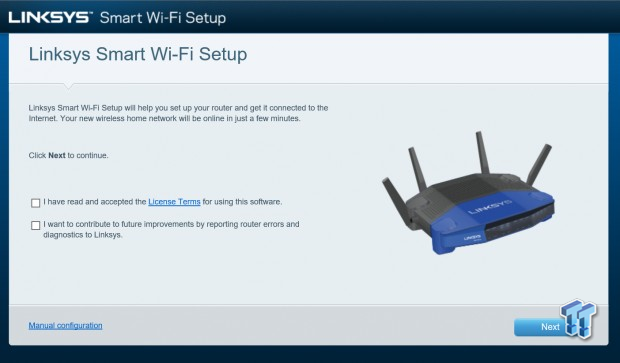 Since Linksys went to the Smart Wi-Fi firmware, these solutions have been some of the easiest to setup. The process starts with you accepting the license and clicking next. 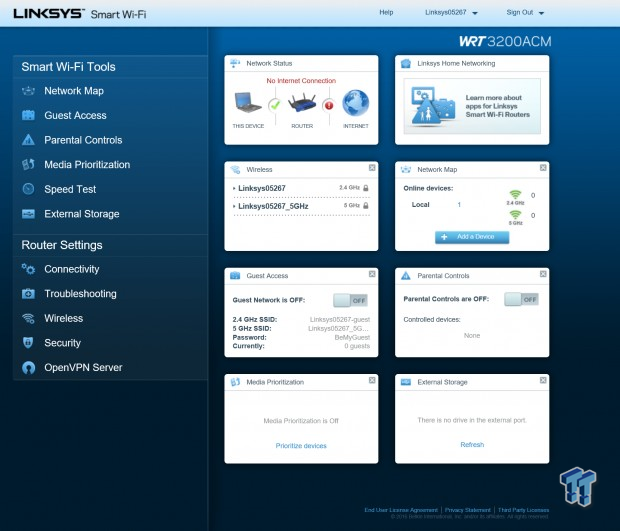 The dashboard gives you a quick glance at things going on in your network. 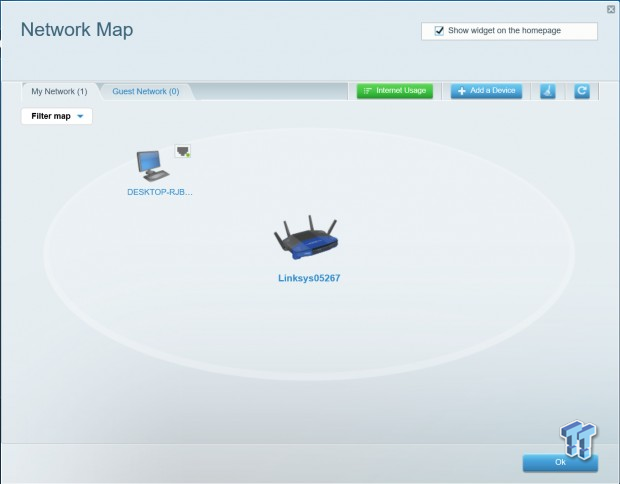 Starting from the top, we have the network map. This shows you every device by connection type that is connected to the router. 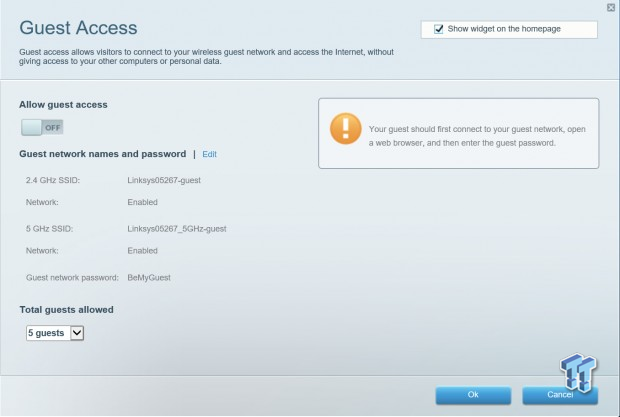 Guest access allows you to regulate network traffic for friends or if you own a business, customers. 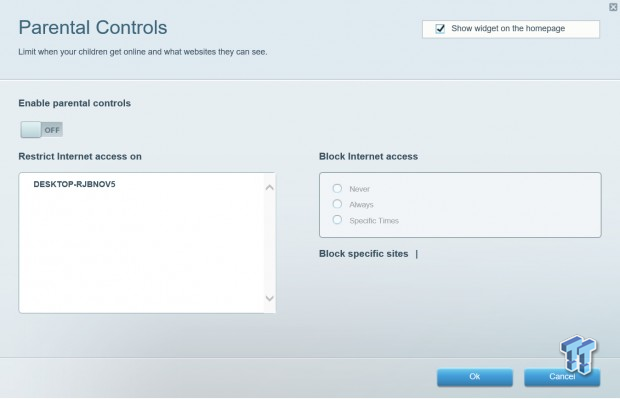 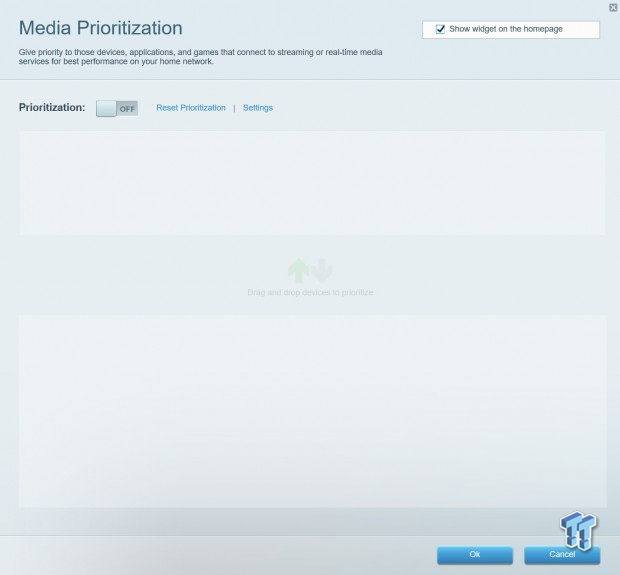 Media Prioritization allows you to give more bandwidth to devices that stream content. 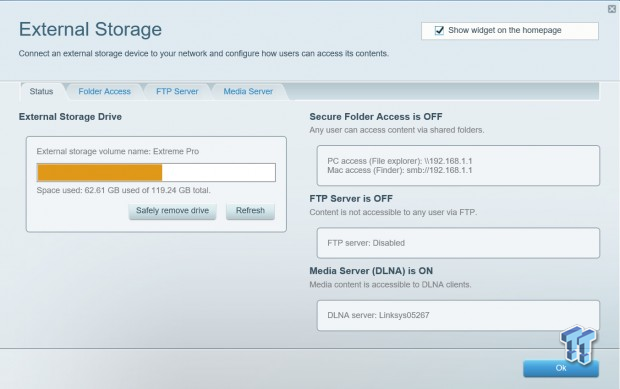 External drive, whether it's via USB 3.0 or eSATAp, will show up here. You have access to folders, FTP, and a basic media server. 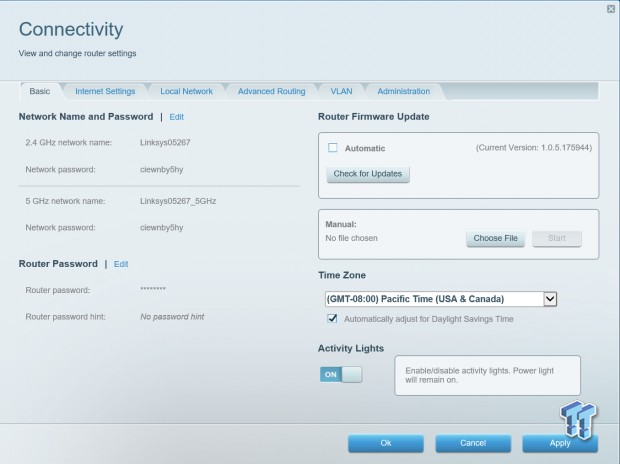 Connectivity is where you can change SSIDs, update router firmware along with advanced settings like VLAN. 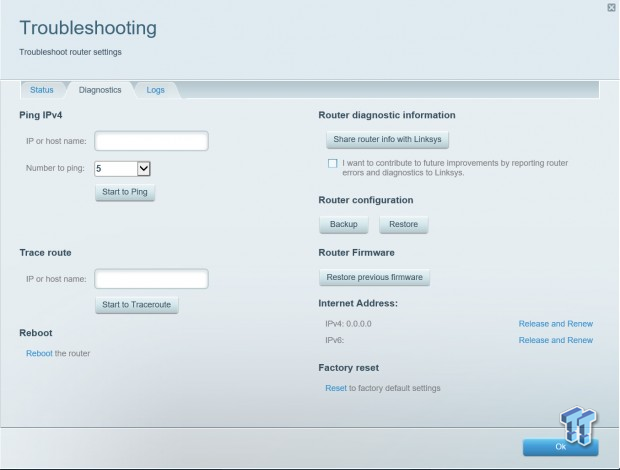 Troubleshooting allows you to factory reset the router, backup and restore configurations and downgrade firmware. 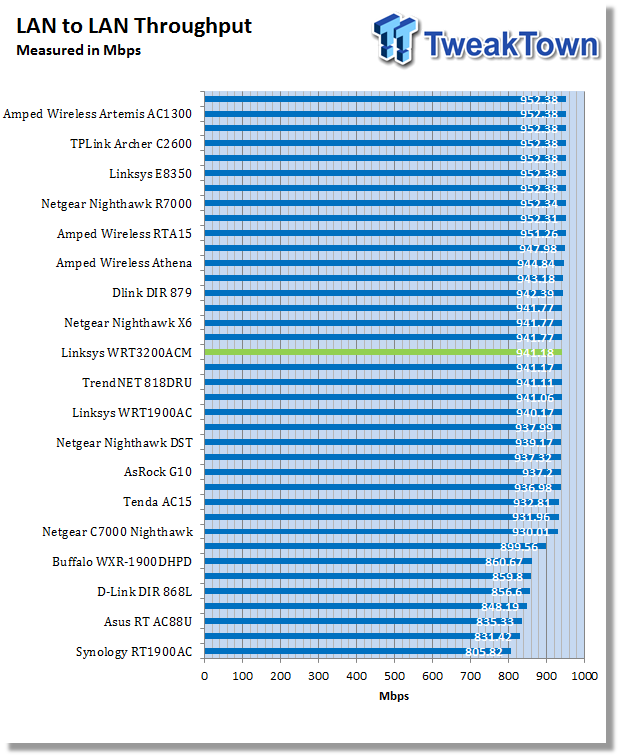 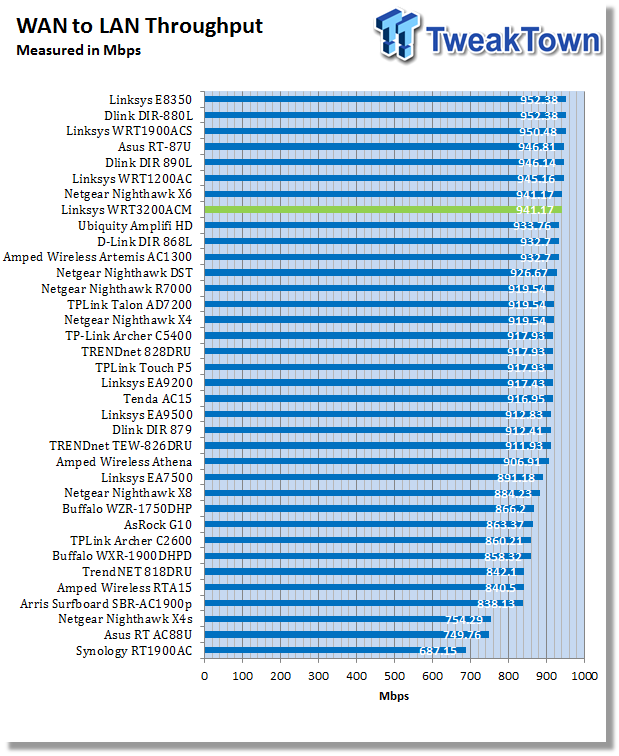 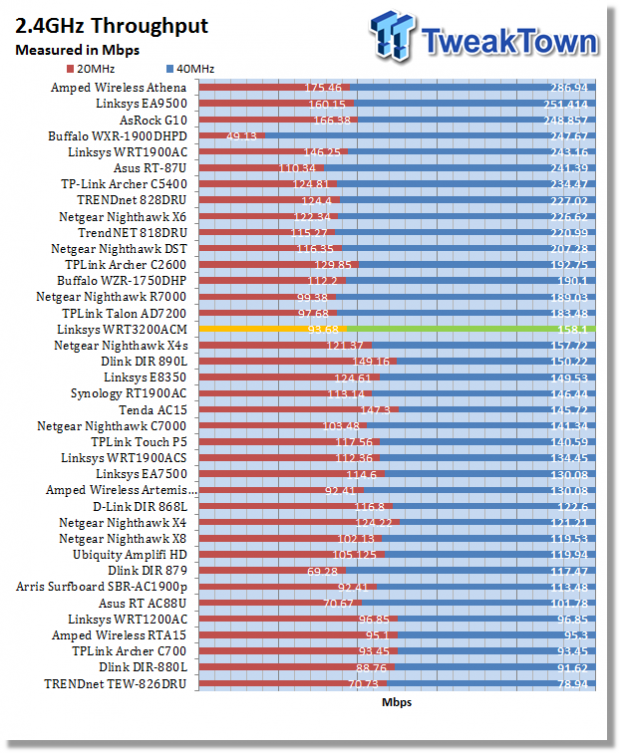 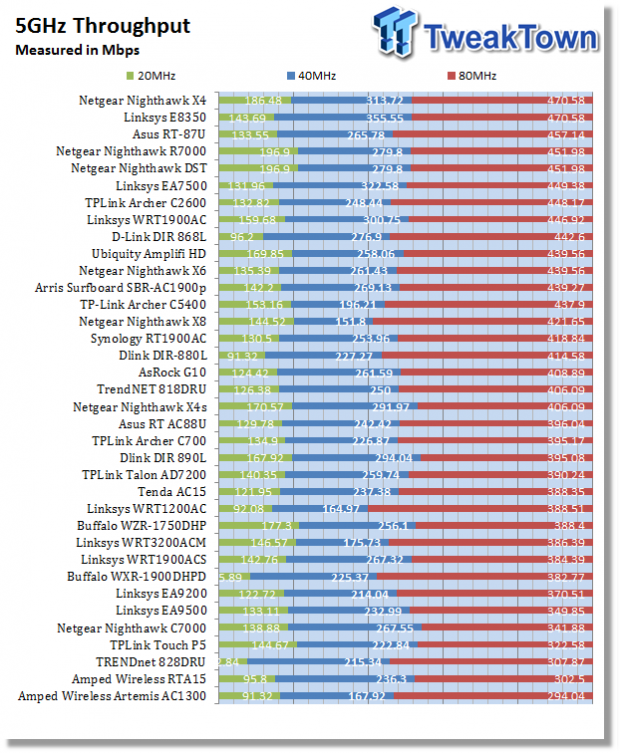 Our file transfer test has matured over the last few months. Initially, I was using an ISO file to transfer back and forth across the network, then I moved to using ATTO by mapping a network drive. For the last few months, I have been using NASTester 1.7 and the 100M and 1000M file sizes. 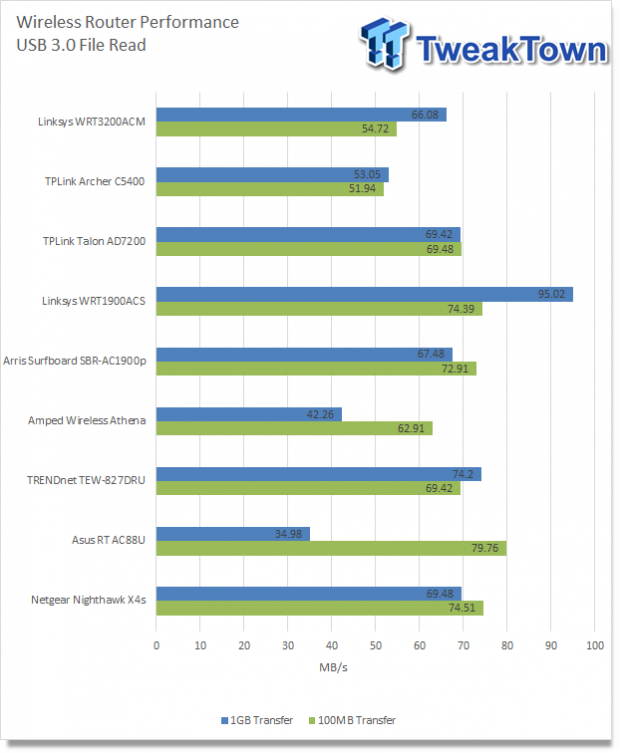 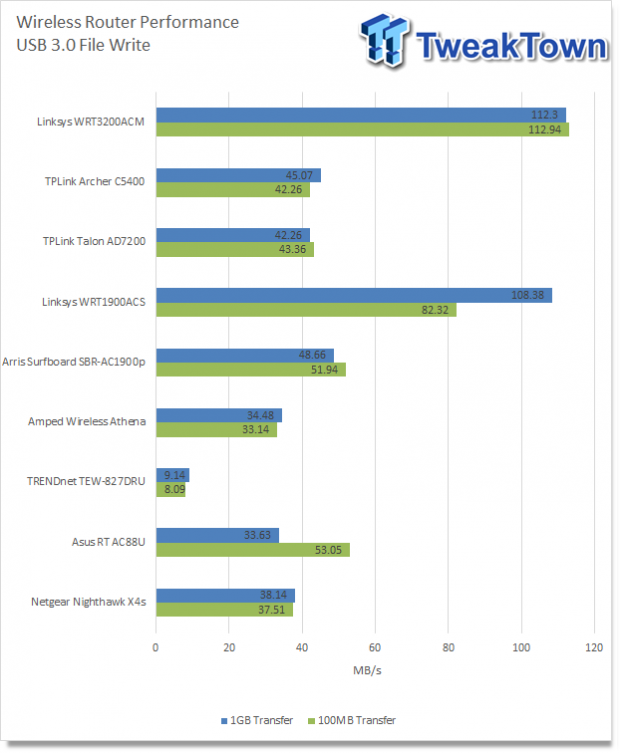 The WRT3200M doesn't disappoint when it comes to storage. I could get 112 MB/s write with the 100MB transfer size and 112.3 MB/s with the 1GB transfer. The only thing holding this back from being even faster was the gigabit link to our test system.

Read performance was down quite a bit at 54 and 66 MB/s, maybe Linksys will tune the firmware for a better balance?

Looking at Linksys' portfolio, they have 28 routers listed. These range from the infamous WRT54GL to the latest WRT3200ACM and everything in between. If one vendor can have 28 solutions for you and there are a plethora of vendors - you see where I am going - the market is crowded with choices.

With that said, what you want to know is, "Is this router worthy?" The short answer is "Yes." The build quality is quite good with this solution including fit of the plastics, the front white LEDs while they can be too much for some can be turned off in software. The overall software platform is very easy to setup and manage and even has its own app for Android and iOS.

As far as performance is concerned, this solution will certainly get you the most through its wired connections, but as far as wireless is concerned, it does slip back towards the middle of the pack. Our 2.4GHz throughput testing came in at 158 Mbps on the 40MHz band, and the 5GHz throughput topped out at 386 Mbps on the 80MHz band. Results, of course, will vary based on distance and all of my testing is done at 15ft.

I would have loved to take the 160MHz band for a test, but unfortunately, there are no consumer devices taking advantage of this quite yet but Linksys does have another trick up its sleeve, and that starts with USB 3.0. Storage on this solution is fantastic, probably one of the best I have seen right with the Netgear X8.

For those wanting a router that can possibly take over NAS duties, they are few and far between, but the WRT3200ACM delivers.

The Bottom Line: Adding to the legacy of the WRT brand, the Linksys WRT3200ACM Smart Wi-Fi Router is a future proof platform with ample performance in both storage and networking.