Yep, we all know the drill. A group of alien spaceships break through Earth's atmosphere and settle at strategic locations around the globe, before proceeding to lay waste to humankind's key landmarks in a fiery apocalypse. But while it makes good on the first two plot points, Arrival is certainly no Independence Day; diverging into what could be one of the smartest science fiction films in recent memory.

It's an adult, complex, and multi-layered film which seeks to treats audiences with respect while refusing to give up all the answers straight up - allowing for a voyage of discovery to unravel before our eyes. 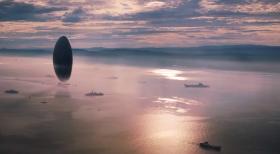 When several oblong shaped alien ships arrive throughout the world, the inability for successful communications with the visitors causes consternation amongst humankind unsure of why they're here and what their intentions are. Linguistics expert Dr. Louise Banks (Amy Adams) and physicist Ian Donnelly (Jeremy Renner) join the first contact group to help break the language gridlock, but their progress is hampered by the complexity and meaning behind the visitor's language. Suspicion quickly spirals into the threat of warfare when an incoming alien communication is translated as an open threat of hostility. Will this defining moment for the world also lead to the end of it? 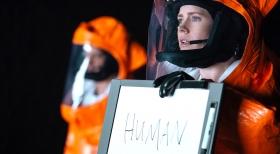 Hollywood is certainly capable of leapfrogging sci-fi schlock like Independence Day or Battle: Los Angeles., with more, shall we say, 'sophisticated sci-fi' with entries such as Contact, Interstellar, and The Martian.

But even so, Arrival seems to transcend those, with a mature, almost art-house sensibilities, an excellent cast, a script that rarely falls back on cliché, and truly superb direction that rewards attention. In fact, there's so much intricate layering going on in Arrival, that it's going to be fodder for film students for years to come. 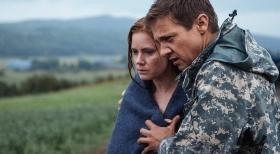 The heart and soul of Arrival rests almost entirely with actress Amy Adams; a nuanced actress who seems to effortlessly glide through whatever role is required of her. In Arrival, not only is she entirely believable as a driven language expert, she plays it with equal parts sophistication and vulnerability - cognizant not only of the limitless opportunities provided by successful contact with an alien species but the dire ramifications if she fails. Jeremy Renner is perhaps a little understated as her offsider, but their flowering relationship is a joy to see, leading to a surprising revelation late in the game. 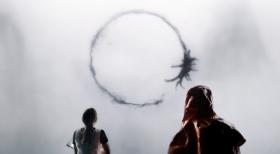 While Director Denis Villeneuve isn't quite what you would call a household name, the young filmmaker has helmed some critically adored pictures in recent years, such as Sicario, Prisoners, and Enemy. Villeneuve clearly has a clear vision, an articulate eye for detail and the talent to pull off some unconventional tactics, all which add up to make Arrival one of the most memorable sci-fi features of recent years.

In lesser hands, I'd be quite concerned about his next feature; the much-anticipated sequel to Blade Runner, but if anyone can step into the shoes of Ridley Scott, it's him. 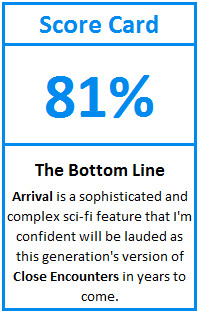