The last of the Crucial RAM trio is what has our attention here today. While we have seen the abilities of the mainstream Ballistix LT memory and even had our go with the Ballistix Tactical series, it is now time to look at what Crucial bills as their top-tier offering in DDR4 currently. That would bring us to their Ballistix Elite series, which we have tested previously to this in the quad-channel formed kits with our X99 system, but this is the first we have seen them in a dual channel configuration, or at this speed.

The Ballistix Elite tested today is the higher speed of the three choices, 3200MHz, 3000MHz, or 2666MHz, and are currently available in 4GB sticks or kits of up to 32GB in density. Our BLE8G4D30AEEA.K16FE kit not only runs at 3000MHz, but it is timed at 15-16-16-35 2T using 1.35V. If this looks familiar, that is because this kit is set up exactly as the Ballistix Tactical were. These dual-sided sticks do sport an entirely different heat spreader, but under the hood, we find that these Samsung IC based sticks are much the same as the Tactical series we just looked at.

With what we have seen with both the Sport LT, and Tactical series RAM, not only do they perform better than others in their league, they both have an appreciable aesthetic appeal, but the flexibility in timings was impressive, even though we found limited raw speed when trying to overclock. So if this trend carries through, and we are now dealing with their top tier as far as their series line-up is concerned, we imagine at this point, we should see slight improvements over the Ballistix Tactical, but we are also hoping that we get more flexibility and find these to be truly impressive. 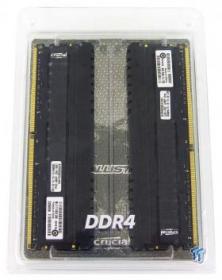 No matter which series you buy from Crucial, they all use the same packaging where the diamond plate look is offered on the cardboard insert, and clear plastic is leaving the RAM on full display. On the Ballistic Elite, we see both stickers are moved to one end of the sticks but are still packaged with them showing to get all of the information in just a glance. 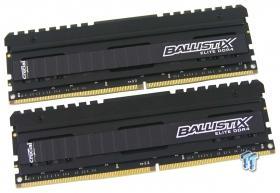 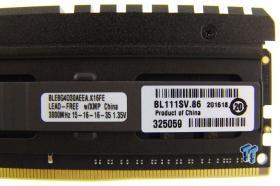 Moving in closer to see the product sticker, we get a feel for the texture of the metal and the black painted finish of the spreaders covering the black PCBs. We also see that this kit of BLE8G4D30AEEA.K16FE supports XMP 2.0 with 3000MHz speed and 15-16-16-35 2T timings, drawing 1.35V to accomplish this.

With eight rectangular protrusions to either side, the center of the top header component offers the same Ballistix Elite DDR4 naming we saw on the side. Unlike the previous pair of kits, just one look tells anyone what RAM is on the motherboard. 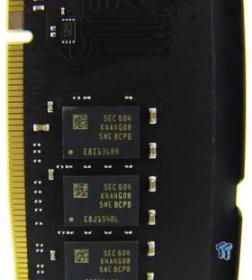 Removing screws from the header, and then removing one of the spreaders, we find the same Samsung ICs we found in the Ballistix Tactical kit. Unlike the others which used thermal tape, there are thermal pads used in the Elite series. 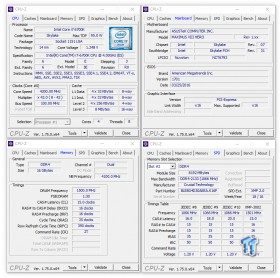 Using the built-in XMP 2.0 profile that these Ballistix Elite offer us to use, we find everything is as advertised. There is 16GB in density, it runs at 3000MHz, and we did get the 15-16-16-35 2T timings the sticker shows we should be running. 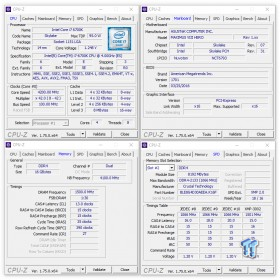 Upping the voltage to the memory 0.10V, we tried to lower the timings. While the CAS seemed to have a bit of flexibility, the tRCD and tRP were less forgiving. We also attempted to try to run these with 1T command rate, but in this instance, it caused instant instability. 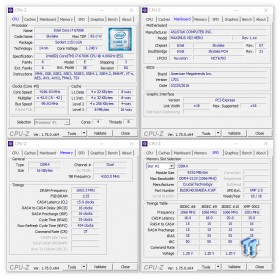 Still using slightly more voltage than the XMP profile requires, we attempted to push the speed of this kit upward. We ran into a wall with this kit at 3333, which is 333MHz over the XMP profile, but 33MHz slower than what we got from the Ballistix Tactical. 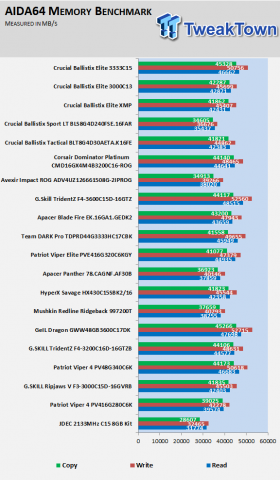 Using AIDA64 to test out the bandwidth, we see the Ballistix Elite nearly matches the Ballistix Tactical kit, even if just slightly ahead of it, but within a margin of error. They then also compete with others in their speed range and is what we expected to see from this set. Slightly lower timings seem to help here, but the 333MHz boost in speed has the most marked advantages. 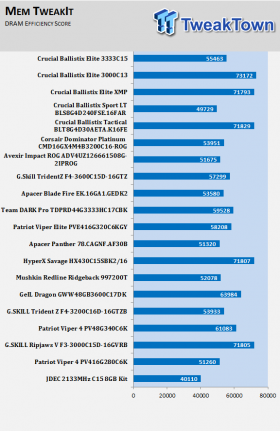 Mem TweakIt shows us what we saw with the Ballistix Tactical kit. Using the XMP profile, and even with reduced timings, the Ballistix Elite is stellar in their performance, but raising the speed seems to kill them when it comes to this efficiency formula. 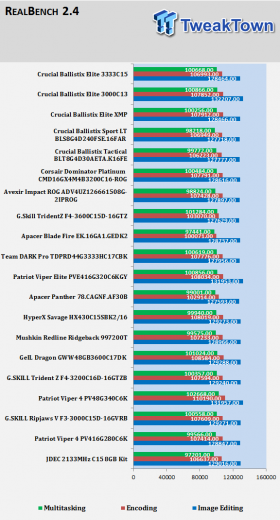 Moving on to RealBench to compare, the Ballistix Elite RAM steps it up just a bit. The results are better than the similar Tactical RAM, and it performs better than some of the faster kits in the chart. Overall speed is not the answer for productivity with this kit either, as we only showed improvements by lowering the timings.

Being completely honest, outside of the upgraded looks of the heat spreaders moving from the Ballistix Tactical to the Ballistix Elite options, we were sort of disappointed in a way. While the XMP 2.0 profiles settings do slightly best the Ballistix Tactical, using the same things under the hood, if it were a blind test, we would not have assumed these to be the top of the line offerings. Of course, our overclocking abilities do play into this, and we know it is mostly the luck of the draw when it comes to overhead in ICs, but the only change to the kits is in the heat spreader design, that's it. 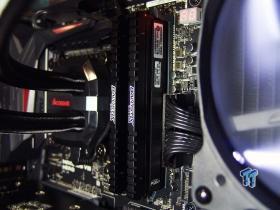 Not to completely kick the Ballistix Elite RAM in the grapes, as it does best, even if slightly, the results the Ballistix Tactical had to offer, they do still do very well for themselves. They not only best their little brother, but again they take on the Savage and Ripjaws V, and these are kits that many users would go to just by name recognition alone. In order to best both offerings, the Ballistix Elite look much like the Savage, looks better than the Ripjaws in our opinion, and do feel like an impressive product when holding them and looking at them.

What is going to make or break this deal all depends on the pricing. As we look around, recalling back to the $77.99 pricing of the Ballistix Tactical, while the HyperX Savage still costs slightly more, the RipjawsV are priced near the tactical kits. So in essence, whether buying them direct from Crucial for $109.99, grabbing them at Amazon for $139.99 or at Newegg for $109.99, you are at the upper end of pricing for the speed and density offered. Cost does hurt our overall view of the Crucial Ballistix Elite DDR4-3000 16GB kit, as no matter how much we like the heat spreader design and XMP performance, we can find other solid black RAM for less money involved in the acquisition.

The Bottom Line: Crucial's Ballistix Elite DDR4 kits are nice to look at and performance is there to be had. However, the lackluster overclocking and higher pricing leaves us wanting to venture toward more affordable offerings.