Lexar's Portable SSD is by no means a terrible solution, it offers average performance for portable SSDs. For those consumers just getting into the market, this drive would benefit from a more aggressive price.

Typically, external SSDs utilize a basic shape or form factor. As of late, with the introduction of the T1 and T3 from Samsung and SanDisk now offering the Extreme 500, we have seen custom form factors being deployed.

Late 2014, Lexar deployed the Workflow lineup of portable solutions. These ranged from 256GB and 512GB flash models to card readers including microSD, SD and Compact Flash. Now nearly a year and a few months later, Lexar has revamped this lineup with higher performance and a new name, the Lexar Portable SSD.

Like the previous Workflow lineup, this new range of products comes in 256GB and 512GB flavors, though performance has been increased and we, of course, have entirely new packaging and marketing. Performance numbers on this solution are allowing 450 MB/s read and 250 MB/s write while being compatible with both OS X 10.6+ and Windows 7+.

MSRP of the Lexar Portable SSD in the 256GB capacity is listed at $129.99 with a two-year warranty. 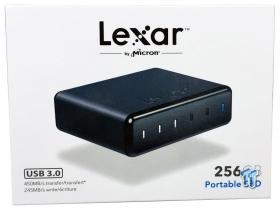 Packaging for the Lexar includes an image of the drive centered while performance numbers and capacity are listed below.

The back of the box shows requirements in several languages.

The scope of delivery is quite simple with a USB 3.0 cable and the portable SSD.

The front of the device has a set of LEDs that denote the filled capacity of the drive.

The backside of the drive houses just the USB 3.0 connection. 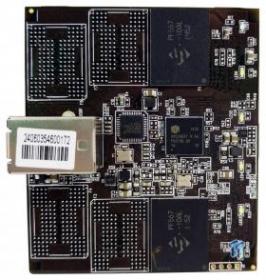 Internally, Lexar has paired the ASMedia 1053 with the SM2246XT. The SM2246XT is a 2-channel DRAM-less variant of their SM2246EN 4-channel mainstream SSD controller. This controller was used in the SanDisk Extreme 500 as well. 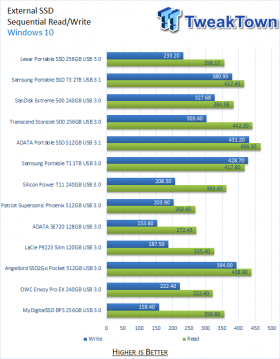 The performance of the Lexar Portable SSD was right on par with expectations. I was able to reach 356 MB/s read and 233 MB/s write on our Z97 test system. 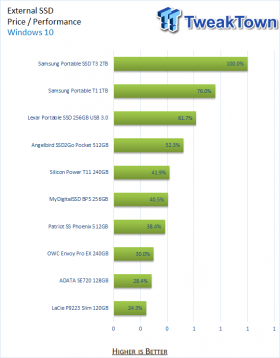 At the time of writing, the Lexar Portable SSD is hovering around 50 cents per GB. Taking into account the drive's performance, we find it landing behind both of Samsung's offerings at 61%.

With portable SSDs now reaching amazing capacities of 2TB and NAND prices still slowly falling, these drives have become more affordable than ever. The Lexar Portable SSD is on the high-end of these solutions, and while cost is definitely a concern, they have built this solution quite well.

The performance was acceptable but could have been better especially in this tight market segment, though Lexar does have a whole eco-system going with this lineup that includes hubs and readers, so that too is taken into consideration. As seen in my testing, I was able to reach 356 MB/s read and 233 MB/s write - average performance for USB 3.0 SSDs. For those wanting to stick with this lineup, the 512GB model is sure to produce a little more performance in read operations.

Overall, the Lexar Portable SSD is a solid performer if you are already tied into the Workflow eco-system, but if you are just in the market for an SSD to take with you on the go, the SanDisk Extreme 500 is $50 cheaper and offers the same performance.

The Bottom Line: Lexar's Portable SSD is by no means a terrible solution, it offers average performance for portable SSDs. For those consumers just getting into the market, this drive would benefit from a more aggressive price.