If you are one that is looking for alternative to running lengths of ethernet cable to an upstairs destination, the Actiontec WCB6200Q may be a solid alternative.

For many, the typical wireless network extender is something that is connected via running a length of Ethernet cable or wirelessly. Unknown to myself until a few short months ago there is another standard that is beginning to emerge, MoCA or Multimedia over Coax Alliance.

A few months ago, I was contacted by Actiontec shortly after they launched their latest MoCA network extender, the WCB6200Q. This solution supports the latest bonded MoCA standard in version two along with being compliant to 802.11ac with its dual-band configuration.

This extender requires that your existing router supports MoCA or optionally you can purchase an adapter such as the ECB6200, which Actiontec sent over for testing. The dual-band radios on this solution are capable of 600Mbps on the 2.4GHz band and 1300 Mbps on the 5GHz band using a 4x4 radio configuration while also having dual Gigabit Ethernet ports on the back of the unit.

The packaging for the Actiontec WCB6200Q was quite simple, plain brown boxes for both the extender on the left and ECB6200 adapter to the right. 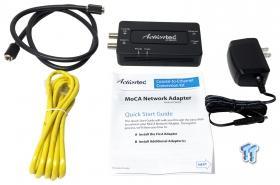 The scope of delivery for the ECB6200 is seen above. It includes a short coaxial cable, power adapter, and Ethernet cable.

A closer look at the adapter reveals two LEDs on the front edge of the device while two coaxial ports flank the left and Ethernet is to the right. 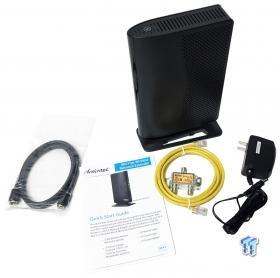 Moving on, we have the scope of delivery for the other box, the WCB6200Q. Things are quite similar with an Ethernet cable, power adapter, and coaxial cable, but this does include a splitter as well. 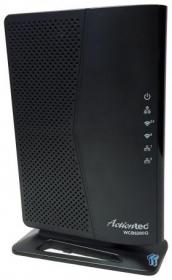 The front of the extender houses six LEDs from which you can gather information about power, the coaxial connection along with wireless activity and Ethernet.

As I mentioned very briefly, the extender does have two gigabit Ethernet ports on the back of the device, along with its coaxial input and reset button. 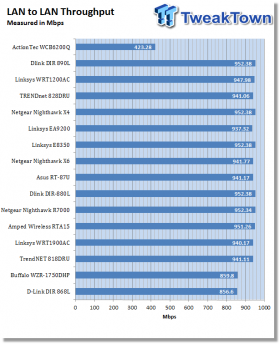 To test the WCB6200Q, I made a trip to the basement of my home and set this solution up as any typical consumer would using existing coaxial cable. The cable I used was a fifty-foot run that goes from the basement to my office and is an RG8 coaxial. In the basement, I deployed the ECB6200 adapter with Ethernet and coaxial connections, and in my office, the extender was set up and connected to the test PC via LAN. As you can see above, I wasn't quite able to get the Actiontec to enter the enhanced mode to reach full performance and as you can see peaked out at 432 Mbps. 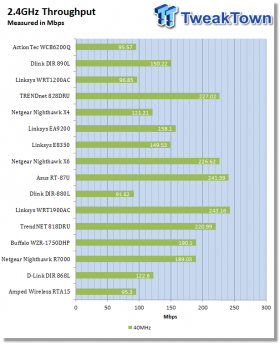 Doing a simple LAN to 2.4GHz test, the Actiontec was able to produce 95 Mbps. 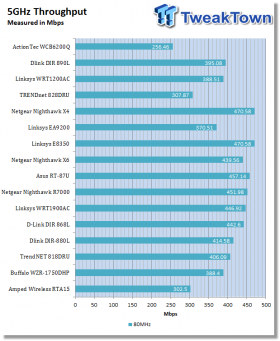 Moving over to 5GHz, the Actiontec device did quite a bit better reaching 245 Mbps.

With MoCA being a completely new technology to me, I'm sure somewhere in testing I may have messed something up. With that said, I tinkered with this solution for over a month and always came up with the same results leaving me thinking it may need a firmware update. At any rate, I do like this technology and see where it can be quite useful for large building or rentals with multiple floors. And that leads me to the build quality, which I thought was quite good. It's at least up to par with every network extender I have tested and that includes all the major vendors.

Performance, as seen, could use some help, whether that be me figuring out how to get this device into the enhanced mode or Actiontec releasing a firmware update to get there. In testing, I was able to reach 432 Mbps over LAN, 95 Mbps over 2.4GHz and 245 Mbps on 5GHz.

Overall, I can only recommend this device to those who don't have the access or means to run CAT5 or CAT6 cable where they need it. This device is much better than powerline networking and a solid alternative to the traditional wireless network extenders.

The Bottom Line: If you are one that is looking for alternative to running lengths of ethernet cable to an upstairs destination, the Actiontec WCB6200Q may be a solid alternative.