Let down mostly by a lack of accessories, the well-priced ROCCAT Syva is suitable for all applications, and will not disappoint in the sound department considering the price.

In-ear headsets or headphones are often overlooked by most consumers and manufacturers alike. They are treated as somewhat of the 'child under the stairs' in the fact that most gaming brands seem to have an in-ear contingent (Razer, Tt eSPORTS, ROCCAT etc.), but marketing, product launches and focus is aimed at the on-ear and over-ear audio lines. 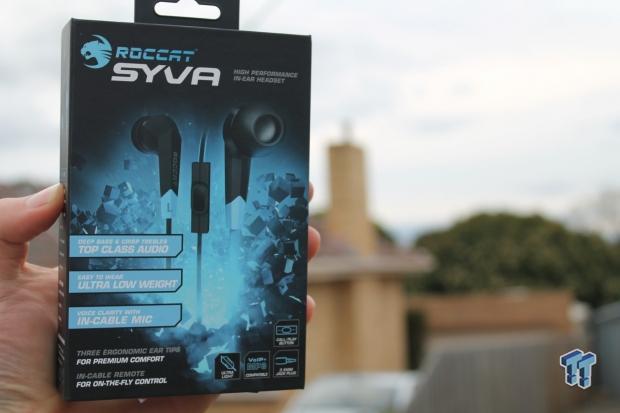 In a bid to 'help out the little guy', I reached out to some companies in order to get my hands on in-ear devices. I've already published my thoughts on the Tt eSPORTS Isurus Pro, and I currently have a set of the SHURE SE112m+'s sitting next to me to try on next, with this review focusing on the ROCCAT Syva. All gaming company in-ear headsets so far have ranked fairly well in the sound and comfort departments, providing a viable solution for gaming on the go or music/speech when in transit. Will the ROCCAT Syva set itself apart from the rest?

Lead by the quote from Dr. Erik J. Dale, a 'ROCCAT Scientist', which reads "The most important thing in communication is to hear what isn't being said," ROCCAT instantly makes the claim that this product will provide consumers with unmatched quality and clarity in all applications. 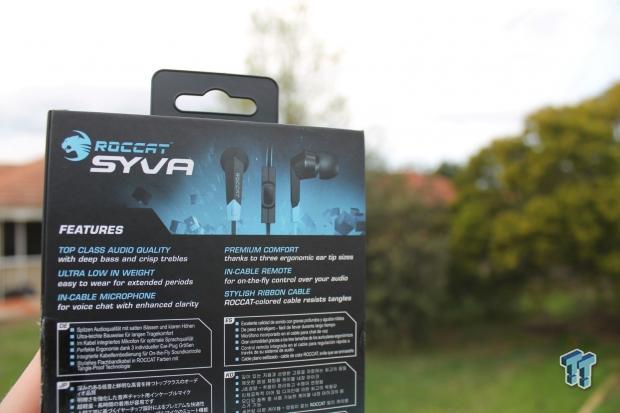 The internal 10mm drivers showcase a maximum SPL at 1kHz of 96dB, an impedance of 32 Ohms and a frequency response of 20Hz-20KHz. With this frequency response being identical to the previously-reviewed Tt eSPORTS Isurus Pro earphones, all other features listed above are close in value too. The microphone offers a sensitivity of -44 +/- 3dB at 1KHZ, an impedance of <2.2kOhms, and picks up sound in an omni-directional pattern. Once again, this rating is almost-identical to previously reviewed products. The 3.5mm jack connection is not gold plated like some, but to be honest, that doesn't really matter that much anyway.

Priced at $28.44 from Amazon at the time of writing, this in-ear headset is well-priced and under average pricing as seen with competing brands. Most other gaming models are typically $30-$35, meaning ROCCAT has hit the pricing nail on the head with the Syva in this department.

Maybe it's the lower price-point, but the Syva doesn't come with the accessories I'm looking for. With other brands providing a myriad of accessories and options in all products, I was expecting the Syva to come with at least a case sticker and small carry pouch; unfortunately these were left out. 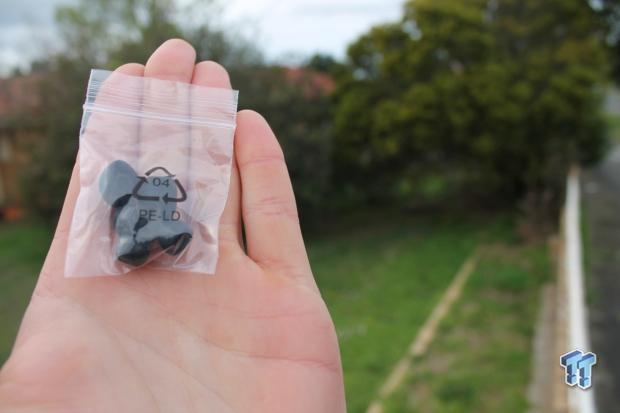 Included are different sized rubber ear grommets and a user manual, once again devoid of a carry pouch to keep your products safe. Generally, when audio peripherals I review arrive devoid of carry pouches, I soar off on a tangent about how useful they are, but I'm sure you'll have a bit of an idea now as to why they are needed. If you're buying a product for its portability and with travel in mind, pouches help protect against wear, tear and loss of accessories. The sticker issue may be a laughing matter for some, but as a previous peripheral manufacturer employee, I would receive hundreds of emails and Facebook messages each year asking for stickers for fans to stick on laptops, desktop cases, and phones.

I may have ranted about the lack of accessories a little too much, but in the end that is nothing compared to the comfort factor. How do they feel? 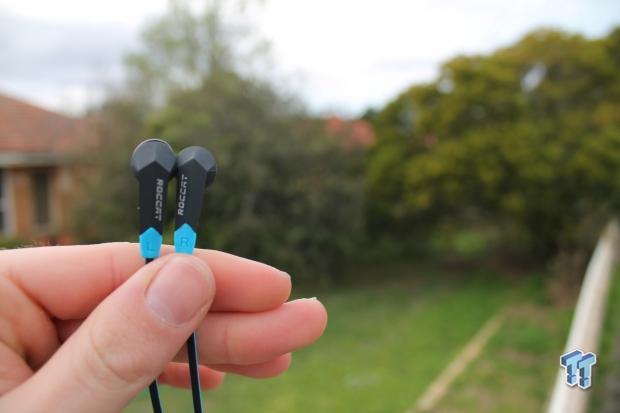 Great, is the answer. These earphones caused me no discomfort on one hour or more public transport journeys, whilst easily blocking out the sound of screeching train tracks and commuters around me talking about various topics. There isn't too much transfer noise through the cable either, with some other headsets ensuring that every single time the cable rubs on your clothing or backpack it will transfer directly into the ear bud. I would assume this positive is due to this product being released with a flat cable. 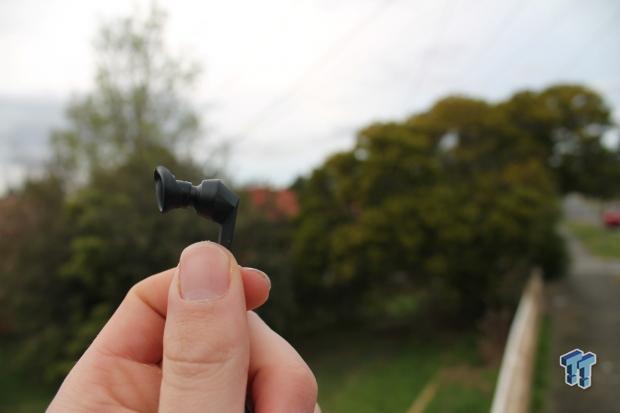 The issue with these earphones came when taking them out of your ear or pocket. It seems that the rubber grommet ear plugs grip almost too much in addition to having a weak connection to the headset body. On quite a few occasions when taking them out of my ear, the ear grommet would turn almost inside out and slide halfway off the body (see above). This became more of an issue when at one stage the left hand earpiece fell off completely when taking the Syva out of my pocket as it gripped on the inside of my jeans. 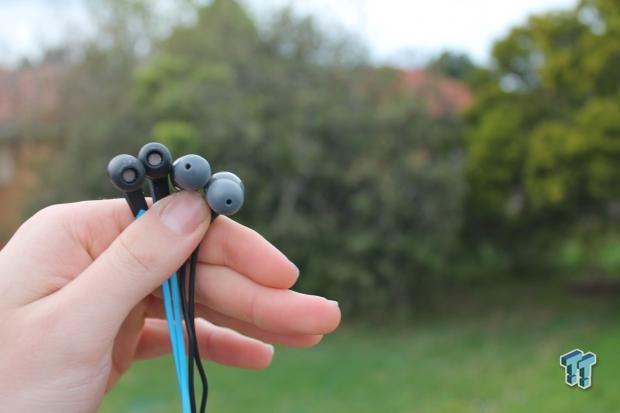 There is a hint of punchy bass, the clarity is fairly crisp, and it passively blocks out a lot of outside noise. But with the specifications, pricing and comfort being almost identical to numerous other products on the market, it's hard to set this one apart. Quiet tracks fare reasonably, seeing Twenty One Pilots' 'Ode To Sleep' report back fairly good overall sound, the clarity is slightly better than the Tt eSPORTS Isurus Pro headphones.

Some chilled out rap music from Nas also fares well, showcasing a hint of punchy bass when each beat hits.

As I said previously, this product nails the price point well, but it doesn't exactly offer anything different to the others. It fits well in my ear, I think it looks great, and the ribbon cable is a good idea, but it's another simple earphone product just like the rest.

A different look: The ROCCAT color scheme coupled with a flat cable looks different and I think it's great. 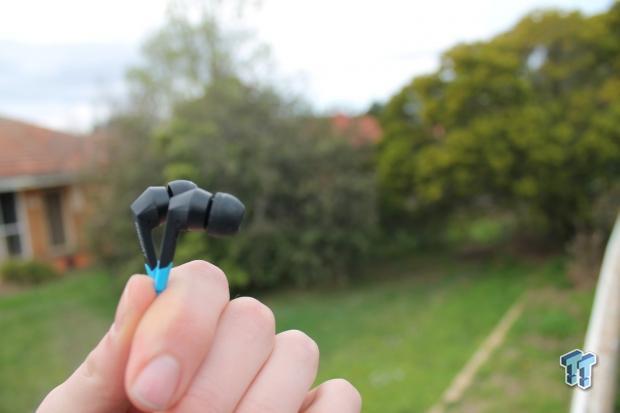 For all sizes: The three different rubber ear grommets ensure everyone can have a go.

Sound quality: There's just a little extra clarity than all the others.

Nothing different: Although I think it looks good and has slightly improved clarity, it's basically the same as the rest in most regards. 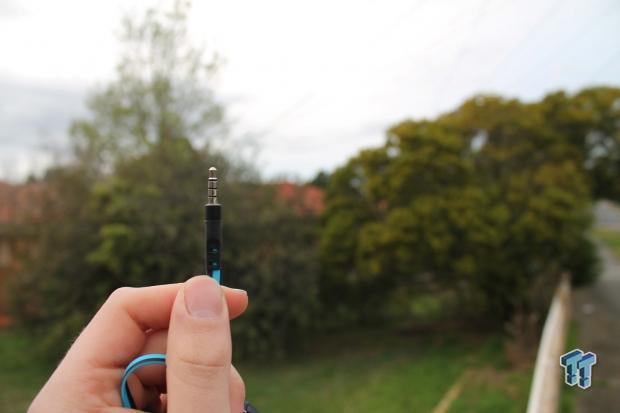 The Accessories: A carry pouch, please.

As stated previously, the Syva performs reasonably well, it's priced well, but is ultimately let down by a lack of accessories and a weak rubber ear grommet connection to the headset body. 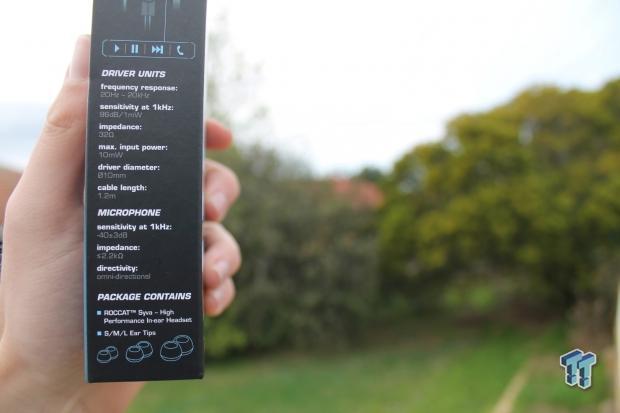 These negatives certainly wouldn't deter me from recommending this headset to you or your friends, but if you're looking for something to set yourself above the rest, the ROCCAT Syva in-ear headset is not that product, but it's not that bad either having said that.

The Bottom Line: Let down mostly by a lack of accessories, the well-priced ROCCAT Syva is suitable for all applications, and will not disappoint in the sound department considering the price.