SilverStone's TS431S offers a secure enclosure for connecting up to four of your SATA or SAS hard drives or SSDs. With the miniSAS interface, the TS431S is capable of great performance depending on the mix of drives and controller used.

In the past, we have looked at quite a few enclosures from a number of vendors including SilverStone. However, most of these solutions utilized either eSATA or USB 3.0, not that either of those are a bad thing, but they don't quite offer the same level of functionality as SAS.

The SilverStone TS431S is a four bay enclosure allowing users to install either four SATA or SAS enabled hard drives. Drive capacities upwards of 6TB are supported allowing the total enclosure a capacity ceiling of 24TB. Even with all of that said, the TS431S does offer a rather unique feature in that it uses a MiniSAS interface so consumers can use their favourite HBA or RAID card to setup and enable RAID arrays if they so choose.

Additional features of this enclosure include tool-less drive installation with SECC steel and aluminium construction. To aide in cooling your drives, the TS431S includes dual 60mm fans and a built-in power supply, so you don't have excessive cables running from the unit.

Operating system compatibility for the TS431S includes support for Windows XP, Vista and 7, along with OS X10.1+ and Linux kernel 2.6.3+. 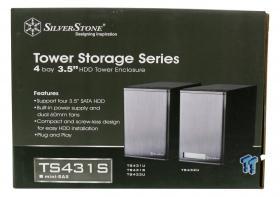 Packaging for the TS431S is shared between several models. With that said, the model number for this solution is carved out in bold lettering to the left with features listed above. 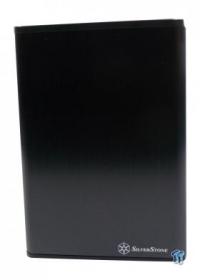 The front of the enclosure hides away all the drive bays with a solid aluminium door the bottom right carries a SilverStone logo. 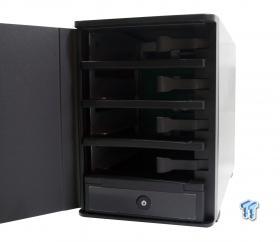 Opening the door, you will find each of the four drive bays, of course with these being tool-less, they have just a hook on the right side of the bay. Down below is the power button centered on the enclosure. 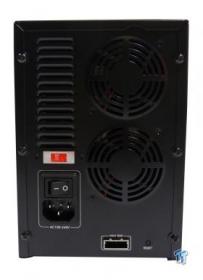 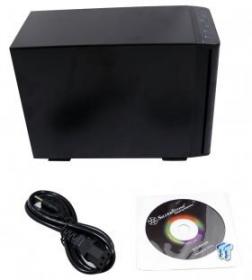 Scope of delivery for the SilverStone TS431S includes the power cord and manual on disc.

To test the performance of the SilverStone TS431S, we connected the enclosure to our Adaptec 78165 6Gb/s RAID controller utilizing four Seagate 600 Pro 200GB SSDs. 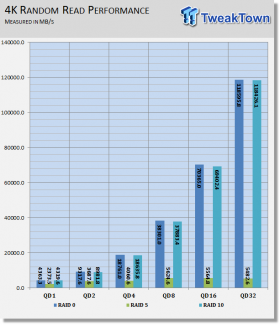 Random read performance with RAID 0 started out at 4300 IOPS at QD1 reaching a peak of 118K IOPS at QD32. Moving over to RAID 5, the array managed a pretty steady 5500 IOPS across the entire range of queue depths. RAID 10 picked things back up with QD1 coming in at 4300 IOPS peaking out at the same 118K IOPS we found with RAID 0. 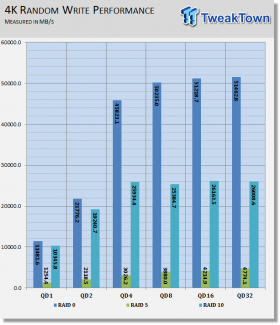 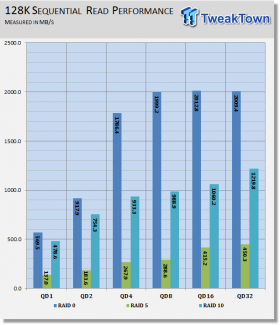 Throughout sequential read testing, the TS431S did quite well - we were able to achieve results a touch over 2000 MB/s with RAID 0, while RAD 10 produced 1219 MB/s at QD32. RAIDS 5, having the most overhead, produced single drive speeds of 450 MB/s. 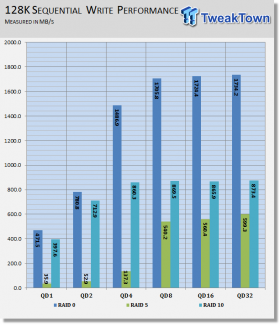 Write performance in sequential testing came in at 1734 MB/s within RAID 0 with both RAID 10 and RAID 5 reaching 873 MB/s and 599 MB/s respectively.

Storage enclosures have been around for quite some time, they are an integral part of allowing us to store large amounts of data in a compact form factor. Of course, there are many different types of enclosures ranging anywhere from single bay solutions all the way up to full racks housing 16 drives and more. With all of these types of enclosures, the limiting factors that determine the amount of performance you can achieve is often the interface that controls the uplink to the data.

Over the past few months, we have seen a plentiful amount of enclosures of which many focused on the consumer market and the USB 3.0 interface. Today, with the TS431S, we had the opportunity to expand past those limitations and see what the MiniSAS interface was capable of. As with most SilverStone products, the TS431S enjoys a great amount of build quality, the blend of SECC and aluminium construction allows for a very heavy enclosure while at the same time durability to protect your drives.

During testing, we enjoyed a great amount of performance from each of our RAID arrays and the Adaptec 78165 we used for the review. Our RAID 0 array was able to top 2000 MB/s and 118K random read IOPS, of course results will certainly vary depending on the drives and SAS controller used in tandem with the TS431S.

PRICING: You can find the Silverstone Tek 4-Bay Storage Tower for 3.5-Inch SATA/SAS HDD with miniSAS Interface (TS431S) for sale below. The prices listed are valid at the time of writing but can change at any time. Click the link to see the very latest pricing for the best deal.

The Bottom Line: SilverStone's TS431S offers a secure enclosure for connecting up to four of your SATA or SAS hard drives or SSDs. With the miniSAS interface, the TS431S is capable of great performance depending on the mix of drives and controller used.