After three Lord of the Rings features and two previously released Hobbit, we have now finally come to the last entry in the series, which also likely closes the door on Middle Earth - at least from the involvement of director Peter Jackson, who committed well over a decade of his life to their making. So now the films can be seen together in context, is the experience enhanced or degraded by The Battle of the Five Armies? 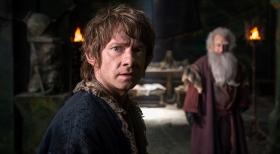 Picking up exactly where The Desolation of Smaug left off, The Battle of the Five Armies finds the dragon Smaug (voiced by Benedict Cumberbatch) on his way to attack Laketown, by the deception of Bilbo Baggins (Martin Freeman) whilst leaving the amassed fortune of gold and jewels completely unguarded.

When the various denizens of Middle Earth who hold a claim to Smaug's treasures amass at the foot of the lonely mountain, the stage is set for an epic showdown between dwarf, elf, orc, the rising threat of Sauron and the intoxicating power of the Arkenstone, which threatens to corrupt the virtue of Thorin Oakenshield (Richard Armitage). 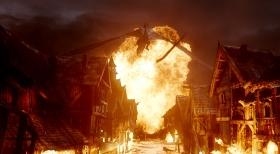 By now, most casual cinema goers will have formed their own opinion on the relative merits of the Hobbit films, including a fair share of criticism. Most are reasonably valid. My biggest complaint; rolling the story thin enough to fill three feature films from the originally planned two-parter continues to drag on the third entry, even if it does pick up the pace quite substantially. I'm certainly not blind to the appeal of wringing out another film, not least the financial benefits to Warner Bros, but it took way, way too long to get here and when it's all said and done there's the equivalent of a entire film that's basically redundant.

My other major beef with The Hobbit is that it indulged Peter Jackson's excesses far too eagerly, with comparisons to George Lucas' Star Wars prequel trilogy painfully obvious. Just because you now have the technology, the cash and the blind backing of studio brass to do whatever you want, doesn't mean you should, nor is it automatically in service of the films.

There's a beauty to imperfection, in coming up with low-tech creative solutions to problems, along with an inherent realism that all the power of WETA's render farms couldn't hope to possibly replicate. It's as if the subtle subplot of The Lord of the Rings of the power of the natural world over the forces of industrialisation has become lost on Jackson. This is why The Hobbit trilogy will always be inferior to its older brother. 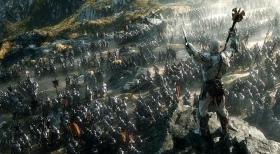 I don't want to give the impression that I hated The Battle of the Five Armies - far from it. At a comparatively snappy 144 minutes, the film is filled with plenty of action (more than the previous two films put together) and generally does a pretty solid job at tying up the loose ends neatly in a bow, including in the additional characters and subplots that Jackson bolted onto Tolkien's book. The cast are uniformly great, even if this entry does sideline Martin Freeman's fabulous take on the titular Bilbo Baggins, in favour of the Shakesperean-tragic Thorin Oakenshield.

There's some nice little cameos from bit players from The Lord of the Rings trilogy, including Cate Blanchett and Hugo Weaving who don the elf earpieces and hair extensions one last time. There's also a fan-pleasing final scene which wraps up the whole Middle Earth saga beautifully, an unequivocal proclamation that all these films are indeed meant to be watched as one whole saga. 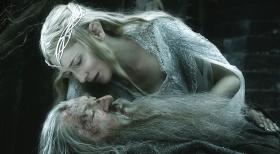 Still, the staleness and malaise in The Hobbit is undeniable, which questions whether Jackson ever truly had the heart to take on the mammoth production in the first place. Rather than the rousing finale in Return of the King (which we should remember garnered an Oscar for Best Picture) The Battle of the Five Armies limps, as if wounded across the finishing line with audiences joylessly duty bound to turn up just to make sure the thing really, truly is over. 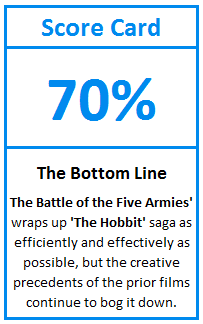