Over the two going on three years I have been here at TweakTown, we have had a few CalDigit products come through the lab. Just last month, we had the chance to look at the revamped T3 that added Thunderbolt 2 technology to the classic three bay chassis and today we take a look at yet another new release from CalDigit.

The T4 Thunderbolt 2 adds a fourth bay to the iconic CalDigit chassis along with Thunderbolt 2 support. RAID modes have been upgraded adding in RAID 5 for this solution, along with the standard RAID 0, RAID 1 and JBOD. 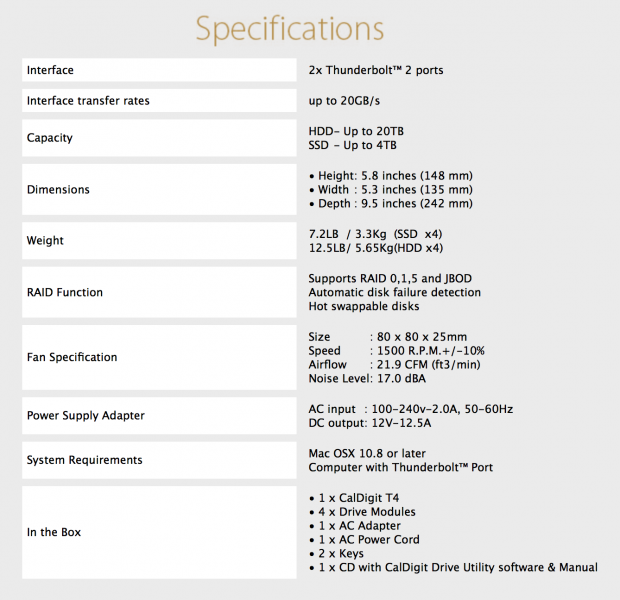 Marketing specifications for the CalDigit T4 Thunderbolt 2 have the weight of the unit coming in just over 7.2lbs with SSDs installed, while HDDs increase the weight by nearly five pounds up to 12.5lbs. RAID mode support includes RAID 0, 1, 5 and JBOD with hot swappable drives. Cooling the enclosure, we have an 80mm fan operating at 1500 RPM pushing 21.9CFM at 17dba. Compatibility of the T4 Thunderbolt 2 extends to OS X 10.8+. 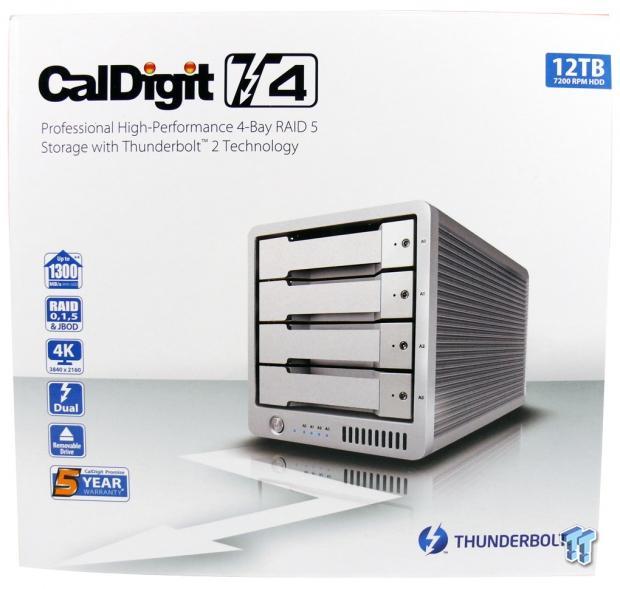 Packaging for the T4 carries an image of the enclosure on the front. To the left, we have marketing information with capacity listed at the top right. 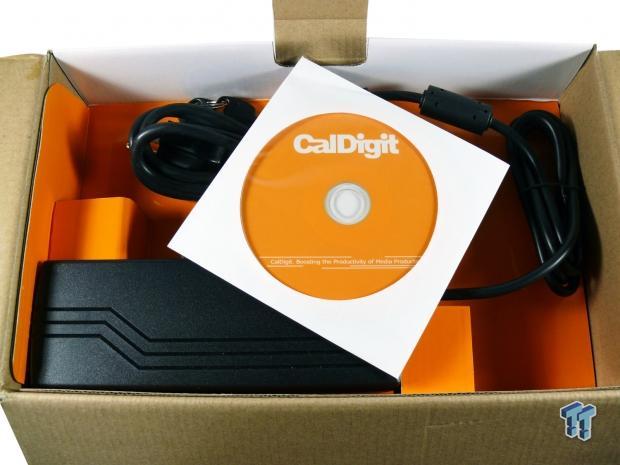 Opening the packaging, we found the accessories tucked away. 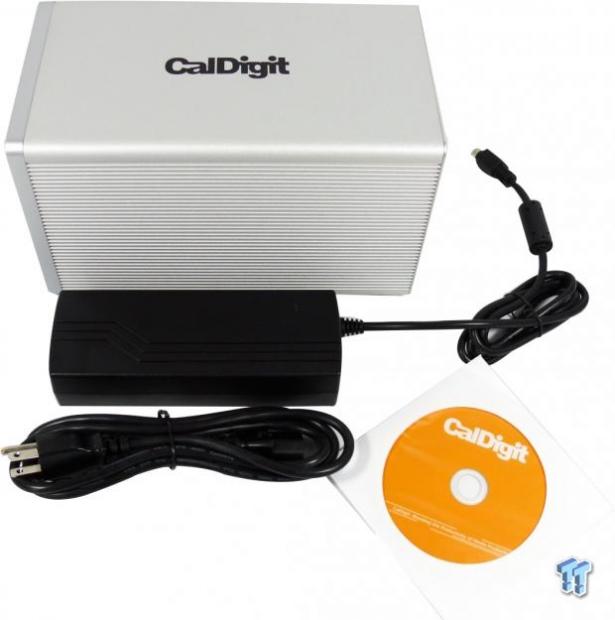 Scope of delivery for the T4 is quite simple. Here we have the enclosure, power adapter, and software disk. 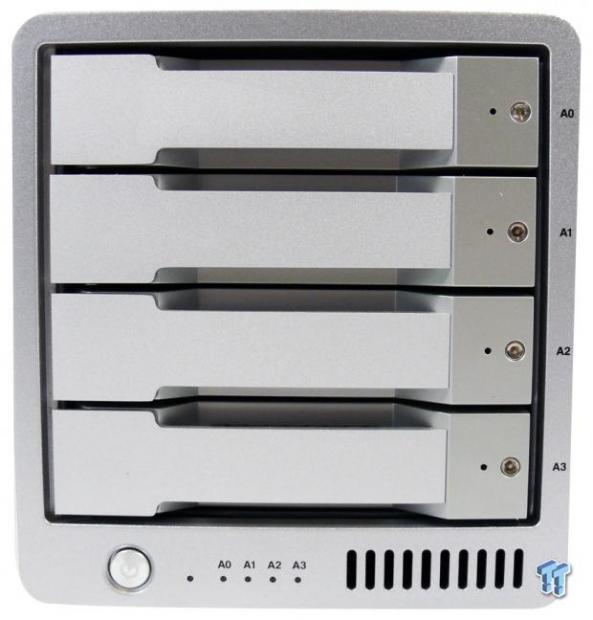 The front of the T4 is quite similar to the original T3. Here we have a full aluminum enclosure with aluminum drive trays, though this time around we have four bays. At the bottom, we have the power button, accompanied by five LEDs denoting disk activity and power. 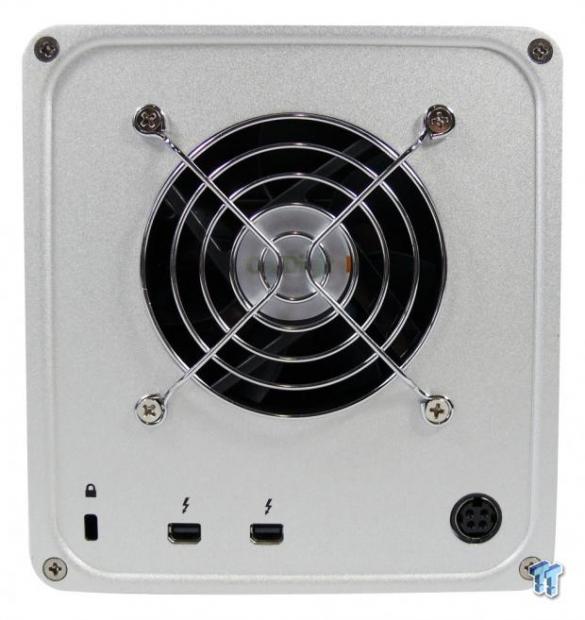 The back of the T4 houses dual Thunderbolt 2 ports with the cooling fan above and power input to the right. 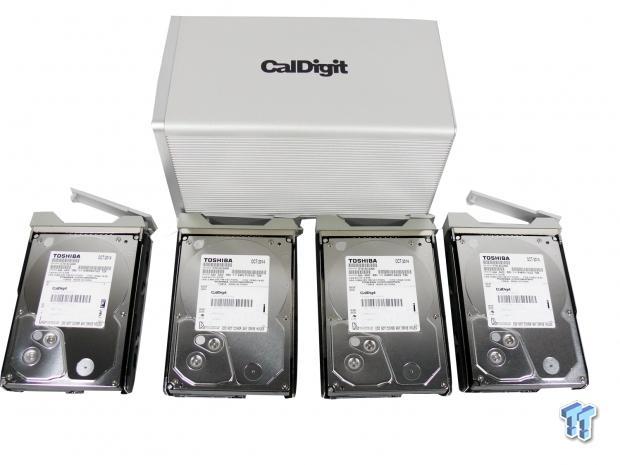 Here we have the 3TB HDDs included with our sample. These are Toshiba DT01ACA300 drives.

In testing the performance of Thunderbolt storage solutions, we utilize the Apple MacBook Pro Retina Late 2013 model, which as of this article is running OS X 10.9.1. Full system specifications are available above. To create RAID volumes in OS X I use Apple Disk Utility with 64K stripe size. In addition to this, we use a Windows test system seen above for Thunderbolt appliances that support. Benchmarks used in Windows include IOMeter 1.1; all volumes use a 128K-stripe size and are tested without a file system. 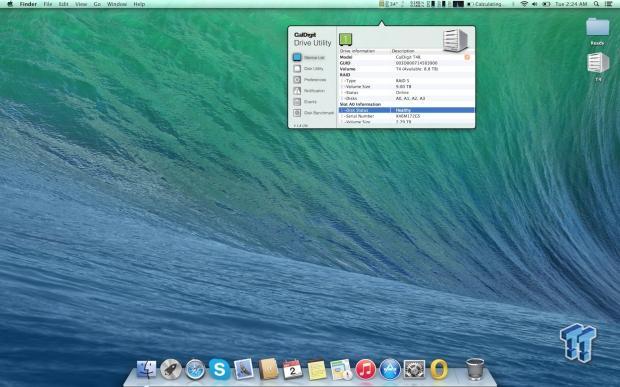 The CalDigit T4 allows you to control enclosure operations with its very own Drive Utility. From this software, you can control everything from RAID modes to preferences and even benchmark. 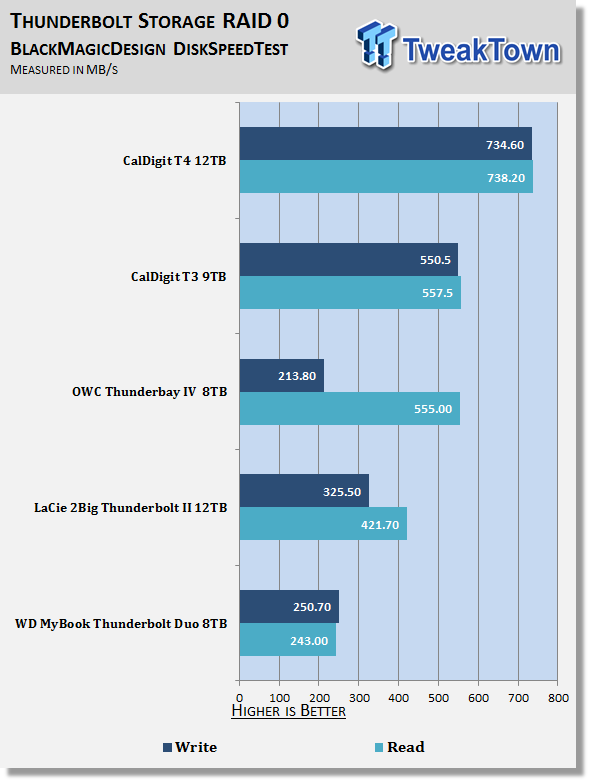 In our first test, we have all solutions in RAID 0. Of course, some of the units here aren't directly comparable, as they don't share the same amount of drive bays as the T4. At any rate, the CalDigit T4 was able to produce 738 MB/s read and 734 MB/s write. 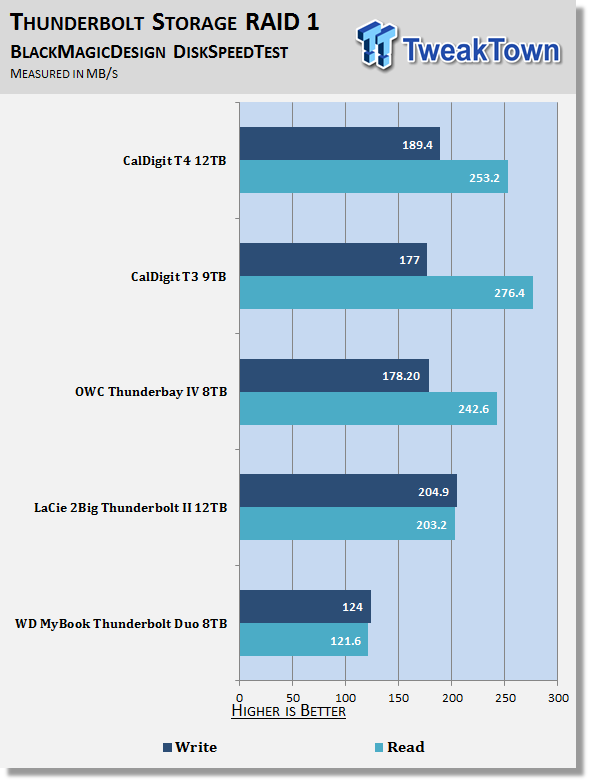 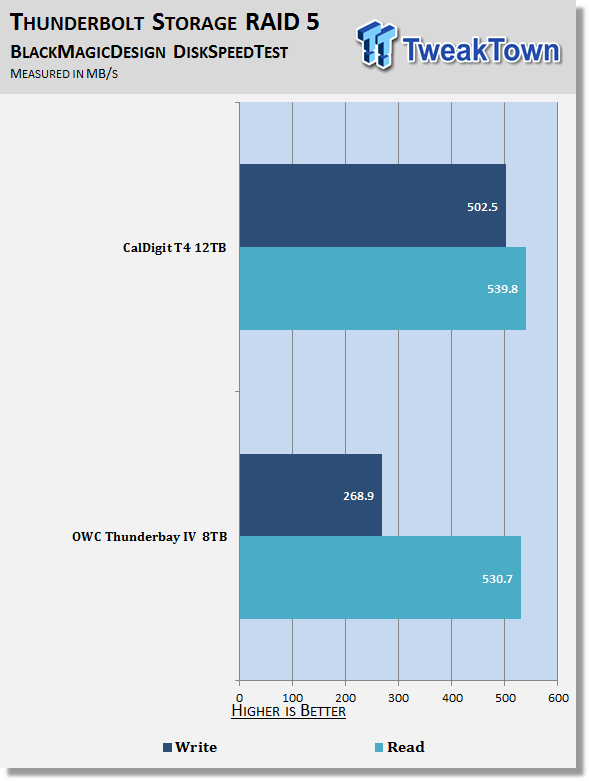 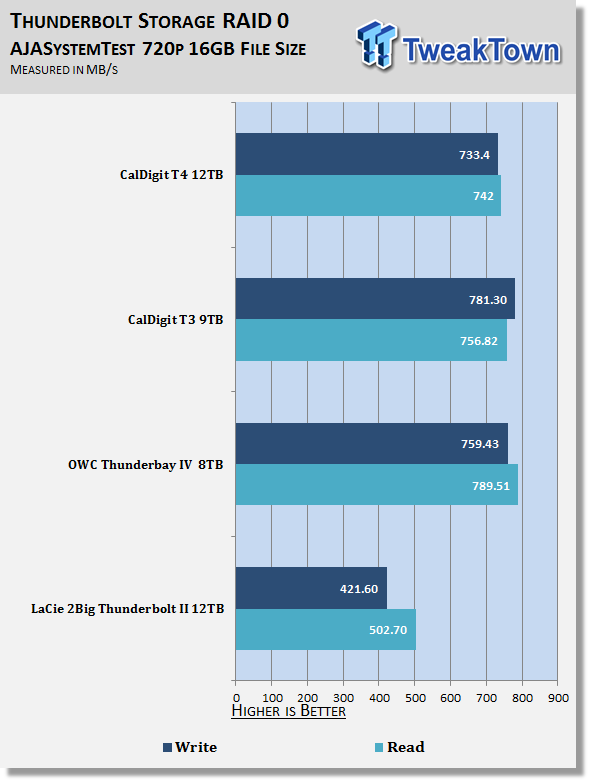 In our 720p RAID 0 testing, the T4 did quite well matching what we found with both the T3 and Thunderbay IV from OWC. Results came in at 742 MB/s read and 733 MB/s write. 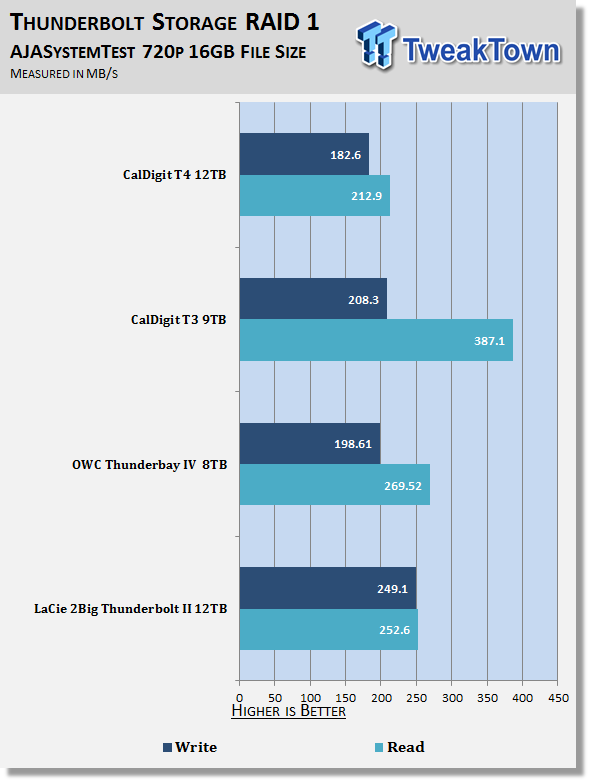 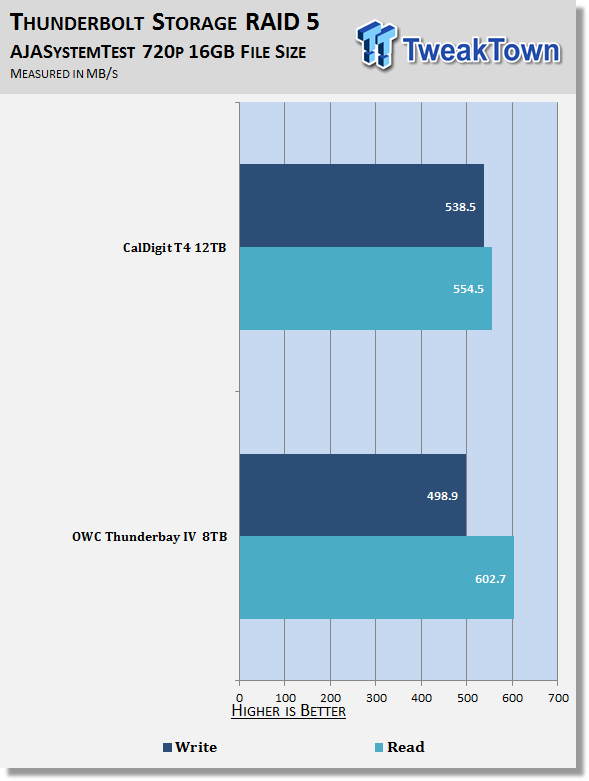 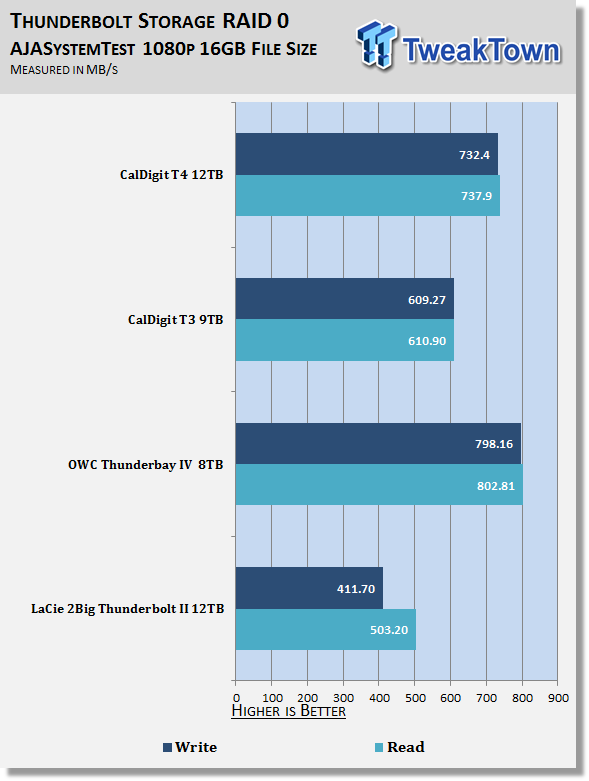 Switching our workload over to 1080p, we start with RAID 0 results where the CalDigit T4 managed 737 MB/s read and 732 MB/s write. 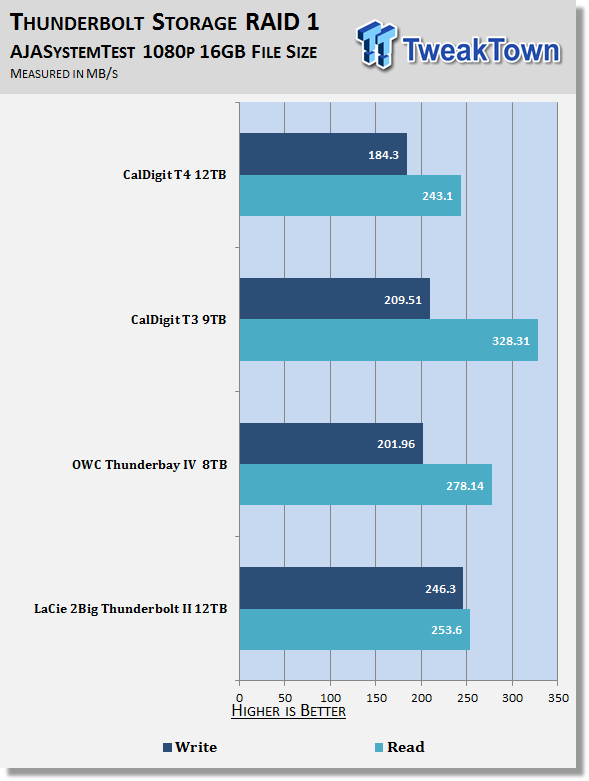 Swapping over to RAID 1, we found performance touching 243 MB/s read and 184 MB/s write. 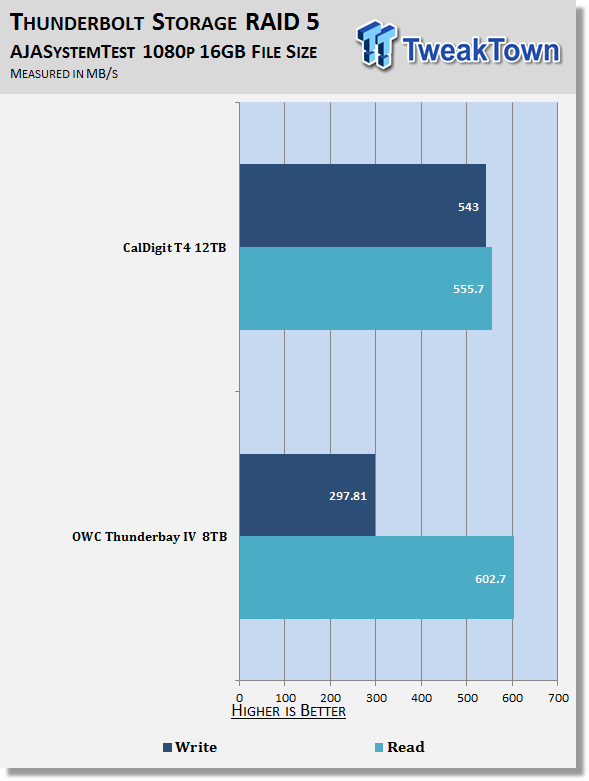 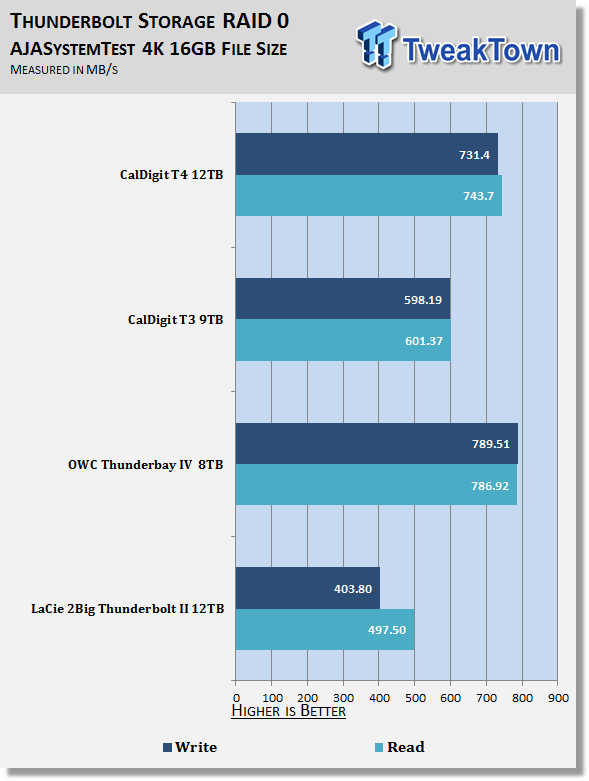 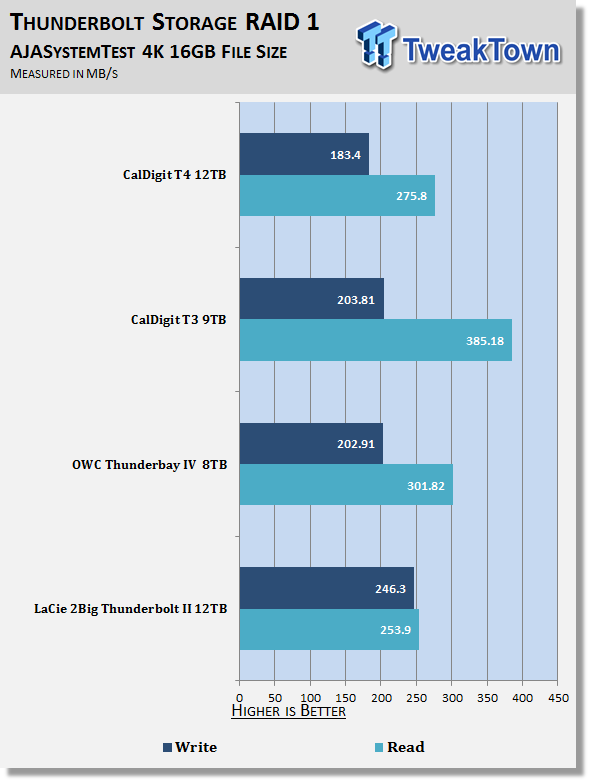 4K and RAID 1 produced 275 MB/s read with 183 MB/s write right with other enclosures in our charts. 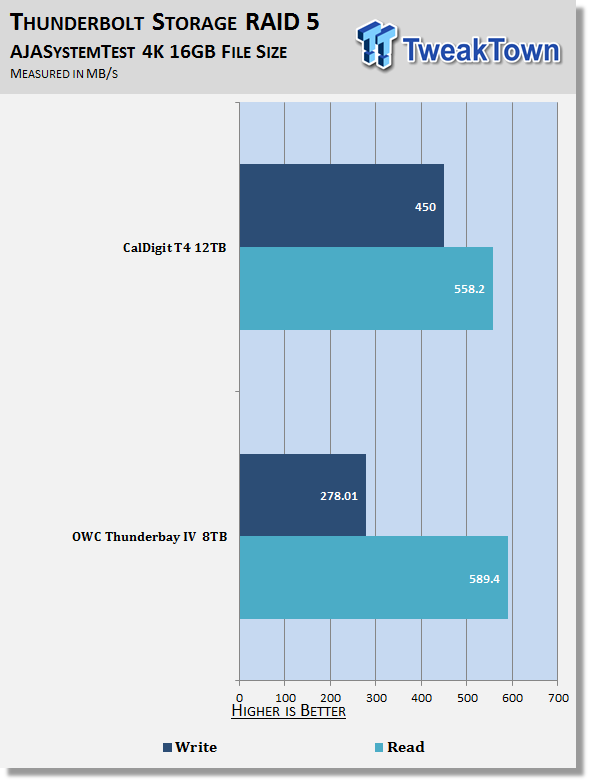 In our 4K testing with RAID 5, the T4 performed quite well with results right with the OWC Thunderbay IV. Here we had 558 MB/s read and 450 MB/s write. 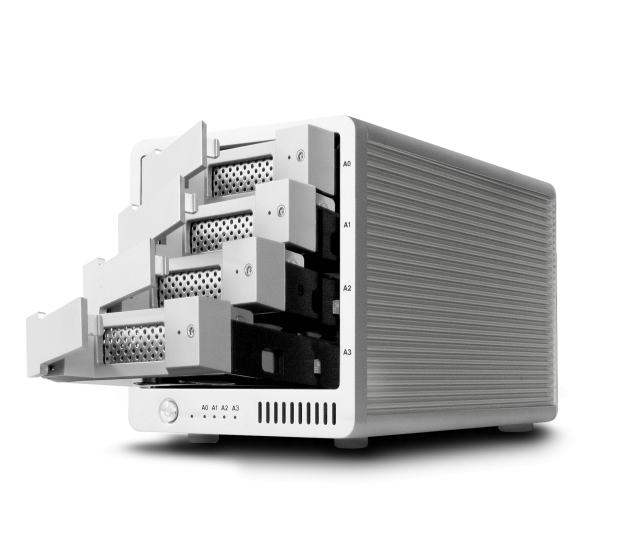 The T4 is a welcomed addition to the storage lineup from CalDigit. Adding a fourth bay to the enclosure has enabled CalDigit to produce a RAID 5 solution for those that want data redundancy without sacrificing performance. Build quality of the T4 was top notch with the all aluminum design, while the fan in the unit was quiet, while maintaining internal temperatures.

The Bottom Line: CalDigit's T4 is a great solution for those wanting high performance storage with data redundancy. With the initial cost being quite high, this may steer some away, but this unit does have a class leading five-year warranty as well.