When it comes to USB flash drives, Kingston has enjoyed a successful run with their DataTraveler series. So we were certainly excited when at CES 2013 they announced a new drive fittingly named the HyperX Predator. Kingston has also enjoyed great success with the HyperX name, most recently with the HyperX Beast RAM kit that our own Shane Baxtor had the chance to review recently.

Based upon the previous DataTraveler Ultimate G3 design, the HyperX Predator packs a monstrous capacity of 512GB with a 1TB follow up in the works. As far as compatibility is concerned Kingston has insured that Windows XP, Vista, 7 and 8 support along with Mac OS X 10.5+ and even Linux Kernel 2.6+ will work without issue. 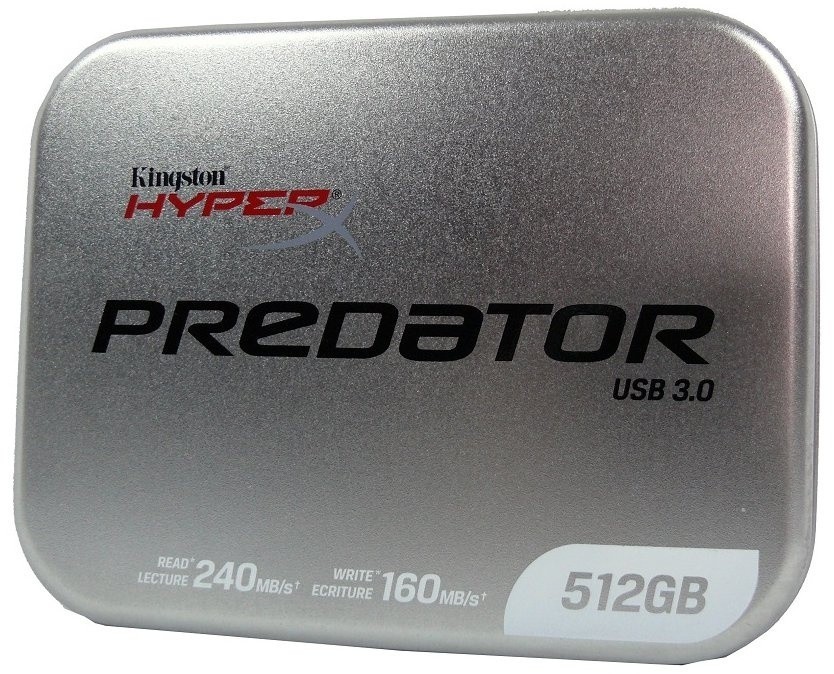 Being that this was our first USB 3.0 flash drive to actually have real packaging other than the standard bubble type, I thought it would be nice to show it off. As you can see the HyperX Predator is packaged in a rather large tin and what we found inside was rather shocking. 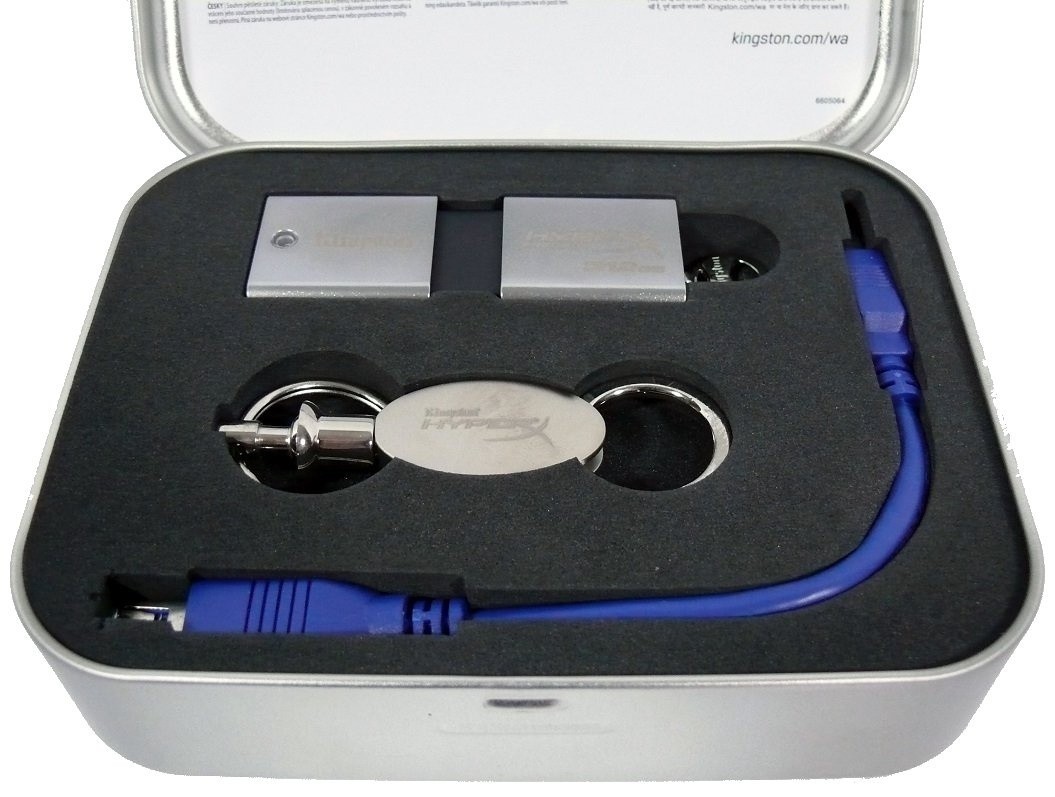 Opening up the tin we found the HyperX Predator secured in a dense foam surrounded by a full complement of accessories. It appears Kingston had the forethought to know there drive would block adjacent ports when in use and have included an extension cable appropriately colored blue. As an additional bonus Kingston has packed in a valet keychain.

At first glance you will most notably recognize the size of the Predator. At 512GB Kingston had to pull off some tricks as you will see later, to pack in all that NAND. However large, the Predator does have a rather elegant appeal, mostly due to the aluminium shell that protects the drive. 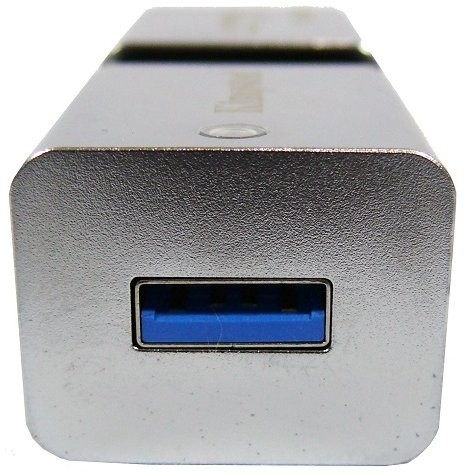 The Kingston HyperX Predator sports a USB 3.0 connection colored blue, it does however maintain compatibility with the older USB 2.0 standard.

The HyperX Predator if you haven't yet noticed uses a cap-less design, much like the RageXT from Patriot, the Predator uses a slide system. This system eliminates first losing your cap and secondly the wearing out of the latch. Two birds, one stone. 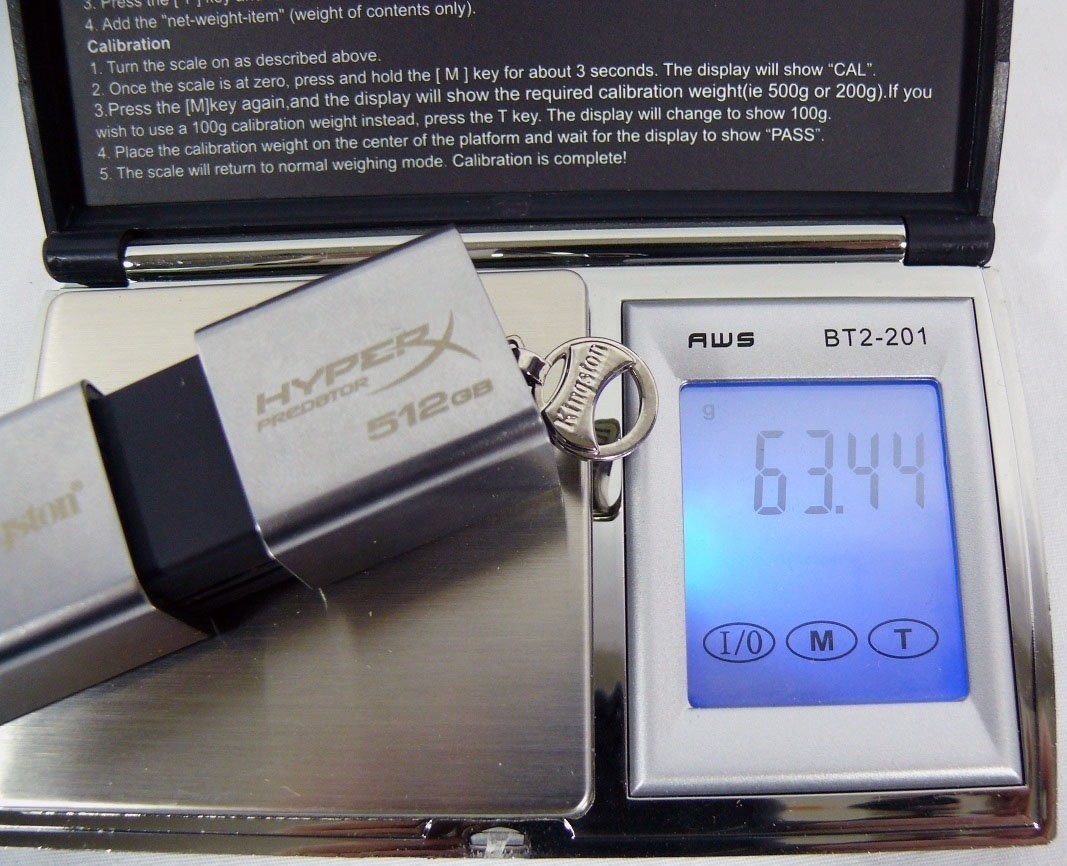 When I first picked up the HyperX Predator I noticed that it did carry a bit of weight. So rather fittingly I decided to drop it on my scale and see just how much, as you can see the drive weighed in at 63.4 grams. 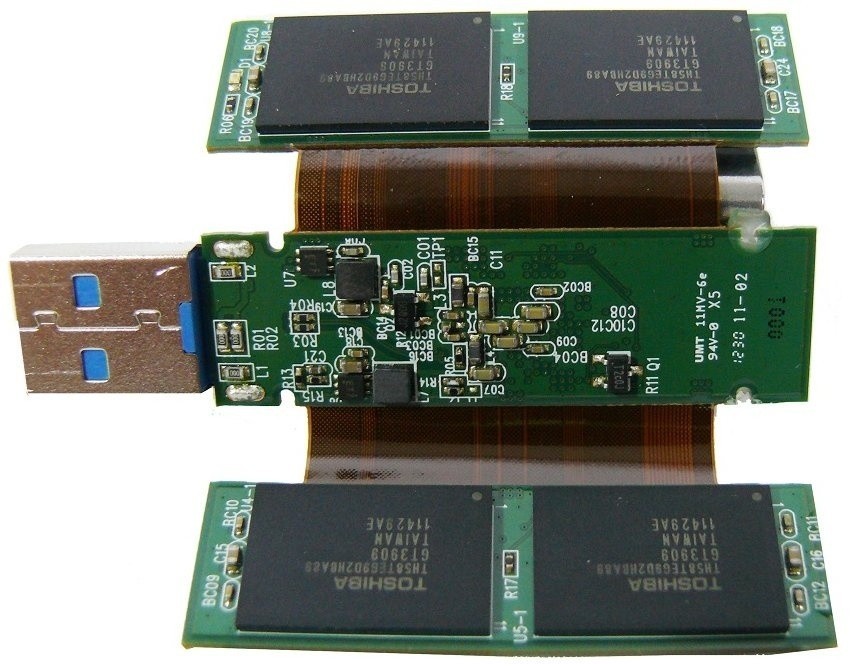 Pulling apart flash drives is never an easy task especially with all the unique designs that manufacturers employ. The Kingston HyperX Predator was one of the most difficult as the plastic casing that houses the PCB is glued together. However, after a bit of finagling, the drive came apart, and we can take a look at the internals and choice of materials. The first thing we noticed was the main PCB houses nothing but the controller, as you will see shortly. All eight NAND packages are outsourced to their own PCB. 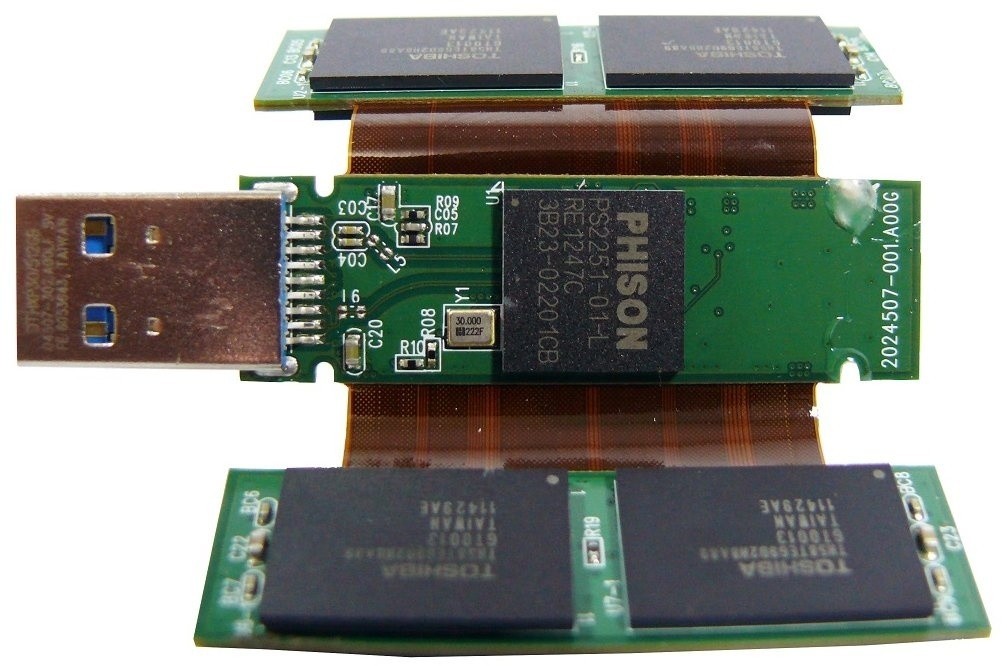 The HyperX Predator utilizes a 64X8 NAND configuration all of which are labelled Toshiba TH58TEG9D2HBA89, which is 19nm Toggle MLC. 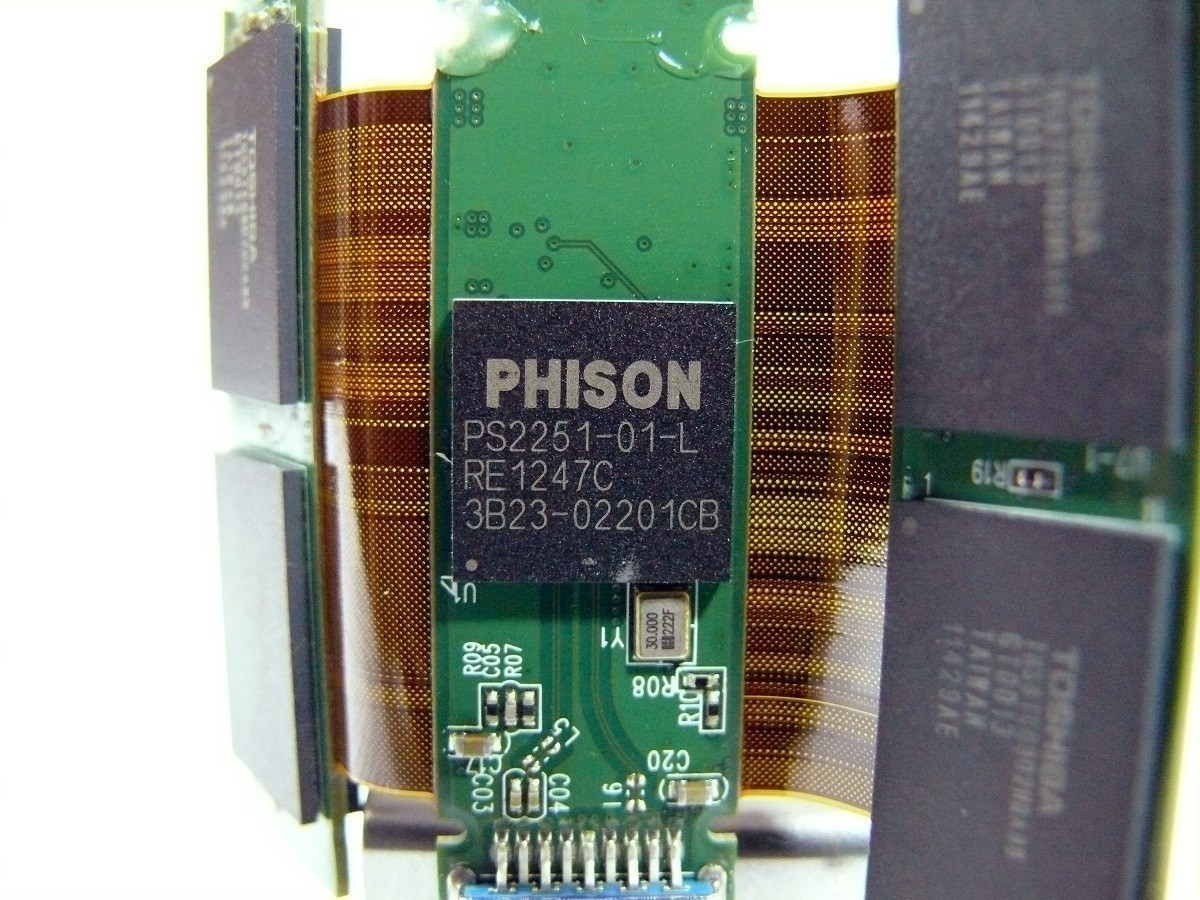 Taking a closer look at the controller, those of you that had the chance to read my Supersonic Magnum review, will notice Kingston too chose the 8-Channel Phison PS2251.

One of the lesser known features of running Microsoft's new operating system Windows 8 is the native capability of USB Attached SCSI or UASP. To start my benchmarking procedure I secure erased the HyperX Predator, as I do all drives I test. 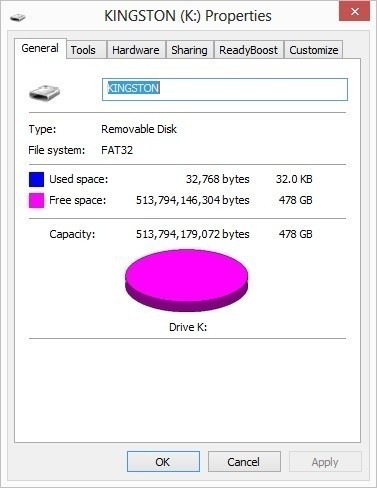 Before we get into the benchmarking procedure I thought it may be nice to show the formatted capacity of the Predator. As you can see above the drive comes formatted in the FAT32 file system and gives access to 478GB of usable storage. 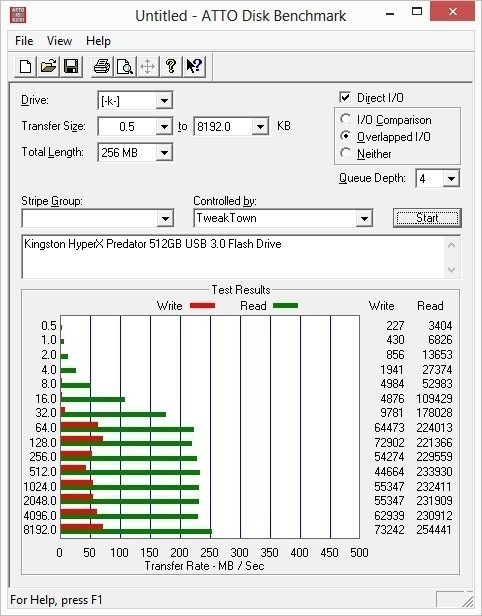 ATTO results were a bit perplexing to say the least. I was expecting at least marketing numbers to be achieved, but received 254MB/s read and 73MB/s write, where marketing dictated 240MB/s read and 160MB/s write, alas let's move on and see how the drive did in CDM. 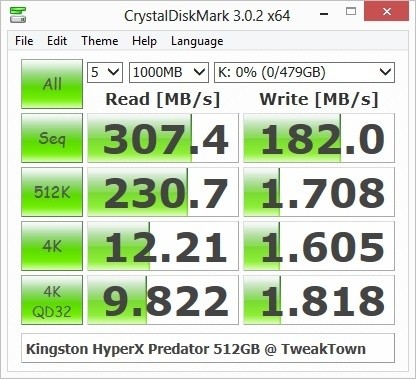 The HyperX Predator began to shine during CDM testing. We managed an impressive 307MB/s read in sequential testing followed up by an impressive 230MB/s during the 512K random read testing. We also found the 4K and QD32 results to be great, and as a matter of fact, this is the quickest drive we have tested when it comes to NCQ. 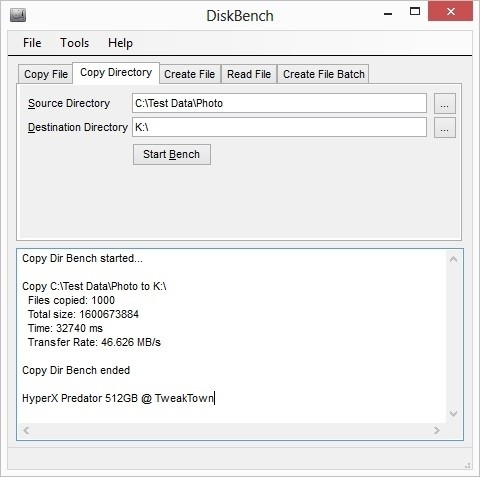 DiskBench showed the HyperX Predator was rather quick in real-world testing. We were able to achieve 46MB/s transferring our batch of photos in 32 seconds. 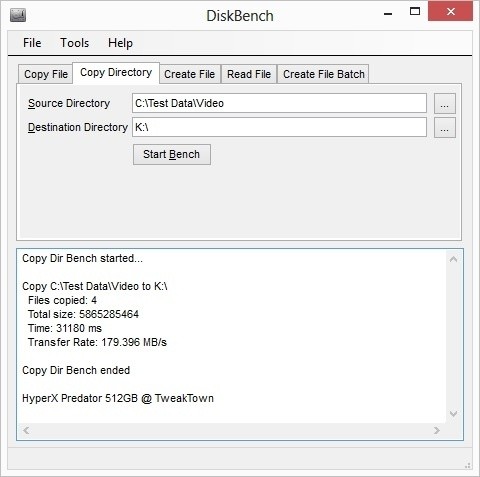 Again impressive the Predator was able to achieve 179MB/s transferring our videos in just 31 seconds. 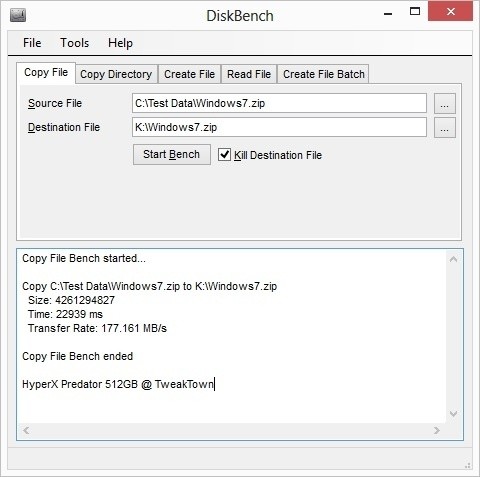 Transferring our Windows 7 install the HyperX Predator was capable of 177MB/s with a runtime of 23 seconds. 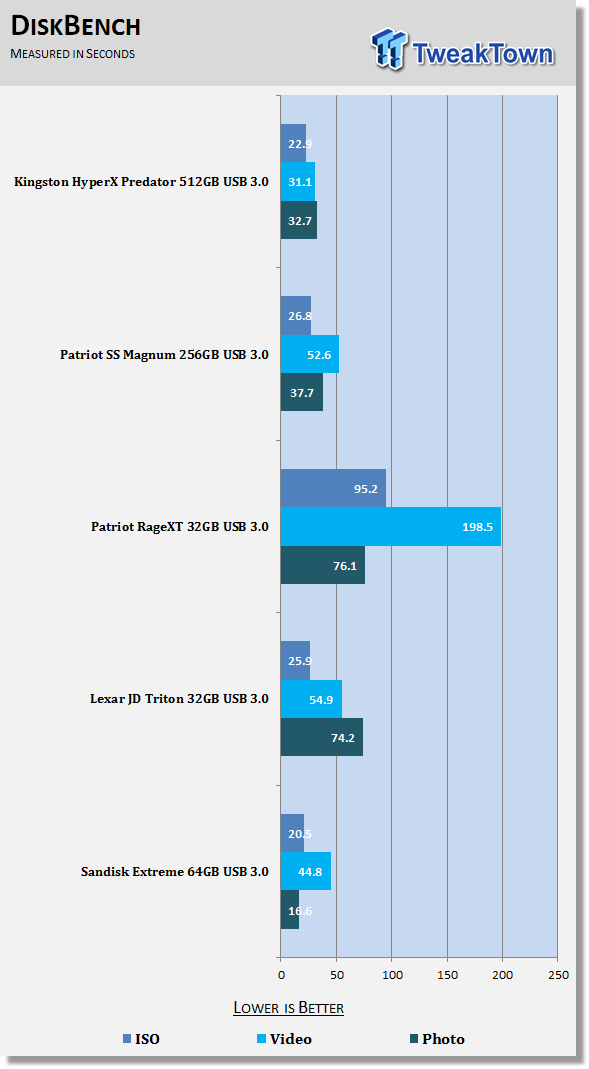 Having tested my fair share of flash drives over the past few months, I can certainly say the HyperX Predator is one that I will remember for years to come. For one it breaks down barriers with its insane capacity, and to think Kingston is preparing to launch a larger 1TB model.

As far the aesthetics of the drive, Kingston has done a great job designing the HyperX Predator, modelling it after its successful Ultimate G3 flash drive. Taking into account that this flash drive would block adjacent ports when in use, it was a great addition to see Kingston include the extension cable. Additionally, as most of you know, losing the cap to your flash drive is not a very gratifying experience, thus Kingston designed the HyperX Predator as a cap-less flash drive - and even more what I call generation two where the back of the drive slides forward to reveal the USB 3.0 port.

Performance of the drive was exceptional, especially in Crystal Disk Mark where we saw the Predator reach 307MB/s in sequential testing. DiskBench also gave props to the Predator as we saw some of the best numbers ever reached, and looking at our chart above, you can see the Kingston drive is near the top in all tests.

As far as pricing goes I was able to gather some numbers for that as well and you may want to take a seat before reading on. For the 512GB model we tested here today you're looking at $799.99. However expensive that may be, the Kingston HyperX Predator is the quickest drive we have tested and at the same time also has the largest capacity on the market - the best of both worlds in one flash drive. 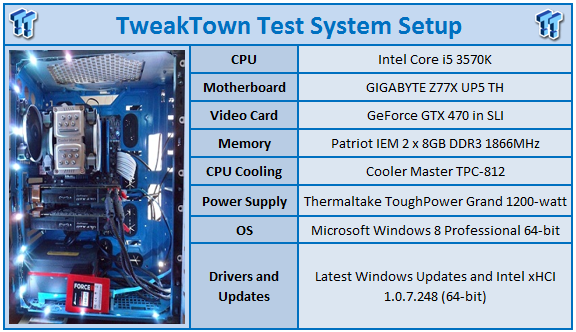