For years Icy Dock has pumped out several successful products designed to make your storage subsystem easier to manage. One of the oldest form factors for PCs is the 5.25" bay, commonly referred to as an optical bay since CD, DVD and now Blu-Ray drives fit into the 5.25" space.

In the ever evolving digital world, plastic disks are slowly being pushed aside and digital downloads are gaining preferred status. In this new downloadable digital world, you need storage and a lot of it. 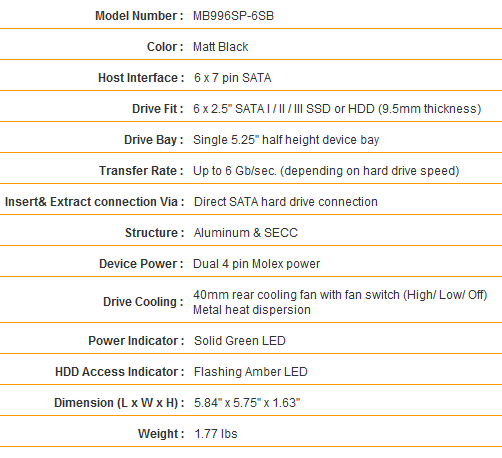 Icy Dock's MB996SP-6SB is a 6-bay 5.25" 6-in-1 storage accessory that pushes the limits of drive density while actively working to cool your drives.

At the time of writing Newegg had a MB996SP-6SB product page, but didn't have stock. Google Shopping did turn up a handful of e-tailers with units on hand with prices ranging from $93 to $108. 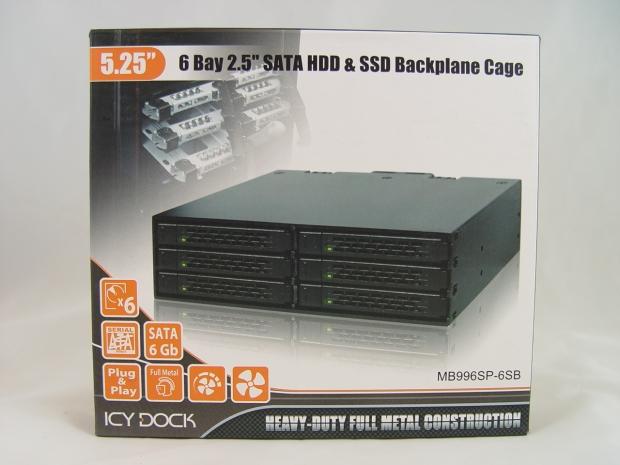 We're just going to breeze though the box images since there aren't many retail stores that carry the MB996SP-6SB. 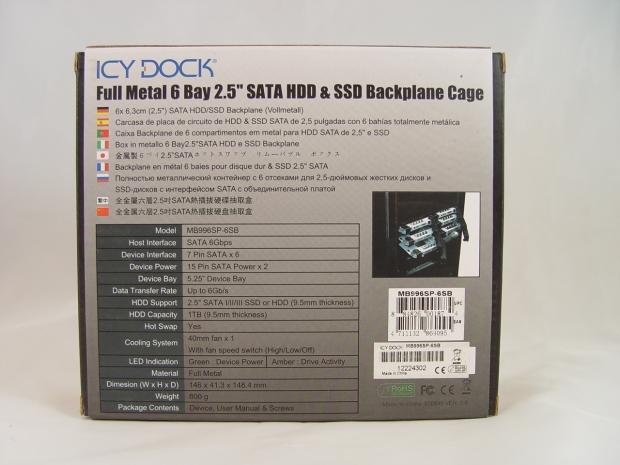 Icy Dock did put together a nice retail package for the unit. 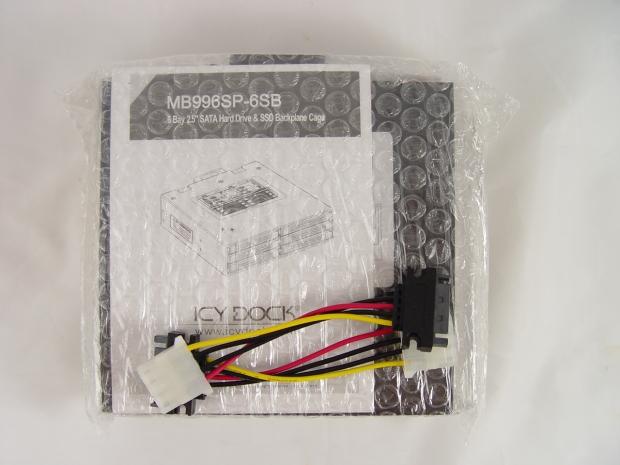 The inner packaging was put together well and the metal cage has a little wiggle room inside the box. Also, note the custom SATA power to 4-pin Molex cables included in the package. 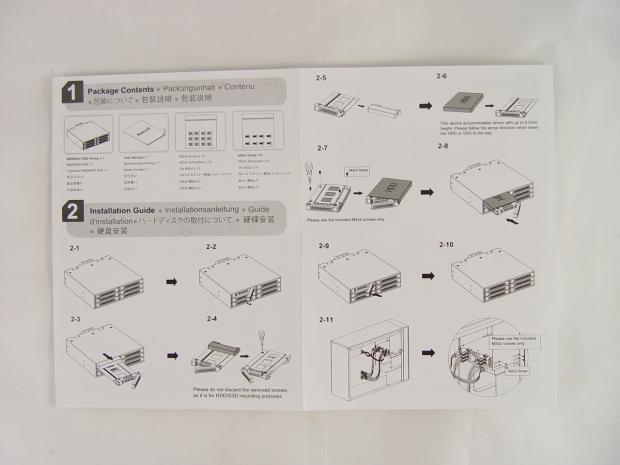 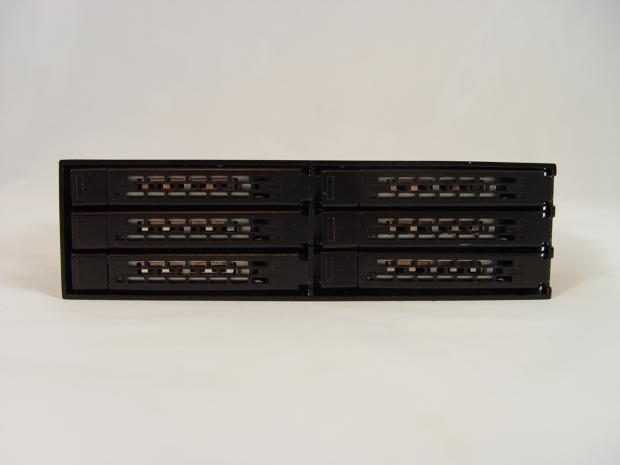 Here we get our first look at the 6-in-1 cage. From this side it all looks pretty simple, six 2.5" drives in a single 5.25" bay. Although difficult to see here, each drive bay had a light system that shows when a drive is present, is active or with the absence of light you know a drive isn't installed into the bay. 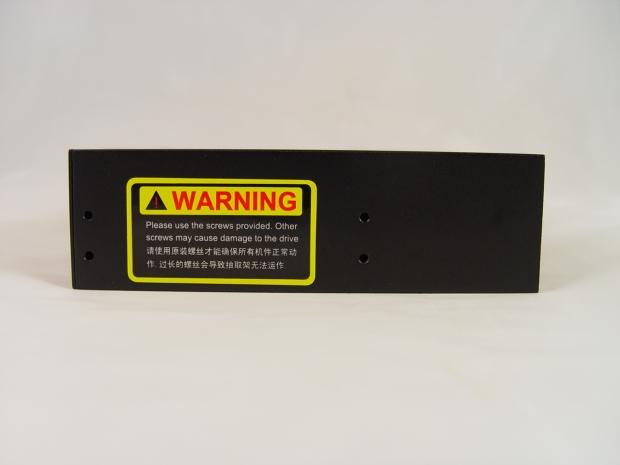 Standard 5.25" mounting points are located on each side. The sticker says to only use the screws included with the kit - we'll cover that part a little further in the review. 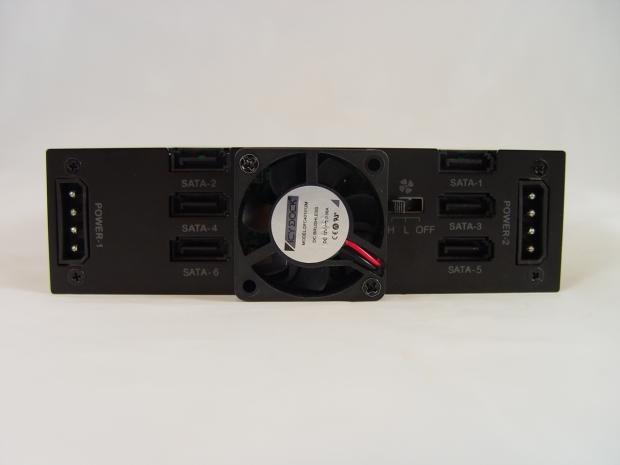 The system isn't as plain as you once thought after seeing the back. Each bank of three drives shares a power plug. Icy Dock includes two SATA power to 4-pin Molex connectors in the package. Each HDD bay has its own SATA data connector and we found there isn't any signal interference that reduces performance in the backplane.

There is a 40mm fan right in the middle to cool your SSDs/HDDs. Everyone has the same opinion of 40mm fans, they're loud. Amazingly, that isn't the case this time. 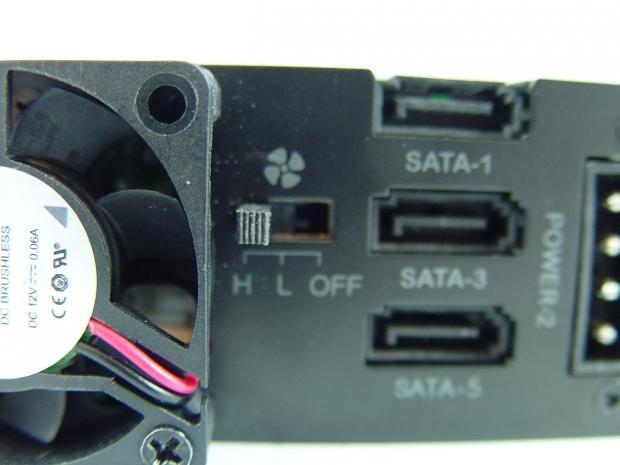 The 40mm fan installed in the Icy Dock MB996SP-6SB isn't loud at all, even when switched into the high speed mode. The switch has three positions, High, Low and Off. I tested the system in all three modes and even with the fan on high we couldn't hear it from a couple of feet away. 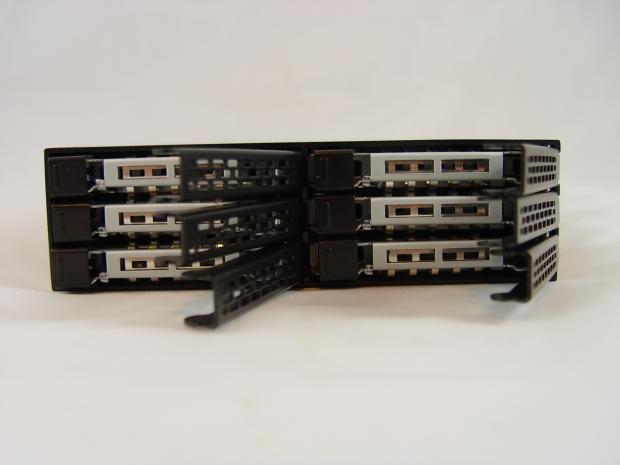 The drive bays do not lock, but the latch system is very good, so if you're using the MB996SP-6SB in a LAN party system that's transported often you don't have to worry about your drives falling out. 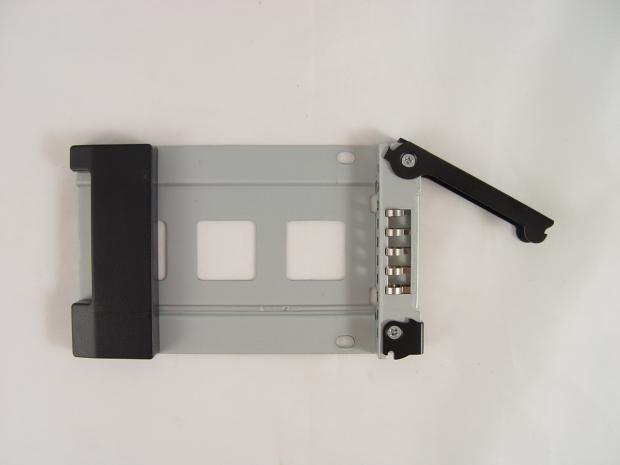 The drive sleds are designed well. The black cap at the back of the sled gets removed when you install a drive. The five silver tabs at the front of the sled reduce vibration and ground the sled.

We have three Icy Dock MB996SP-6SB backplane systems here now for our dual Xeon NAS load system. While Intel tracks down the Xeon processors for us, we went ahead and build two systems to run our new advanced NAS load program.

Each system is a model for high density computing, running 12 Hyper-V installs of Windows 7 in a 4U Antec Take-4. The Antec Take-4 case is perfect model for showing off the MB996SP-6SB because it first hit the market before the 2.5" form factor entered the enterprise or power user market. There isn't a single 2.5" bay in the case. 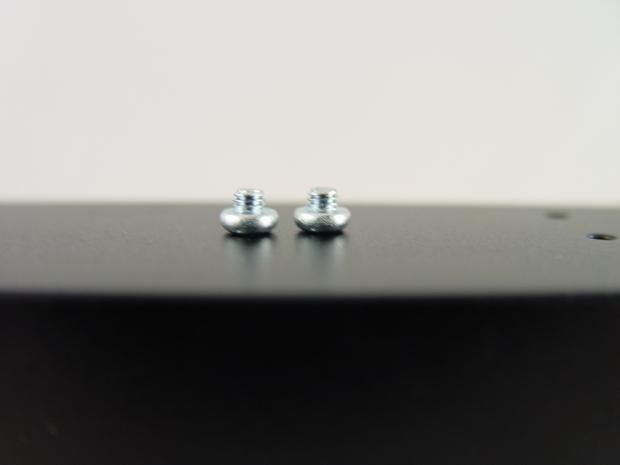 Getting back to business, remember the warning sticker that says only use the supplied screws with the MB996SP-6SB? Here we see the screws, they are very small, but if your case is made out of paper you won't have a problem getting a thread and a half from the screw into the MB996SP-6SB. 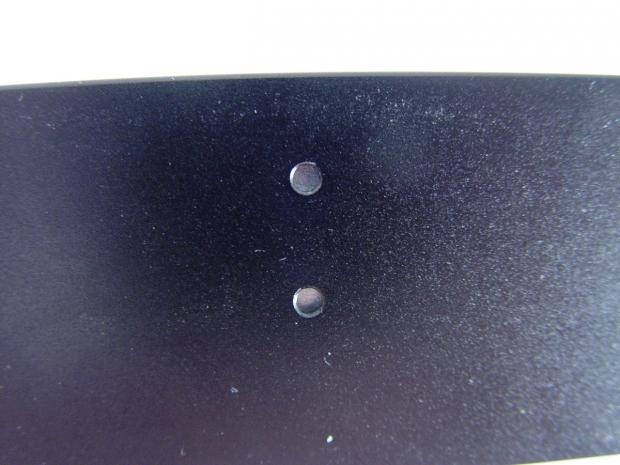 Let's do the math real quick. You have two 2.5" drives going into a 5.25" space. That leaves around a quarter of an inch available, but you also have a few buffers tossed in the mix as well, like the sides of the MB996SP-6SB and the sides of the drive sled. That doesn't leave a lot of room for things like screws.

In the image above we see the silver Corsair Performance III drives through the mounting holes. The drives are right next to the side of the case and because of this you can't use long screws in the holes towards the front of the drive cage. 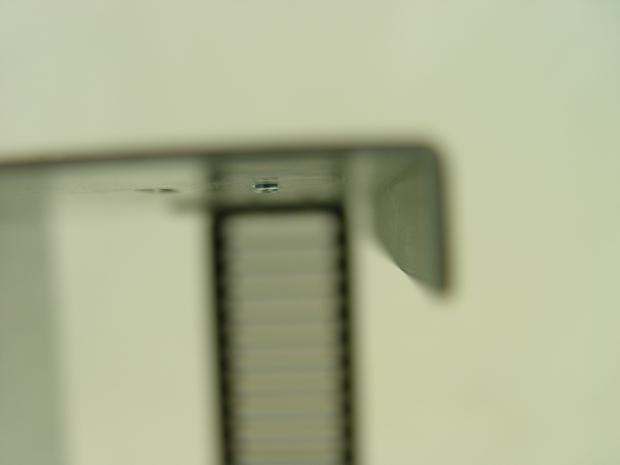 Here we see the micro screw sticking out of the 5.25" cage. I'd say the Antec Take-4's metal is about average in thickness for a case. You get about half to three quarter of a thread to secure your cage in the case. 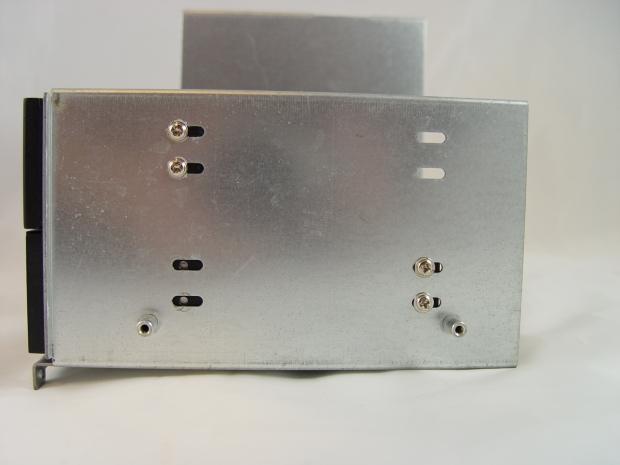 I wasn't able to get the supplied screws to bite into the MB996SP-6SB so I just used regular fine thread screws in the back four (two on each side) mounting points. I couldn't use the same length screws in the front mounting points because they hit the SSDs. I would have liked to see Icy Dock ship screws that were about 2mm longer than the current screws that ship with the system.

I also tried the screws in a few other cases and none of my test systems that used screws would work with the supplied hardware. My screwless systems worked fine though. 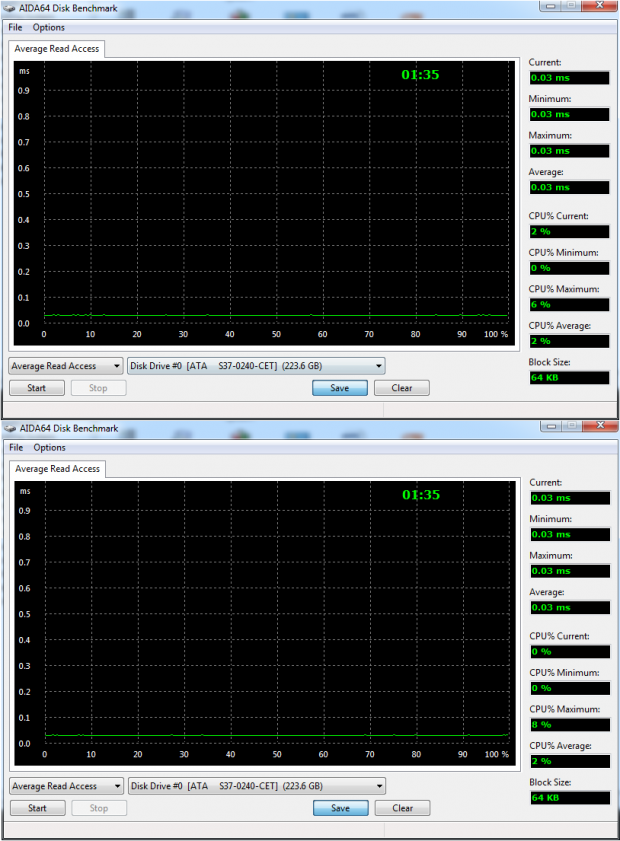 Before we sign off on the Icy Dock MB996SP-6SB we need to verify its use doesn't impede the performance of our very fast SSD.

In the test above we used AIDA64 to measure read latency of a Monster Digital Daytona 240GB SSD. The top result was taken with the drive directly attached to the test system and the result below was with the Icy Dock MB996SP-6SB in the signal path. Both tests gave us a .03ms response time. If the MB996SP-6SB were to interfere with performance we would have seen it in this test. 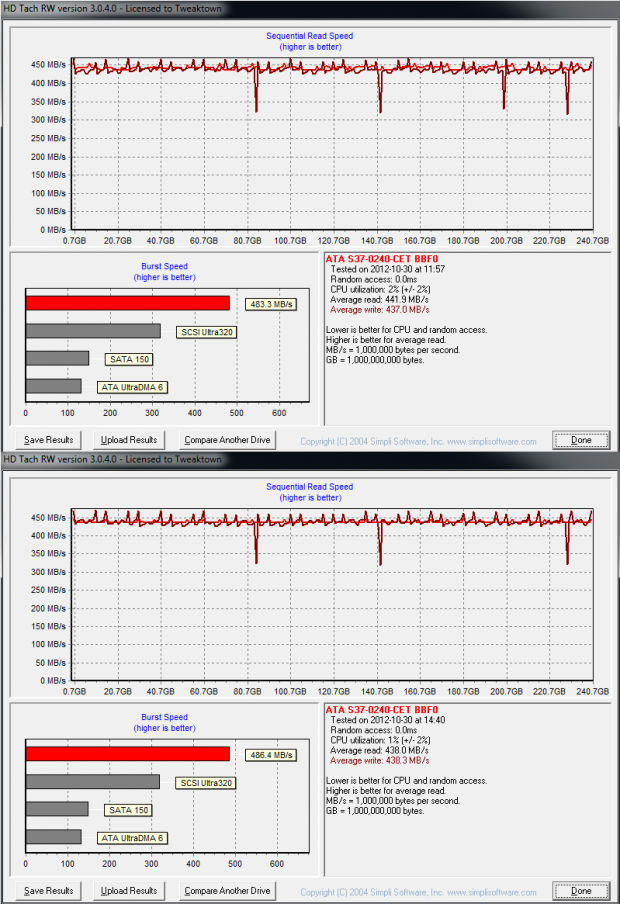 Just to be sure we passed the same drive through a sequential read and write test. The results are nearly identical and the Icy Dock MB996SP-6SB didn't interfere with performance.

Icy Dock's MB996SP-6SB is a fairly unique product that gives storage enthusiasts the ability to use a large number of 2.5" storage products in places they weren't designed for.

I have a number of very nice computer cases, like the Lian-Li V2000, Cooler Master Stacker Series and Cosmos units that were never designed for 2.5" drives, but that doesn't mean I want to discard them. The MB996SP-6SB allows you to extend the life of classic products.

My classic cases weren't the reason I sought the MB996SP-6SB SATA III cages, though. We have a genuine need to place several 2.5" drives in a small package. In our case the MB996SP-6SB allows us to increase the density of our servers.

We would normally have to tape SSDs to drive sleds designed for the 3.5" form factor. This would of increased heat and ultimately reduced reliability. The last thing I want to do is configure another 24 virtual servers and two real servers to hold them all. 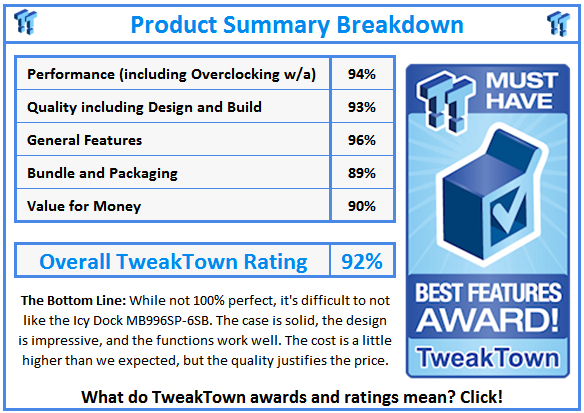 We noticed the review was posted early last week, overall is great! One thing to talk about is the issue with the screw's length. We went ahead and inquired further about this, and we have the updated revision for the case screws, which are at 2.5mm length. Any further would cause issues with the ejection mechanic. So, our new units in production have these screws, and should resolve the issue with mounting.