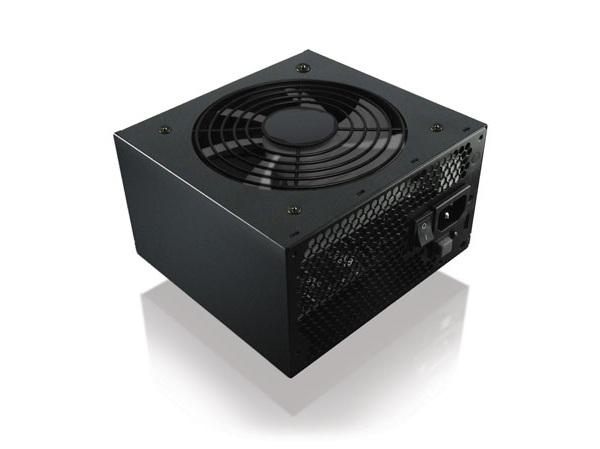 This time around we have another power supply from Mushkin ready to go through our load tests. Last month we took a look at the Mushkin Enhanced Joule 800W power supply. Now we have the Joule 700W on the bench for testing. Being that the unit is from the same series and manufacturer, you would expect almost identical builds and results.

Right off the delivery truck we could tell a big difference in design between the 700W and 800W models. It was quite apparent that the Joule 700W didn't have nearly as extensive cooling on the inside. We also noticed that while the 800W model holds an 80Plus Silver rating, the smaller 700W model only manages to hold an 80Plus Bronze rating.

There are quite a bit of differences going on between the two units, so let's get into some specifications and see if we can start picking apart why the Joule 700W differs so much from its big brother.

The I/O specifications of the Joule 700W show little difference between it and the Joule 800W. It still has 26A minor rails with a combined total output of 150W and the -12V and 5VSB rails remain unchanged as well. The only difference in output is that the dual 12V rails are slightly weaker, pushing only 26A each with a combined maximum output of 51A. 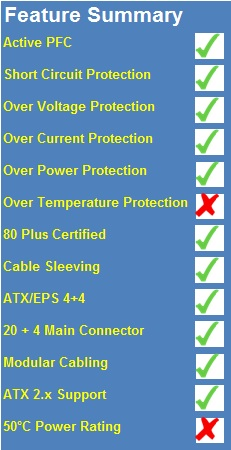 Features between the two Joule power supplies are almost identical. There is almost a full complement of protections with the Joule 700W, with Over Temperature Protection being the only one that is lacking. The power supply is still 80Plus certified, but drops down to a Bronze rating for efficiency. All of the cables are fully sleeved and the 700W Joule gains modular cabling to give it a slight edge over the 800W Joule power supply. Unfortunately the unit still lacks the 100% output at 50C rating. 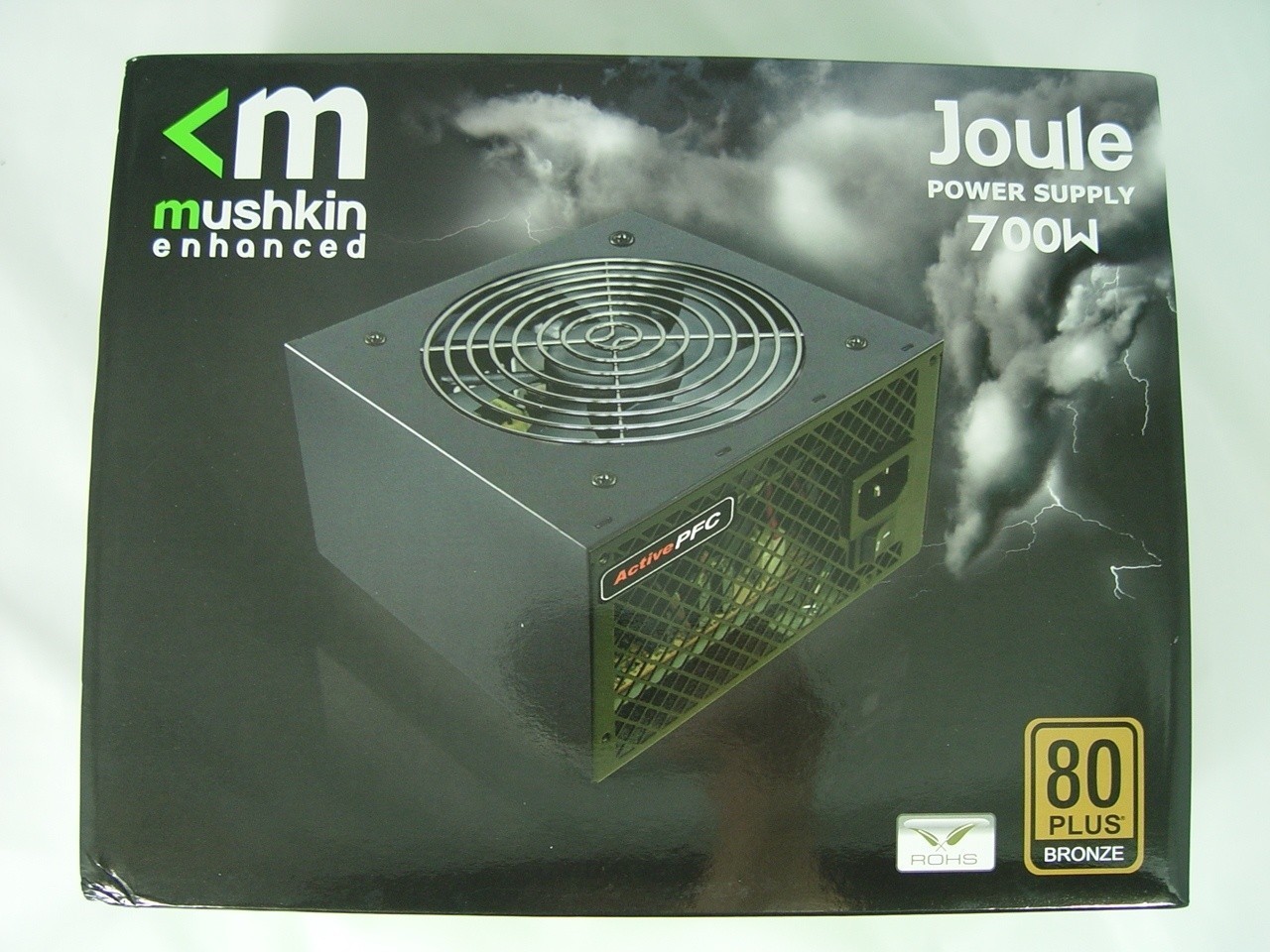 Packaging remains the same for the Joule 700W. If it wasn't for the change in the 80Plus logo to Bronze and the notation of 700W, you wouldn't even know the power supply was different. 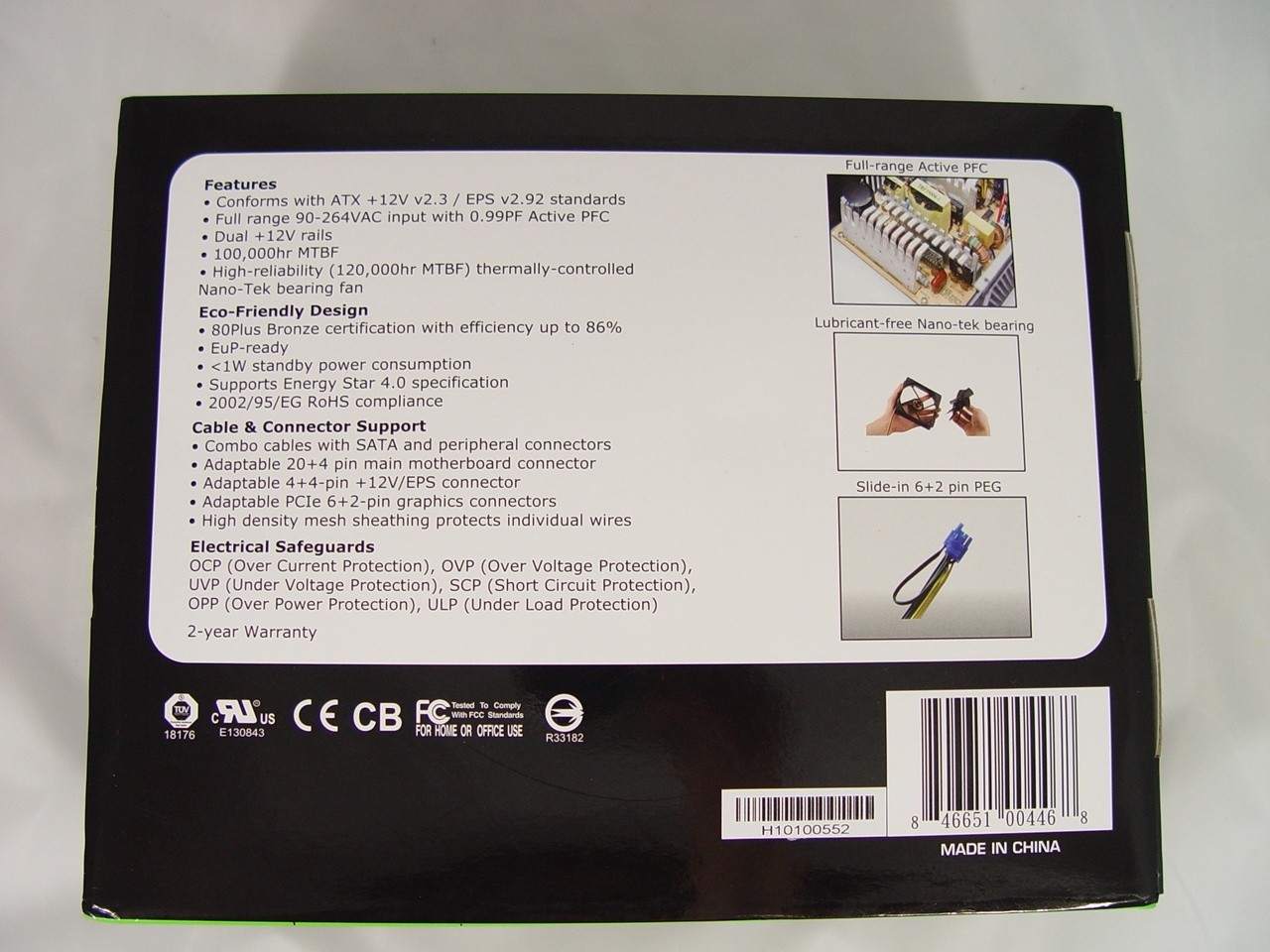 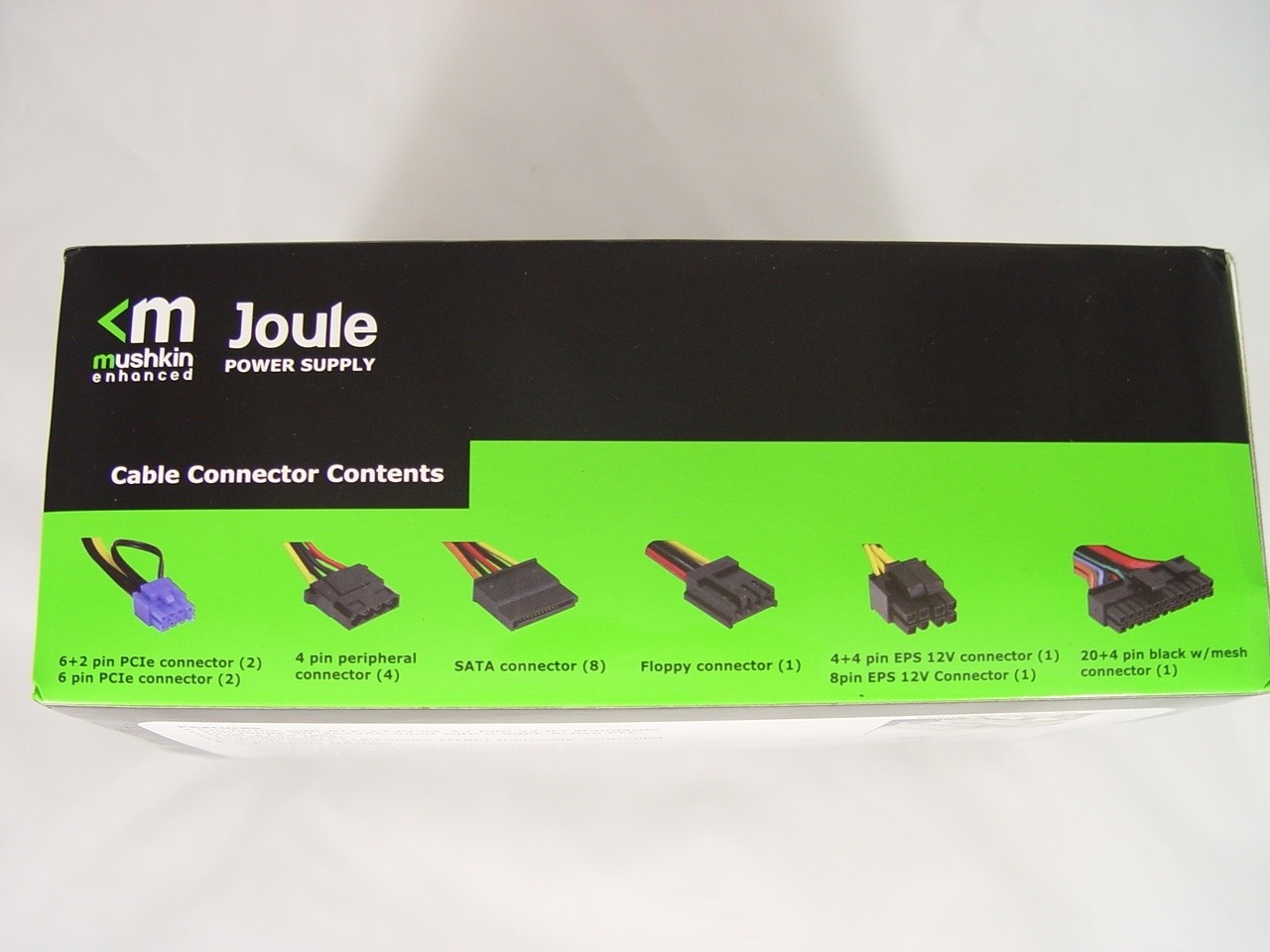 The top of the box provides us with a list of the connectors that are available with the Joule 700W power supply. It doesn't list the number of cables or their length, but is better than nothing. 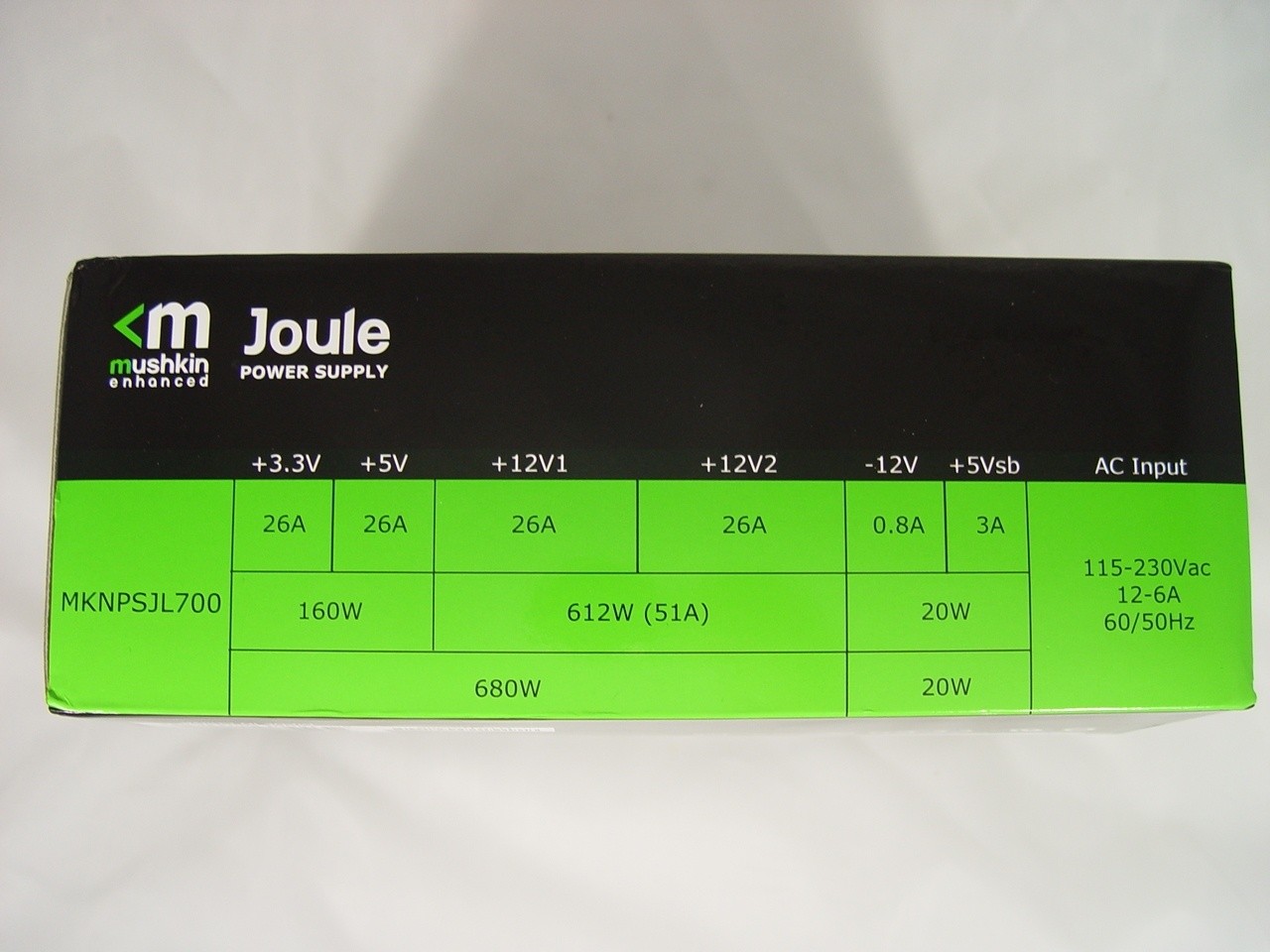 While the two sides are blank and don't provide us with any more information, the I/O Specification label can be found on the bottom of the box. 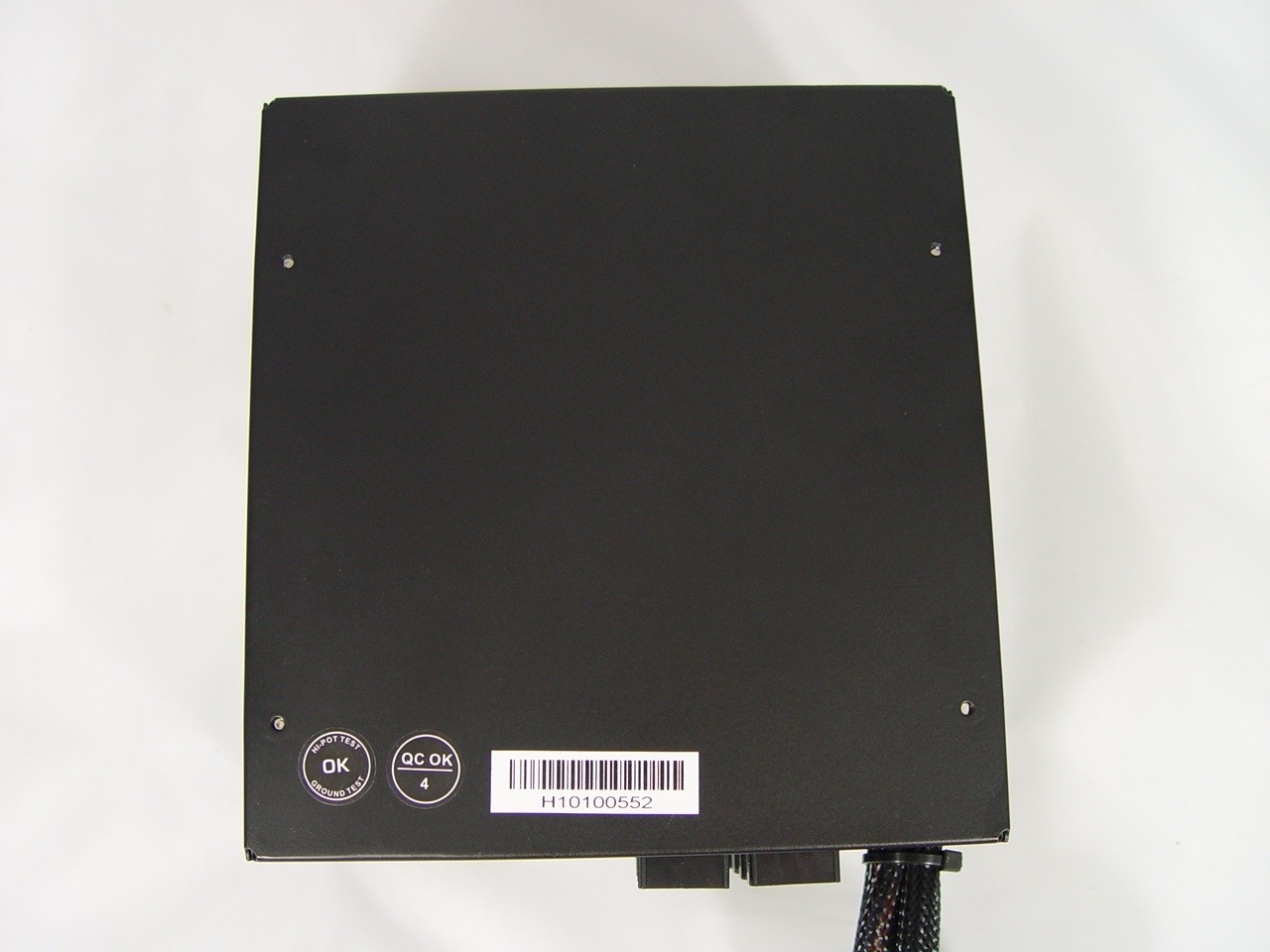 The Joule 700W arrives well packed and completely undamaged. On the top we find the serial number and some QA stickers. 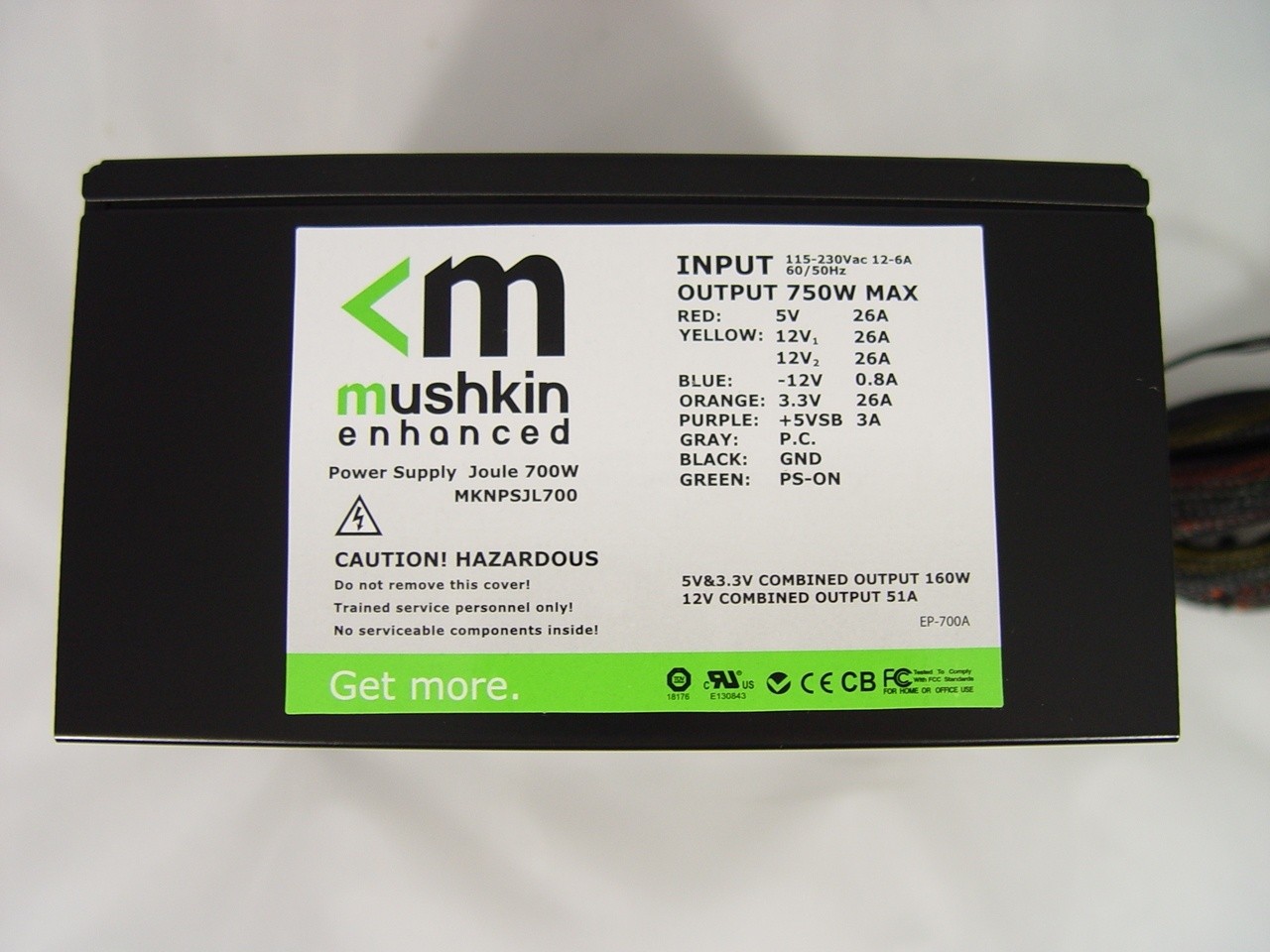 One side of the Joule 700W is completely blank, but the other houses the I/O Specification label. 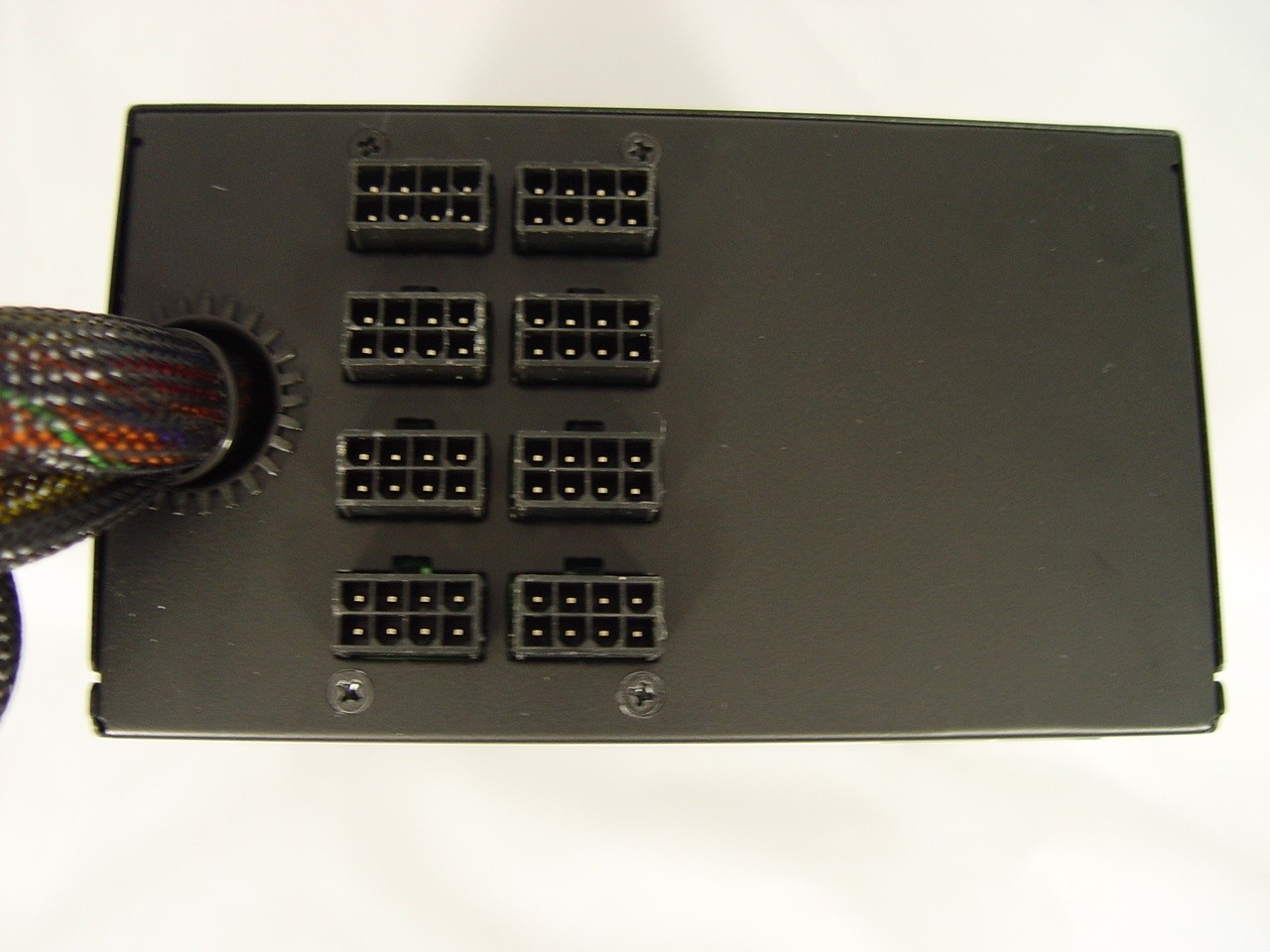 On the front we find the modular connections that were lacking on the Joule 800W. 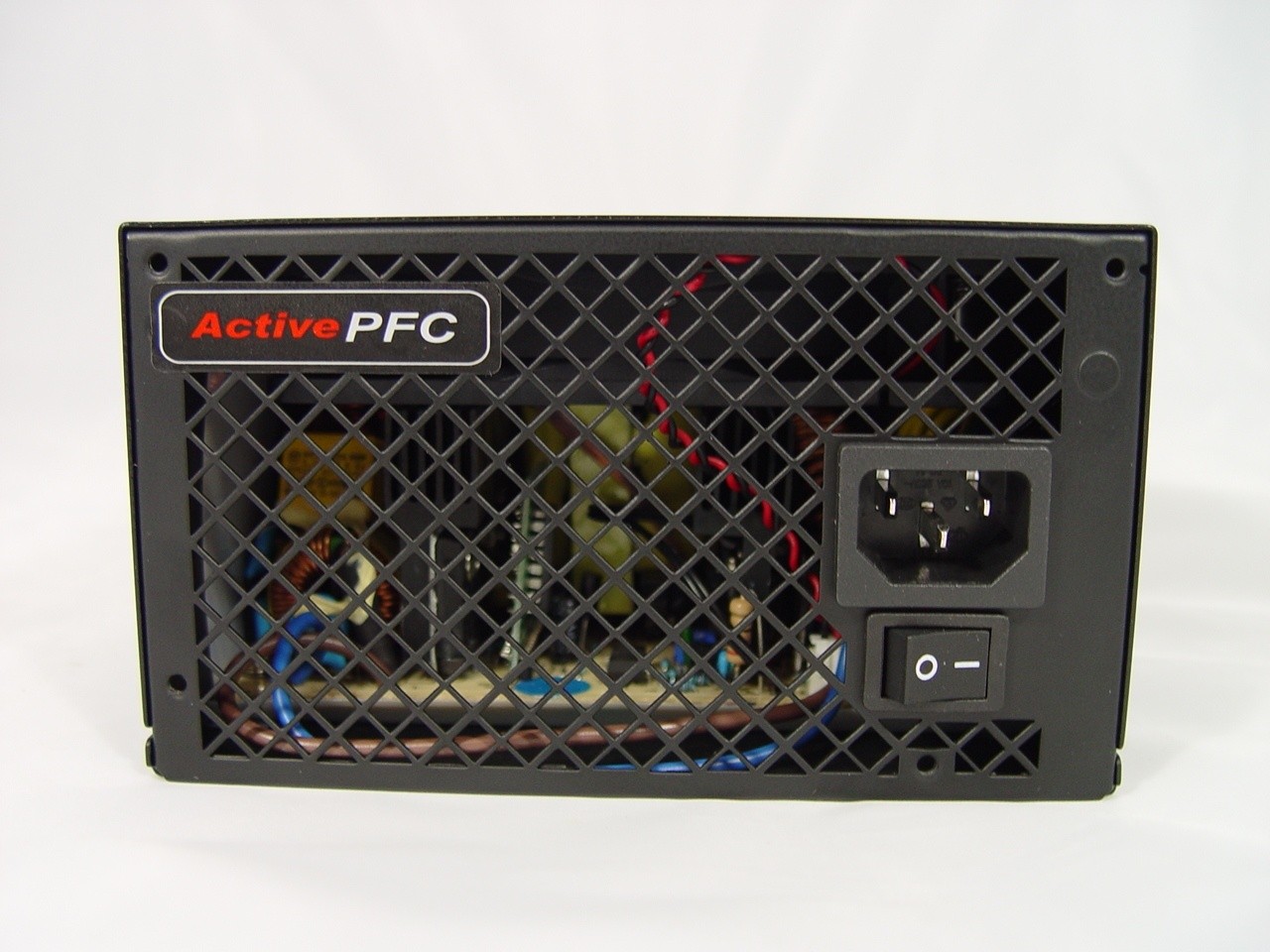 Moving around to the back of the power supply, we find the same very open mesh grill that we saw with the Joule 800W. Also found here is the AC input and on/off switch. 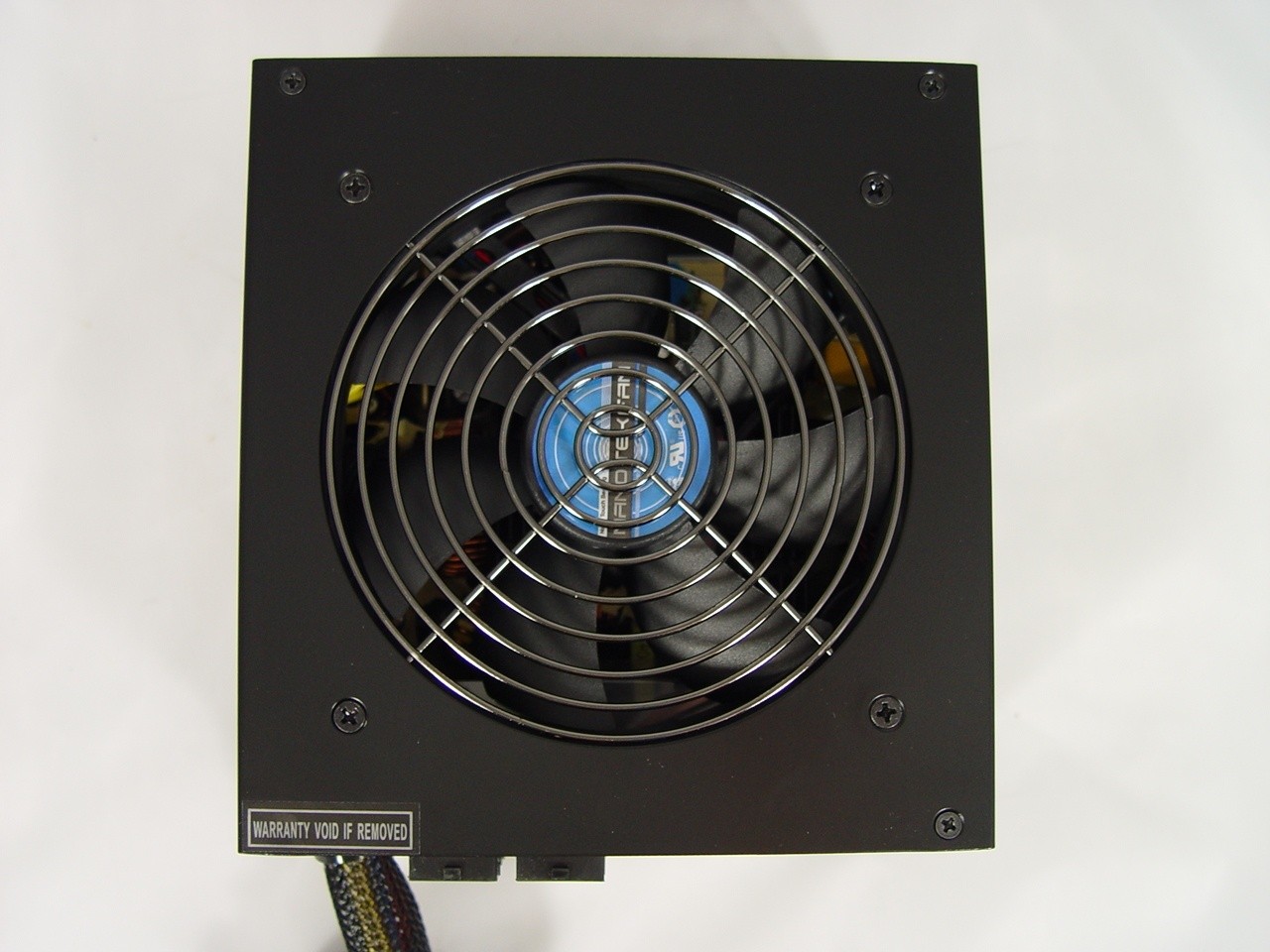 Checking out of the bottom, we find what appears to be the same 120mm fan cooling the Joule 700W that we saw in the Joule 800W. 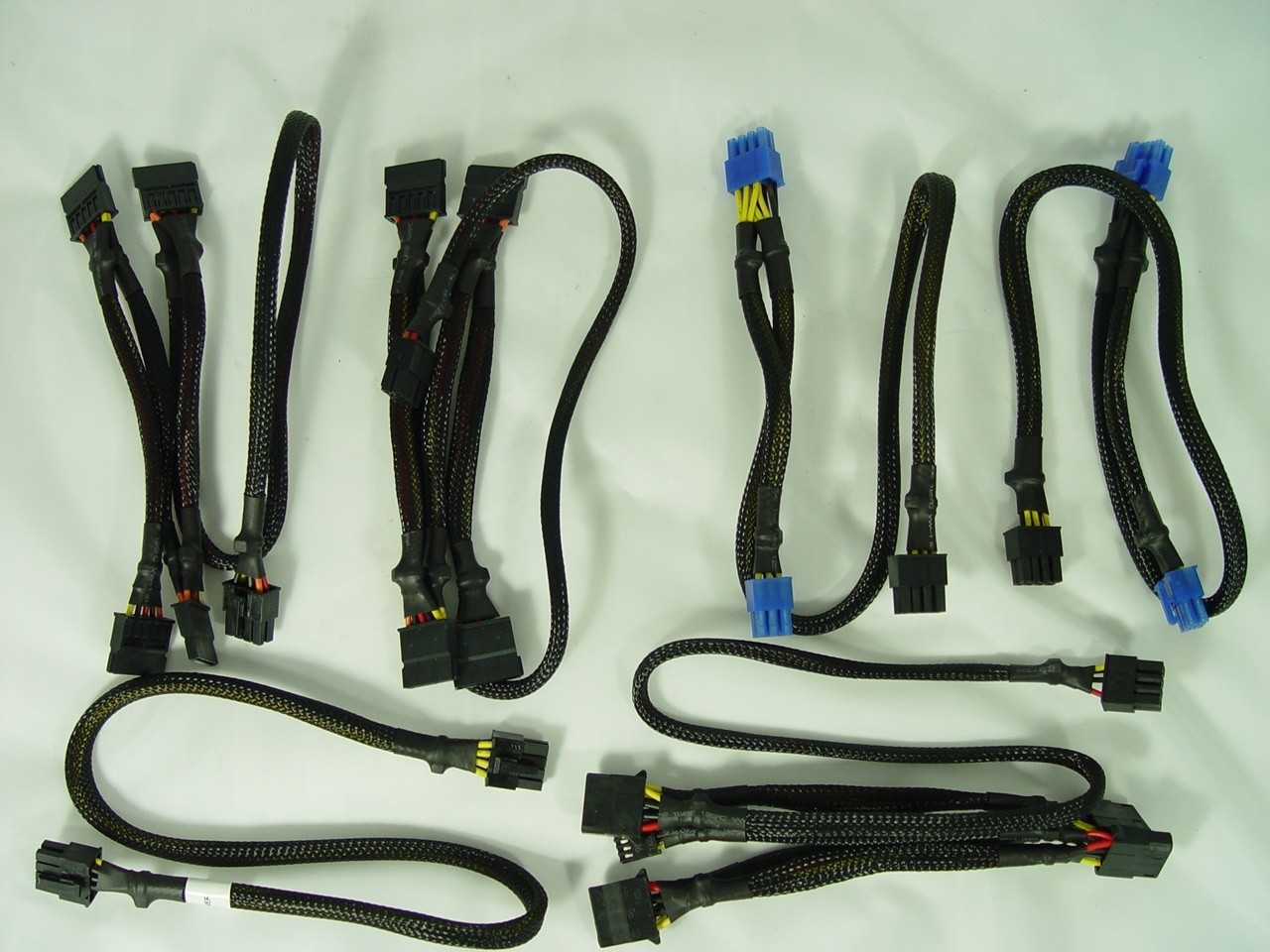 There are six modular cables included with the Joule 700W. There are eight modular connectors on the front of the power supply, so you have some room for additional cables and connectors if you need them. 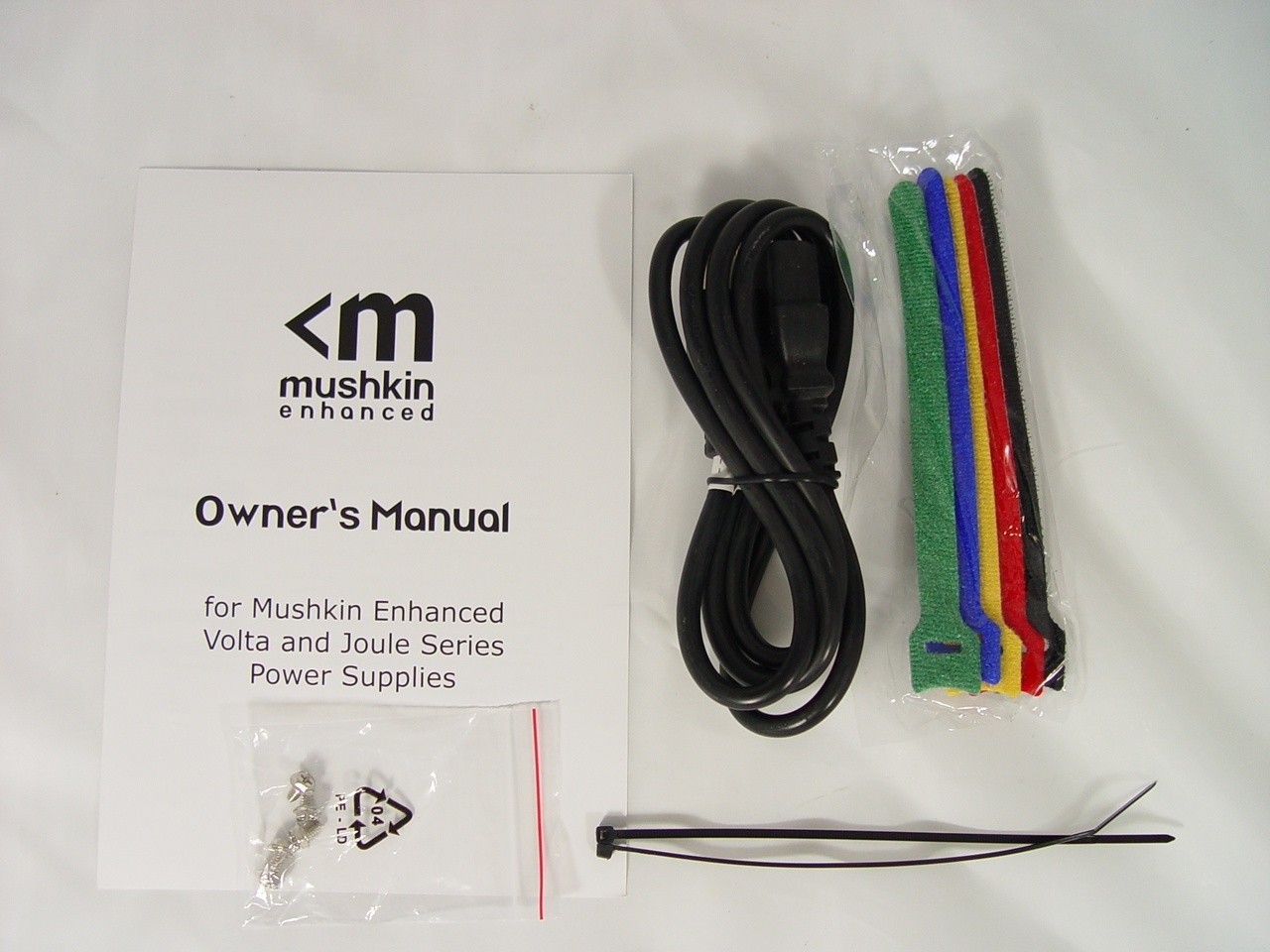 Also included in the box are some mounting screws, the AC input cord, a pair of zip ties, some reusable velcro cable ties and the owner's manual.

Mushkin's Joule 700W power supply features dual 12V rails. While the manual doesn't specify how the rails are split up, it is rather easy to trace things back to the PCB. 12V1 powers the Main connector and half of the modular connections. 12V2 handles the rest of the load which is comprised of the fixed ATX 4+4 connector and the other half of the modular connections. 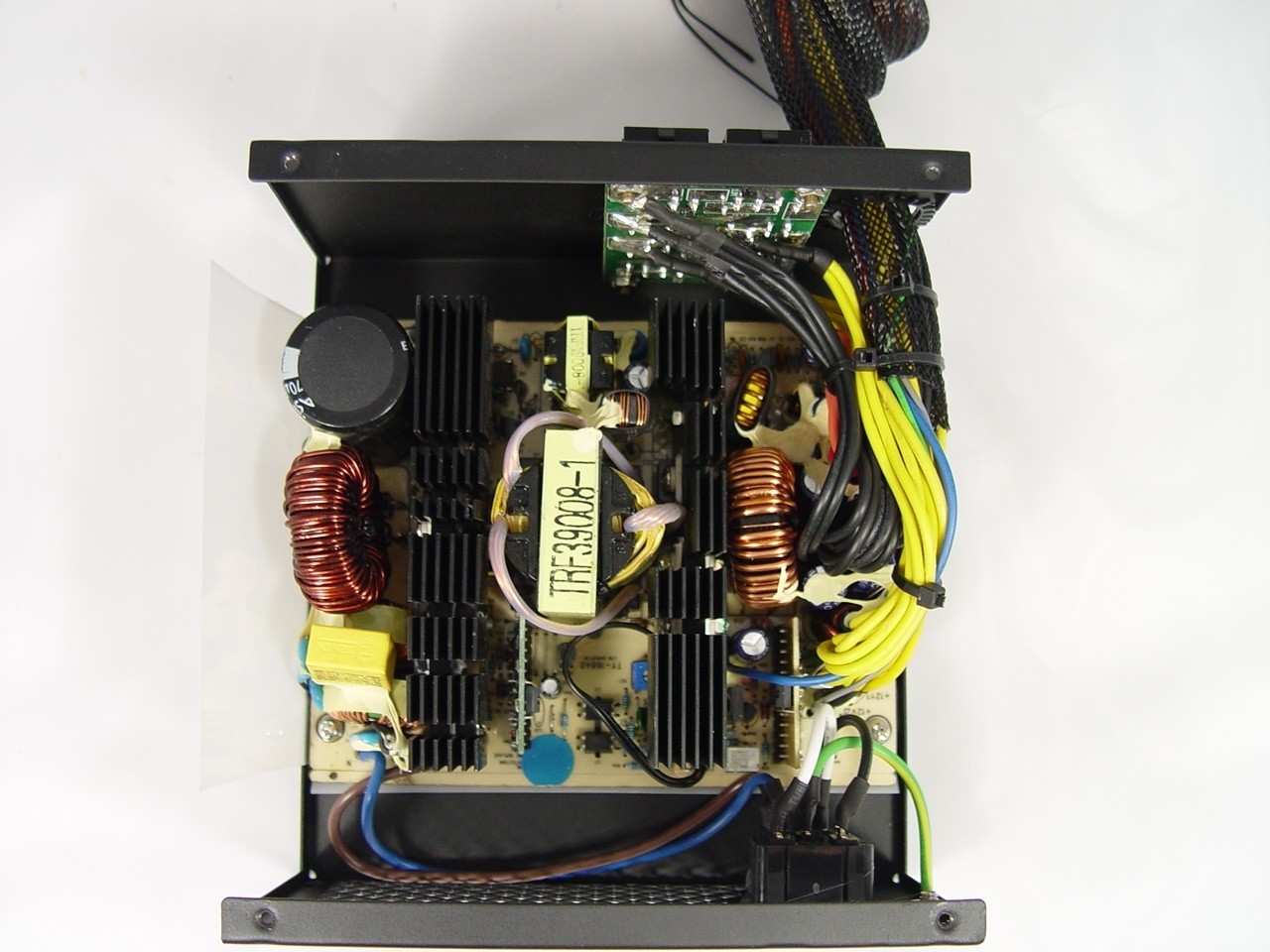 Popping open the Mushkin Joule 700W PSU reveals that everything is different when compared to the 800W version. Not only are about half the components present, but even the PCB is about an inch and a half shorter. 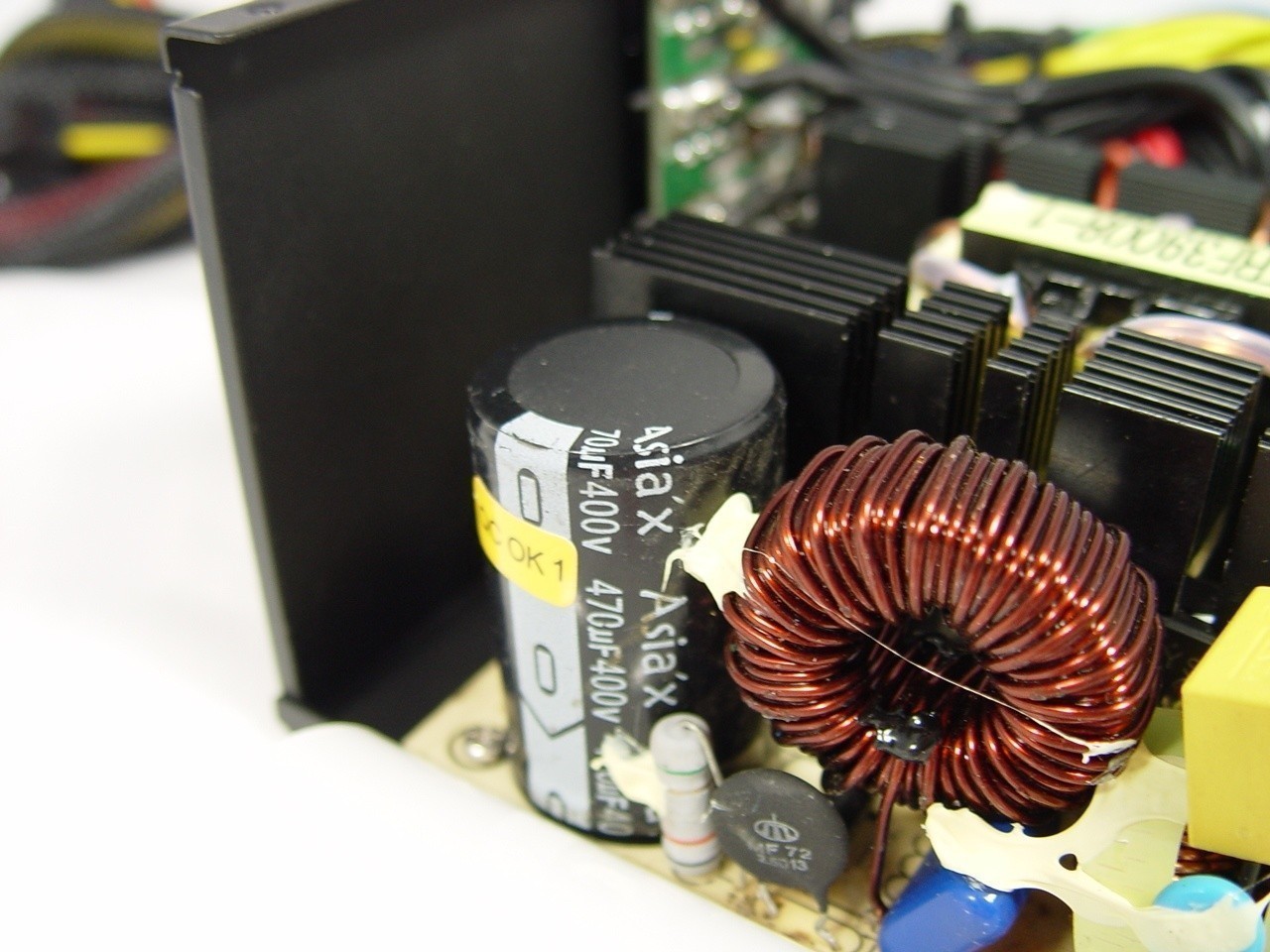 Over on the primary side we find a capacitor brand that most of our readers probably haven't seen before. Asia'X capacitors are manufactured by parent company Fuhjyyu Electronic Industrial Co., Ltd. Fuhjyyu is known to work very closely with Teapo and has their manufacturing done in China. 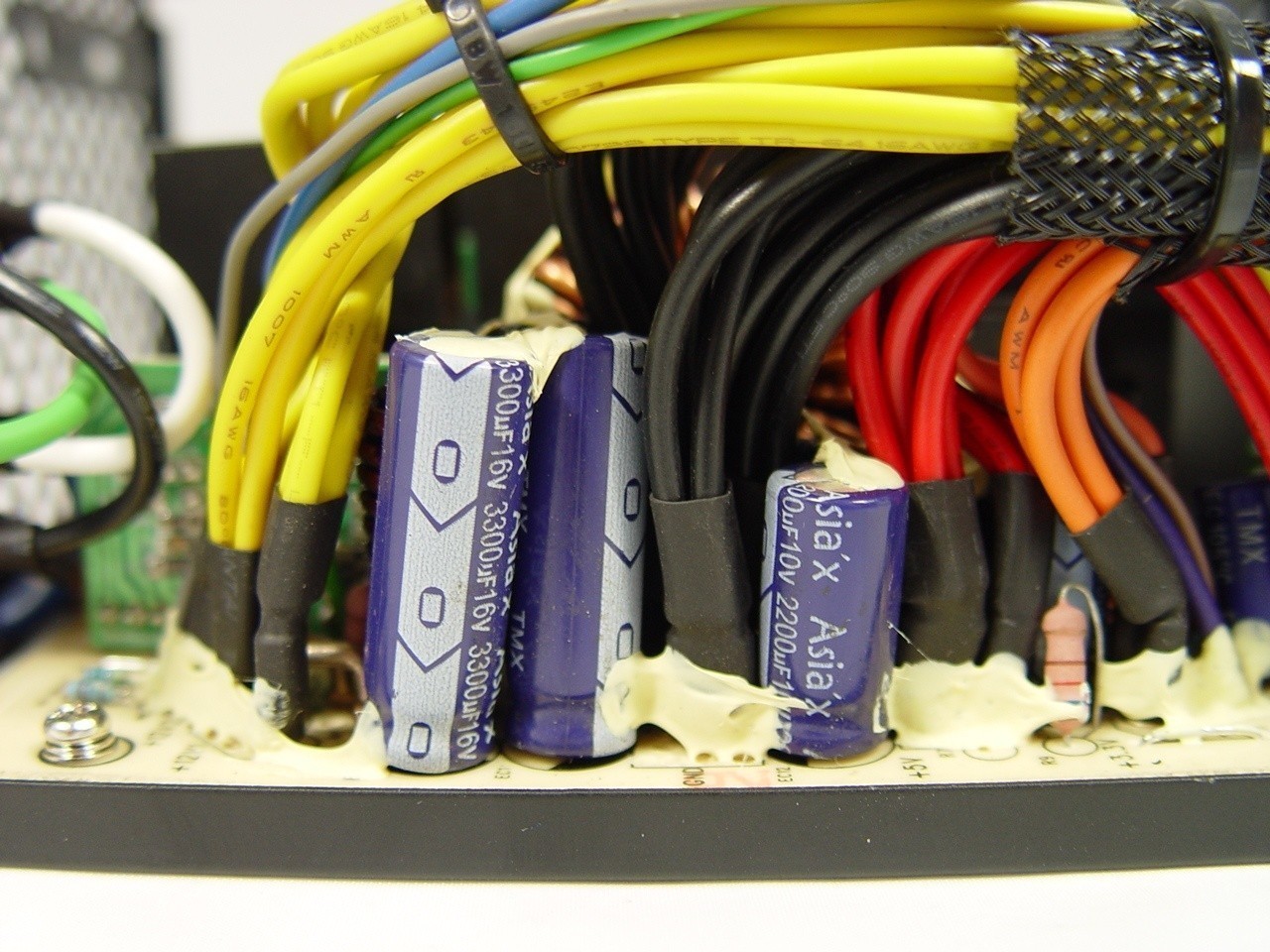 All of the capacitors on the secondary side are of the Asia'X brand as well. 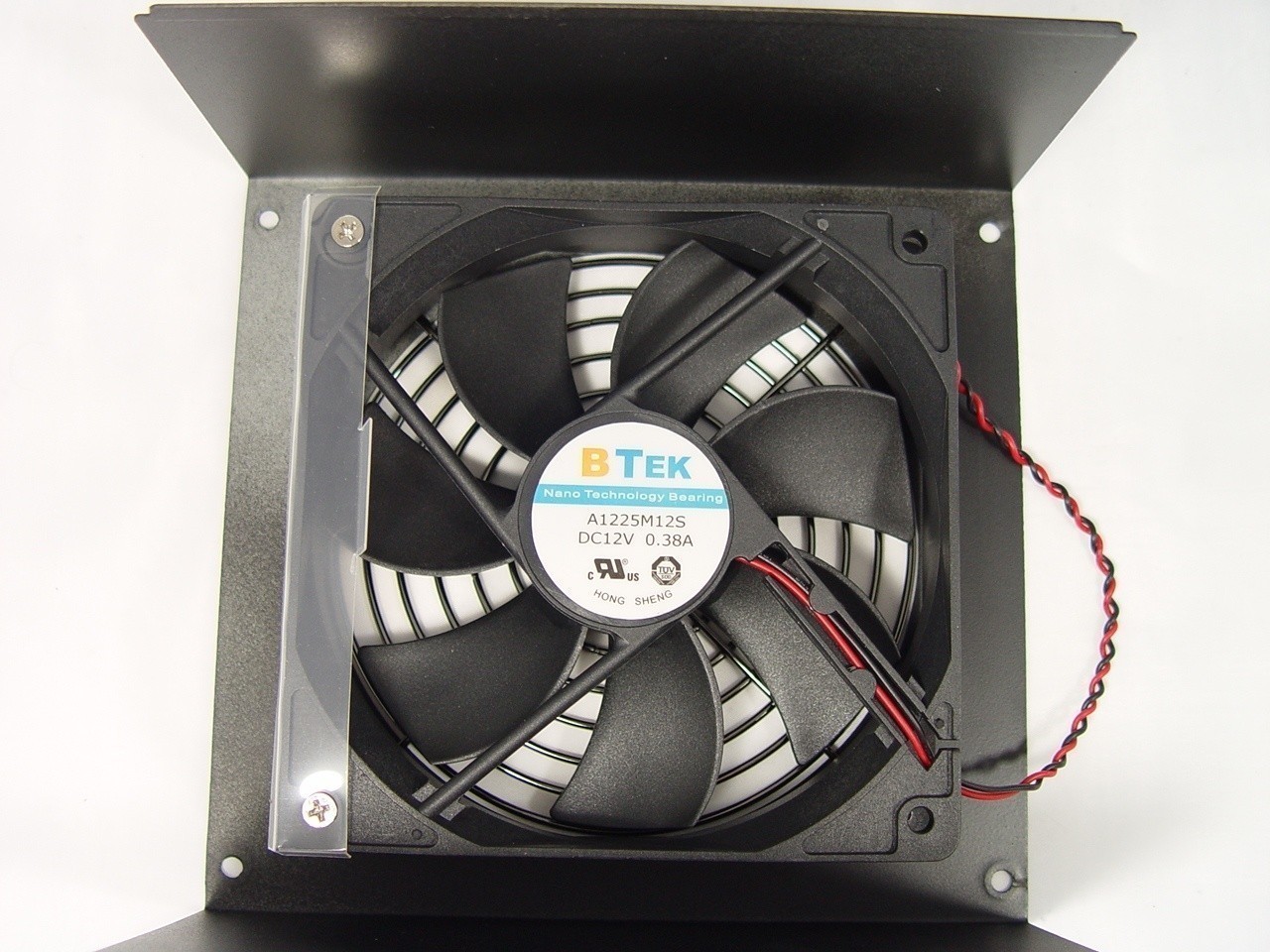 Cooling the Joule 700W power supply is another BTek fan, albeit a slightly different model than what the Joule 800W utilizes. This one is model A1225M12S.

The tests performed are based around six conceivable setups that are out there and progressively load down the PSU up to the power supply's limits or 1000W, whichever comes first. Since our test equipment's limits are greater than that of the Mushkin Enhanced Joule 700W, we can test it to the maximum.

Noise wasn't quite as spectacular with the Joule 700W compared to what we saw with the 800W version. It is quite a bit higher and starts out not too far from where the Joule 800W ended up. The Joule 700W power supply showed 14mV of ripple on the 12V rail during the first test and it crept upwards as the loads increased. During Test 2, we saw a maximum of 27mV peak to peak and that increased during Test 3 to 38mV of ripple. During the full load test of Test 4, we saw noise on the 12V rail at a maximum of 47mv peak to peak. This is still what we would consider a good amount of noise, but it is rapidly nearing the range where we feel a little uncomfortable.

The Mushkin Joule 700W power supply does a great job of proving it is worthy of the 80Plus Bronze logo that is displayed on the front of the box. In order to receive the 80Plus Bronze certification, the power supply must be capable of 82%, 85%, and 82% at 25%, 50% and 100% loads respectively. At no time does the Joule 700W PSU even come close to the limits of the Bronze rating.

Mushkin's Joule 700W power supply easily passed all of our tests with plenty of room to spare before performing outside of the ATX specifications. Passing and excelling are two totally different things and the Joule 700W just isn't quite as impressive of a budget power supply, especially when compared to other offerings such as the Joule 800W. If you're on a really tight budget then the Joule 700W is certainly worth your consideration. However, for an additional $20, you can get much more.

The Joule 800W offers better voltage regulation, lower noise and better efficiency than the Joule 700W. On top of that, you get much better cooling on the inside of the power supply and better efficiency which is likely to make those extra few bucks pay for themselves over the years. The Joule 700W does offer modular cabling for those that are concerned with being able to keep things tidy. Either way you go, you're still getting a power supply that is capable of performing decently under full load and is backed by a two year warranty. 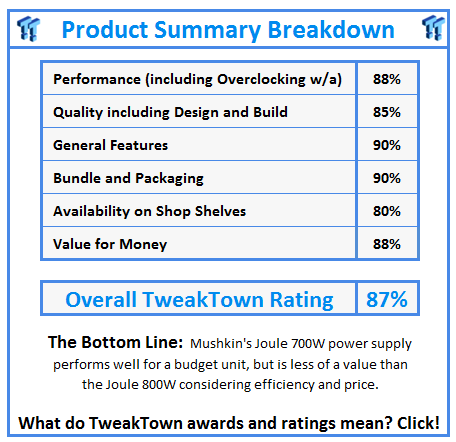