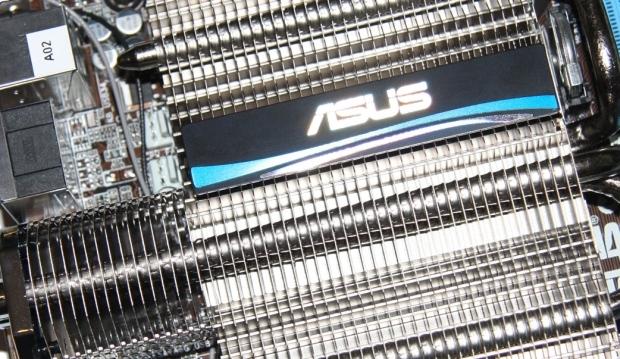 When I tested the GIGABYTE E350N-USB3 in February I was really impressed with what GIGABYTE and AMD were able to do with the E-350 based Fusion platform. One thing really bugged me about the board, though. The fact that it used active cooling was quite a disappointment, because it just felt like it didn't need it.

Well, ASUS have decided to go down the passive cooling path and in a good way with a very mean looking cooler included on the board. Before we get into the board itself, though, and the performance that the E35M1-I DELUXE is able to offer, we firstly need to see what's going on with the bundle.

The GIGABYTE E350N-USB3 was a very good board; can the ASUS E35M1-I DELUXE be a great one, though? Well, time will tell. 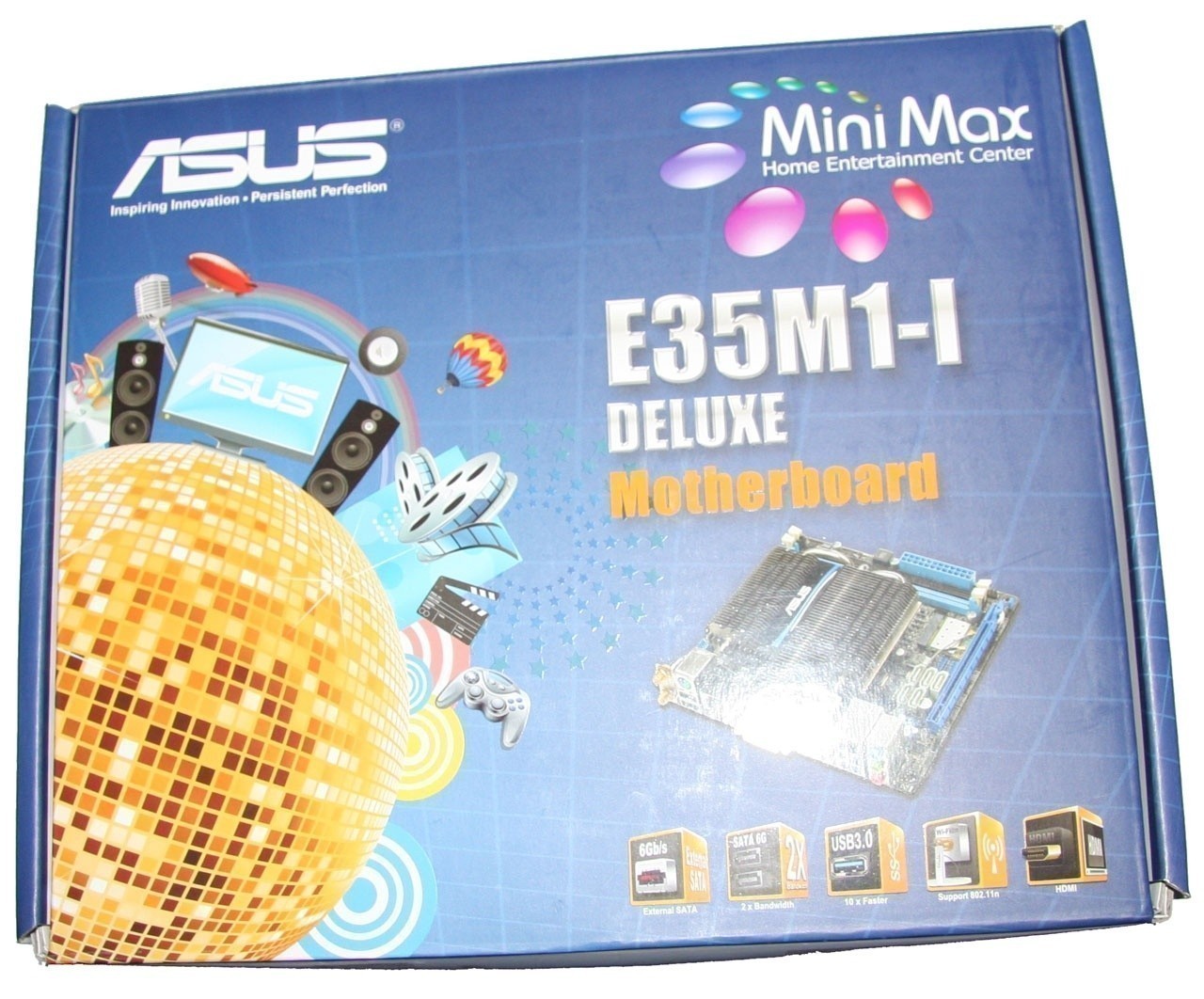 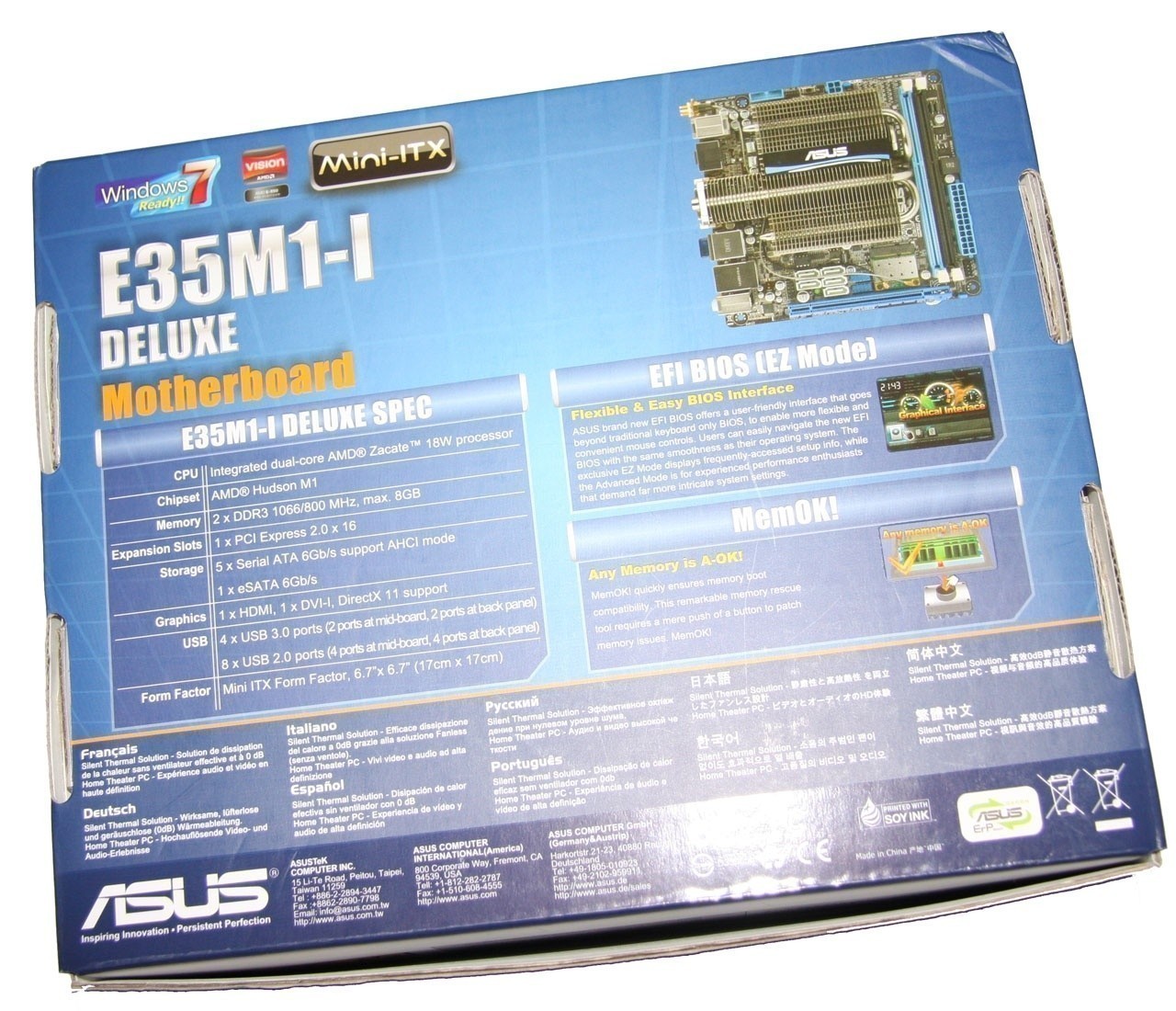 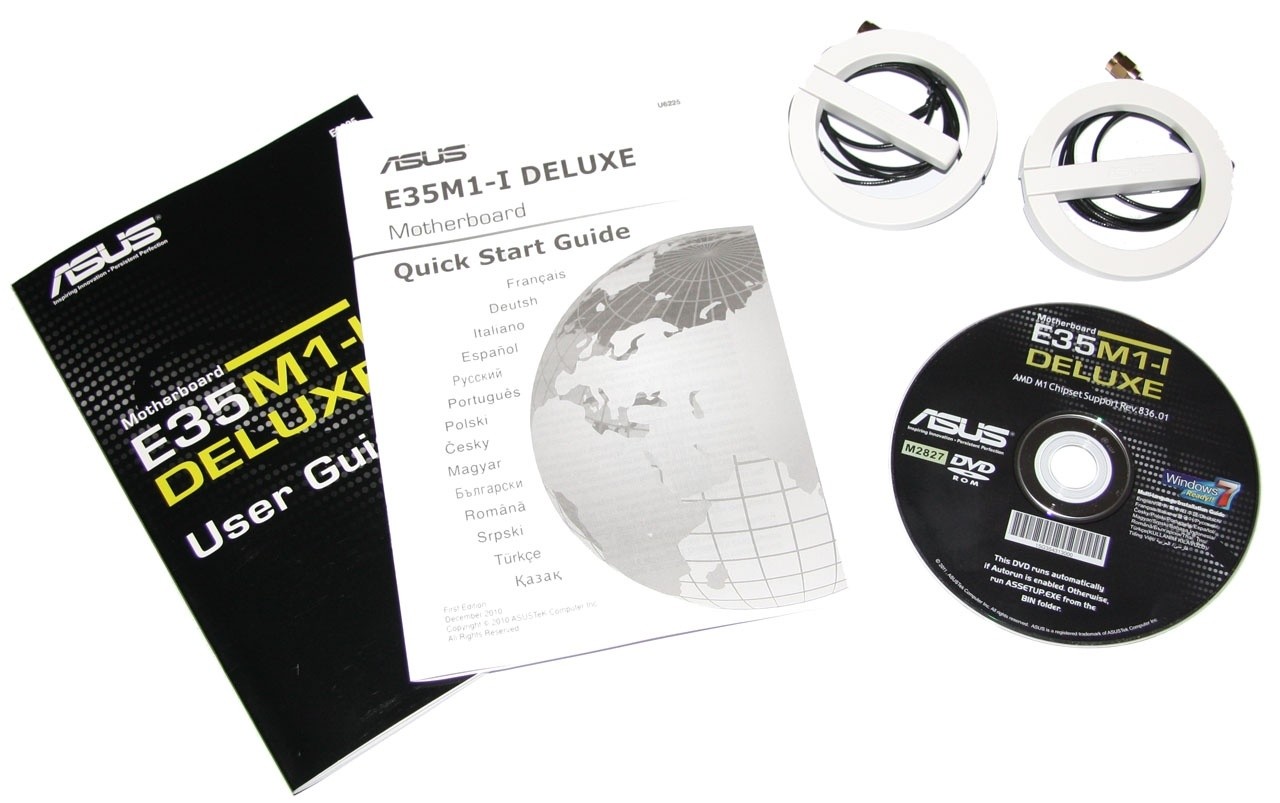 Being a mITX board, the overall package is of course quite small, but we can see some of the main features listed on the front of the box while we can also see a picture of the board. The back expands on everything a bit more and gives us a great run down of exactly what's on offer.

Inside the box we've got a User Guide, Quick Start Guide, Driver CD and two Wireless Antennas pictured. Not pictured are two black SATA connectors and the rear I/O face that are also included in the bundle. I ended up making use of them before I had a chance to take a picture unfortunately.

With the bundle out of the way, it's time to get looking at the board and as we mentioned, it's of course a mITX one which means it comes in very small at only 17cm x 17cm. Really, due to the size of the board, we hardly need to take any more pictures since everything can pretty much be seen. We will nonetheless, though. 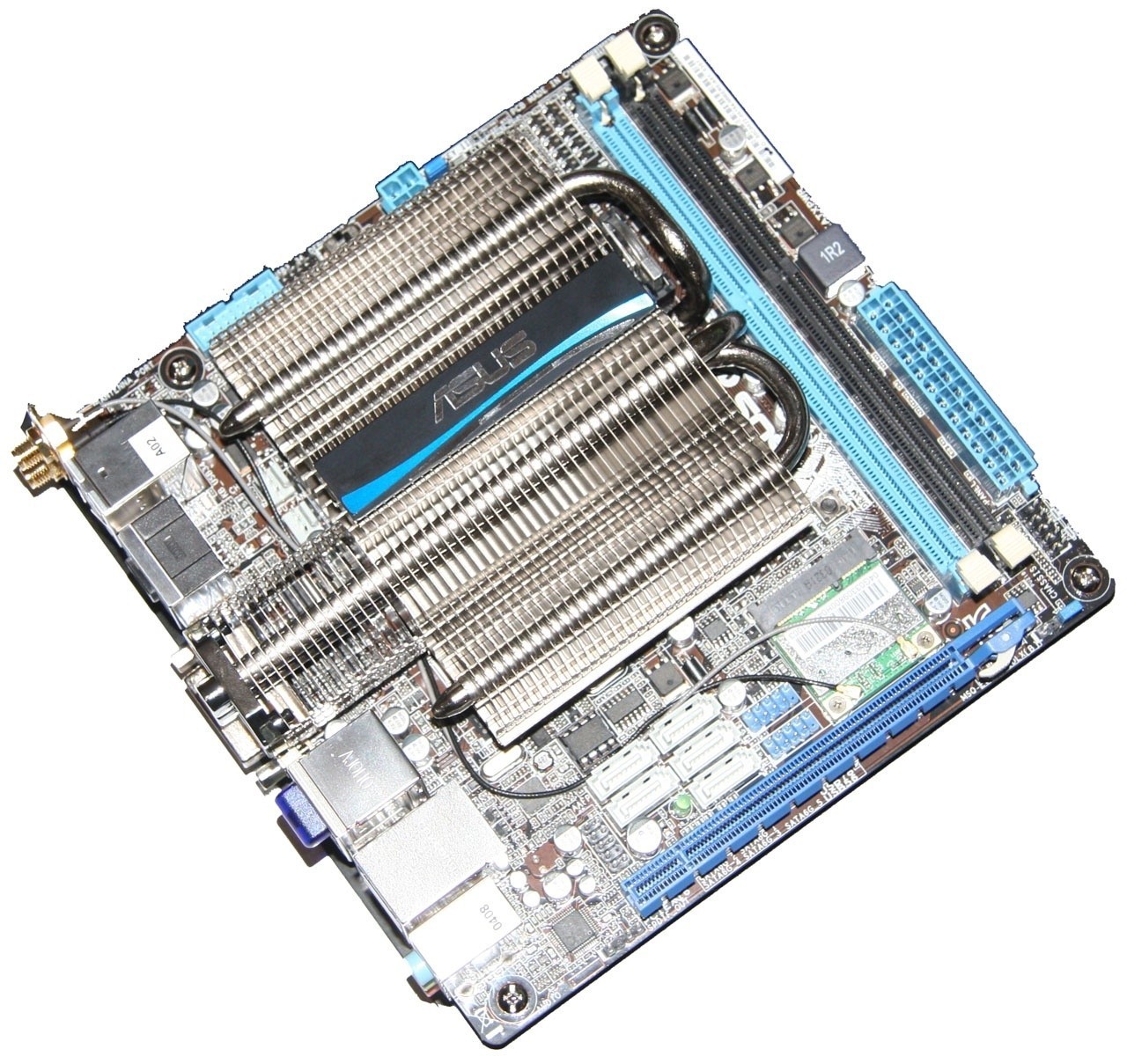 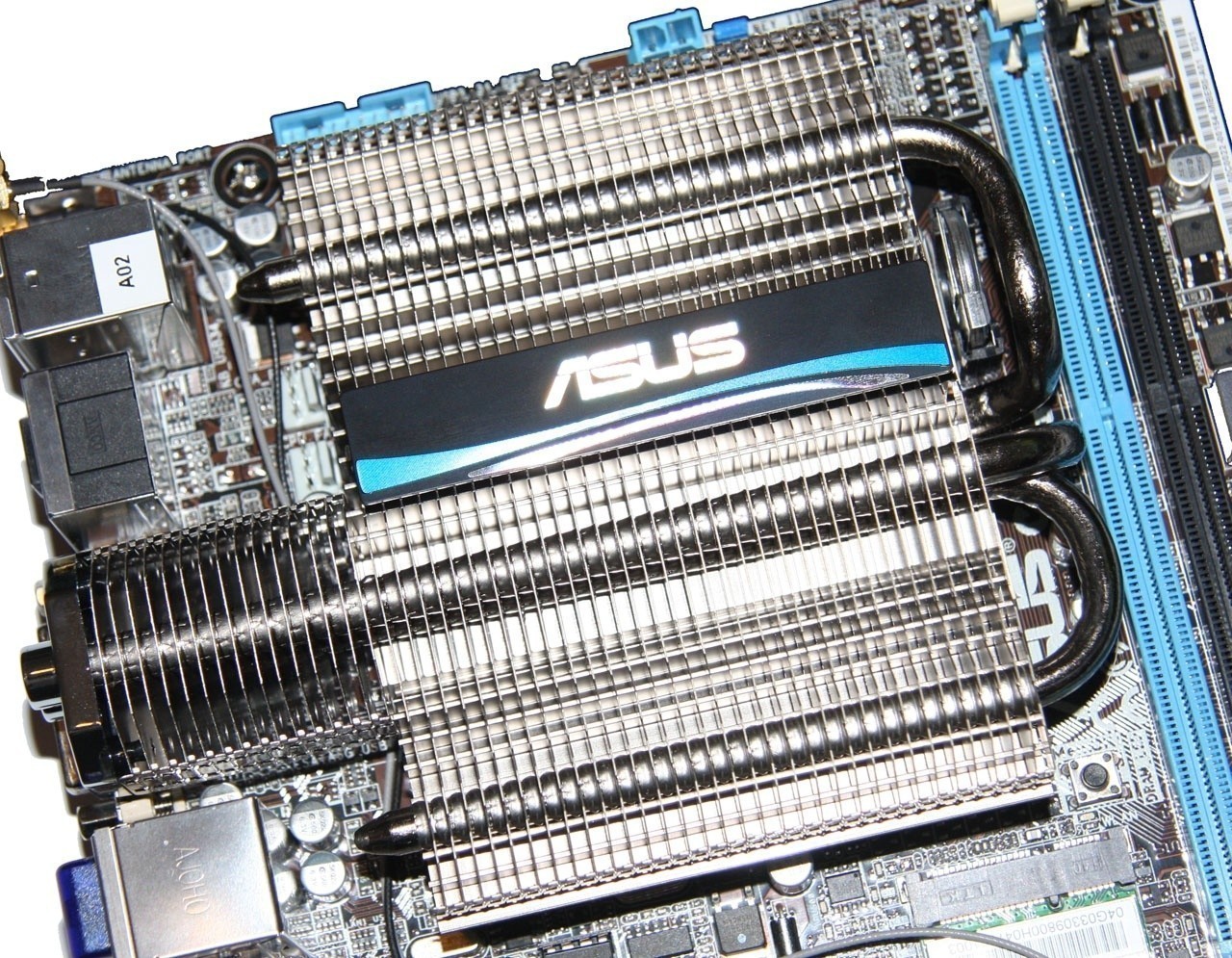 The highlight of the board for me is that massive passive cooler that ASUS have opted for. Clearly the Fusion E-350 platform needs a little more than just a basic heatsink if you're going to move away from an active cooling solution and you can see ASUS have really offered us something quite meaty looking. 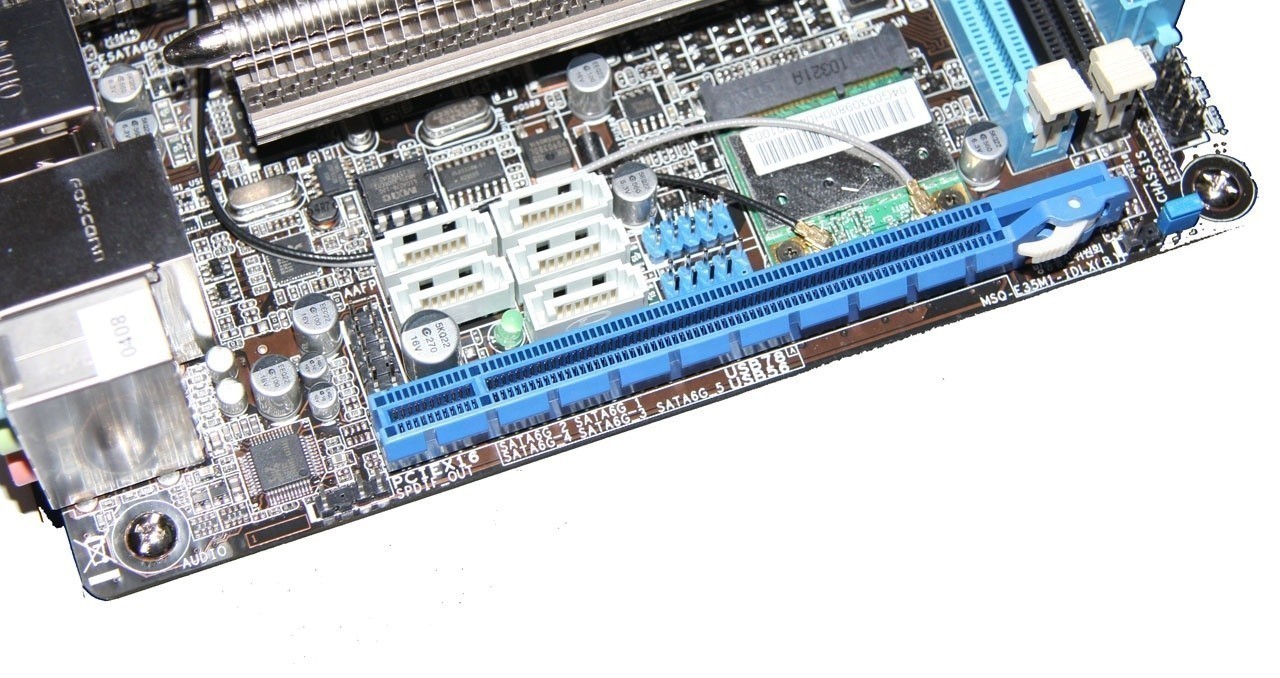 Below that massive heatsink we've got a few key features. At the very bottom we've got a PCI-E 16x slot. Like the E350N-USB3, though, the slot's only wired for 4x. What that means is while we can put a 16x product in like a video card, it will only run at 4x.

Above that and to the left we've got five SATA 6Gbps ports. Next to those, two USB 2.0 headers and next to that we have the Azurewave AW-NE785H wireless card which supports 802.11 B/G/M and here supports two antennas which we saw in the bundle.

Moving around the motherboard a bit, we can see our header for power, reset and etc. buttons. Next to that we've got our 24-Pin power connector. Taking up the majority of the motherboard length, we've then got two DDR3 memory slots.

The memory is only single channel and supports speeds natively of 800MHz DDR and 1066MHz DDR. Of course, the ability to install faster modules is an option, but some form of overclocking has to be done to push memory speed above the default ones.

Moving around to the top of the board, we've got a 4-pin power connector and next to that we have a switch that ASUS call "Turbo Key II." What this does is allows you to auto-tune the CPU to enhance system performance. It's really interesting to see companies put a bit of emphasis on overclocking with this platform. Next to the switch we have another USB header; this header does support USB 3.0, though, provided by the NEC chip.

Turning the board over to its side and checking the I/O part of things, we've got from the left, two Wi-Fi Antenna ports, PS/2 combo port, two USB 2.0 ports, HDMI, Optical and DVI-I. Above the DVI-I port you can see we've got part of the heatsink that is designed to let some of the heat be extracted outside the case.

For such a small board, we've really got a lot going on and it will be interesting to see how the board performs since ASUS have opted for the passive cooling solution. 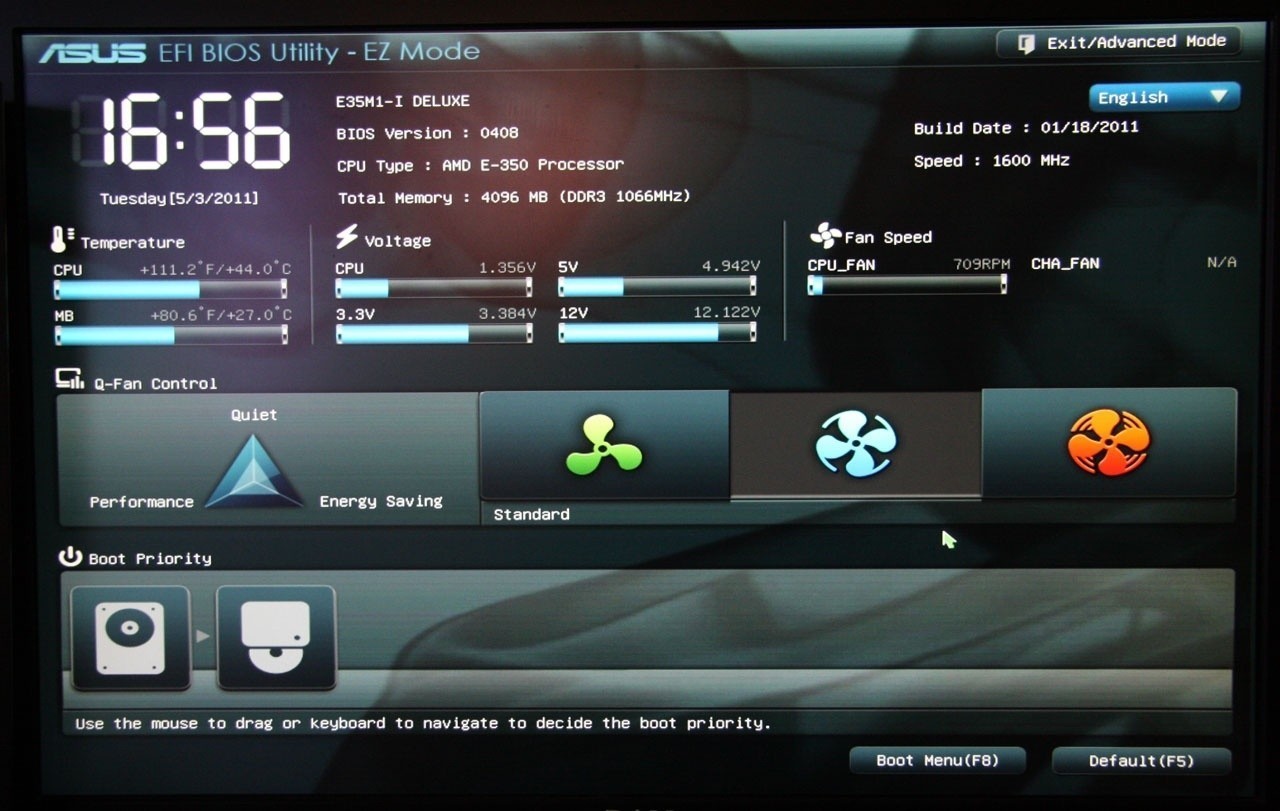 The E35M1-I DELUXE uses an EFI BIOS and it looks great. Going into the BIOS, you're greeted with "EZ-Mode" and that pretty much gives you access to basic features like the boot priority along with using the Q-Fan control in standard, quiet or performance mode. You're also greeted with some basic information related to CPU temperature, voltage, CPU speed, RAM amount and a couple of extra things.

If you go to the top right corner you can click Exit / Advanced Mode and move into the advanced options. 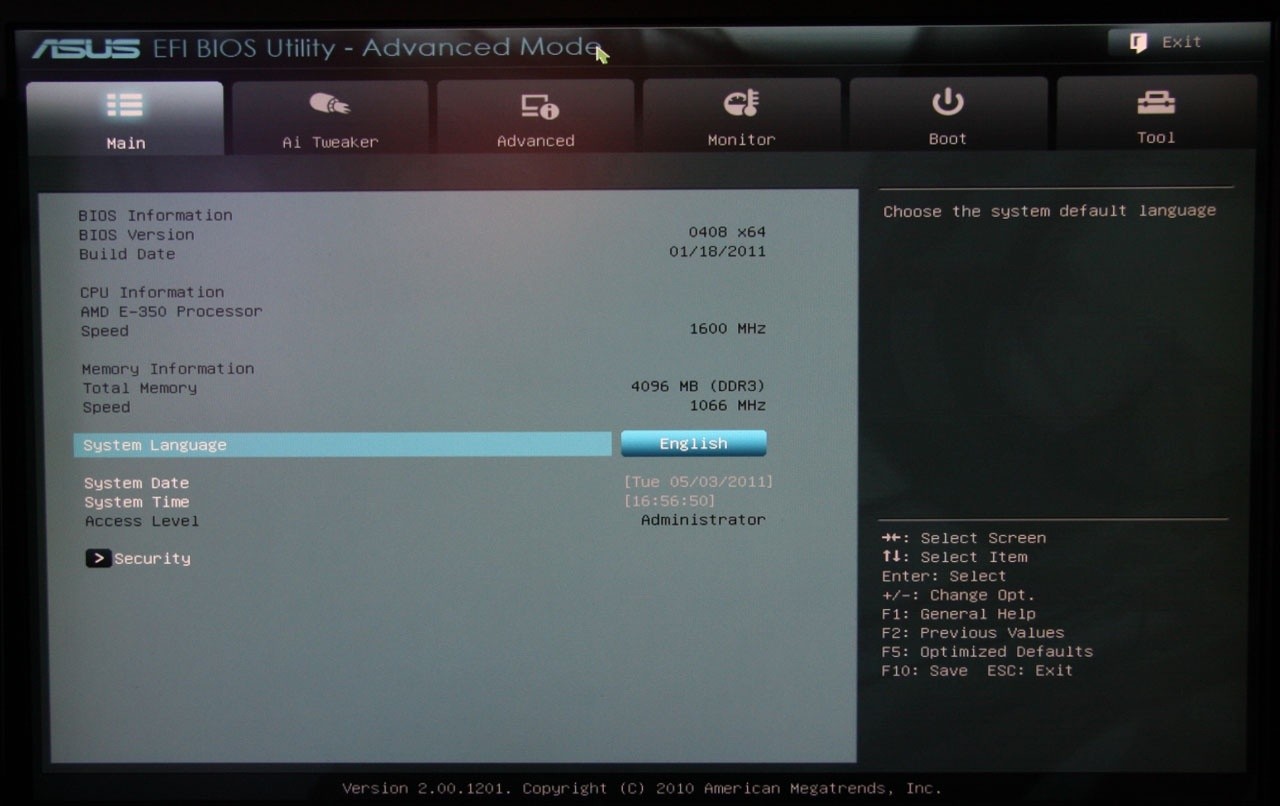 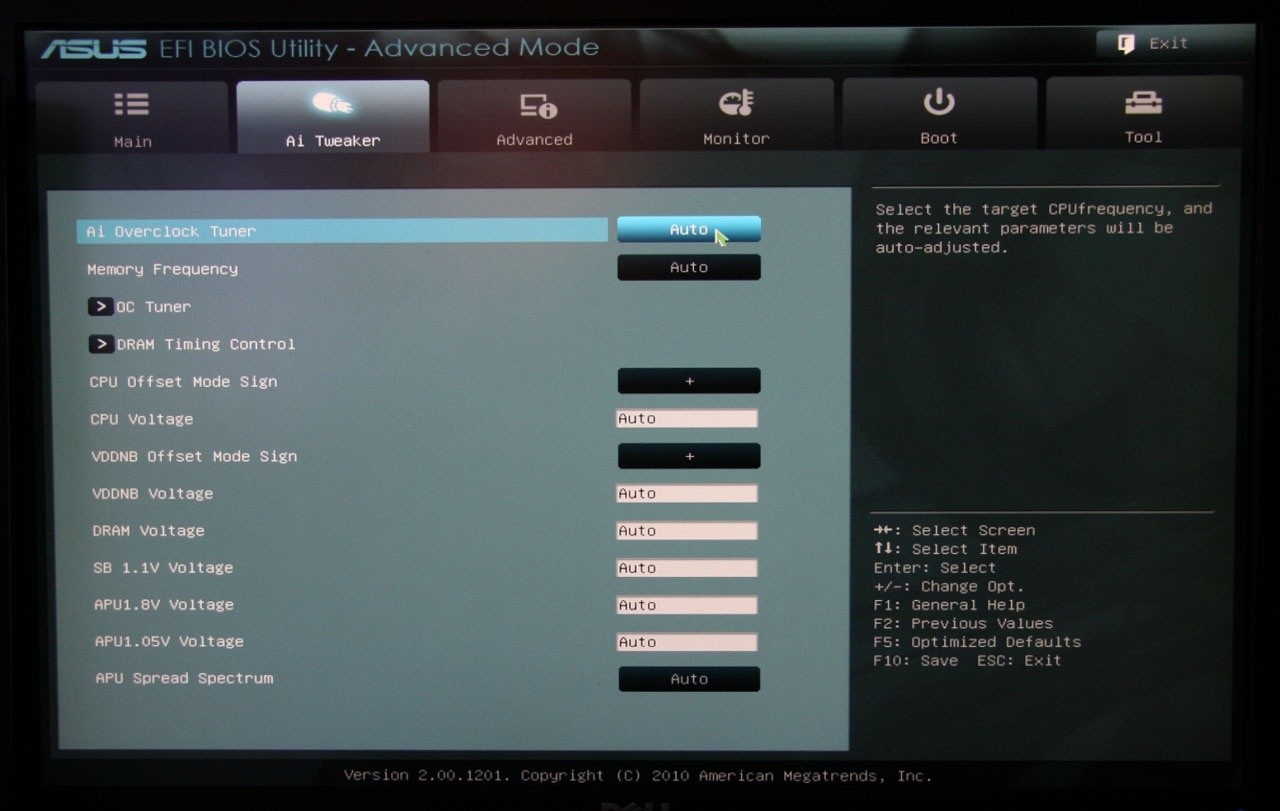 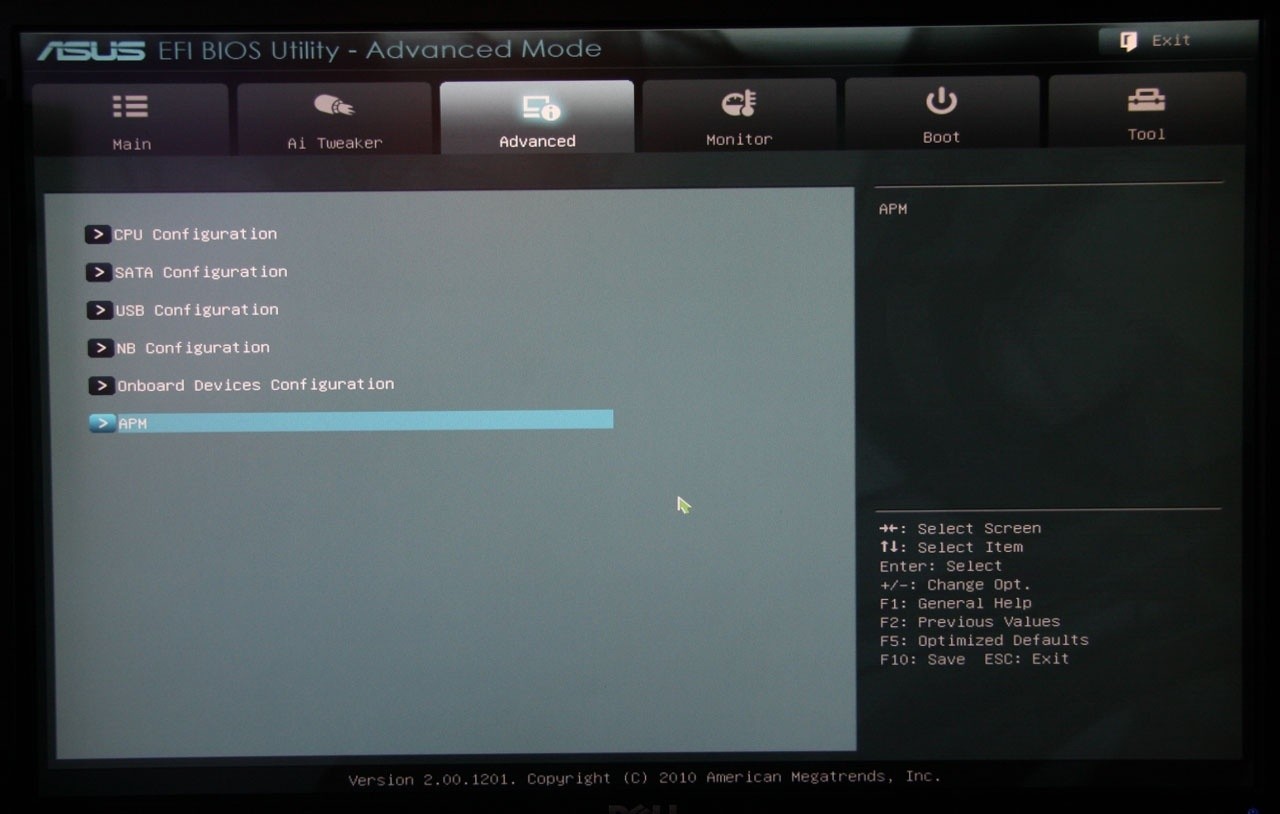 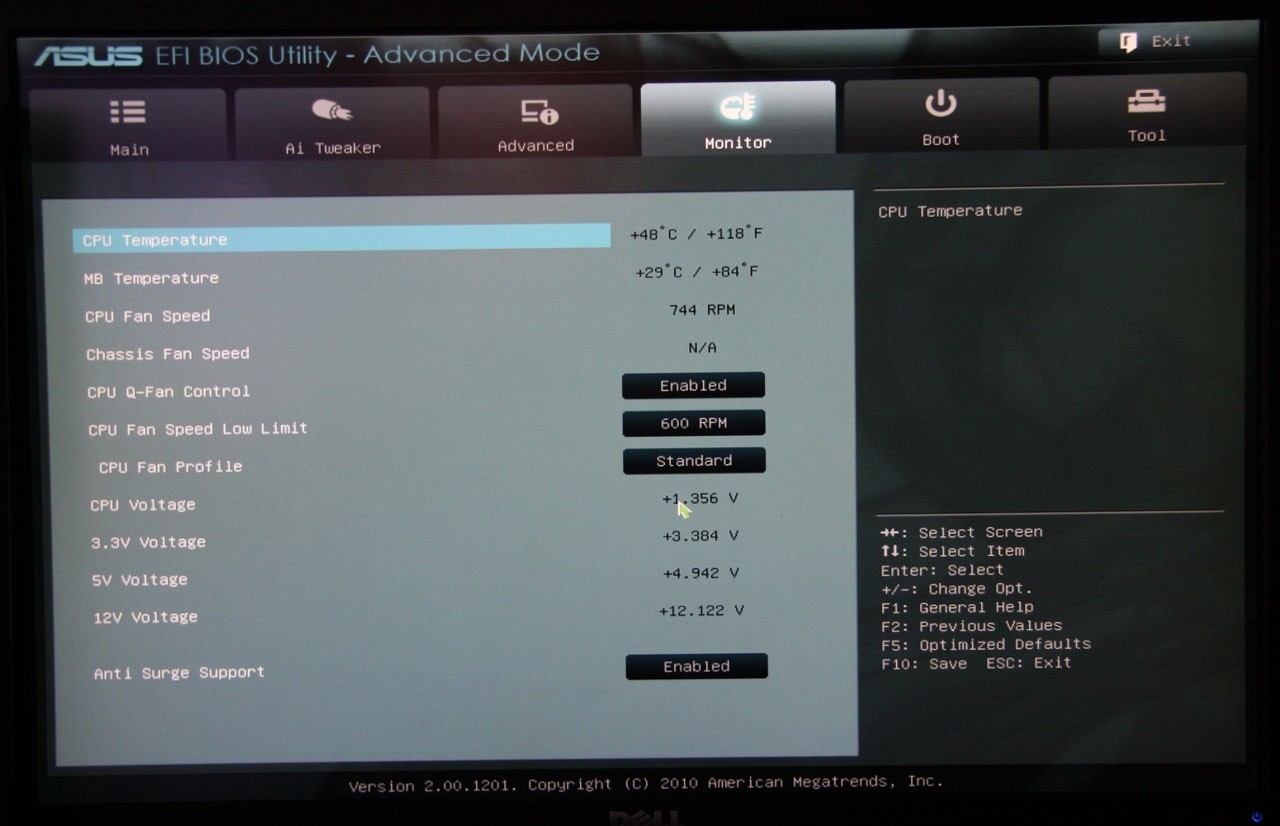 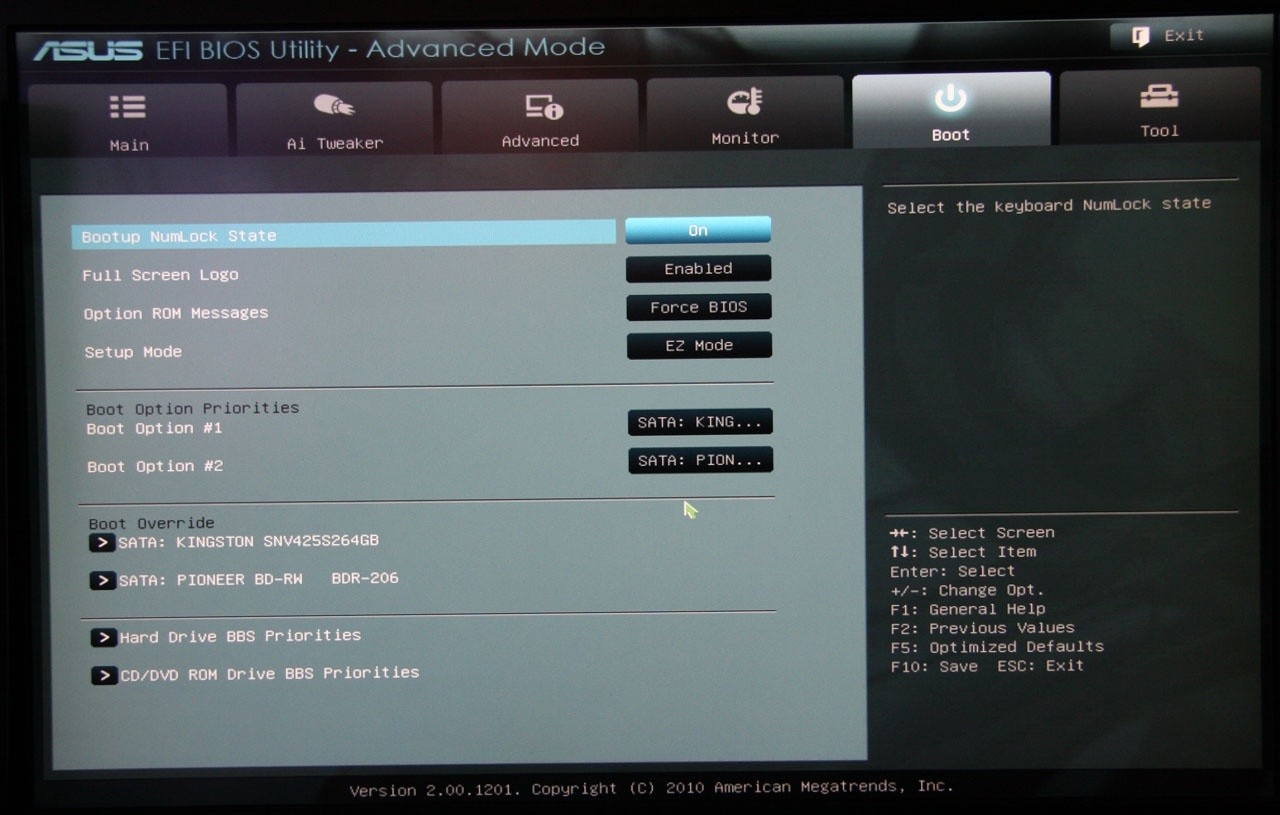 Moving to Advanced Mode there's nothing too out of the ordinary when it comes to the options. It's of course not as feature packed as higher end motherboards, as you don't need options for 20 different voltage levels. You do still have a good amount of options, though, and overclocking can be done automatically via the Ai Tweaker, or you can do it manually. 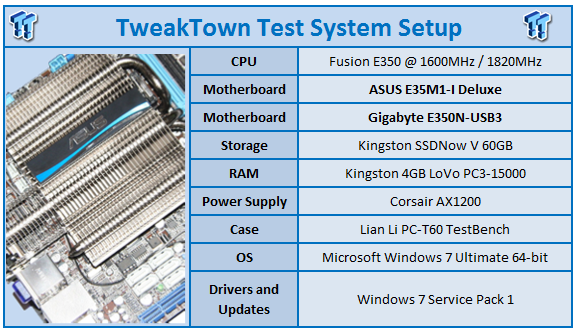 We would like to thank the following companies for supplying and supporting us with our test system hardware and equipment: ASUS, Gigabyte, Kingston, Mittoni and Corsair.

When you talk about these Fusion based boards overclocking isn't something that you really think about. Like the GIGABYTE board we looked at, though, we thought we'd see what was on offer in the BIOS and see what kind of performance could be achieved from it.

Surprisingly, the board clocked extremely well giving us a CPU speed in excess of 1800MHz. It actually ended up at 1840MHz and you're able to see our CPU-Z validation here. Although it says it's not validated, I'm not too sure why that is, but have a feeling it may have something to do with the fact we're working on a Fusion based board.

As for the comparison today, we'll be looking at the ASUS E35M1-I DELUXE at its stock speed against the GIGABYTE E350N-USB3, also at its stock speed. We've also of course included the ASUS board overclocked and it will be interesting to see how this silent solution performs compared to the previous Fusion motherboard we looked at. 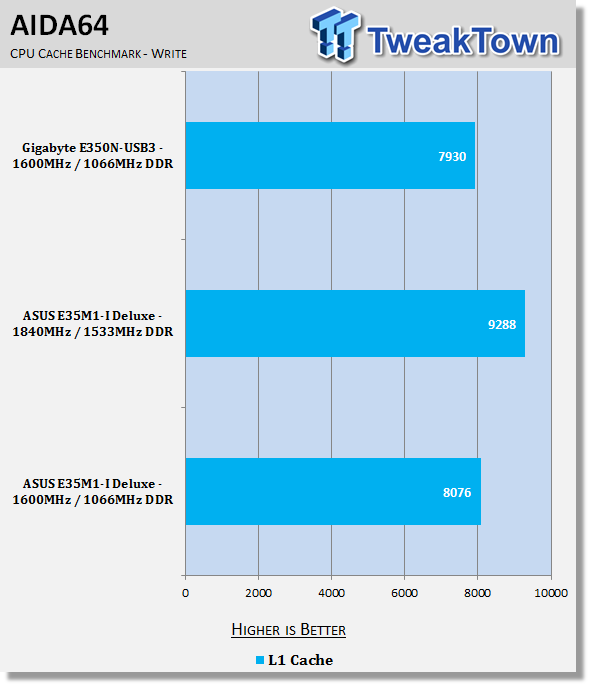 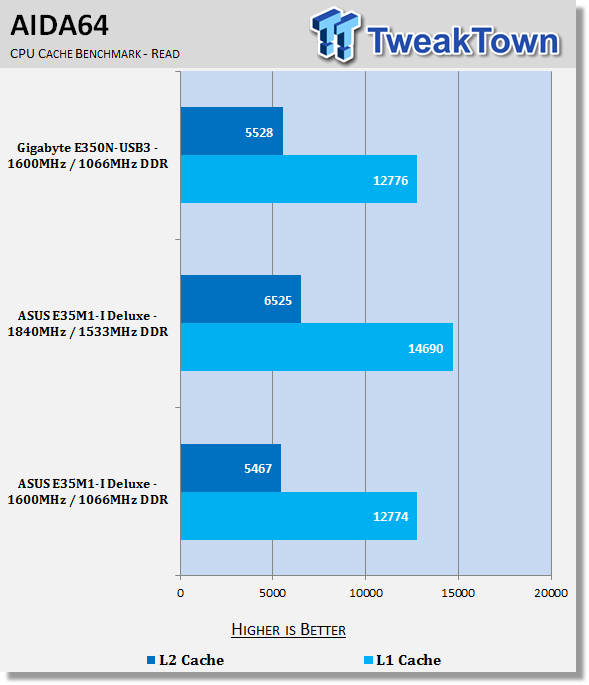 At stock settings you can see that both boards perform very similar to each other. When moving up to over 1800MHz on the E-350 APU, though, we do see some great performance from our little Fusion based motherboard. 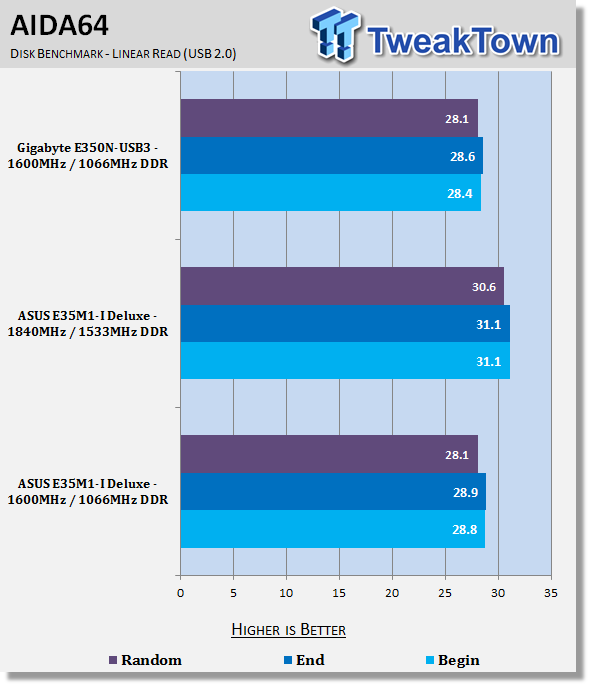 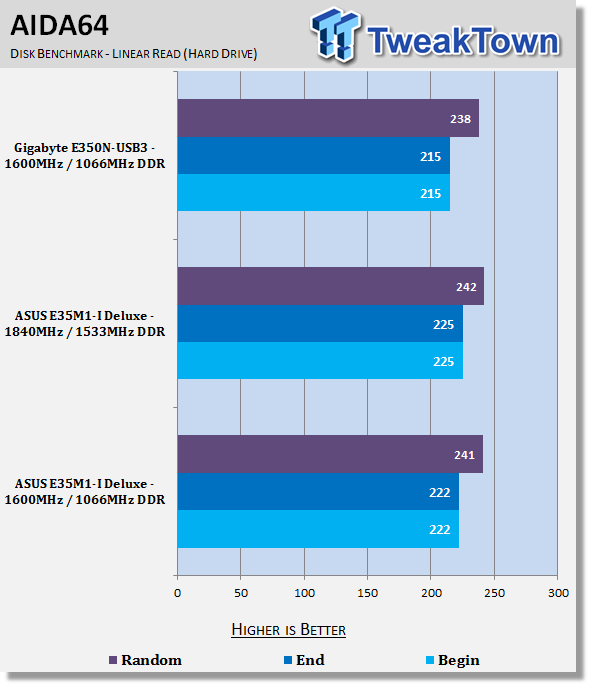 Looking at the performance on our SSD, you can see that it seems to be just a little stronger than the GIGABYTE offering. There's very little in it, though. 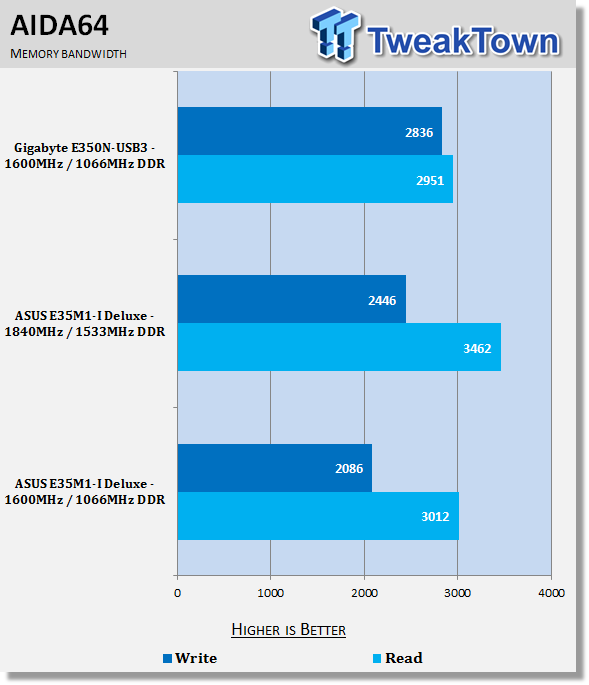 While write performance is a little down on the ASUS E35M1-I DELUXE, we can see that Read performance is up and continues to grow even more when our memory gets to 1533MHz DDR. 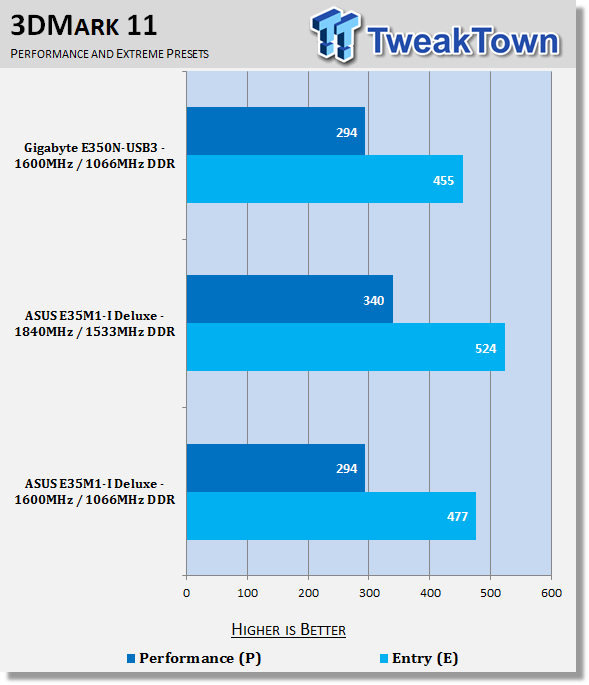 Performance is quite low as you would expect. This isn't a system designed to do any real gaming except maybe some Windows and Flash ones. Saying that, you can see when we overclock there's a nice little boost in performance which is pretty cool. 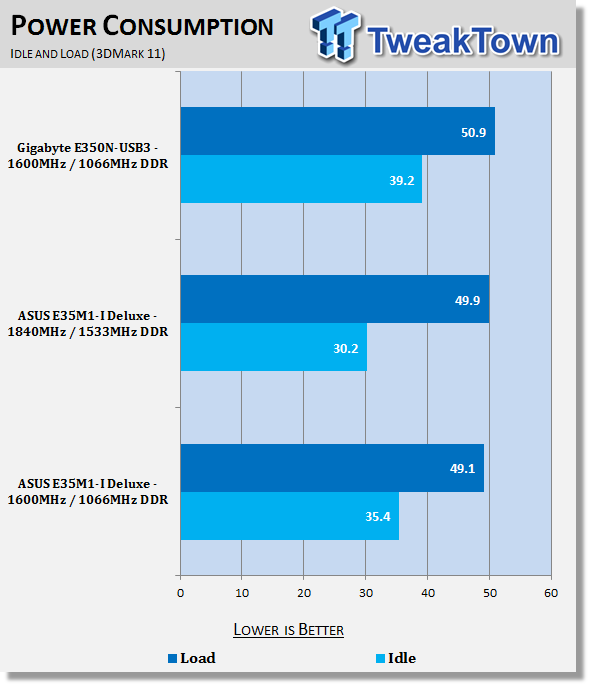 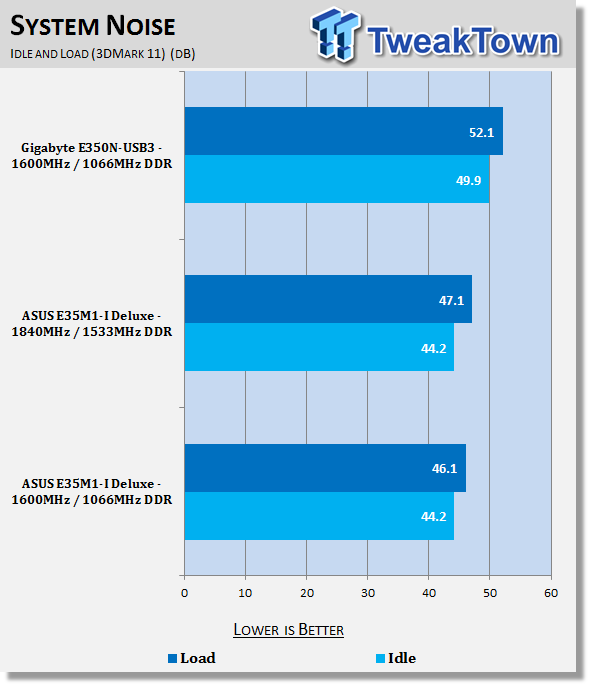 The system is pretty much silent; there's really only a PSU fan making noise and it's almost impossible to hear. I'd put the 40dB rating down to more noise that surrounds the area than the setup itself. It really can't be heard.

ASUS have done a fantastic job of making sure that their Fusion solutions stand out more than the competition. Adding a passive cooling solution helps separate the board from others and you can see it's a serious solution and not just some cheap looking passive setup that we've seen others use in past solutions.

Outside of that, though, the addition of the EFI bios is fantastic; a lot of people might find they're not in there often, but if you do decide to jump in, it's a great BIOS to use. EZ Mode is friendly and easy to use while Advanced mode really does give you a good amount of options.

There are actually so many options in advanced mode that we were able to up the speed of our E-350 to 1840MHz. At that speed we did see a nice little boost in overall performance. Where it was best seen, though, was around the desktop and watching HD content which was not an issue for the Fusion based PC at this speed.

While the ASUS E35M1-I DELUXE is the most expensive Fusion based board listed carrying the E-350 APU at $174.99 US, it's clearly going to be one of the best, if not the best option just because of the quality in regards to the design of the board.

Sure, you can go the path of a cheaper option, but stand outs like the heatsink ASUS have opted for, the EFI BIOS, strong overclocking potential and just overall quality of the board mean you'd be hard pressed to go the path of another one. The only reason not to choose the ASUS option is probably price, and even then you should think twice if you can stretch your budget that bit more.

This is just a great board that's really going to appeal to people that want to make use of the new technology that AMD is offering us. 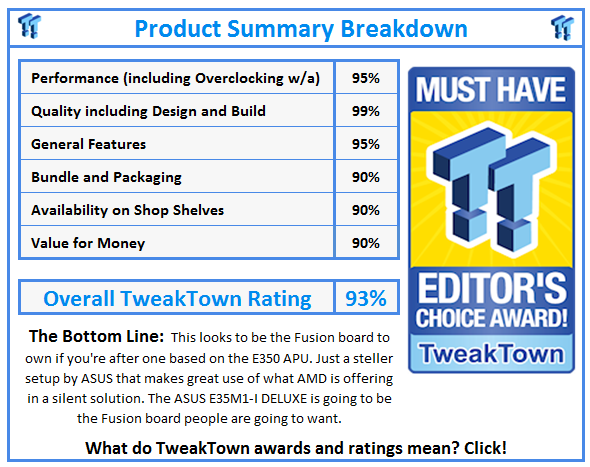