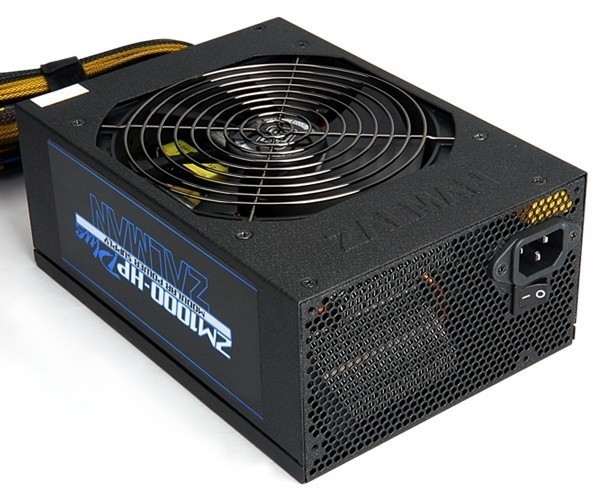 Zalman quickly made a name for themselves in the quiet PC sector years ago and have been somewhat of a pioneer in quiet and efficient cooling. Shortly after grabbing a firm hold of the heatsink and fan market, Zalman went on to produce quiet power supplies and have been quite successful in doing so. Those who seek a quiet yet high powered PC will be interested in the unit on the test bench today, as it offers lots of power with little noise.

The Zalman ZM1000-HP Plus is a quad 12V rail 1000W power supply. It offers up enough power and connectors to run up to three GPU's and some heavy overclocking. Zalman has incorporated their quiet cooling knowledge inside the ZM1000-HP Plus with a large 140mm fan and dual heat pipes inside to increase cooling and reduce noise when under load.

The ZM1000-HP Plus comes with four 12V rails for up to 82A of power combined. It is interesting that not all of the rails are rated for the same output, as is usually seen on multi-rail power supplies. This is due to the load balancing that Zalman does to the individual rails prior to the user connecting anything to the power supply. We will discuss this more when we take a look at the four rails. 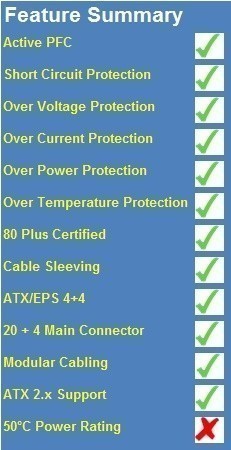 Zalman includes all the current, voltage, power, and temperature protections that you can get in a power supply. The ZM1000-HP Plus features hybrid cable management with a couple of fixed cables and the majority of them being modular. All cables are sleeved and utilize zip ties and heat shrink tubing so that the sleeves don't move around or become unraveled. To ensure compatibility amongst almost all systems, the ZM1000-HP Plus also has a 20+4 pin main connector and an ATX 4+4 connector for those needing EPS12V support. Zalman doesn't list a 50C rating for the ZM1000-HP Plus, but does list its operating temperature for up to 40C. The ZM1000-HP Plus comes with a Silver 80Plus rating for efficiency up to 88%.

Zalman has an MSRP of 269.99 USD on the ZM1000-HP Plus, but Newegg currently has stock available for 239.99 USD. At that price the ZM1000-HP is at the mid to upper end of the PSU pricing level, but as long as this Silver Rated PSU is able to perform at the claimed specifications, then the price is justified. Zalman backs your investment with a 3-year warranty. 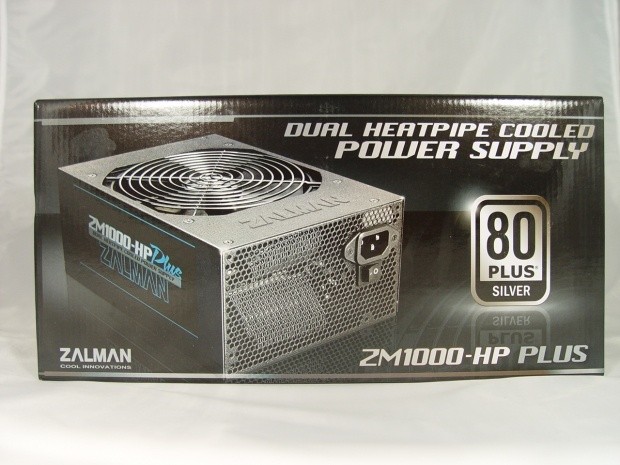 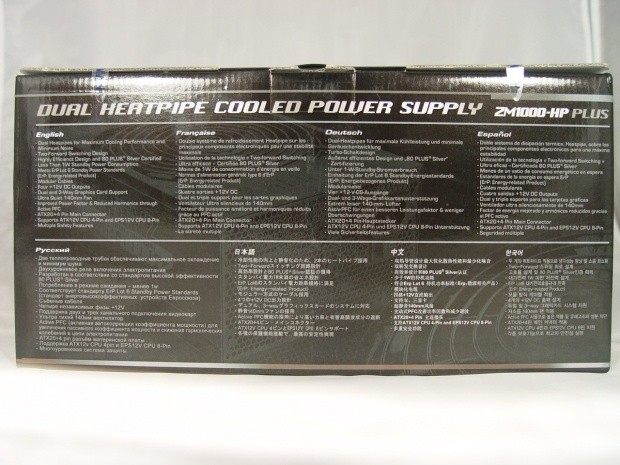 The back of the box continues highlights the features of the ZM1000-HP Plus. 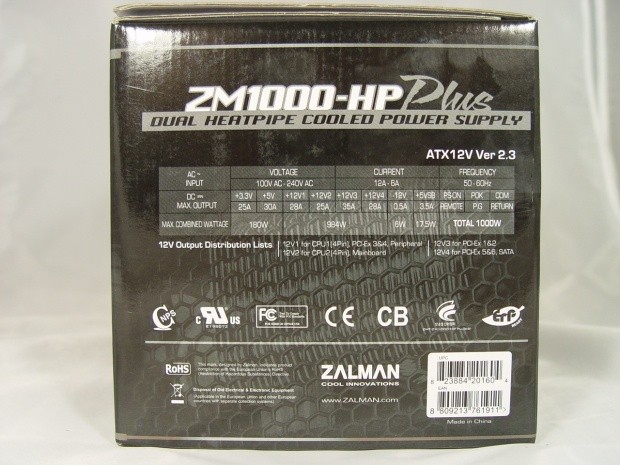 One side of the box displays the I/O specifications for the ZM1000-HP Plus and lists the rail distribution of the power supply. 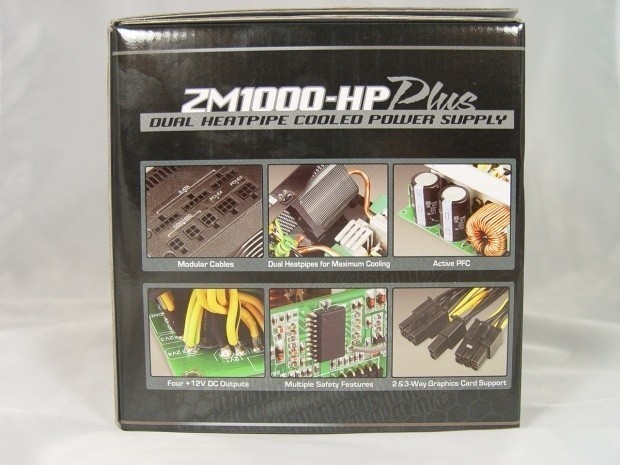 The other side of the box graphically highlights some of the features listed on the back of the box. 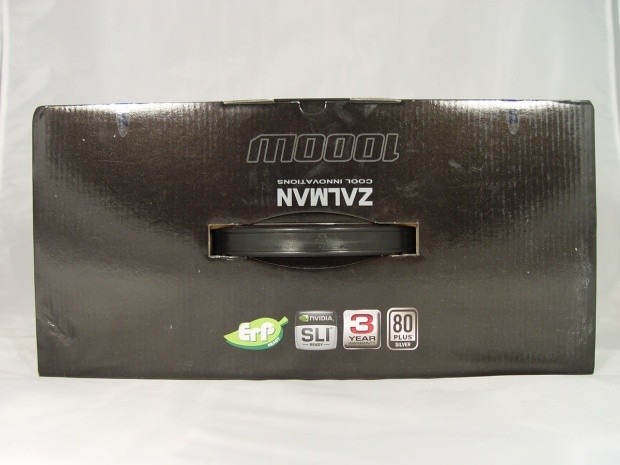 The top of the box lists warranty information, SLI Certification, and more. Zalman also gives the box a handle for easy carrying. 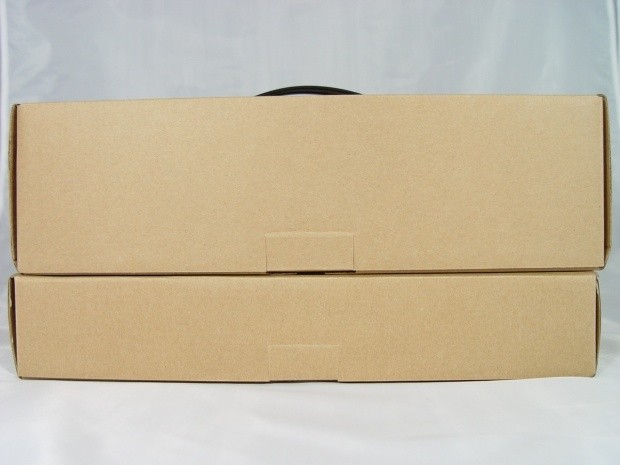 Opening things up, we see that Zalman has two boxes inside the exterior packaging. The top box contains only the power supply and the bottom box is for all modular cables and everything else included. 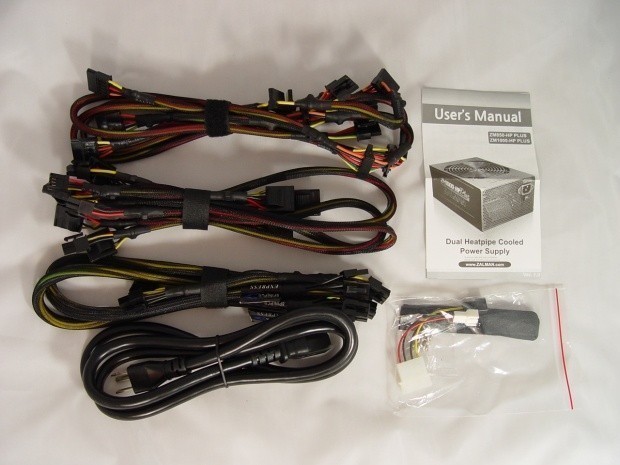 Inside the accessory box we find the modular cables, power cable, user manual, and a bag containing mounting screws, cable ties, and a Molex to dual 3-pin fan adapter. 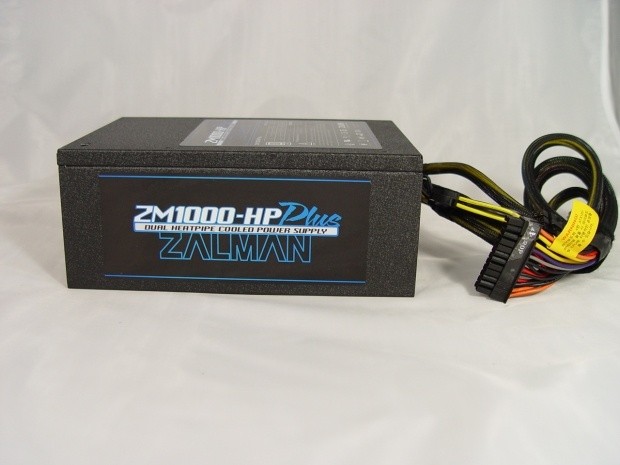 One side of the ZM1000-HP Plus displays a label denoting the PSU. 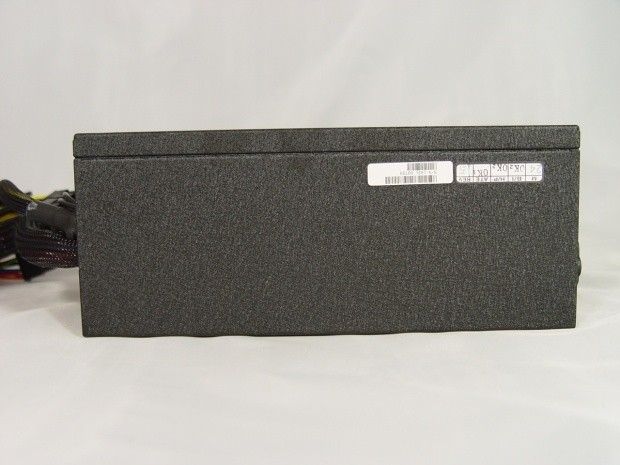 The other side of the PSU shows quality assurance testing and model/serial numbers. 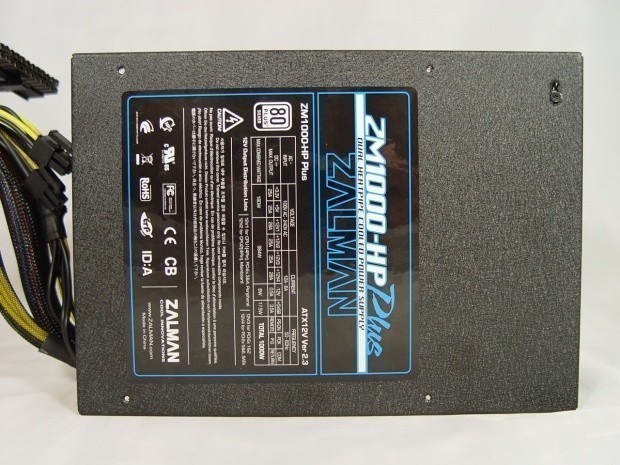 The top of the ZM1000-HP Plus is where you will find the I/O specification label. 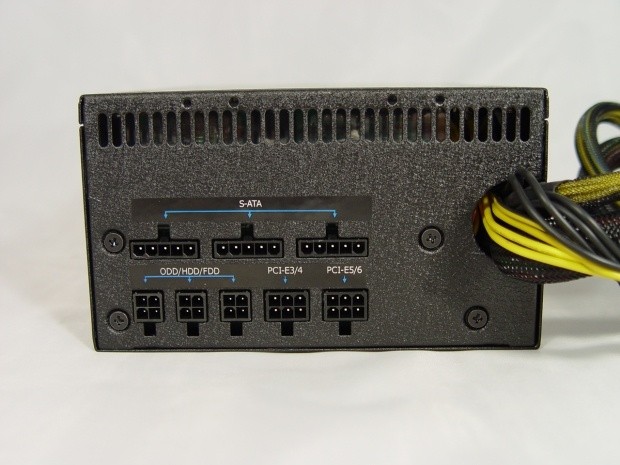 Taking a look at the front of the power supply, we can see the various connections for the modular cables as well as an added vent for increased airflow. 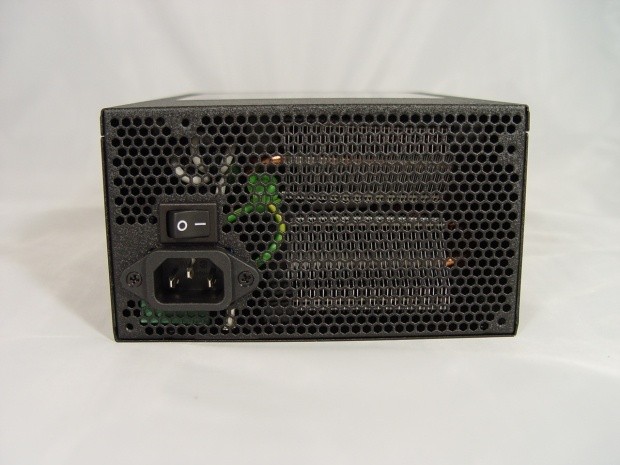 The back utilizes a honeycomb mesh design that enables as much airflow as possible. The only spaces that obstruct airflow are the necessities: mounting holes, power switch, and power input. 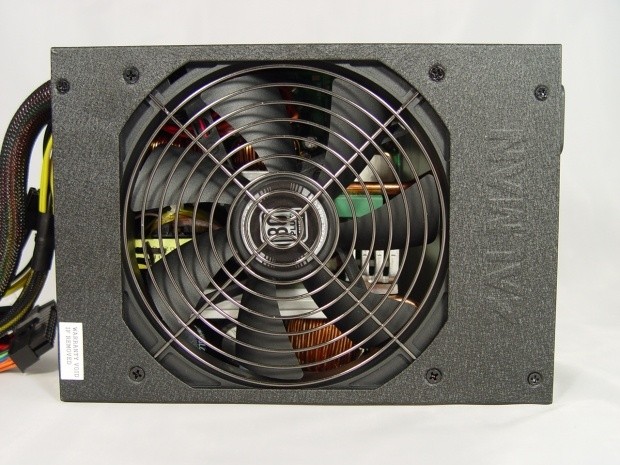 The bottom of the ZM1000-HP shows off the large 140mm dual ball bearing fan and wire mesh grill. 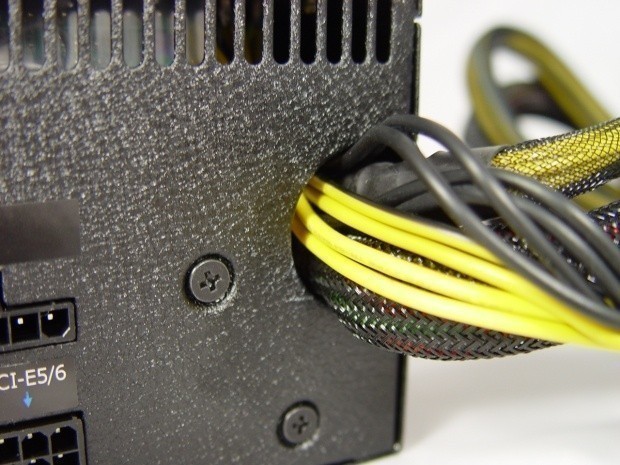 One thing that we noticed was that Zalman didn't use a cable guard/grommet around where the wires exit the power supply. This wouldn't be a huge deal if all of the cable's sleeves started inside the PSU, but they don't. As you can see above, the wires are left to rub on the edge of the PSU housing and could possibly become bare over time.

Zalman makes sure that there are plenty of cables and connectors available to utilize the full 1000W available. On top of the 20+4 main connector and ATX 4+4 connector, they also give you six PCI-E connectors, nine SATA connectors, eight Molex connectors, and a single floppy connector. Only the main, ATX4+4, and one pair of PCI-E connectors are fixed to the power supply, while the rest are modular. It would have been nice to see Zalman incorporate a second EPS12V connector and it makes much sense to do so, as this power supply is squarely aimed at the high end market where it would be utilized.

As mentioned earlier, the ZM1000-HP Plus uses a somewhat unconventional layout for the rail distribution. For the first rail we can see that it powers a single PCI-E cable with multiple connectors, half of the ATX4+4 connector, and all of the Molex connections. The second rail powers the other half of the ATX 4+4 connector and the motherboard. 12V3 is powering just a single cable for PCI-E connectors, while the fourth and final rail powers yet another cable for PCI-E connections and all of the SATA connections.

What makes this even more perplexing is that the maximum loads for each rail doesn't necessarily match the loads that you would expect each rail to reach. 12V3 is rated for 35A and is the strongest rail of the ZM1000-HP Plus, yet it has the least ability to load down the full 35A. 12V1 is only rated for 28A but has the highest potential of drawing the most power.

This still provides a nice compromise of load balancing without the user even being aware of it. Just utilizing the three fixed cables puts a load on three of the 12V rails. If any SATA devices are added, the fourth rail gets some load placed on it as well. 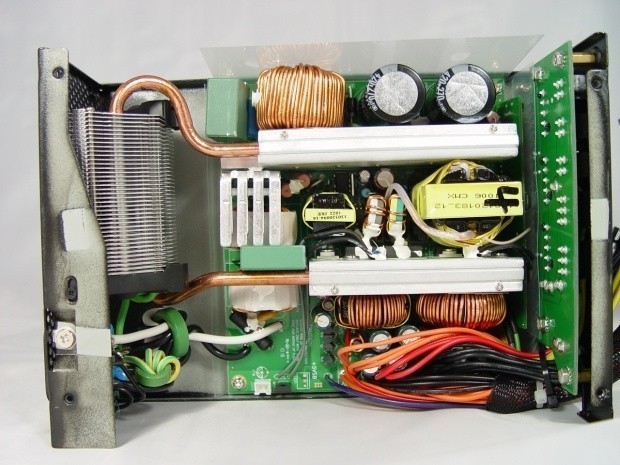 Opening up the power supply, we finally get a look at the layout and the dual heat pipes that the ZM1000-HP Plus boasts. 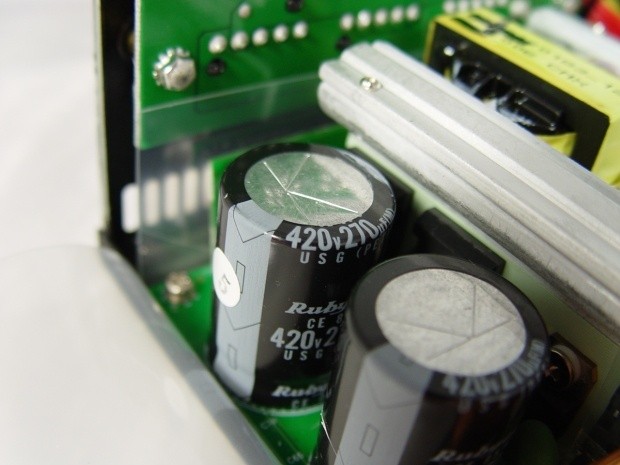 Taking a look on the primary side of the power supply, we see two large Japanese made Rubycon capacitors. 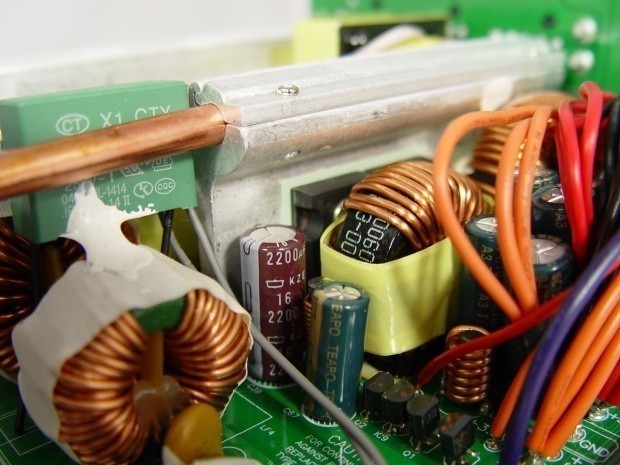 The secondary side doesn't quite boast the same quality capacitors that the primary does. Here we see a mix of Japanese made Nippon Chemi-con capacitors mixed in with Taiwanese Teapo caps. 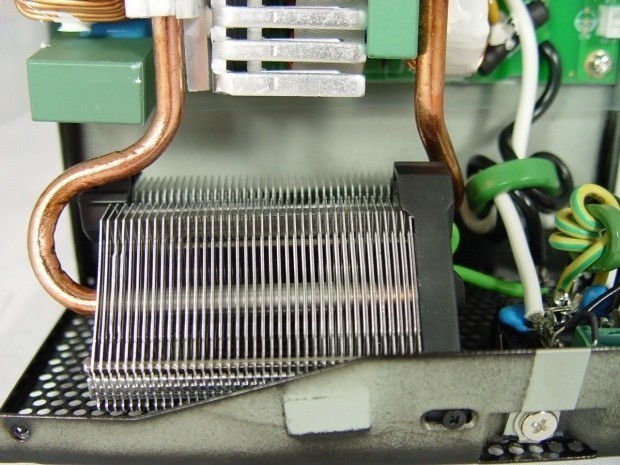 The dual heat pipes in the ZM1000-HP Plus move the heat to a pair of heatsinks at the very back of the power supply.

The tests performed are based around six conceivable setups that are out there and progressively load down the PSU up to the power supply's limits or 1000W, whichever comes first. Since our test equipment's limits are equal to that of the Zalman ZM1000-HP Plus, we can test it to the maximum.

Zalman's ZM1000-HP Plus performs excellent throughout all of our tests. All of the rails show minimal changes in voltages and never even come close to falling outside of the ATX specifications. Efficiency was also spot on for the 80Plus Silver rating on the power supply. Zalman has also managed to keep the ripple down on the 12V rail. Even under full load, the ZM1000-HP Plus only measured 28mV peak to peak.

The dual heat pipe design combined with the 140mm fan kept the Zalman ZM1000-HP whisper quiet through all of the tests as well and could barely be heard. It wasn't until the power supply reached the third test that the fan even became audible which is approximately 56% load. The fan noise remained the same throughout the rest of the tests.

Zalman has produced a very solid power supply with the ZM1000-HP Plus. It performed very well in our load tests and one simply can't ask for a power supply to perform much better. Zalman's inclusion of dual heat pipes to cool the power supply coupled with a large 140mm fan to dissipate the heat and provide fresh air is fantastic. It keeps the power supply nearly silent even under load and makes it ideal for those seeking silent powerhouses.

Zalman could still do several things to improve the quality and value of the unit. The price is quite steep for a 1000W power supply. There are many others out there that offer nearly the same output performance wise for much less, but aren't quite as silent. Not utilizing a grommet as the wires come out of the power supply is something that I have only seen in a handful of power supplies over the last five years or more, and never in such a high end unit. The warranty on the ZM1000-HP is also a bit short, especially when looking at the offerings of other high end power supplies available.