Ever since QNAP released their TS-509 Pro Turbo NAS, they have been sitting at the top of the mountain looking down. Thecus responded with the N7700 and was able to close the performance gap and feature set, but the TS-509 was still ahead of the game. Not looking to rest, QNAP has countered Thecus' latest offerings with their own newly improved line-up that is now capable of being limited by Ethernet. The new QNAP TS-809 Pro Turbo NAS is so fast that your Ethernet cable used to connect the NAS to your network is now the limiting factor.

QNAP also made great strides in user management, an area that can always be made more user friendly until we reach automatic setup based on what a user is thinking. Since reading a person's thoughts is still not possible, QNAP has come up with the next best solution. The new AJAX interface that QNAP released with the latest round of firmware updates is the most advanced NAS interface we have tested to date and today we will have a look at just how easy it is to setup QNAP NAS servers with it.

Of course, the new TS-809 Pro is full of bells and whistles. The list has been improved upon since we reviewed the TS-509 Pro. It isn't even fair to just call the TS-809 Pro a NAS server. Total Server, Everything-You-Will-Ever-Need Server, Life Server or The-Only-Server-You-Will-Ever-Need describes the system better than NAS Server.

It's not surprising that this total approach comes with a high cost, but at 1699.00 USD the TS-809 Pro Turbo NAS is much cheaper than I expected for a SMB / Enterprise product with so many features and this level of speed. Let's take a look and see what is under the hood. 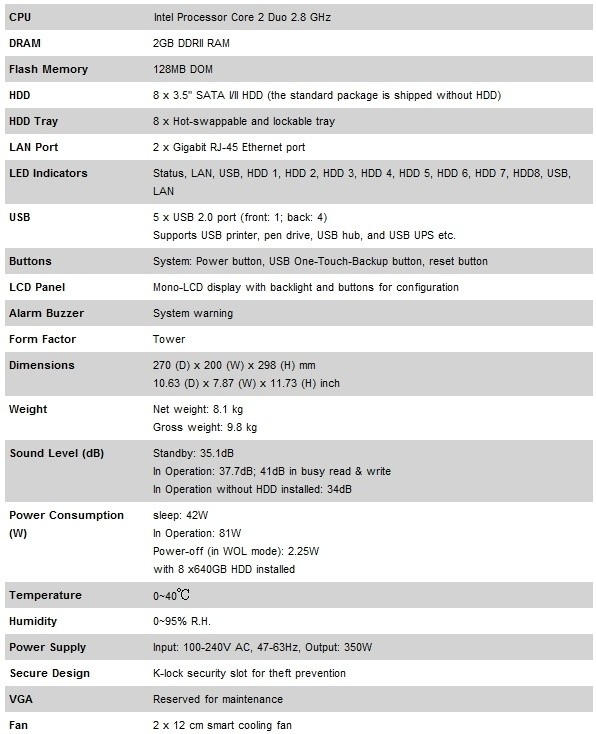 Honestly, if we could just put a GeForce in the NAS we would have a very capable gaming system. The TS-809 Pro uses a Core 2 Duo running at 2.8GHz. In the hardware world we would consider this an E7400. This high level of processing power gives the NAS blazing fast speed and makes it capable of being able to run application after application without the need to turn features off. The 2GB of RAM that is included with the base system is also hearty enough to run applications and have enough in reserve to aid in RAID 5 and RAID 6 write operations.

The 128MB Flash Memory is essentially a solid state drive that holds the operating system and boots the TS-809 Pro Turbo NAS very quickly. When it comes to storage the NAS houses eight SATA HDDs with a capacity of up to 2GB each. That leaves us with 16GB of data storage in RAID 0, but RAID 5 or RAID 6 would be more useful for the target audience and as we will see later in the review there is no performance penalty for using advanced RAID arrays.

With Cap and Trade on the horizon here in the U.S. businesses and home users alike are starting to worry more about power consumption. The TS-809 only uses 41 watts when sleeping and that number doubles when in operation mode. This is much less than a single PC.

The NAS has a small footprint that we will look at in detail later in this article. A rack mount model is also available, called the TS-809U-RP.

As we stated in the Introduction, the TS-809 Pro Turbo NAS is a one stop shop for all of your needs. Very few companies will make use of the full feature set, but it is possible to use the TS-809 to its full ability. The truth is that even a company with hundreds of users using the TS-809 would be able to use a single unit and all of their needs would be met.

There was one feature that I was unable to access with the TS-809 Pro and that was Jumbo Frames. Most likely a future firmware update will take care of this issue, but for now you are limited to 1500 MTU. Since the TS-809 Pro gave us the fastest file transfer speeds we have recorded to date, it wasn't really an issue. 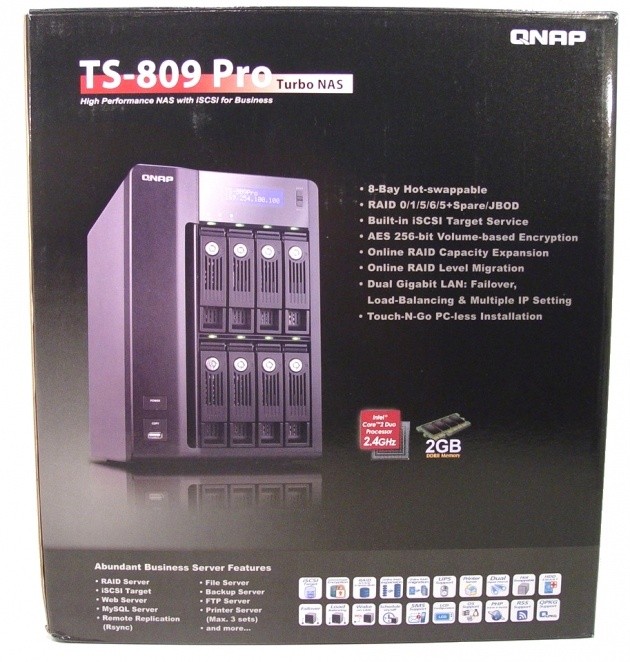 I love the image on the front of the box; it makes the NAS look tall and mighty. QNAP also chose to put the processor and memory information on the package. At the bottom some of the uses and features are listed as well. 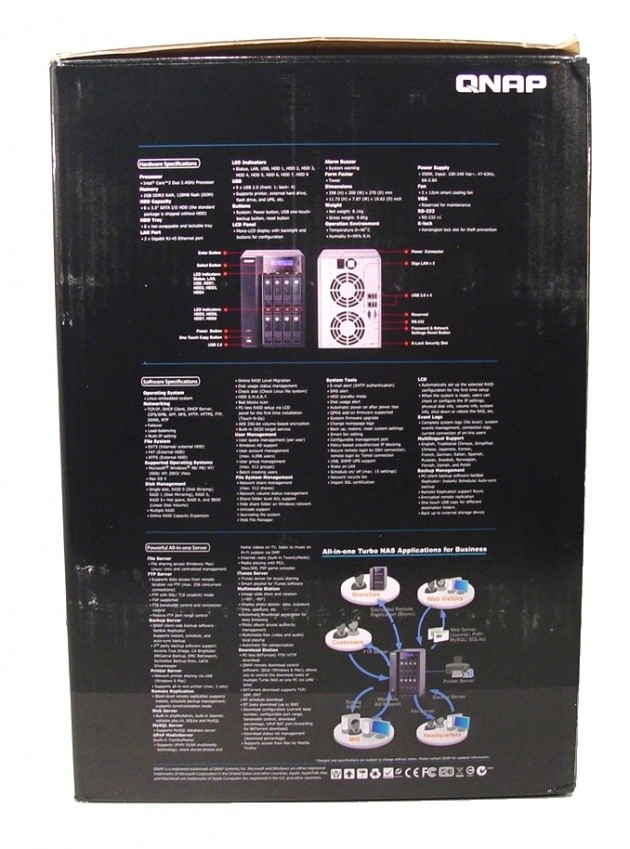 The hardware specifications are listed on the side of the package. 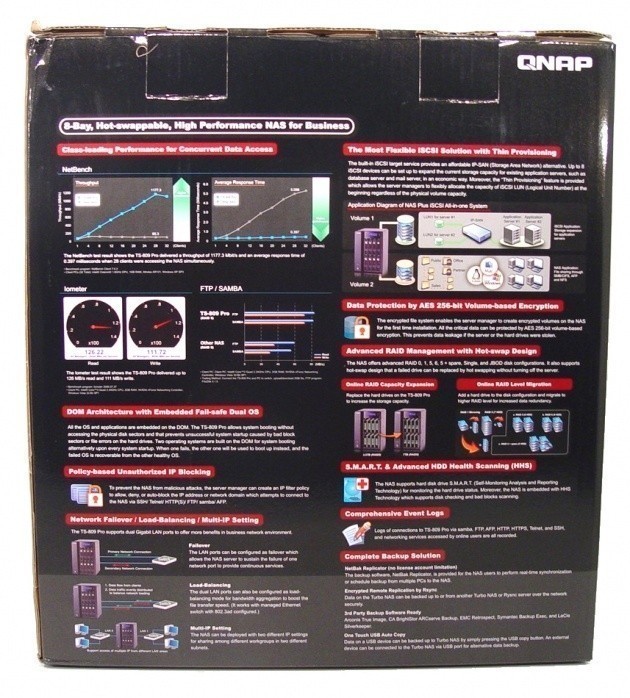 A list of typical usage scenarios are listed on the back of the package. 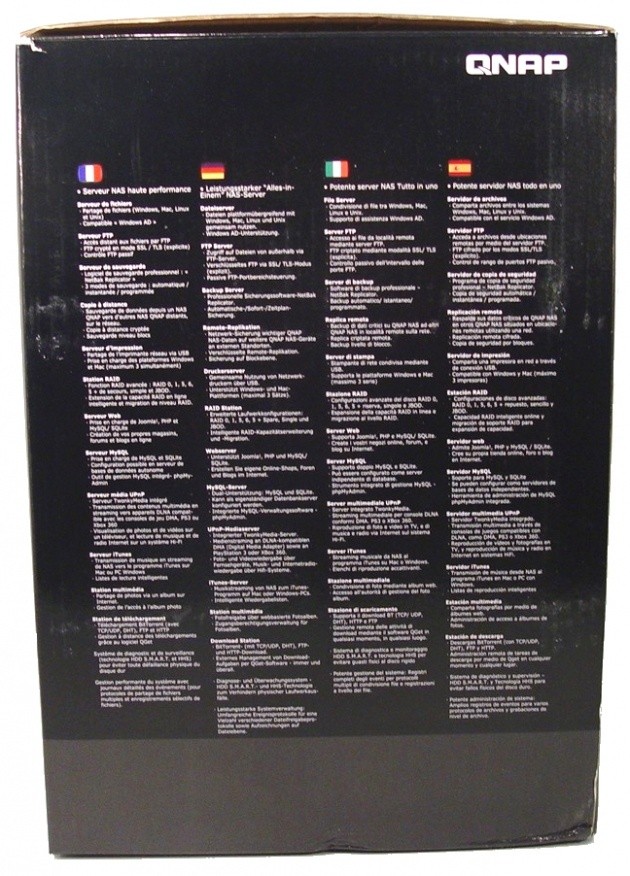 More information is given on the other side of the package that is targeted for an international audience. 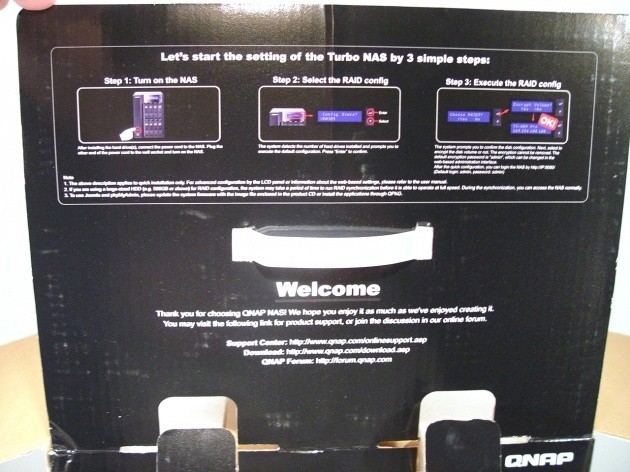 When opening up the package I found a very useful step-by-step guide to getting started. 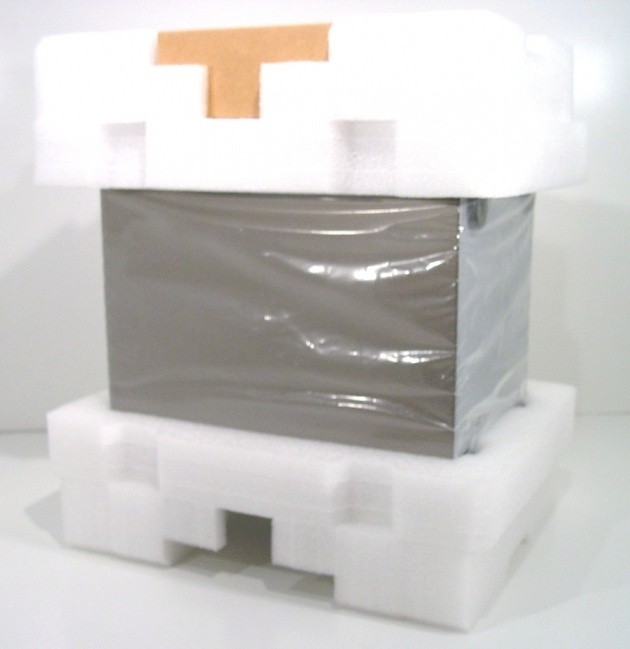 The inner packaging for the TTS-809 Pro Turbo NAS is well thought out. Here we see that the unit is protected all the way around and the accessories are in a brown box that sits in a recessed area at the top. 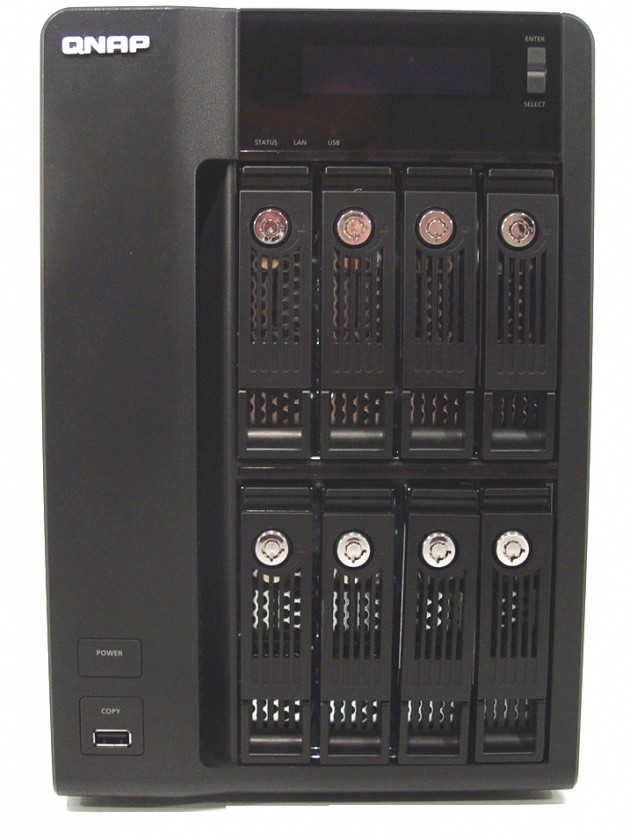 NAS servers seem to be getting new feature sets with every firmware release, but the interface gets more user friendly with each hardware release. Here we see the simple layout. The power button is at the bottom left just above the USB port that has a very convenient copy function. Just plug in your USB device and hit the copy button and the data is transferred to the NAS.

The TS-809 Pro has a useful display at the top and a pair of buttons that allow some of the basic operating perimeters to be changed without the need for a workstation. 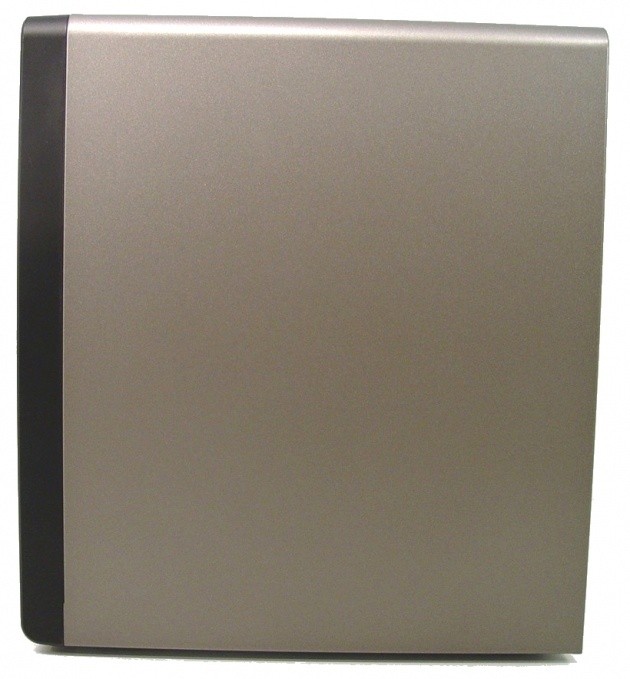 The cover for the TS-809 Pro is in a U shape and has a scratch resistant coating. 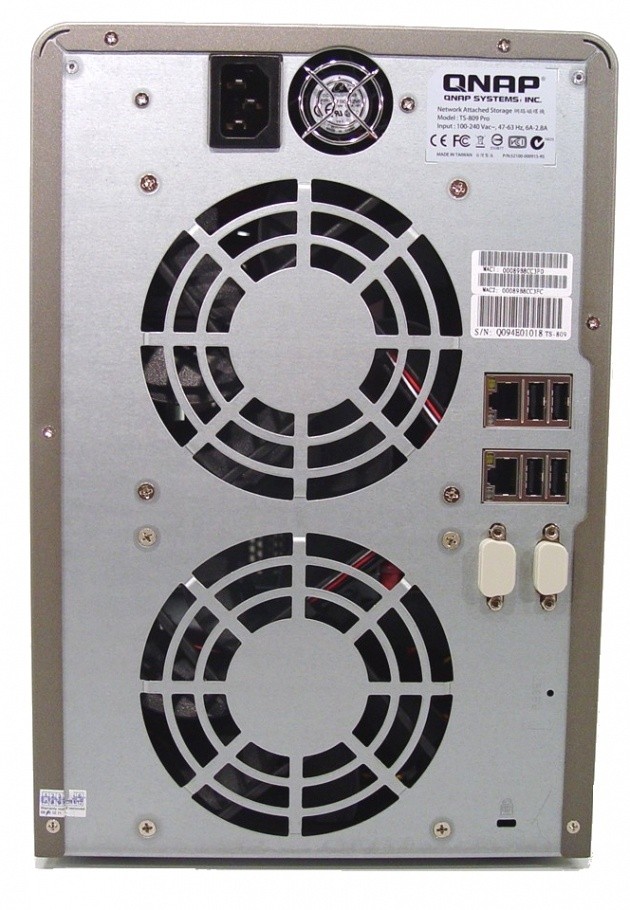 The back side of the NAS is designed very well also. Here we see the PSU is located at the top of the unit and this is where you plug the power cable in. Two Gigabit Ethernet ports are available. You can use the TS-809 Pro on two different domains or use the Failover feature as well as load-balancing.

Four USB ports are also on the TS-809 Pro. These are used to install printers, making the unit a versatile print server. Also, most battery backup units use USB to talk to the NAS for status updates and to turn the NAS off before battery power fails. 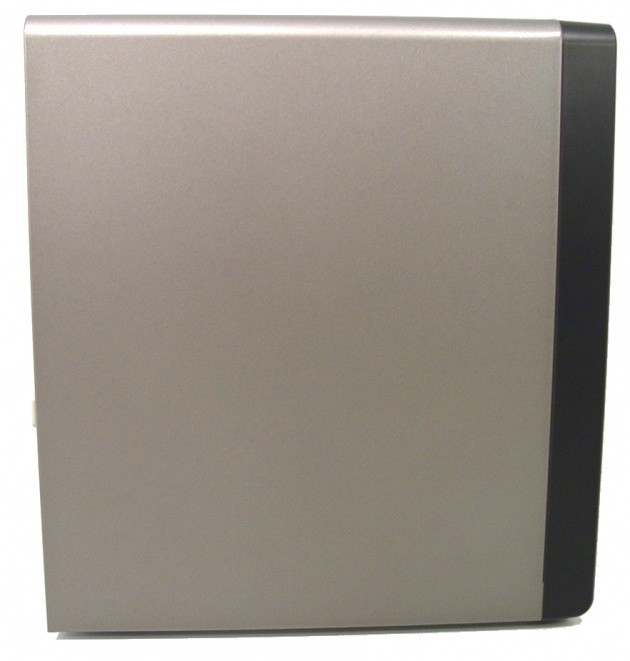 The other side of the NAS is like the first. 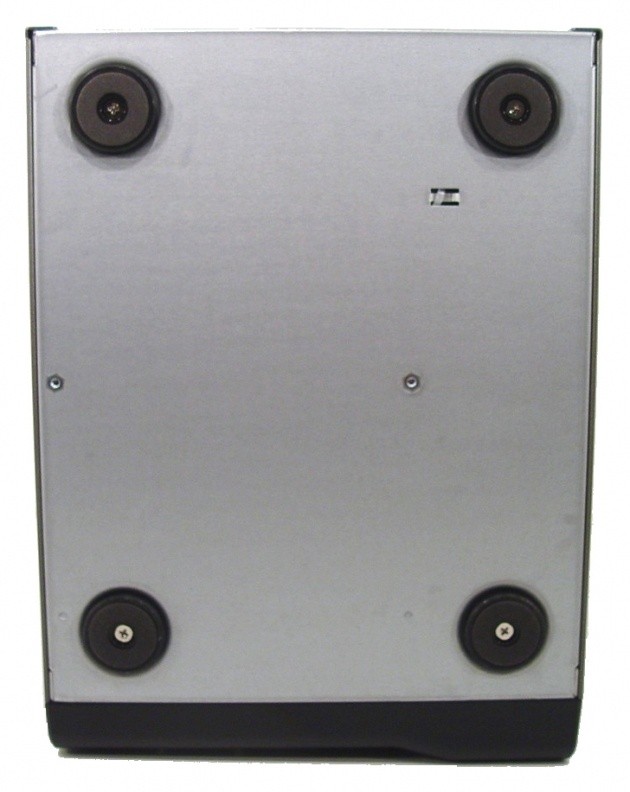 Rubber isolation feet keep the unit from transferring vibration to the desk. 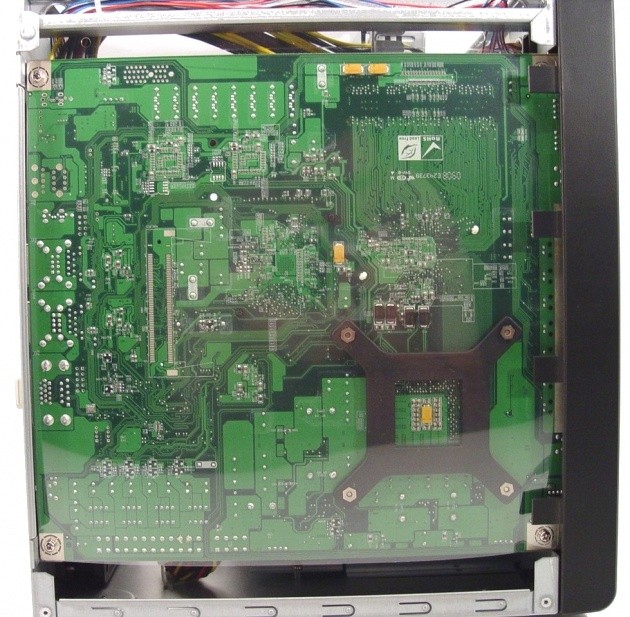 With the side off we see that TS-809 Pro is more PC like than a typical NAS server is. 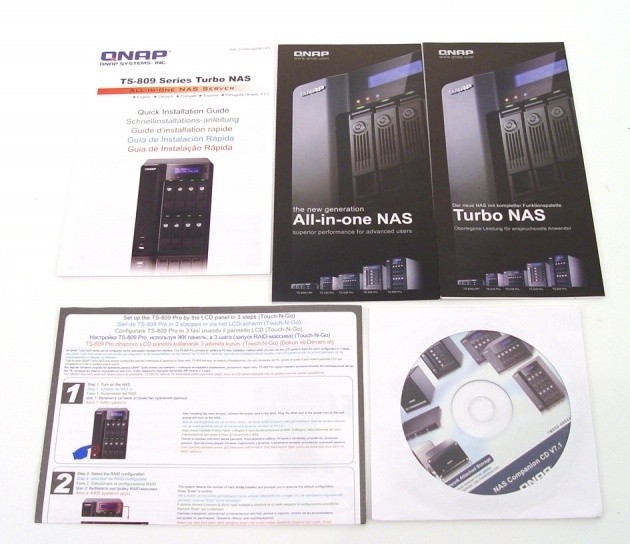 The QNAP TS-809 Pro comes with an impressive amount of documentation. A software disk is also included with the needed tools to access the NAS easily. 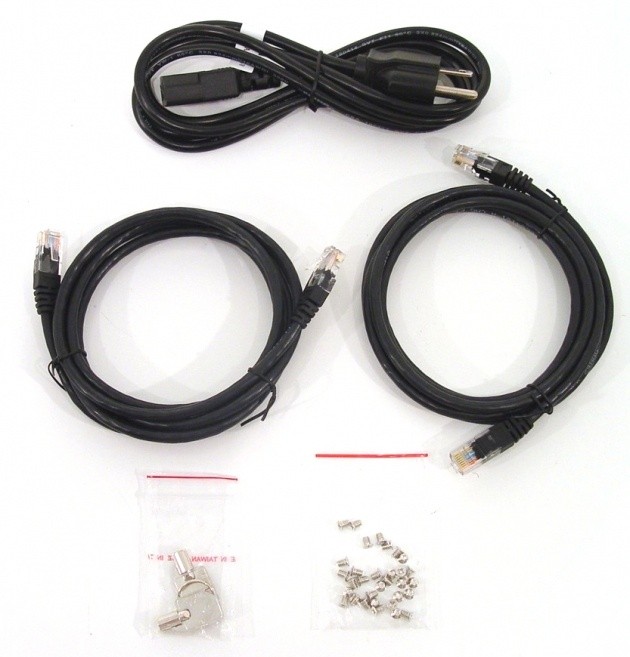 A power cord, two Ethernet cables, two sets of keys and the screws needed to mount the drives are also included. 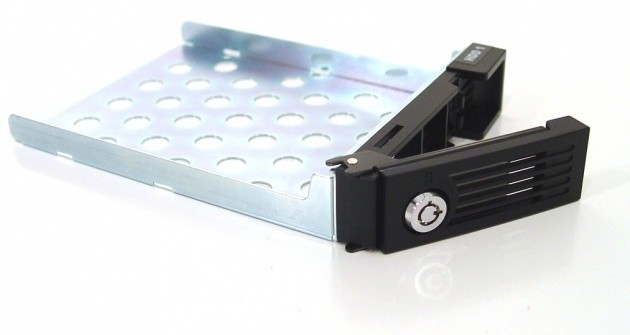 The drive cages are made of steel and well thought out. Each cage has a lock and when used the drive can't be removed from the NAS.

QNAP really made showing the new software interface very easy to discuss this time around. The video below goes through the new V3 interface that runs on AJAX.

The new interface is very slick! Ease of use is increased and you can now use all of the features without feeling like you just walked into a maze.

Here we see that the QNAP TS-809 Pro Turbo NAS is faster than the Thecus N7700 in nearly all tests and configurations. When bouncing back and forth between the two benchmark graphs you can really see that the QNAP graph fattens up quite a bit.

Here things get a little closer and the Thecus N7700 even gets to take the lead in a few tests. When the N7700 was tested we were able to enable Jumbo Frames, but the TS-809 Pro didn't have a way to change this option and that could play a role in the results.

Here we see the two flagship NAS servers really battling it out and going back and forth between benchmarks.

Yet another epic battle here. The QNAP TS-809 Pro blows the Thecus away when it comes to the restore feature, but backup goes to the N7700.

Anytime you are able to get over 100 MB/s transfer speed over Ethernet you are really flying. The QNAP TS-809 Pro Turbo NAS is able to achieve this magic number in several of our tests and more times than the closest competitors leading product, the Thecus N7700 Pro.

When comparing the two flagship products side-by-side the QNAP wins many of the categories; data transfer performance, interface ease of use, capacity (8 drives verses 7 with the N7700), features and hardware specifications. One area that is going to hurt QNAP in this battle is the cost. The QNAP TS-809 Pro Turbo NAS costs 1699 USD, but the Thecus N7700 is only 939.99 USD. Newegg carries both. Obviously the QNAP has a large advantage over the Thecus, as mentioned earlier, but the price difference may be hard to swallow for some when compared to the competition. I do have to admit that the TS-809 TS is a bargain when compared to similar NAS servers from other manufacturers.

The improved specs for the TS-809 Pro as well as the price makes it well suited for larger user groups. The 4GB of memory that comes installed in the unit from the factory makes the TS-809 run smoother in these large user groups and the N7700's 1GB would obviously reach a wall sooner.