The last time I had the pleasure of dealing with GELID Solutions was when they asked me to have a look at their Silent Spirit CPU cooler back in January. At that time GELID was nice enough to send along a tube of GC-1 along with it. Our testing requires the use of AS-5, the "industry standard" recommended TIM. So with that I was left to test the GC-1 in everyday uses on my main and secondary PC's.

Time goes by and just about every heatsink I removed for maintenance or heatsink replacement eventually got the GC-1 treatment for a few reasons. Once I used it I saw a drop in temperatures over my previous TIM. Second, the paste is non-curing, so there isn't the set-in time required to "wait and see" if it is any better. Last and most important, is the fact it is non-conductive. This keeps accidental mishaps from over application of the compound whereby shorting out may occur if the compound oozes from under the heatsink.

Today GELID ups the bar and introduces GC-2 Premium Thermal Compound. During the production of the compound I was privy to an early sample for pre-release testing. At that point GELID was looking for a statement based on these tests, which was to be shown on the product packaging for the retail version. I am already well aware of the potential of GC-2, but here I am with the retail version, about to spread the knowledge.

Going through the bullet points, the specific gravity of the GC-2 means it is 2.8 times denser than water. The rest of the specifications and features listed are something that not all TIM manufacturers offer. Non-conductivity is a big thing to look for in any compound choice, as it keeps accidental electrical transfers from happening if the compound gets onto charged components. On top of that, GC-2 is both non-corrosive and non-bleeding, the first of which means that you won't have the compound "eating" into any of the metal surfaces. The second means as it heats up, the TIM shouldn't "melt" from under the heatsink. The non-curing aspect is also a plus, as you get immediate "real time" results with GC-2. GELID doesn't make you wait up to 200 hours for the TIM to "set-in". All those things in mind, GELID is still able to make a compound that is easy on the user to apply and in its uses for all your TIM needs.

GC-2 Premium Thermal Compound is still very fresh in the release and is obtainable, but at an obscure e-tailer at this time. Since it is so fresh to the market, a bit of time is needed for GELID to get GC-2 on the more regularly shopped spots. If you have to have it, you can find it, but I always suggest getting TIM with another purchase to help offset the shipping cost.

I was only able to find one e-tailer listing the compound other than an e-bay listing. This lone retailer is FeppaSpot.com and as you can see the price is right smack in the middle of competitive. The suggested retail from GELID was supposed to be $7 for a 7 gram tube, but as you can see from the link it is being offered for a bit less. Pricing themselves at or below the competition I am about to test, this is not only good business, but if the compound is better it's a major win for potential users.

GELID packages its GC-2 Premium Thermal Compound in a clear plastic package. The packaging allows a clear view of both the product, included spreader and the text and imaging. Inside is a cardboard backer to show this compounds specifications and features on a familiar black and white background, highlighted with their lime green accents. As I mentioned, a member of Driver Heaven and myself sent in awards from our experiences with the pre-released samples and these awards are showcased at the bottom right corner.

The rear of this cardboard insert is where GELID explains a bit about their thermal compound. Under this brief explanation are the quotes submitted by Driver Heaven and myself that back the awards we presented for use on the front.

After a bit of trimming with scissors to open the packaging, it released the GC-2 and the spreader GELID has included to aid with the application. The GC-2 comes in a syringe with a black sticker with little GELIDs in grey text. This makes for a nice backdrop for the bold yellow GC-2 labeling. Just in case you forget who sends compound with a spreader, GELID appropriately reminds you with a logo graphic there as well.

Even under the hot lights of my testing box, the GC-2 stands tall with the peak not faltering under the halogen bulbs. The GC-2 is a thicker than usual compound that doesn't do to well under the normal "finger spread method", as it tends to stick more to your finger than the chip of choice you are using it with.

My guess is that the main reason behind GELID sending a plastic spreader is to keep most of the TIM where you want it, versus the end of your finger.

After about eight or nine passes with the spreader, the GC-2 will level out a bit. Just keep leveling it off and you can always scrape excess away if you over apply the first time out. Notice how little of the GC-2 is left behind on the spreader; I wasted a bunch more trying to spread it with my finger.

First in line for the line-up of compounds is from Zalman. This is their ZM-STG2 "Super Thermal Grease". It has been around since some time in 2006 and retails for just under $10 U.S. at Newegg.

Next up we have MX-2 High Performance Thermal Compound from Arctic Cooling. This compound has been around for a while as well and rings in at the register at around $8 U.S.

When I did the coolers for Noctua, they also supplied me with a sample of their own TIM with this tube of NT-H1.

This is a TIM that needs no real introduction. AS-5 is almost the industry standard and is what I see recommended most in the forums. AS-5 has been around for what seems like forever and is what we use exclusively in our T.E.C.C. CPU cooler testing.

With the testing methodology out of the way, I can show you a few shots done for example purposes. I tried various methods of application to each of the TIMs in the competition and benched them all with these various methods and took the best result of the three runs of testing. The images you are about to see are sample photos taken by placing the CPU in a motherboard and clamping the cooler into place. Once I allowed it to settle into place, the cooler was removed and you will soon see the results of each method.

With a bit more practice and a better feel for the spreader, it is fairly easy to get a good result of a thin even layer on the desired heat source. This is the preferred application method from GELID and you will soon see why.

The spread of GC-2 is even and has great coverage of the HIS. This in turn makes great contact between your heat source and the heatsink.

Then the next application method was the "grain of rice in the center" method. We have all used this method and with varying results with various coolers.

The grain of rice method is flawed with HDT style coolers. The compound gets taken up by the gaps in the heatsink base and doesn't allow the compound to spread over the entire IHS.

Here is my personal preferred method of applying thermal compound. It is an adaptation of the grain of rice method, which I have seen fail on my Xigmatek coolers. The addition of the TIM on the outer corners goes a long way for HDT coolers, where the flat based coolers do tend to work better with less.

With my personal method you can see I get just about equal coverage to the IHS as the spreading out of the compound creates. Again, this is more for the coolers with exposed heatpipes in their bases.

The results are of no surprise to me, as I have had a sneak peak at it weeks ago. As I mentioned, each application was tried on our T.E.C.C, test rig and I took the lowest round of test scores and used them in the list. Some compounds did better with globs, while some did better with spreading them, but as you can see, even with three rounds a piece GELIDs GC-2 Premium Thermal Compound is top of the charts.

I usually don't start off my final thoughts with an image, but I found this image to be very fitting, with the GELID GC-2 standing tall amongst its competition. GC-2 has been a pleasure to work with for testing, as the results are superior to the others and it is still easy to apply and clean up when needed.

Out of sheer laziness, I have only one small thing that isn't really a complaint as much as it is just odd. Most compounds I have used to date spread averagely well with a naked finger and a bit of spreading it around. With the GC-2 I found it to clump and collect on the end of my finger, leaving just a film on the IHS of the processor. Of course, GELID ships the spreader to alleviate this issue, but I know many others use their fingers to get the job done quickly. As the saying goes, good things come to those who wait. So take your time with the application and your efforts will be rewarded.

The results stand for themselves. I mean, what else can I say? GELID's GC-2 handled the competition and was ready to keep cooling. With a suggested price of around $7 it puts others tested in their place. Some of our test samples are more expensive and with TIM you don't always get what you pay for. When the TIM you currently own runs dry, I highly suggest you try a tube of GC-2, you won't be disappointed. 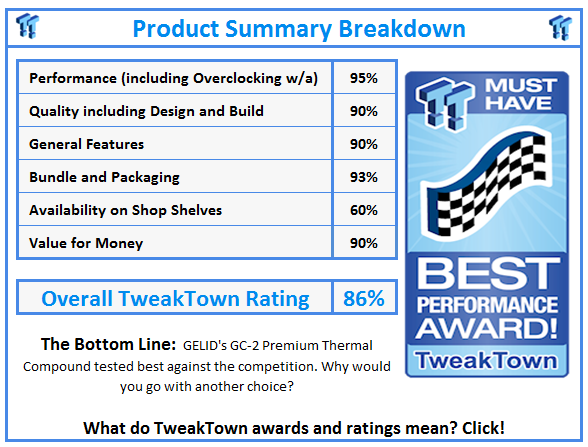