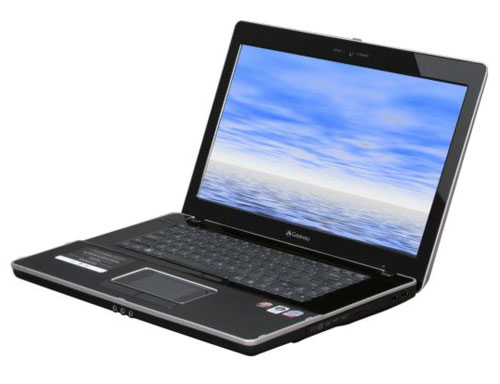 When it comes to notebooks there are a few general classifications of systems. You have gaming notebooks (like the recently reviewed Alienware Area-51 m15x), netbooks, multimedia machines and basic notebooks as a few of the gross category types.

The Gateway MD series offers several models to choose from and while each of them look the same, they offer different hardware inside. The particular model I am reviewing in the series is available at a variety of retailers. Gateway's MSRP for the machine is $999, but Newegg has the machine from $849.99 U.S. Dollars. 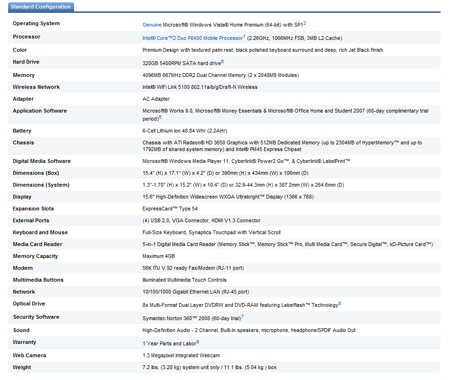 The MD7826u I am reviewing today has the following specifications:

It's important to note before we get into the meat of the review, that my review sample was an early production and a few minor specifications were different on my unit. My review unit is burgundy in color; the model is only available in black now. My test machine also features Bluetooth, which did not make it to the final production system.

Gateway packs all of its notebooks in the same basic box. Gone are the days when a box looking like a cow showed up on your door. Today you get a plain white box with the gateway logo.

Inside the box is the laptop packed in a protective bag swathed in shock absorbing foam. The packaging is good enough to keep the notebook safe during delivery and offers no more. Honestly, what do you really need in a box other than a working laptop?

Here you see the little inner box that has the AC adapter and battery packed inside.

After opening the no-frills box and pulling the Gateway MD7826u from its foam cocoon, I got my first look at the Gateway MD7826u. As I mentioned before, the test notebook I was sent is in a burgundy color that the final version isn't available in. All I can say is that the burgundy hue is very nice looking. It's too bad that black is the only option the final product comes in. The burgundy is glossy and has a metallic base that looks very nice. I can only assume that the black final version looks as good as my test sample. 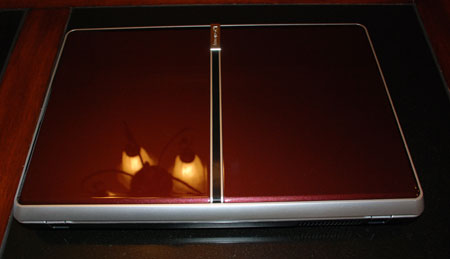 The right side of the Gateway MD7826u is dominated by the optical drive and a pair of USB ports.

Moving to the left side of the machine, you find the HDMI out port, memory card reader, two more USB ports, VGA out, Ethernet port, modem port and an ExpressCard slot. The power port and security lock port are also on this side.

The rear of the Gateway MD7826u is blank except for a large right side grate to let hot air out.

The front edge of the machine has several indicator lights, a pair of headphone jacks and a single microphone jack. The dual headphone jacks make sharing a movie with a friend easy to do in private.

Once you open the glossy lid, you get your first glimpse at the brushed aluminum looking wrist rest area (which appears to be textured plastic), large track pad, full-size keyboard and the touch sensitive backlit controls for media functions. 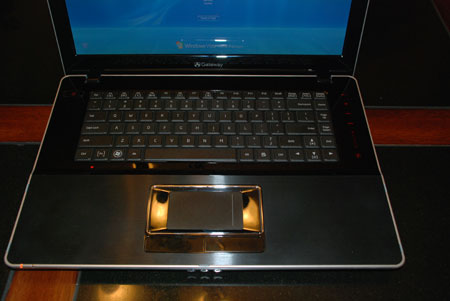 As you can see in this image, the glossy screen is prone to showing reflections in bright rooms.

The Gateway MD7826u isn't a high-end gaming notebook so you don't get all the fancy little accessories that drive the price up and make you feel like part of some exclusive club. My test unit came with nothing other than the notebook. There were no recovery discs or other accessories included, you simply get the notebook and the AC adapter.

Boot Up and Shutdown Times

The next test up for the notebook was with PC Mark Vantage. PCMark Vantage is a newer benchmark for Windows Vista machines that simulates a variety of different usage scenarios your typical notebook user would do with their computer. This benchmark gives an easy to compare number for a computers overall performance. Check out the results of the benchmark for the Gateway MD7826u below.

WinRAR is a popular program for compressing files and folders to save disk space and make them easier to email. The application has a benchmark that tests the overall system performance for the common task of compressing files. Check the results in the image below. 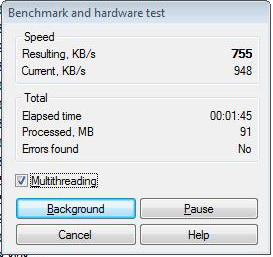 The next benchmark up is EVEREST Cache and Memory. This test shows how well the memory and processor cache subsystems in the Gateway MD7826u perform. Check the results in the image below. 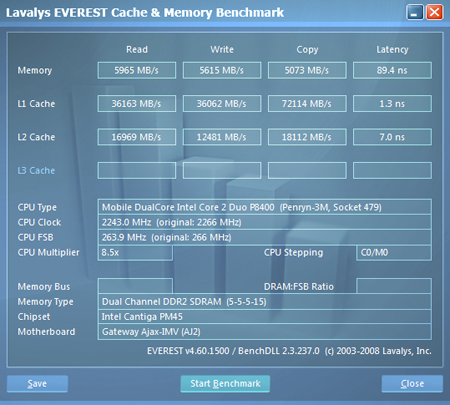 Passmark includes a number of benchmarks in its test suite to give various parts of a computer a workout. This particular test gives us an idea of how well the CPU in the system performs. The Intel P8400 2.26GHz CPU in this test machine works very well for a notebook part. Check the full results below. 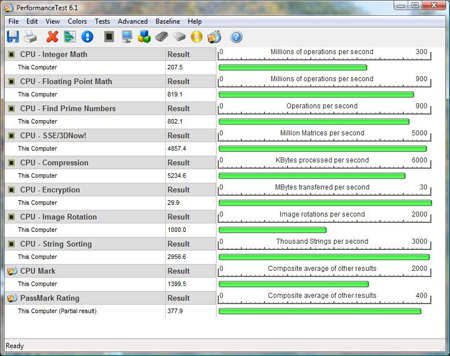 This series of four separate tests puts different types of workloads on the hard drive of the Gateway MD7826u to see how well it works in different usage scenarios and under different load types. The four tests are detailed in the screen shots below. 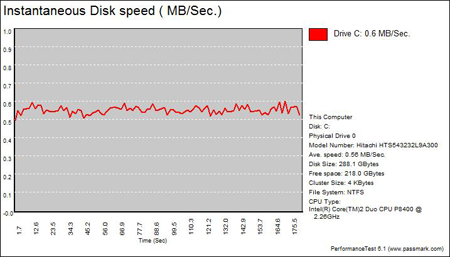 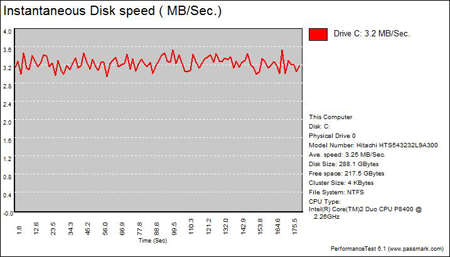 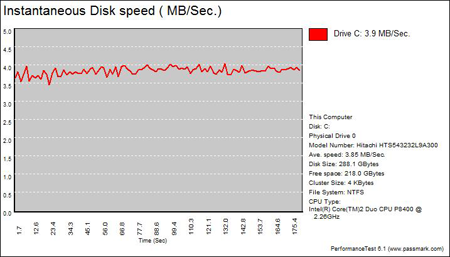 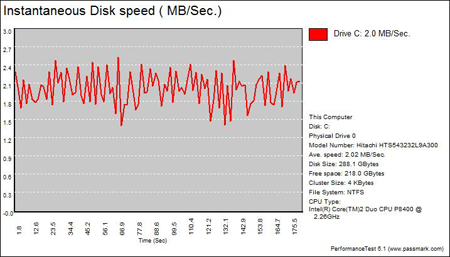 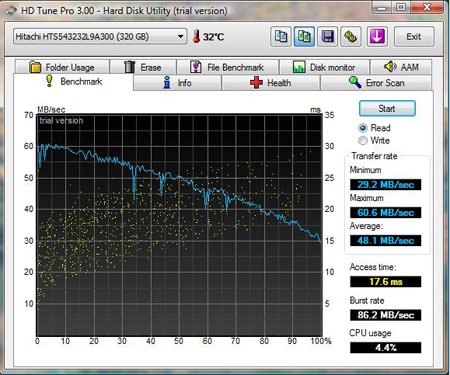 This benchmark looks at the average access times for the hard drive inside the Gateway MD7826u and the read access benchmark results are below. 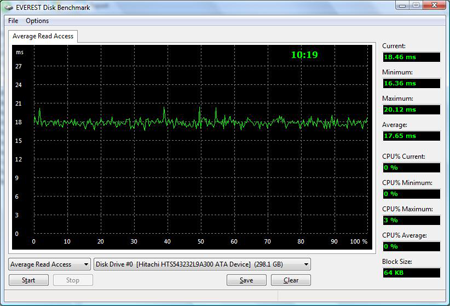 Quickpar is a Windows program that creates recovery information for a group of files. In this benchmark, we create a recovery set for a Windows Vista ISO and time the process, which is what you see in the first screen shot below.

The second screen shot is the length of time it takes to recreate the original files if one is accidentally deleted. The test gives us an idea of how well the system memory, processor power and hard drive inside the machine performs. 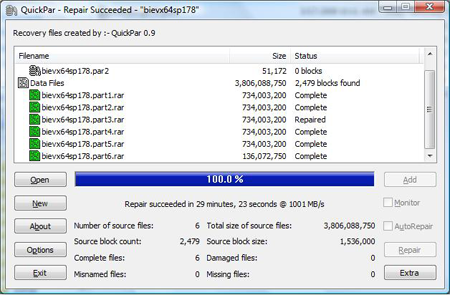 For this benchmark I grabbed the 1080p flight video from the Microsoft website and used the free Media Encoder from Microsoft to turn the video into a file for download with video at DVD quality (2Mbps CBR) and audio at CD quality CBR. Encoding video is a very common task and the time it takes gives a good idea of overall computer performance. Check out the screen shot below for the Gateway MD7826u's time. 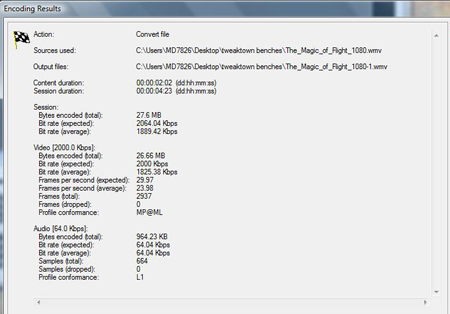 MobileMark 2007 is a synthetic application that strains the battery on the notebook and gives a score for the run time while doing common computing tasks. I tested the Gateway MD7826u with the DVD playback test and the run time for the machine with a fully charged battery and settings on high performance are seen in the screen shot below. 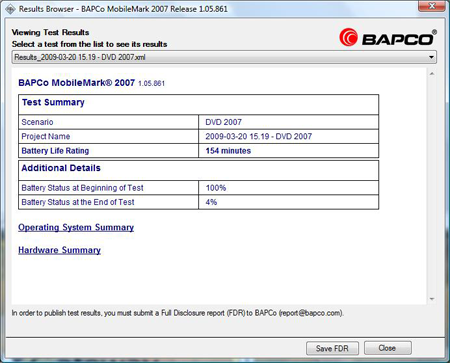 Now that we have all of the benchmarks out of the way, we can get into the hands on section of the review where the little details of its real world use come into play.

The Gateway MD7826u has an odd-looking keyboard which has square keys that are beveled on the edges. Other than looking strange, the keyboard functions well and offers decent tactile feedback. The keys are well spaced and offer a slight click when pressed that should work well for touch typists who like audible feedback. The keyboard lacks a number pad, which is normal on a 15-inch notebook.

The screen is slightly larger than what you find on some notebooks in the same class, but not enough to sway me from one 15-inch machine to the Gateway MD7826u for the extra few tenths of an inch of screen. As I mentioned before, the screen is glossy and has a problem with glare in bright environments. I am no fan of glossy screens because of this and would prefer to see a matte option. Despite the glare problem, the Gateway MD7826u screen has good color reproduction and decent black levels making it work well for movie watching, which is what the machine was built for. 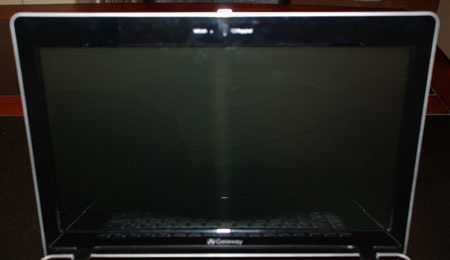 The track pad is very large and has a section on the right side for scrolling through web pages. The pad offers the same accuracy and feel that you expect to see from a track pad on any mainstream notebook. The two buttons are large and well spaced, though the beveled edges of the track pad area place the buttons slightly further down than most notebooks I have used. 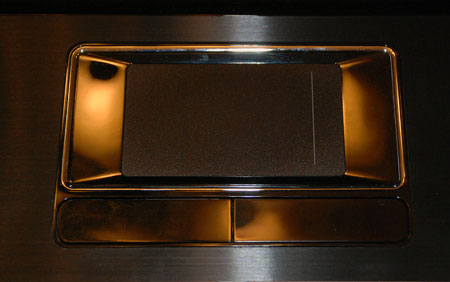 This meant that in a dark room I found myself hitting the beveled edge when trying to hit the right or left mouse buttons. I could do without the fancy beveled edges of the track pad; they look good but add a learning curve that you have to get used to before hitting the buttons accurately at times.

The areas to the right and under the keyboard look blank when the notebook is turned off, but when you power the notebook up, icons for hard drive, power and other features illuminate under the left corner of the keyboard and touch sensitive controls for volume, mute, and media control light up on the right side. The controls are easy to use and look cool to boot. 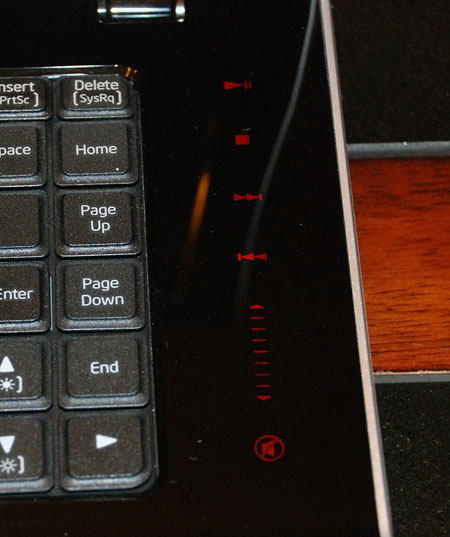 One of my gripes with the Alienware m15x that I reviewed last month was that the onboard sound system was very quiet. The Gateway MD7826u has much more volume than the Alienware rig offered, allowing me to hear music and audio from movies even in noisy rooms without straining. The dual headphone jacks also mean that you and a friend can listen to music or movies without disturbing others around you.

At the end of the day, the Gateway MD7826u is a nice multimedia computer offering good performance for a nice price. In today's economy, $850 upwards may as well be a high-end machine for most of us, but considering the performance you get, the price is very easy to justify. The Gateway MD7826u is a mainstream machine that has good multimedia chops. The notebook will make a nice graduation gift when May rolls around for a college bound student needing a do-it-all notebook in a sleek package. 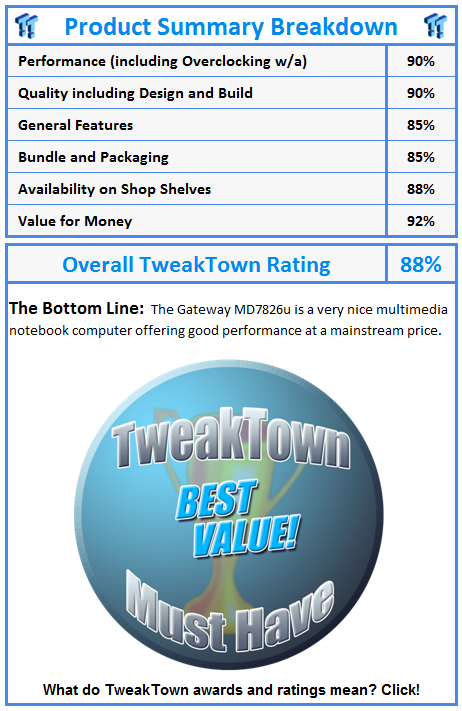