The XPG Precog S gaming headset presents a wired and affordable solution with impressive 50mm drivers in a lightweight stylish build, but it's held back by a below-average microphone and a few design shortcomings.

With so many headset options out there, it's often hard to choose the right one to fit a particular budget. But there's another thing that an abundance of choice brings to the table: companies are competing at a level that is delivering some very cool tech across the board.

Case in point, ADATA's new XPG Precog S Gaming Headset is aimed at gamers looking for an affordable audio solution that delivers when it comes to performance and comfort. With its large 50mm drivers and minimal stylish design that includes an auto-adjustable ski band style headband, there's a lot to dig into. 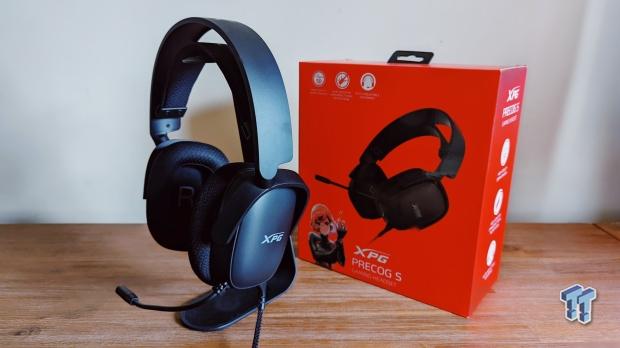 This is why starting with the cable that runs from the headset to your PC or console might seem a little strange. The XPG Precog S Gaming Headset is a wired gaming headset, and with a 3.5mm connector and PC splitter adaptor, the quality of the cable often barely gets a mention. But when a cable is stiff and prone to twisting, it's worth pointing out - after all, one of the key reasons people look to wireless when it comes to portable audio is not having to deal with cables that get in the way.

The opposite is true too, and the good news here is that the XPG Precog S Gaming Headset's braided cable is not only flexible and able to simply hang, but it stays straight and doesn't tangle when moving from PC to console.

That little tangent aside, as a wired offering, there's a lot of versatility here. With a wired analog connector, you're pretty much compatible with any device that features a 3.5mm jack. Connect the XPG Precog S Gaming Headset to an Xbox Series X console, and you can instantly jump into a game and experience some of the console's inbuilt virtual surround whilst being able to chat with friends.

The only real limitation that comes with the all-analog approach is that you're beholden to hardware decoding, amplification, and the quality of what you're connecting to. More on this in a bit. 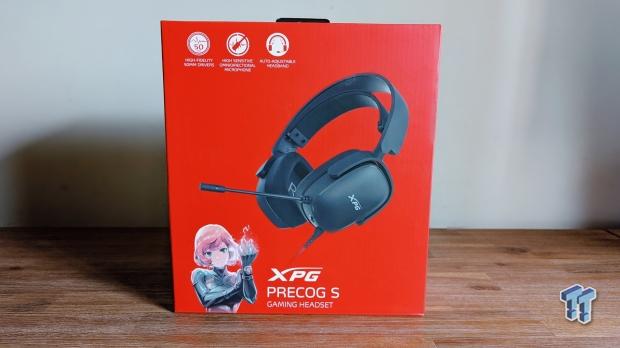 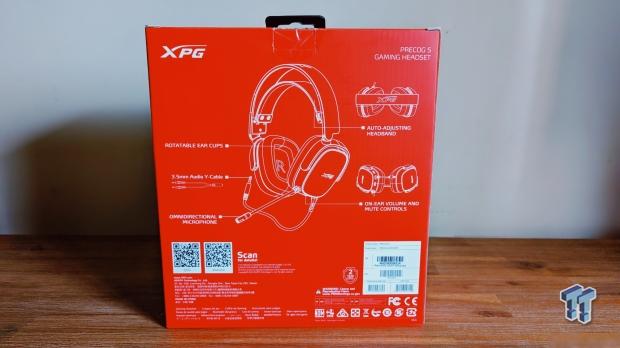 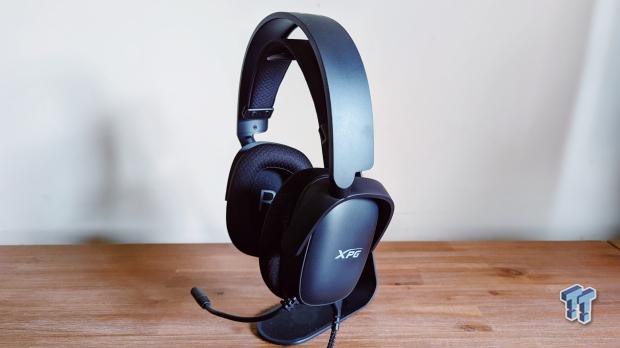 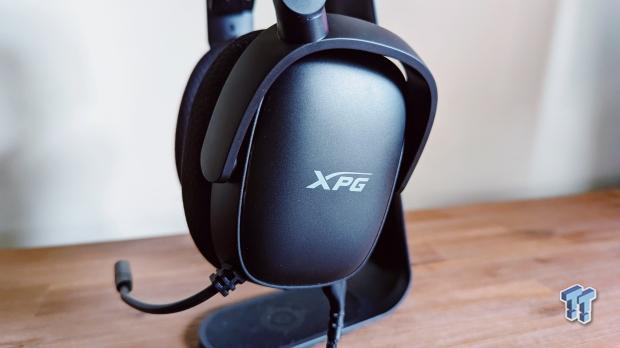 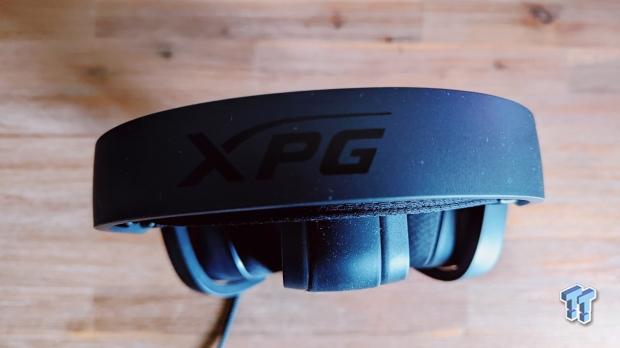 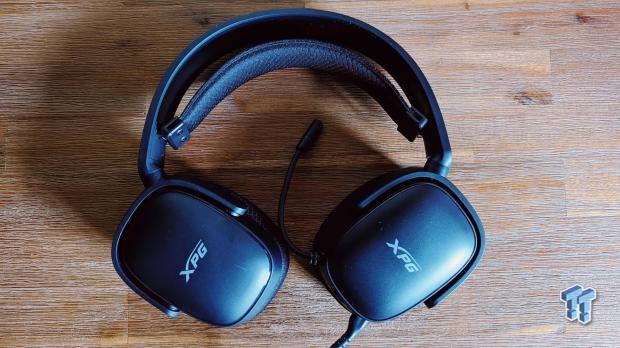 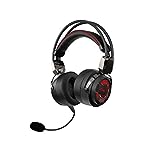 Weighing in at 300 grams, the XPG Precog S Gaming Headset is what you'd call a lightweight headset. Three hundred grams is sort of the sweet spot for most people where a headset goes from being something you can feel to something barely noticeable in terms of overall weight. For XPG, delivering this lightweight build is easy to understand.

As an affordable and budget-conscious effort, the materials are all plastic, with the headband itself being a little on the thin side. The thickness you can see is mainly a sharp edge that adds a perceived chunkiness that isn't there, but the headband is flexible, and after a few hours of use, there wasn't any change to the overall fit.

As for the physical look, ADATA has opted for the over-ear helicopter headset design with minimal flourishes outside of a logo on top of the headband and each of the ear cups. It's a stylish look that fits in nicely with a desktop rig or a console, and the addition of a flexible fabric ski band adds to that.

The auto-adjustable headband handles all the, well, adjustment, with the cups themselves being able to swivel and tilt for that final bit of movement. It adds up to a comfortable fit - with the only downside being the fabric cushioning being a little soft and not of the memory foam variety.

For an affordable entry, the microphone is not detachable or even retractable, but it is surprisingly flexible and able to be positioned in just about any spot for voice chat. In terms of onboard controls, there's a robust volume dial and a mute switch on the left, though the latter is unintuitive. It's kind of like one of those hard-to-use switches on an old piece of hardware that flips between two modes and makes the process of muting with ease a problem for the XPG Precog S Gaming Headset.

Without any official software support, the XPG Precog S Gaming Headset is a wired analog 3.5mm headset. You're pretty much left to the platform or third-party apps to make any adjustments. On the console side, this isn't a problem as access to chat and microphone volumes and mixes and things like virtual surround are all easy to get to and tweak. On PC, Windows 10 offers up its virtual surround with Windows Sonic for Headphones - in addition to access to third-party apps like Dolby Atmos and DTS. 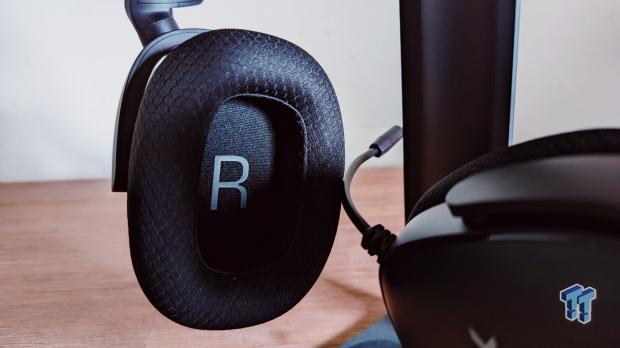 With its default tuning, the XPG Precog S Gaming Headset's 50mm drivers deliver clear and distinct bass and detail across the frequency range - so there isn't a reliance on software to provide the tweaks needed to make them sound good. There is some sharpness to the high-end that I did tone down a bit based on a personal preference for a warmer sound, but jumping from PC to Xbox showcases the out-of-the-box audio performance you can expect.

A somewhat neutral sound with some booming low-end is probably the best way to describe the sound that you can get from the XPG Precog S Gaming Headset and its 50mm drivers. Now, "can get" is important here - and important for any 3.5mm analog headset - because the quality of the DAC and amplifier you're connecting makes an audible difference.

In the PC space connecting to the onboard audio chipset on a mainstream or budget-friendly motherboard versus a dedicated external sound card or headphone amplifier (like, say, the EPOS GSX 300 Audio Amplifier) adds to the sound you can hear. With its 22 Ohm impedance, a decent DAC removes distortion and can make full use of the larger than normal 50mm drivers.

Of course, having a dedicated DAC is not a must, but it elevated the decent audio performance you can get from connecting to an Xbox controller to something that sounds impressive no matter if it's music or a game. As hinted at earlier, the high-end frequencies of the XPG Precog S Gaming Headset do sound a little sharp and overly pronounced, but there's depth to the bass and mid-range that adds a cinematic flair to games like God of War, Ghostrunner, and the long-awaited Return to Monkey Island.

It was firing up Ghostrunner, though, with its chunky synth-wave soundtrack and environmental sound effects that evoke the rainy nights of Blade Runner, which presented that initial 'wow' moment. The sound doesn't sit on the high-end in terms of fidelity and what you can get with an expensive set of cans, but the booming bass, clear vocals, and wonderfully spacious effects, pointed to ADATA not cutting costs where it matters most - the audio.

Okay, so maybe that final statement there should come with a big "but" because it's clear that keeping well-tuned and great sounding 50mm drivers for the speakers has resulted in ADATA treating voice chat with not much care. With its limited 100 - 8000 Hz frequency range, the voice quality of the microphone is what you'd call 'tinny' and functional at best.

Voice detail isn't clear and unable to capture a lot of the finer detail, so it sits on the telephone side of the quality spectrum, which makes this side of the XPG Precog S Gaming Headset bare bones. On the plus side, the microphone pick-up is loud, though there's a downside there too in that things like breath and background noise can make their way into the mix.

There's a lot to like about the XPG Precog S Gaming Headset, and even though the construction is pretty much all plastic (with some fabric), there are a few nice touches. The microphone is impressively flexible, the auto-adjustable headband works well, the wired cable itself is great, and the lightweight fit makes it something you can wear comfortably for hours.

The design is stylish and sleek, too, something that still looks like a gaming headset but also feels entirely modern. The audio quality is also great for the price point, and being able to switch between PC and console sells the well-balanced sound you get out of the box. 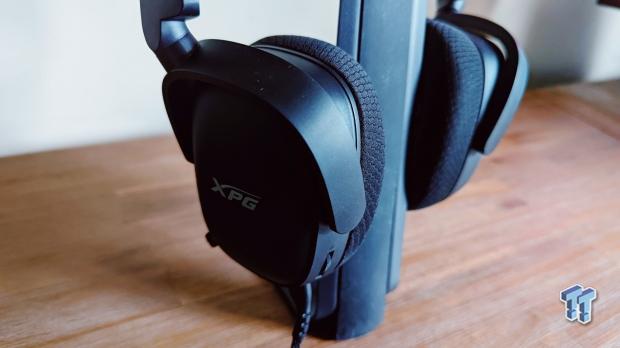 But tweaking does improve things some. And as more companies make the switch to USB for wired audio, with the benefit of having a singular DAC, it'll be interesting to see if XPG goes this route in the future. As it stands, we got our best results when connecting directly to a decent external audio card and amplifier (which is to be expected with a 3.5mm setup) and took full advantage of the 50mm drivers.

The same can't be said for microphone voice quality, which is functional and telephone-like in its delivery no matter what you do. In the end, a few design choices hold this back from ticking all the right boxes, though it remains a viable and affordable wired solution.

The XPG Precog S gaming headset presents a wired and affordable solution with impressive 50mm drivers in a lightweight stylish build, but it's held back by a below-average microphone and a few design shortcomings.