The Lenovo Z13 is a gorgeous notebook with solid hardware, but its pricing is steep for the current market, considering the performance given.

Lenovo has one of the largest laptop portfolios on the market. It extends deep into workstation territory all the way out to consumer desktops, laptops, and even tablets. In our recent chat with Lenovo, they noted the availability of their new ThinkPad Z13.

When the specs were sent over, I was instantly interested in this platform, not for its small form factor, which is impressive, but for the actual hardware build because we have not seen many AMD-powered notebooks come through for testing.

The unit sent over for review is the new Z13 Vegan Leather Edition; this is an AMD platform, as noted above, with ours equipped with the Ryzen 7 Pro 6850U. It's an 8c/16t CPU with a base clock of 2.7GHz and a boost of 4.7GHz. Lenovo has paired this with 16GB of DDR5, soldered but 6400MHz. Onboard graphics are the Radeon 680M.

The display on the Z13 is a 13.3" 1920x1200 IPS panel. It offers anti-smudge and touchscreen capabilities at 400nits. The integrated camera is an FHD solution at 1080p with IR capabilities for Windows Hello. This solution also has a fingerprint reader for increased security.

Storage in our model is a 512GB Gen4 NVMe solution, while connectivity includes a Wi-Fi 6e solution that supports BT5.2. The Z13 is limited in its outward connectivity, with just two USB-C available, both supporting USB 4. There is also a 3.5mm headphone jack.

The current MSRP for the Lenovo ThinkPad Z13 in its Vegan Leather configuration comes in at $2849.99 with a one-year warranty. 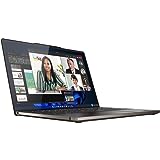 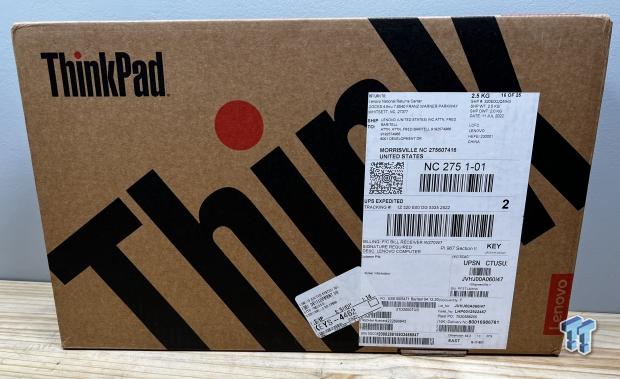 Packaging for the Z13 is the standard Lenovo setup. 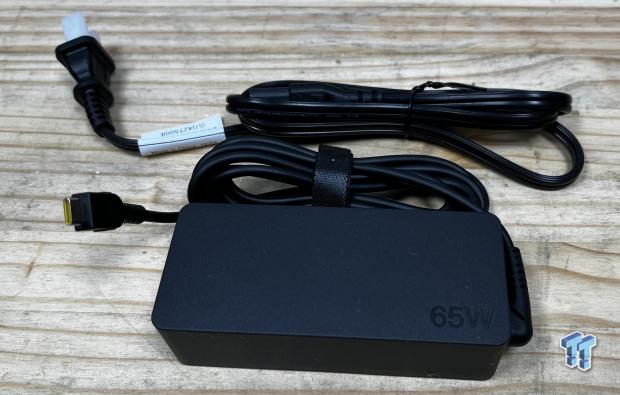 Included with the Z13 is a 65w USB-C power adapter. 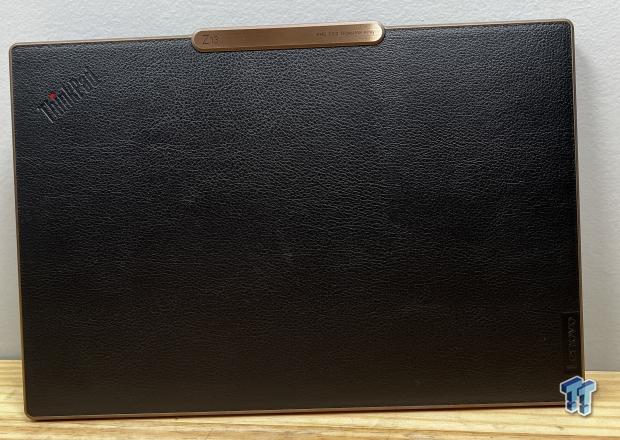 On the left side, ports include a single USB-C 4.

We have a second USB 4 port and the headphone jack on the right side. 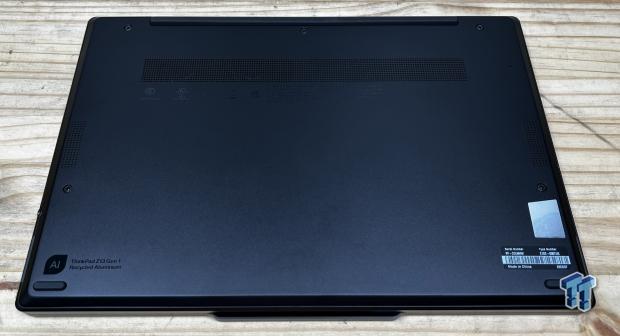 The underside uses a recycled aluminum panel, a possible first for Lenovo. Across the top, we have a long vent to pull in cool air. 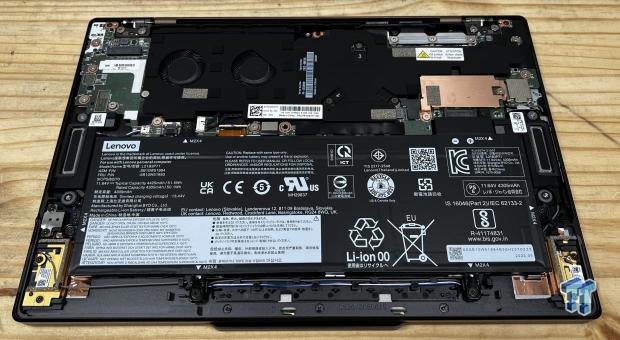 Opening the Z13, the battery takes up much of the bottom of the chassis. NVMe is tucked away under the copper heat sink on the right, and WiFi is an embedded solution right next to it. 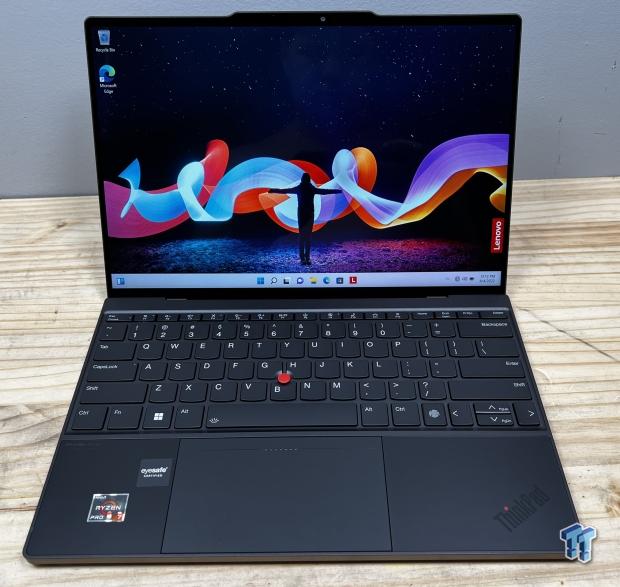 Taking our first look at the Z13m, the keyboard is very compact but still has the IntelliPoint keyboard. The trackpad is quite large for the frame and is centered to the left. The display is all but bezel-less with an extra notch designed into the top for the IR camera. 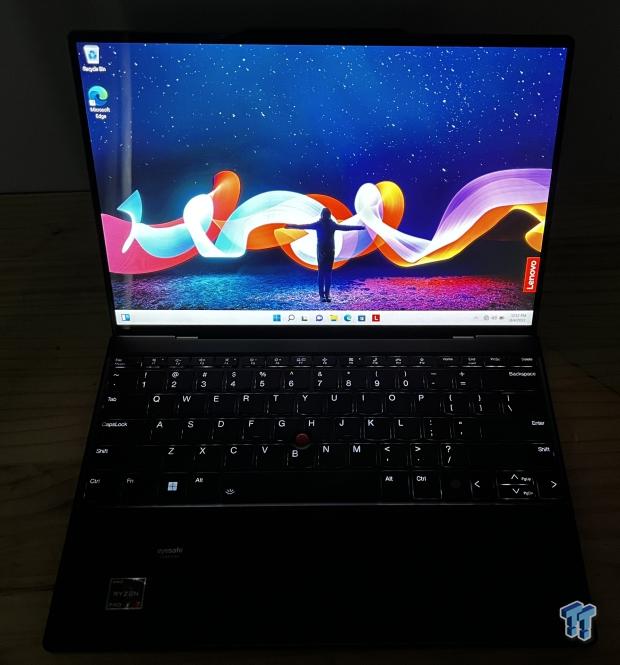 The Z13 does offer a backlit keyboard, white in color. 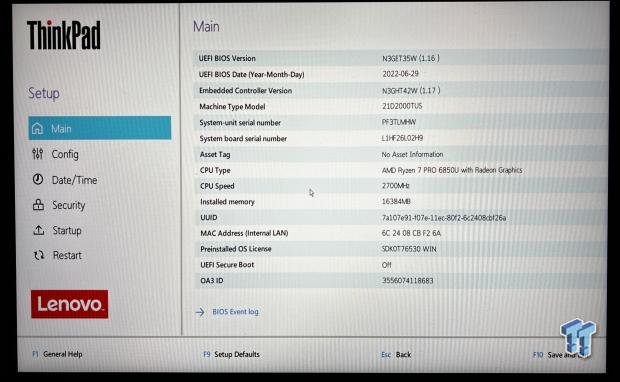 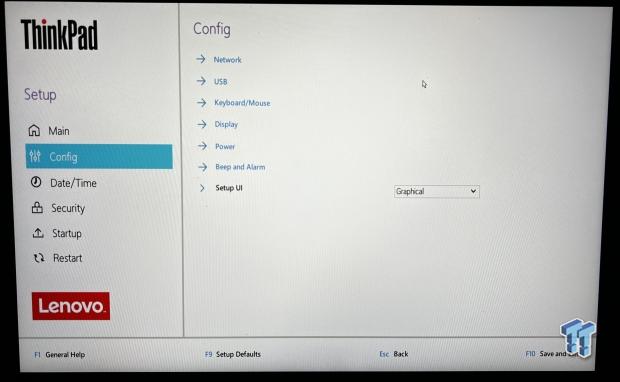 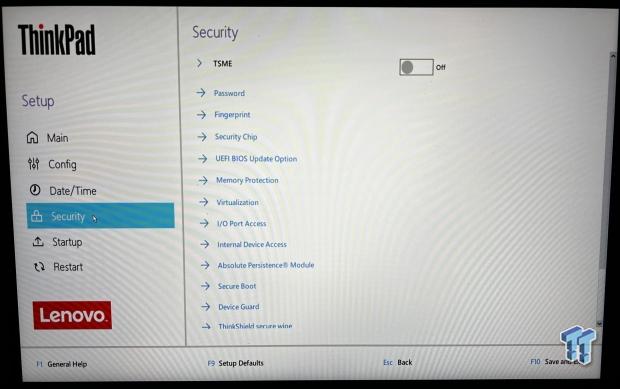 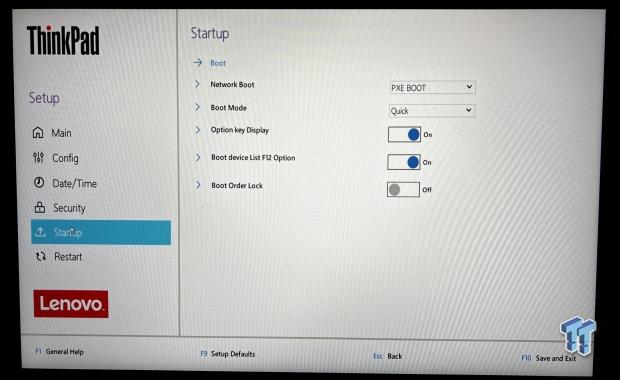 The Lenovo BIOS is simple but does offer mouse support. The main menu includes hardware information, while the configuration menu allows changes to the network, USB, and power settings, among others.

Diving into the security menu, you will find many options for password settings and the fingerprint reader. There are also options for virtualization and ports. 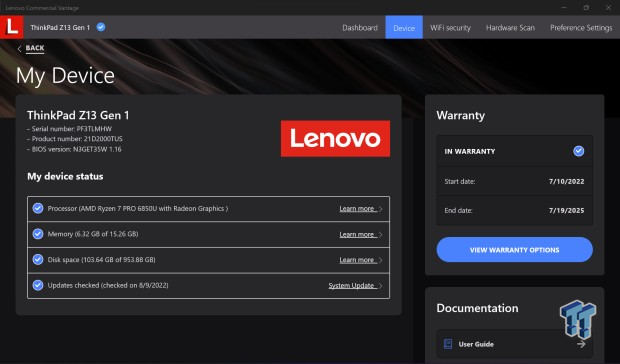 The software included is Lenovo Vantage; this offers a quick solution to optimizing the settings on the Z13 along with managing updates and any customer support needed. 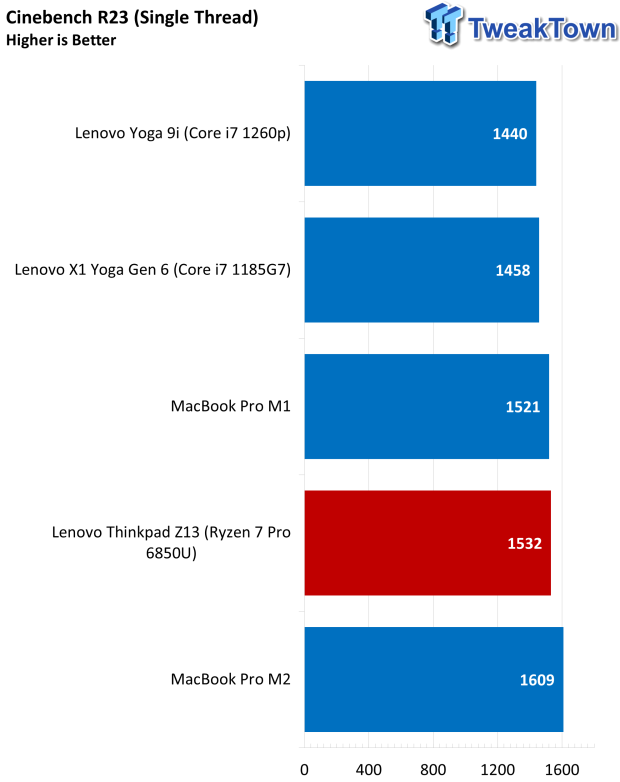 We followed our standard routine of testing, starting with R23. In this setup, the Z13 with the 6850U landed right behind the M2 MacBook with a score of 1532. 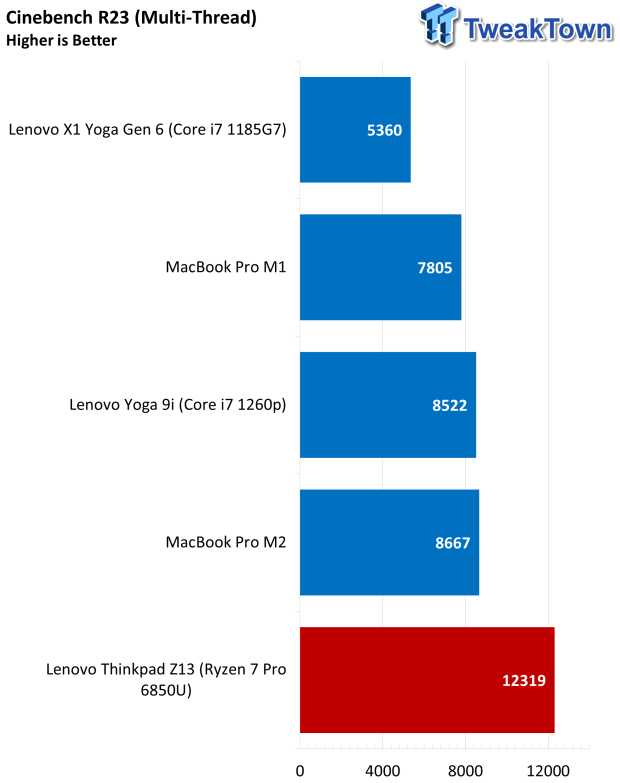 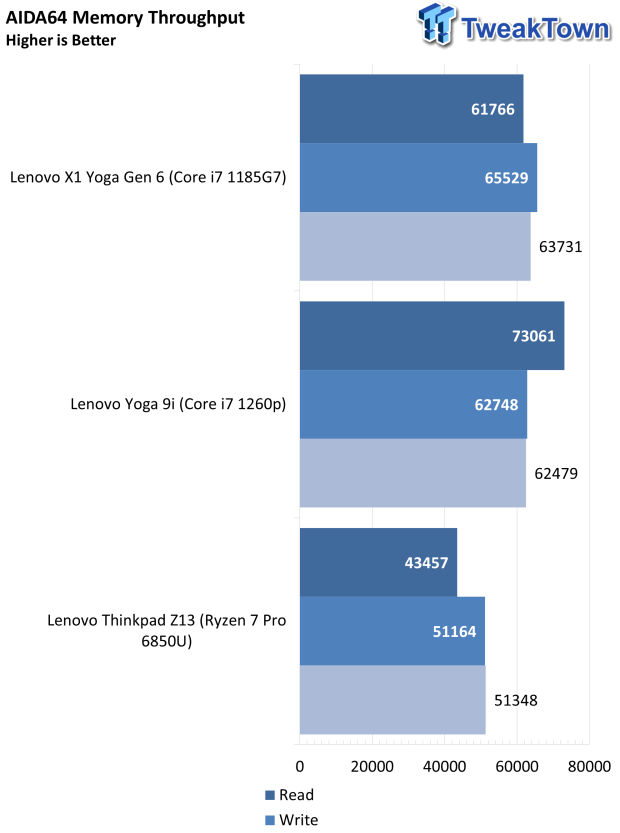 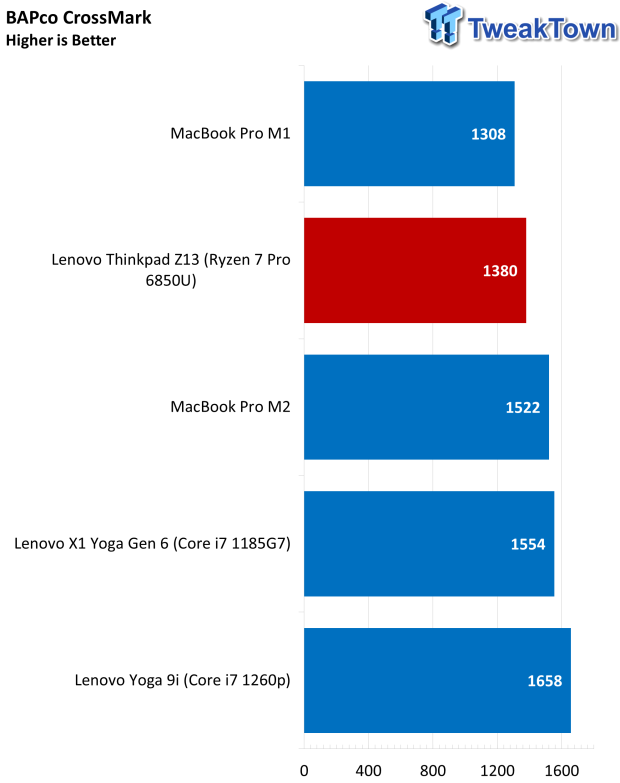 CrossMark landed the Z13 towards the bottom of the charts, stuck between both MacBook Pros. 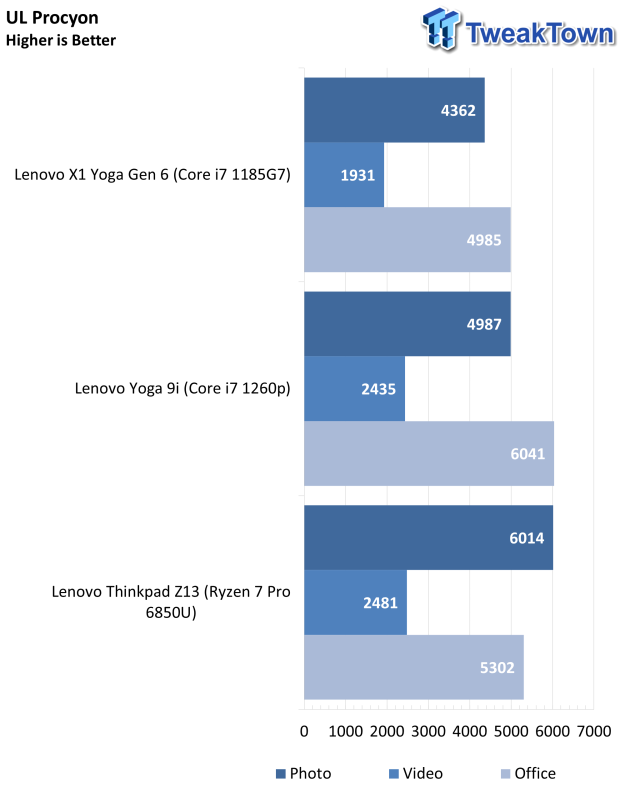 Procyon was mixed. The Z13 did take the top spot for Photo editing and was neck and neck with the 1260p in Video. Office put the Z13 in between the 11th and 12th Gen Intel platforms. 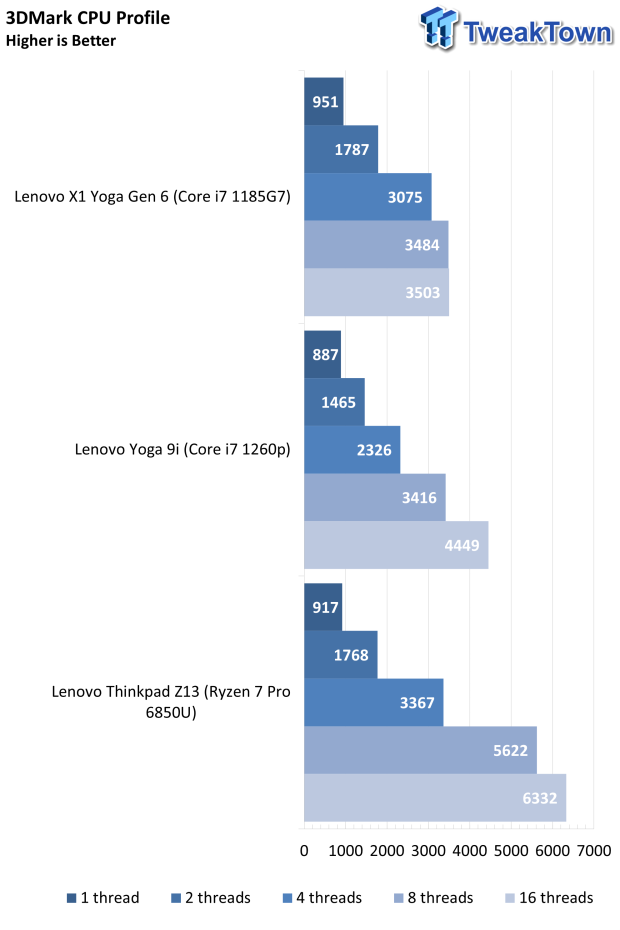 CPU Profile gave the nod to the Z13 at the higher end with the extra thread count; the peak score was 6332 while the single thread was 917. 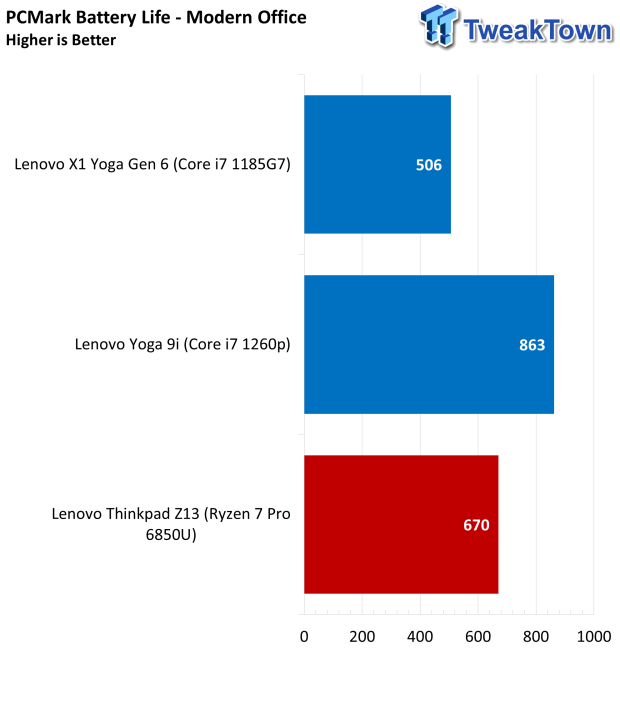 PCMark Battery testing came in at 670 minutes for the Z13; this was markedly better than the 11th Gen Intel platform but lagged the 12th Gen Intel. 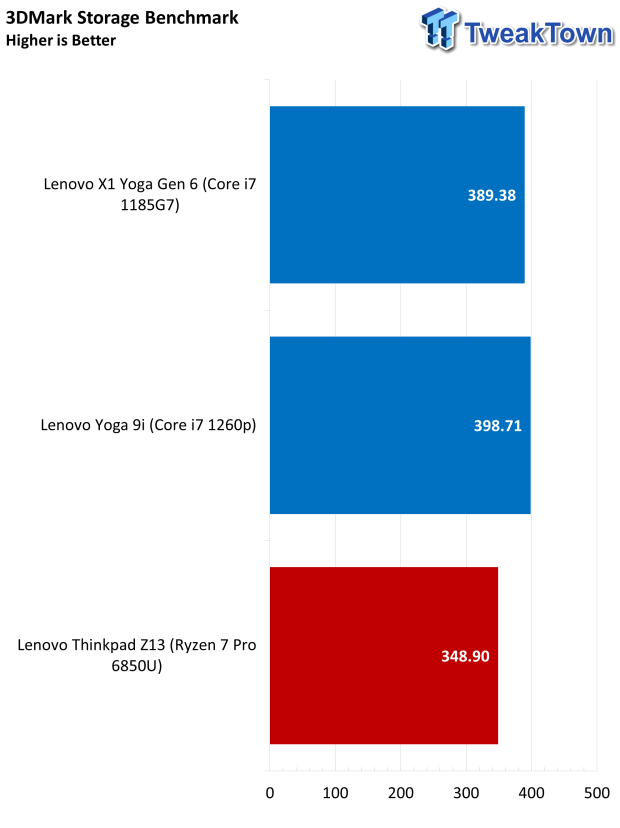 Storage performance came in at 348 MB/s. 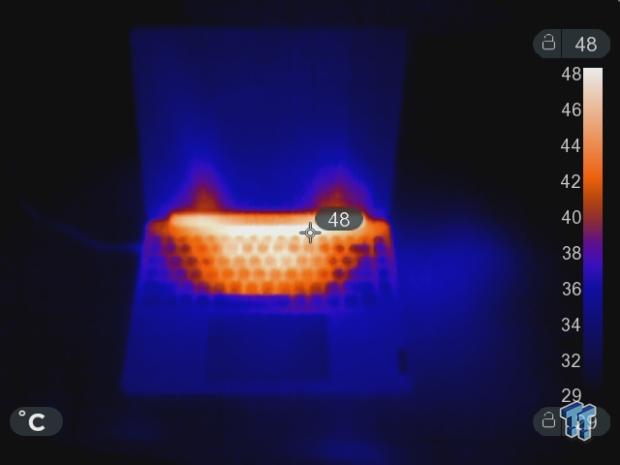 We got a thermal image of the Z13 during testing with our Seek Thermal Camera. As seen above, most of the heat is centered in the system tapering out to the edges. Peak temps were 48c.

The Z13 ended up being a rather attractive package with the Vegan Leather and copper trim that brought an extra layer of elegance to the platform. The hardware was solid in our testing, though it could be held back by weaker thermals because of the inherently thin design.

That said, it held its own in many scenarios we ran it through, including single and multi-thread tests. R23 and CPU profile landed it near the top of our charts, as did CrossMark, and in many cases, the Ryzen 7 Pro was trading blows with the 12th Gen 1260p.

Using the Z13, the keyboard was a bit shallow and didn't have the full depth of the larger ThinkPad system, but it wasn't the worst we have used. The trackpad, too, was shallow and lacked any mechanical feedback, something I prefer if I'm not going to expand to a desktop mouse.

The software was more than adequate for this system. I find Lenovo Vantage to be one of the better non-invasive solutions, and Lenovo doesn't typically stack its ThinkPad platforms with bloatware. The Z13 follows this.

Overall, the Z13 is an extremely lightweight small form factor solution for those wanting more elegance in their traveling companion.

The Lenovo Z13 is a gorgeous notebook with solid hardware, but its pricing is steep for the current market, considering the performance given.