For consumers new to the MacBook Pro, M2 is a solid entry platform, but it doesn't offer a large enough performance boost for current M1 users to upgrade.

A touch over a year ago, we updated our aging 2013 MacBook Pro to the M1, and we were more than impressed with the uptick in performance. Since then, it has served as a daily driver for email, web browsing, and image editing.

With that, Apple recently launched the M2 in the MacBook Air, which was quickly followed by upgrades to the 13" MacBook Pro lineup, so we had to run out and grab one to see how it compares to our M1.

Both of our MacBook Pro models are the base configuration, but Apple has updated the 2022 model slightly compared to the 2020 M1 model we now use daily. For starters, we have the Apple M2 Silicon at the heart, offering an eight-core design split 4+4 between performance and efficient cores. The GPU has been bumped up to 10 cores from 8 in the M1, while both the M1 and M2 use the same 16-core neural engine.

The M2 has been updated to support DDR5 - the model in house is equipped with 8GB of RAM. Storage is the base 256GB SSD that we had in the M1 last year. The display has gone unchanged alongside the chassis - retina display with 1600p resolution, P3 wide color at 500 nits, and supporting true tone. 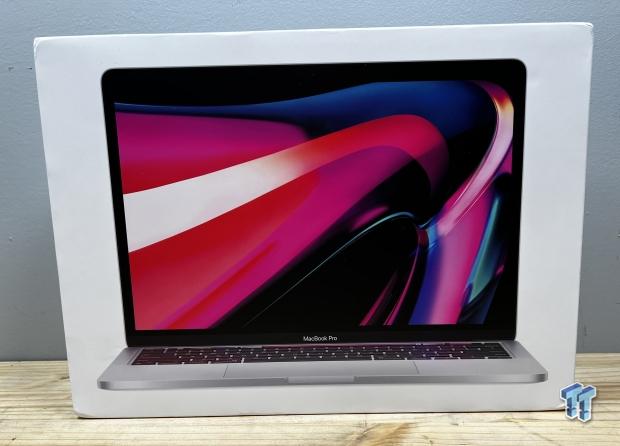 Packaging is quite colorful, as it was with the M1 MacBook Pro. 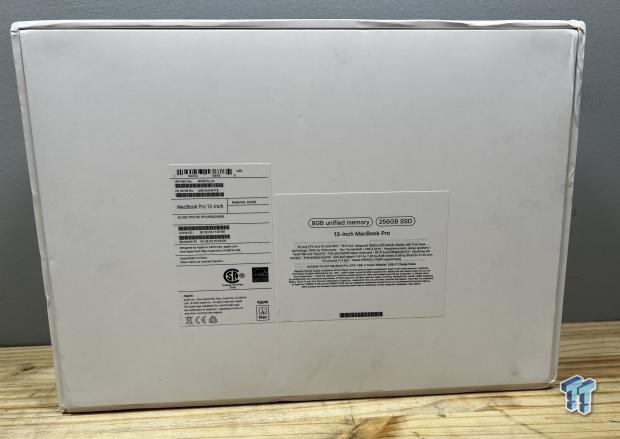 On the backside, we have model identification to the right and regulatory info on the left. 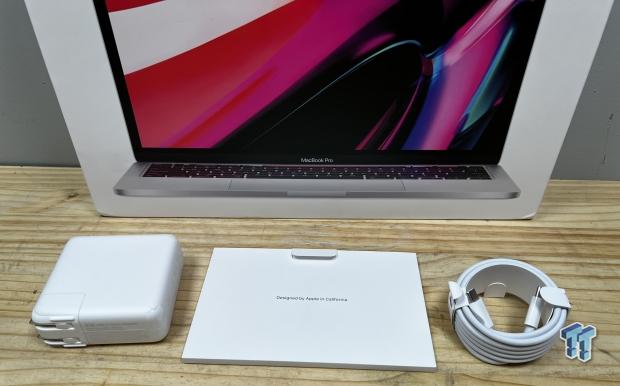 Included with the MacBook Pro, we have the 67w USB-C charger and USB-C cable. 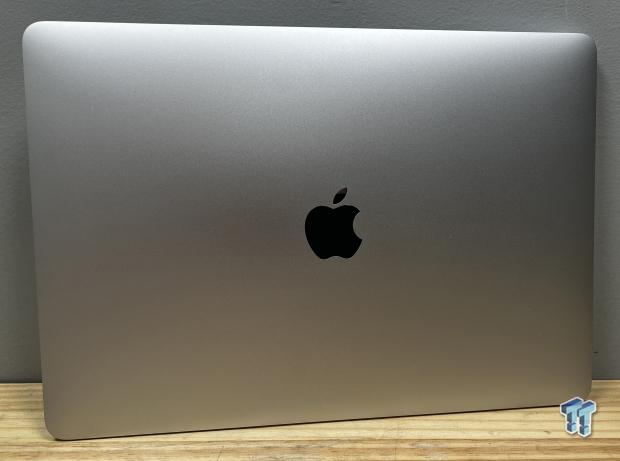 Our MacBook Pro was ordered in the silver finish - an all-aluminum chassis with a chrome Apple logo serving as the only branding.

The bottom too is all aluminum, removable with six screws. Four feet keep the aluminum surface off your desk, while the fine print will offer you the model number.

The left side of the MacBook Pro offers two Thunderbolt 4 ports.

On the right side, we have the 3.5mm audio jack. 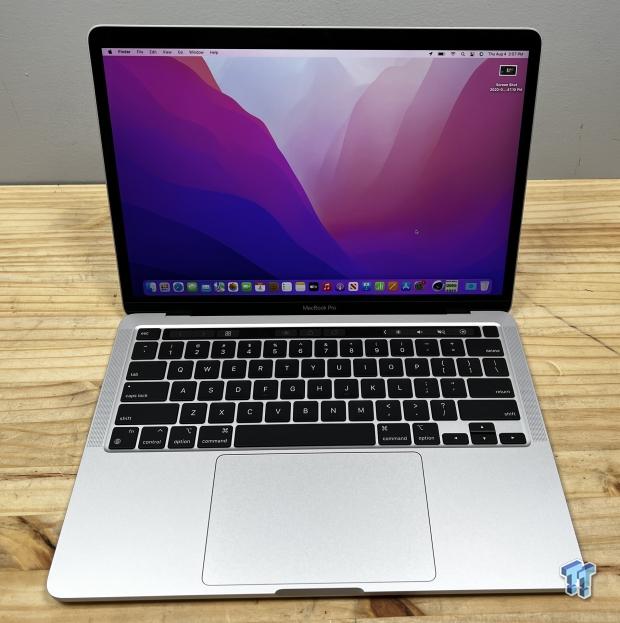 Opening the MacBook, not much has changed. The trackpad is still large and centered in the chassis, while the keyboard offers the touch bar across the top. 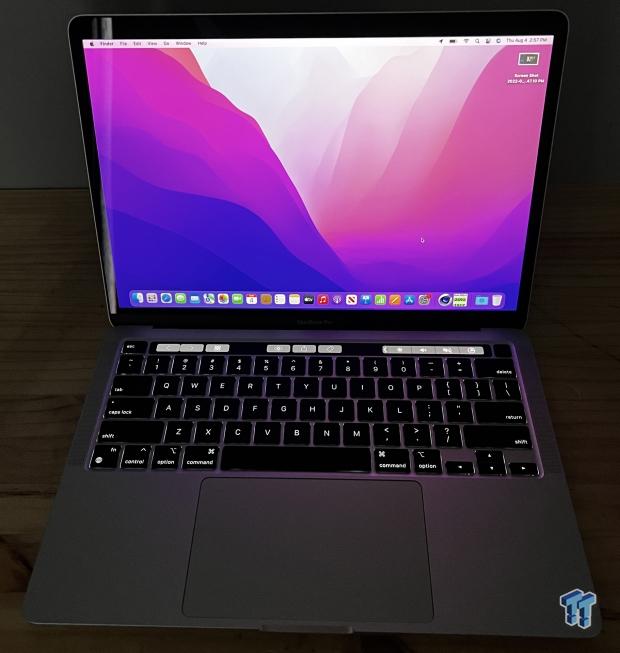 With the lighting turned off, we can see the backlit keyboard in white.

Removing the panel, the internal layout is identical to the M1. The battery is a split design, cooling again on the left side and the M2 motherboard on the right. 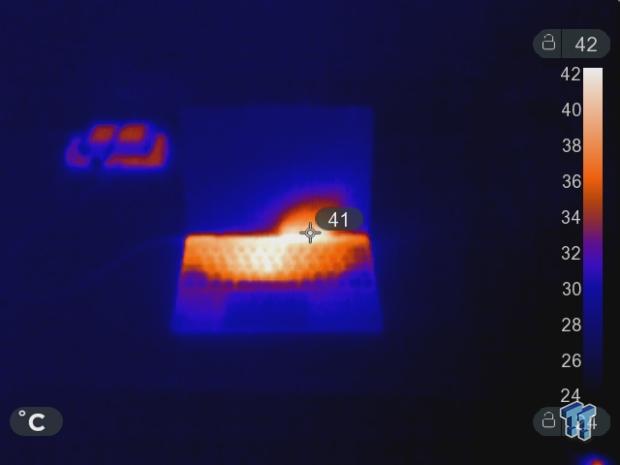 Thermal images do show a bit more heat on the right side of the MacBook, with a peak temperature of 41c. 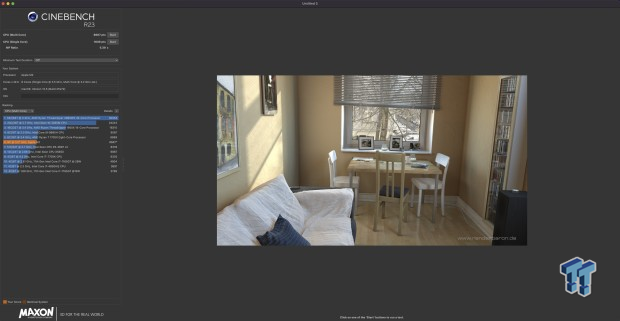 Single thread performance for M2 came in at 1609 while multi-thread touched 8667. 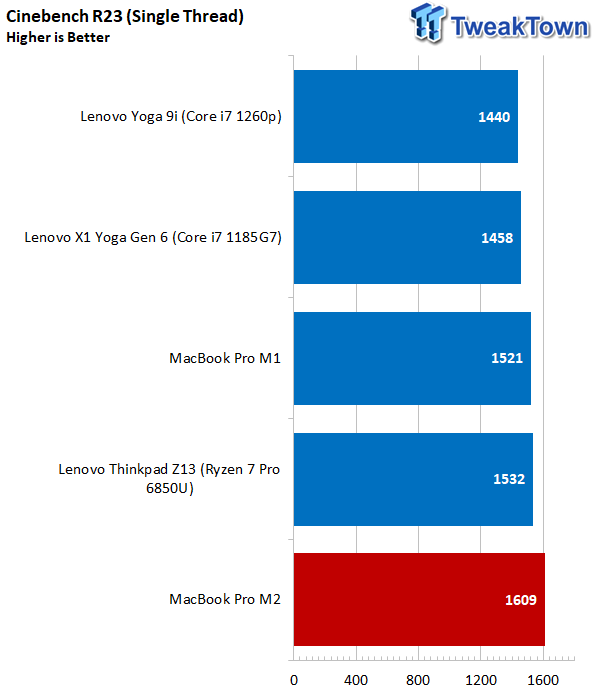 Comparing our M2 MacBook Pro to M1 alongside the latest options from Intel and AMD, the M2 is surprisingly good in 1T, taking the top spot in our chart by a good margin. 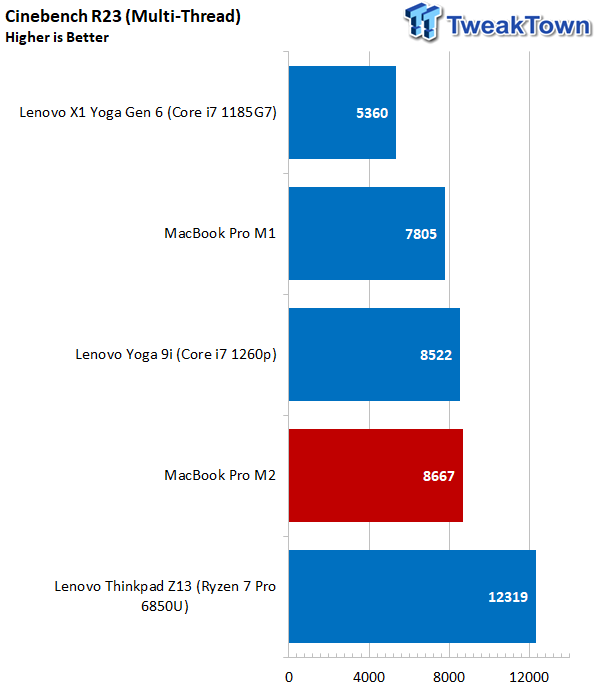 Multi-thread comparison has the M2 behind the new 6850U from AMD, and it does beat out 11th Gen Intel quite easily and slides by the 12th Gen 1260p. 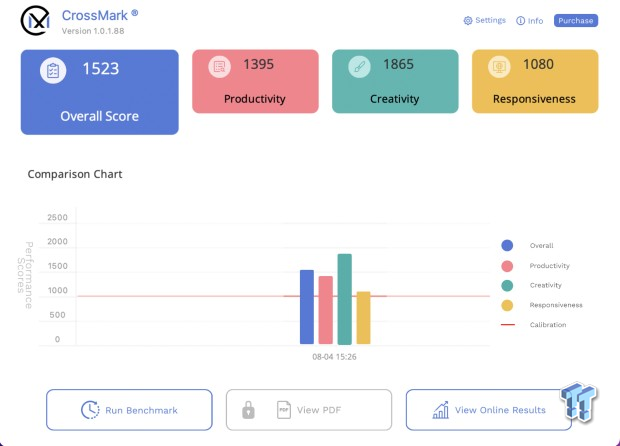 CrossMark gives an overall score of 1523 with a breakdown of 1395 in productivity, 1865 in creativity, and 1080 for responsiveness.

The comparison puts the M2 in the pack, with both 11th and 12th Gen Intel beating it out. 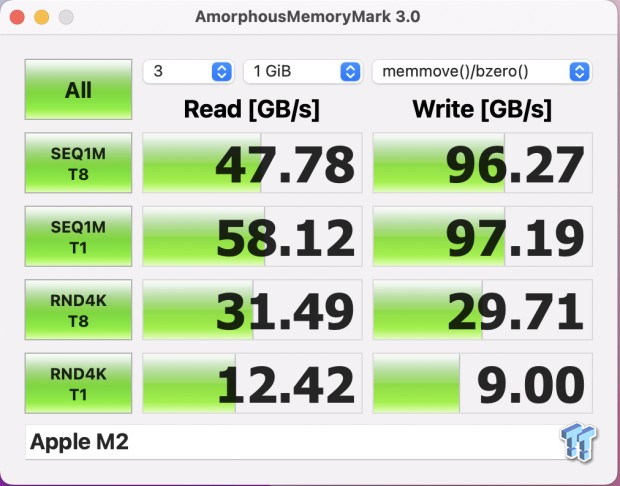 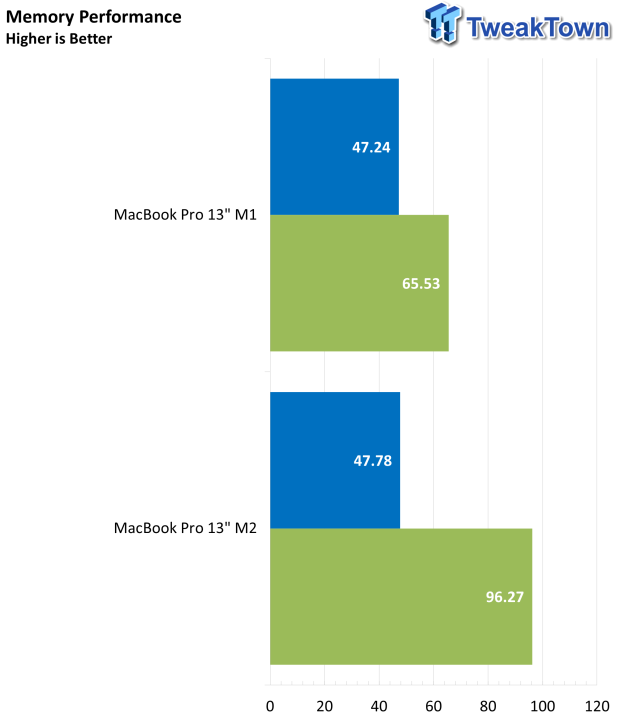 The M2 offers a touch more write performance while the read performance has stayed the same. 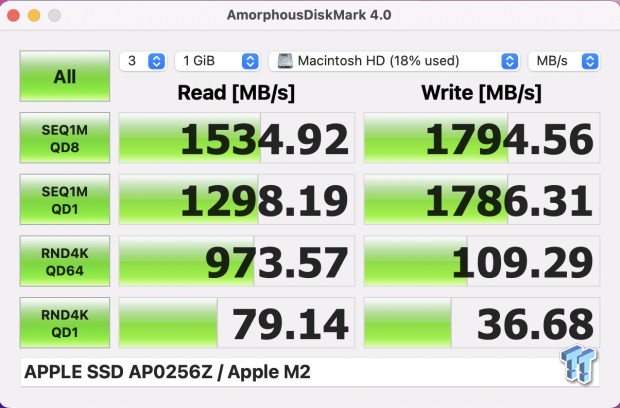 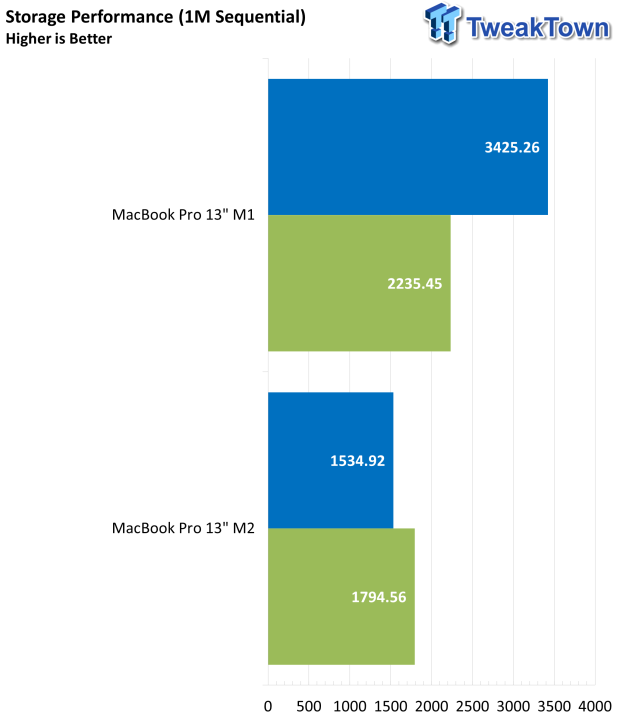 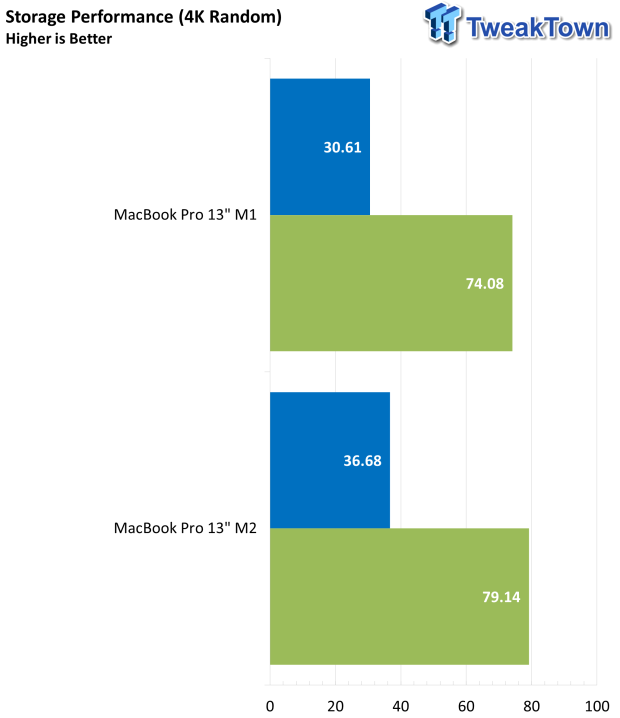 4KQ1 performance has stayed roughly the same, which is where you actually feel it in your daily activity.

When we reviewed the M1 MacBook Pro last year, the jump in performance coming from my aging 2013" Retina was huge. Diving into this year's M2 MacBook Pro, the leap in performance just isn't there. It does lead the charts in more than half of the benchmarks we ran, but at the same time, Intel and AMD are catching up, and with 13th Gen right around the corner alongside AMD Zen4, it won't be long before the gap shrinks further.

In our testing, the M2 ruled R23 with a single core score of 1609 while multi-thread had it neck and neck with 12th Gen Intel at 8667. CrossMark showed it in the middle of the pack alongside 12th Gen Intel. Memory performance overall was nearly the same as M1, even with the upgrade to DDR5 RAM.

Storage performance was rather disappointing, especially sequential, where we peaked at 1525 MB/s read. Some redemption was noted with the fantastic 4K performance, touching 80MB/s read in some cases, rivaling some of the highest-end NVMe SSD solutions on the market.

As for pricing, in a surprising move, with all the talk of inflation, Apple has not increased the price of the 13" MacBook Pro, the M2 currently carrying an MSRP of $1299.99, identical to the 2020 M1 model.

For consumers new to the MacBook Pro, M2 is a solid entry platform, but it doesn't offer a large enough performance boost for current M1 users to upgrade.