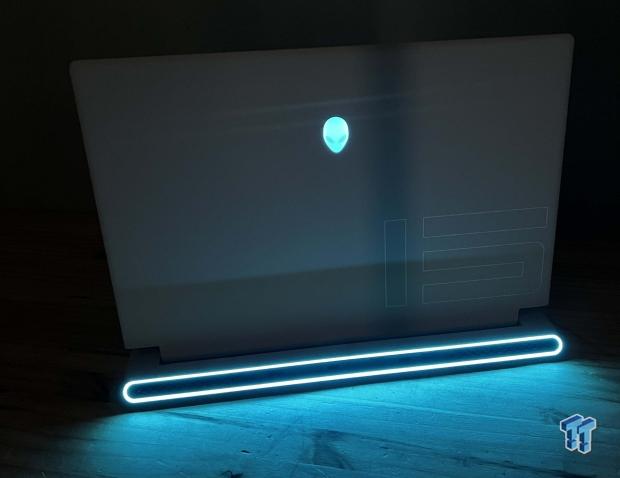 For Alienware, the X15 is the first to get the Intel Alder Lake treatment, the R2 being the first model and the model sent for review. This second-generation product shares the chassis design with the original X15, but quite a few upgrades have been optioned out for the R2.

One of the biggest features is the panel upgrade, moving from two 1080p options in the 2021 model to now offering a 1440p panel with NVIDIA G-SYNC and a 240Hz refresh rate.

Of course, it gets the underlying hardware upgrades from 12th Gen Intel Alder Lake, including DDR5. Alienware has taken full advantage of this by deploying 5200MHz memory over the base 4800MHz we have seen in other vendors' notebooks. 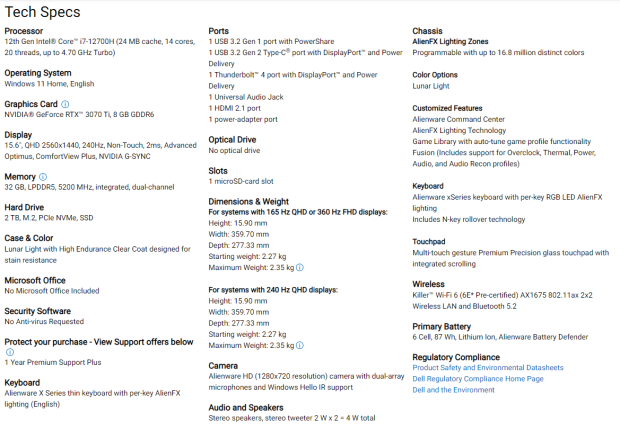 The image above denotes how our review system was configured from Alienware. It includes the Intel Core i7-12700H, the same processor we found in the Legion 5 Pro, a 14-core CPU that can boost to 4.7GHz. This has been paired with 32GB of system memory, running at 5200MHz. Discrete graphics include the NVIDIA GeForce RTX 3070 Ti Laptop GPU, and the panel is the QHD NVIDIA G-SYNC 240Hz solution we mentioned briefly above.

Storage includes a 2TB NVMe solution from Micron and networking is all from Intel with the Killer AX1675 6e solution. Port expansion offers a single Thunderbolt 4, HDMI 2.1, and a host of USB 3.2, both Gen1 and Gen2.

The MSRP of this system as configured lands at $2899.99 with a one-year warranty. 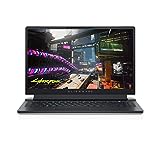 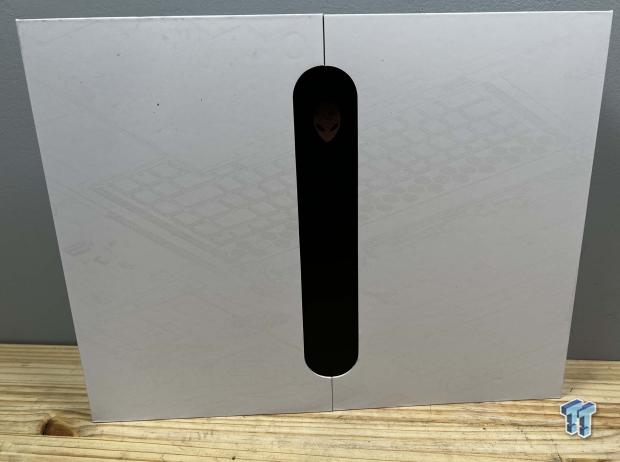 Packaging for the R2 was a rigid white box split down the middle with the Alienware logo. 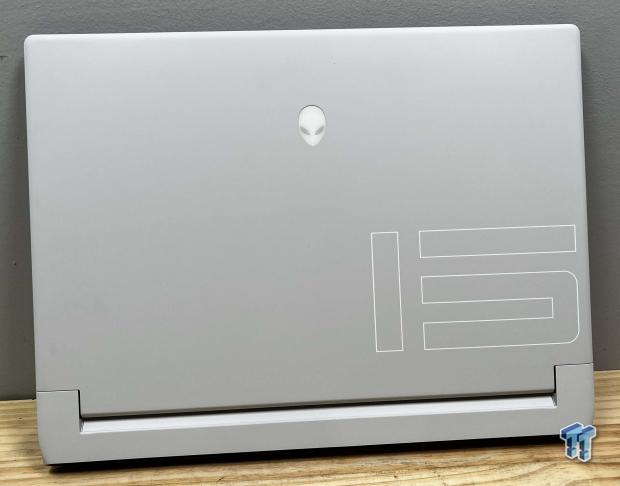 Once open, our sample came with a fantastic white finish, matte in appearance with the "15" brand on the panel alongside the Alienware logo. 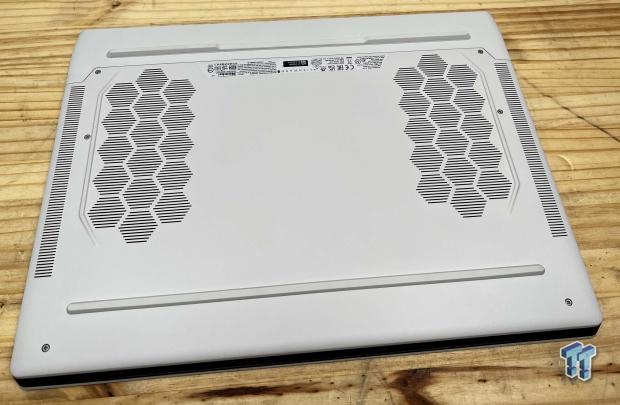 The bottom offers two large vents, and the panel is easily removable with Phillips head screws.

Like the Legion 5 Pro, the X15 R2 utilizes a true rear I/O. This includes USB 3.2 connectivity, Thunderbolt 4, and HDMI. 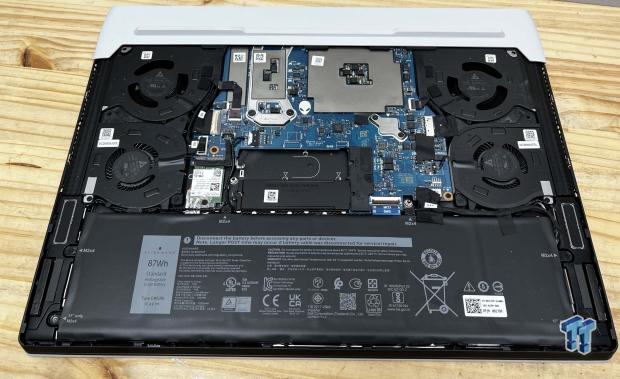 Internally, the R2 has a huge 87Wh battery, with both m.2 slots living just above. There are no visible memory slots on the bottom side of the motherboard, Wi-Fi is off to the left, and the cooling array includes four fans with heat sinks on each side. 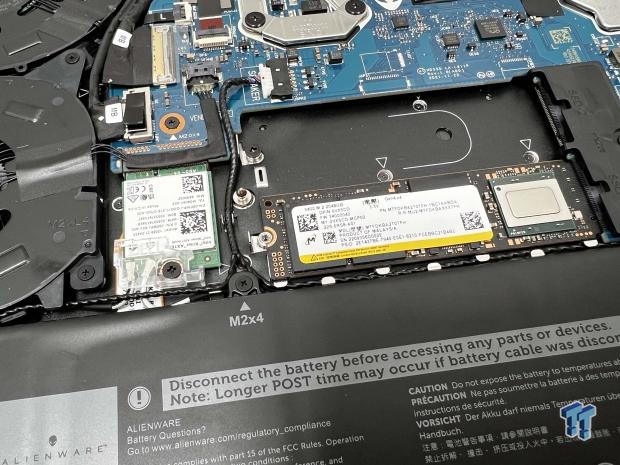 Removing the shields from the m.2, we can see the Micron 3400 NVMe in its 2TB capacity. 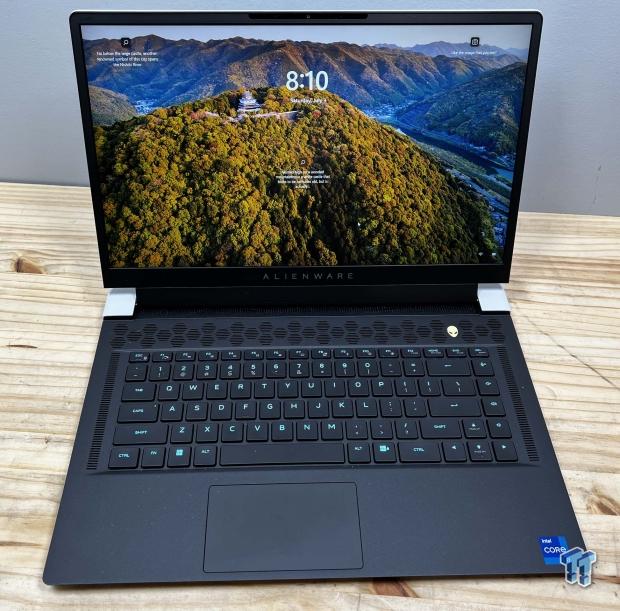 Opening the notebook, we note the keyboard is recessed into the chassis slightly, and there is per-key RGB backlighting. The trackpad is offset very slightly to the left. 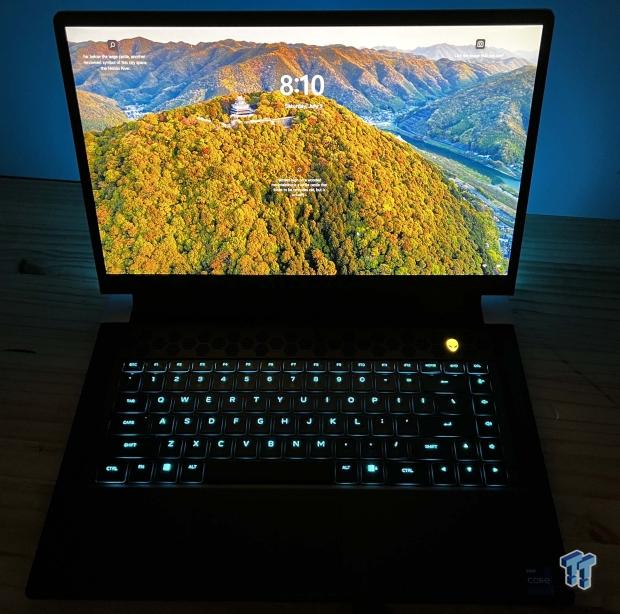 Turning down the lights, we can see the AlienFX lighting on the keyboard. This also extends to the rear I/O as you can see the glow behind the notebook. 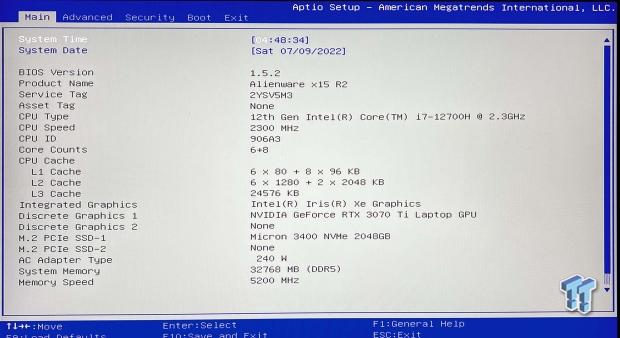 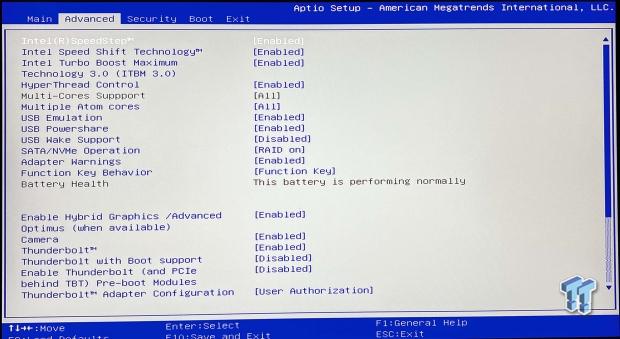 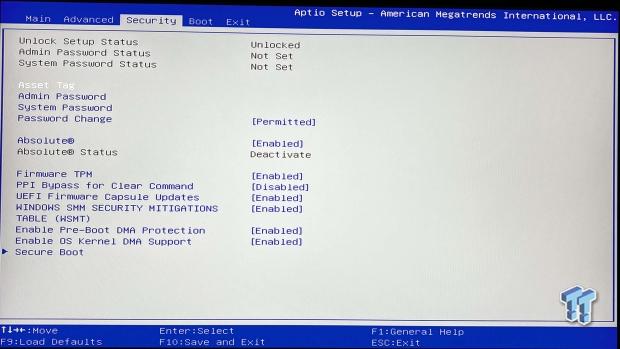 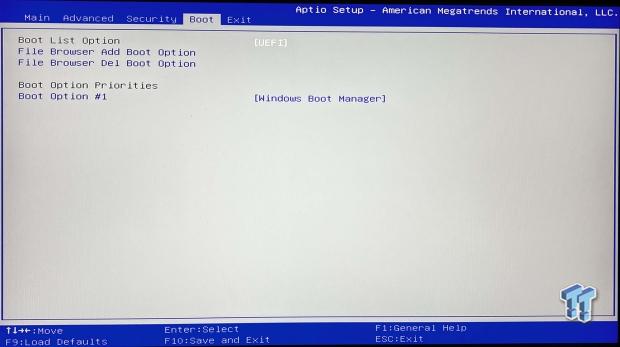 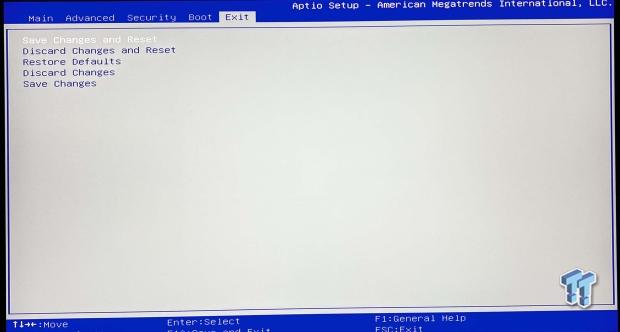 The BIOS on the X15 is a standard legacy type BIOS from AMI with a few tabs for configuring the notebook. The first menu offers hardware information, including CPU, memory, and storage installed.

The Advanced menu allows consumers to configure Intel power technologies like SpeedStep, SpeedShift, and Turbo. You can disable the e cores on this platform, and down below, you can change options for Thunderbolt. Further into the BIOS, there are options for TPM and the ability to change the boot order, etc.

Cinebench is a long-standing render benchmark that has been heavily relied upon by both Intel and AMD to highlight their newest platforms during unveils. The benchmark has two tests, a single-core workload that will utilize one thread or 1T. There is also a multi-threaded test that uses all threads or nT of a tested CPU 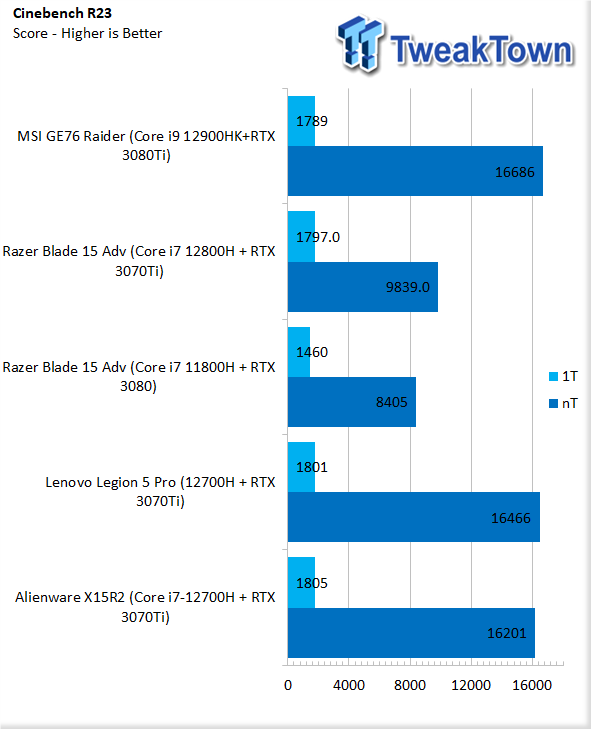 The X15 R2 is our fourth Alder Lake notebook to come through, and this sample is built very similarly to the Legion 5 Pro we just had in the lab. That said, each vendor approaches their BIOS and cooling differently, which are the biggest factors in performance with these machines. In our testing, we found single thread performance in R23 to reach 1805 on the X15, and nT came in at 16201. 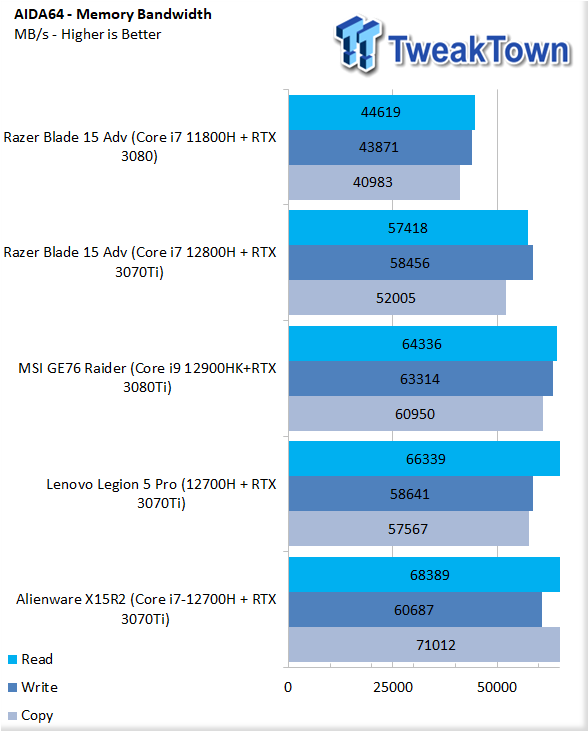 Memory bandwidth took a nice bump with the increase to 5200MHz. Memory read landed at 68K while write and copy were at 60K and 71K. 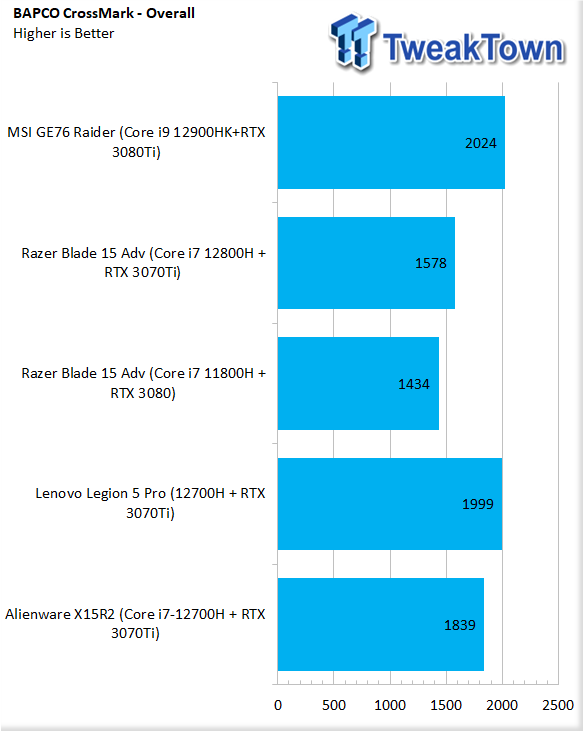 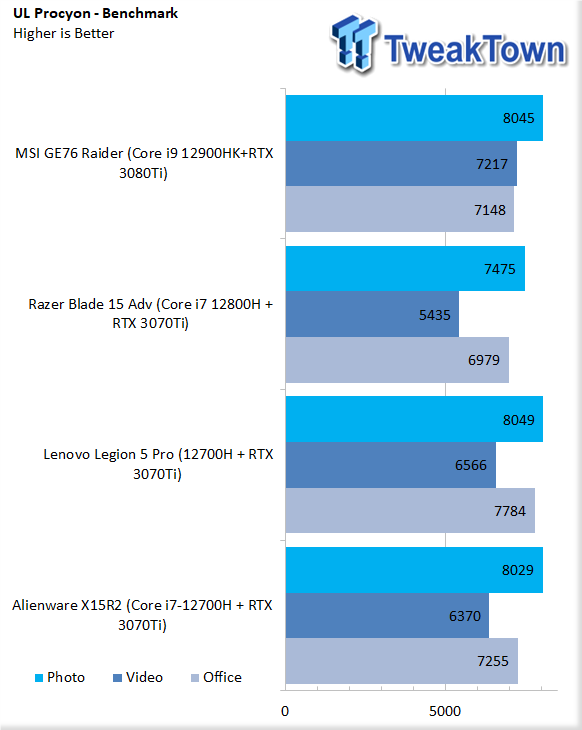 Procyon showed the X15 on par with others in Photo, scoring 8029. Office came in at 7255 and Video 6370, overall better than the Blade and just under the Legion. 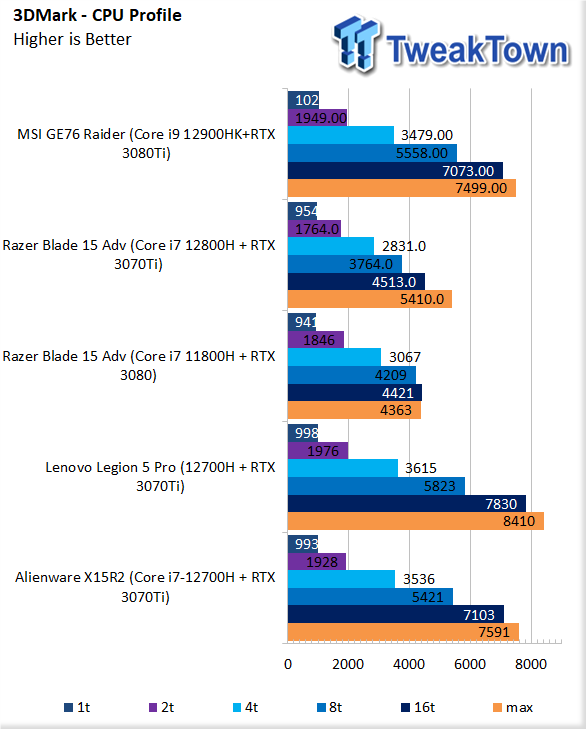 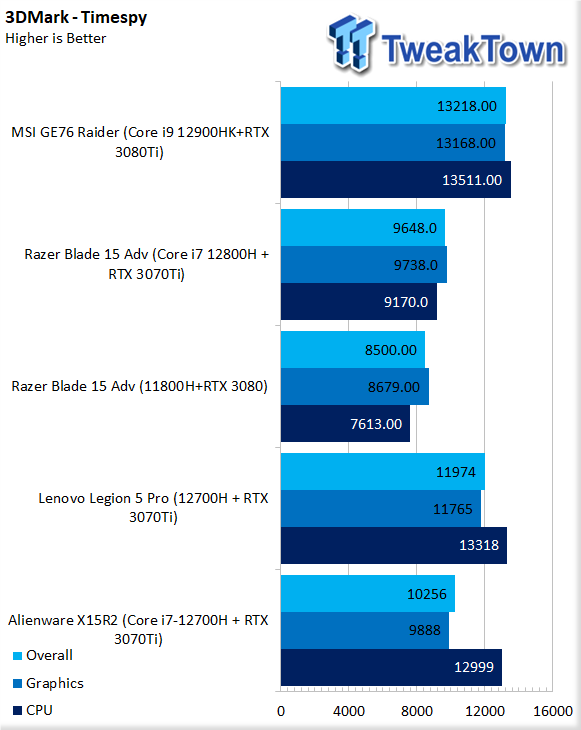 Timespy showed decent gaming performance for the X15. We landed a score of 10256. 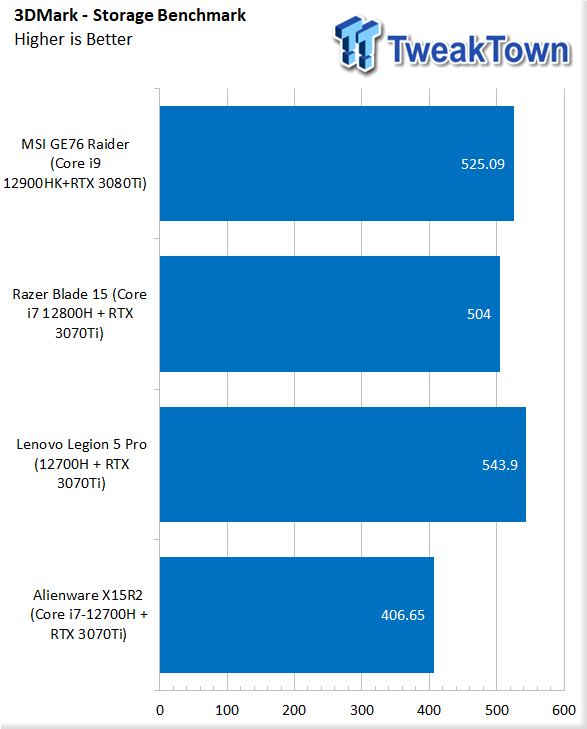 Running 3DMark storage, Alienware's Micron 3400 NVMe is much slower than the competing platforms, scoring just 406 MB/s on this test. 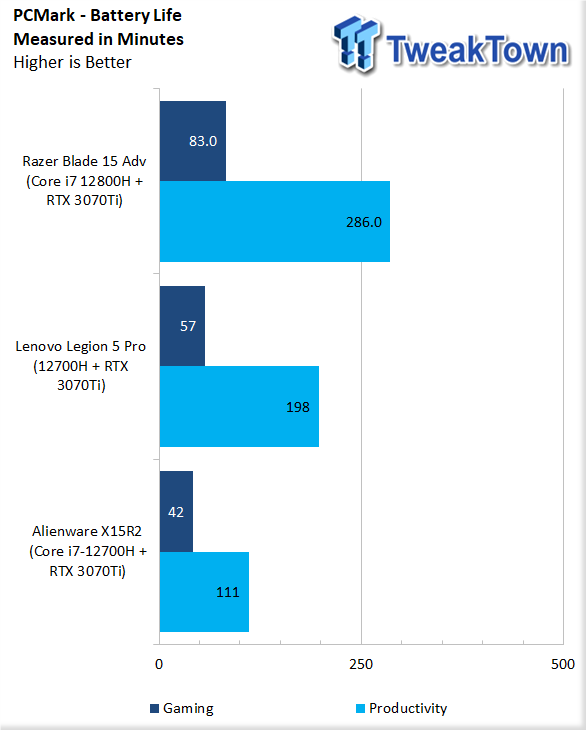 Battery Life for the Alienware X15 was surprisingly low. With its 87wH pack, I did expect much more, considering the Legion had an 80Wh pack and did much better in this test. That said, results came in with 42 minutes of gaming and 111 minutes of productivity. 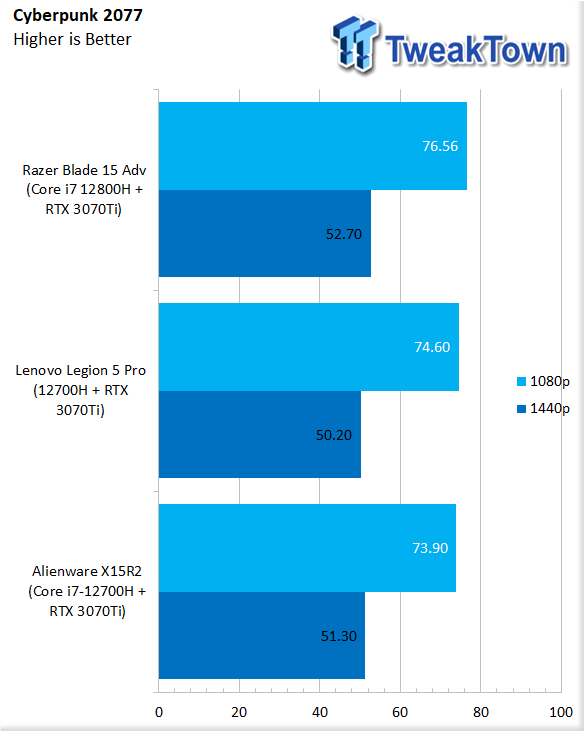 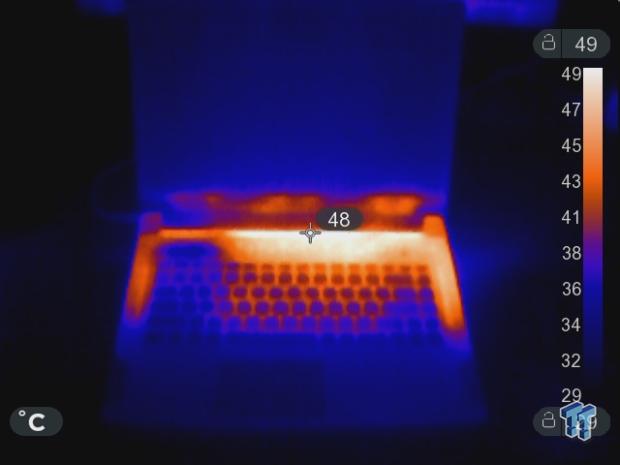 With our Seek Thermal Camera, we got some good images of the X15 R2 during testing. This showed a definite hotspot at the crease, temperatures peaking around 48c. You can also see the fans on the entire left side pulling in cool air.

I didn't spend a tremendous amount of time with the Alienware X15 R2, as we had several notebooks in the lab at the same time. That said, I enjoyed the fit and finish of the X15, including the white colorway paired with the AlienFX lighting.

The single issue I had was the rear I/O lighting was blinding when trying to plug anything into the rear ports, but it can be turned down in the software.

The trackpad worked without issue and is ample for everyday tasks, but I assume most gamers will deploy a secondary mouse as I do. The keyboard doesn't have the depth and feedback I enjoy on my machines. It's closer to what you would find on a productivity machine like the Dell XPS series.

I mentioned in the review that this X15 R2 was sent with a similar configuration to our Legion 5 Pro sample; this included the CPU, GPU, and memory. Though Alienware has the better 5200MHz solution, it may be soldered down as we didn't note any slots on the bottom side of the motherboard. In our testing, the Alienware was consistently our second-place platform, always beating out the Blade by a sizable margin but playing catch up to the Legion, even with similar hardware. It could be a tuning issue within the BIOS and/or cooling as our Windows settings are consistent across platforms.

In any case, single thread performance in R23 was top of our charts while multi-thread pulled back slightly to 16201, a few hundred under the Legion. Procyon showed excellent performance from Office, keeping standards with even the MSI Raider, and while the video workload was a bit under expectations, it wasn't far off the Legion.

With pricing for everything going up these days, it's likely a big issue for gamers looking for their next machine, and Alienware delivers in this arena. The X15 R2, as configured, is priced at $2899.99 and completely trounces the Blade 15 Advanced, which costs $100 more.