MSI introduced us to the H35 series of Intel CPUs just under a year ago in the Stealth 15m. With the release of Alder Lake desktop late last year and the unveiling and subsequent launch of Alder Lake U Processors, we should start to see vendors slowly release new solutions to market.

One of the first to be launched is the MSI GE76 Raider, a lineup of notebooks that never skimp on hardware, giving gamers the best possible configurations. With the introduction of 12th Gen CPUs, the current 2022 model will be offered in eight SKUs. CPU options include the Core i7 12700H or Core i9 12900HK, while GPUs available range from the RTX 3060 to the newly introduced RTX 3080 Ti. Of course, there are many options in between, including display, memory, and storage you can customize. 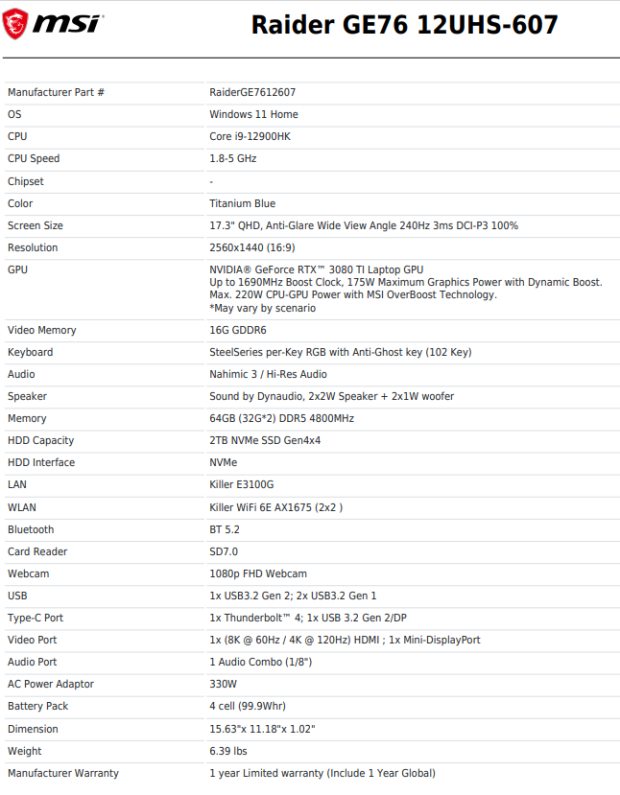 Our sample of the MSI GE76 Raider is a higher-end SKU, the base being the Core i9 12900HK CPU. This is paired with 32GB of DDR5 at 4800MHz. Storage options selected were a pair of Samsung 980 Pro NVMe SSDs, set up in basic disk mode but can be integrated with Intel VMD in the BIOS.

Our display is 1920x1080p Full HD with a refresh rate of 360Hz. This is next to the integrated Iris Xe graphics and discrete RTX 3080 Ti 16GB. Connectivity includes a single Thunderbolt 4, four USB 3.2, and an SD card reader. Additionally, we have RJ45 for the E3100G 2.5Gbe controller, HDMI and miniDP for added displays, and a single 3.5mm plated connector for your favorite gaming headset.

Pricing of the MSI GE76 Raider, configured as mentioned, comes in at $3999 with a one-year warranty. 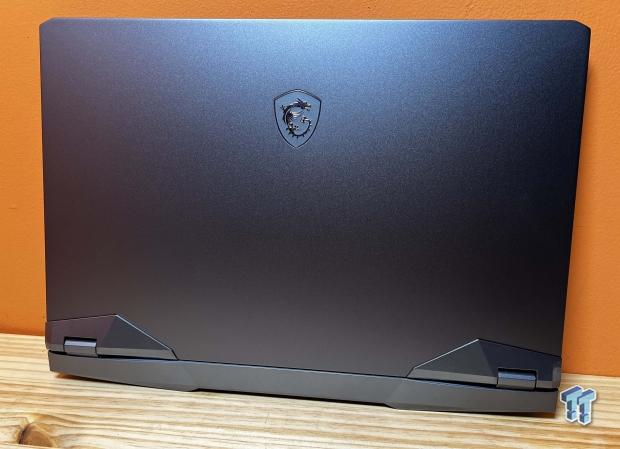 Like many premium notebook designs, the GE76 Raider is an all-metal design, gunmetal in color with a simple MSI Gaming logo centered on the display panel.

Ports down the right side include two USB 3.2 and an SD 7.0 card slot.

On the back, you will find the power input on the far right, followed by HDMI 2.1, 2.5Gbe, and Thunderbolt 4. To the far left, you will also find a miniDP port.

The left side houses two USB 3.2, one using the type-C form factor, and a single 3.5mm audio output. 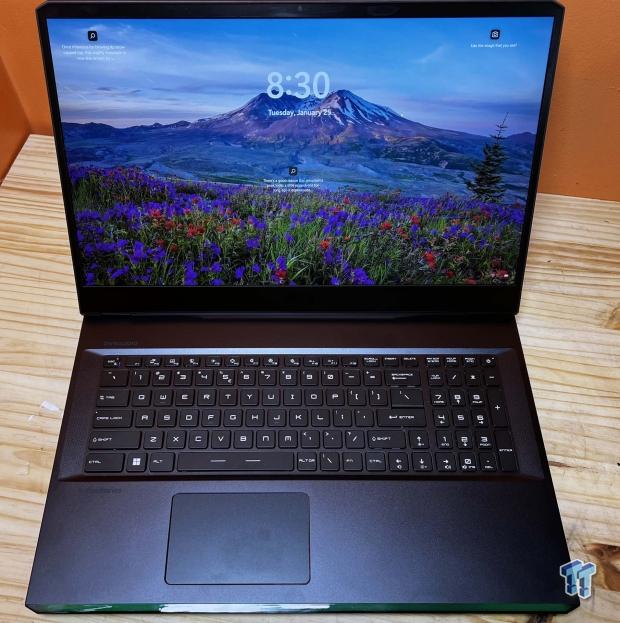 Opening the Raider, the keyboard is a full 104 keyboard with per-key RGB lighting, a SteelSeries design. The trackpad is offset to the left, and speakers are set on either side. The screen has a good inch or more of bezel at the bottom while surrounding were looking at .25" on the sides and .5" across the top to make room for the 1080p webcam. 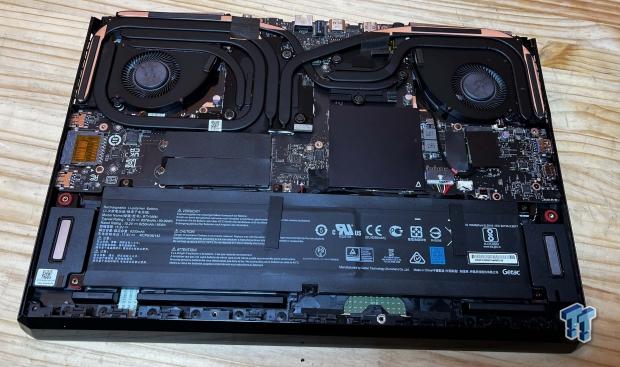 Opening up the Raider, the 99Wh battery takes up the entire bottom area of the chassis. Up above, the motherboard houses two m.2 on the left side, while two DDR5 slots are available to the right. Further to the right, you will find the m.2 slot for the Wi-Fi card, in this case, the AX1675 from Killer. At the top, we have a pretty serious network of heat pipes and fans to tame the GeForce RTX 3080 Ti and 12900HK. 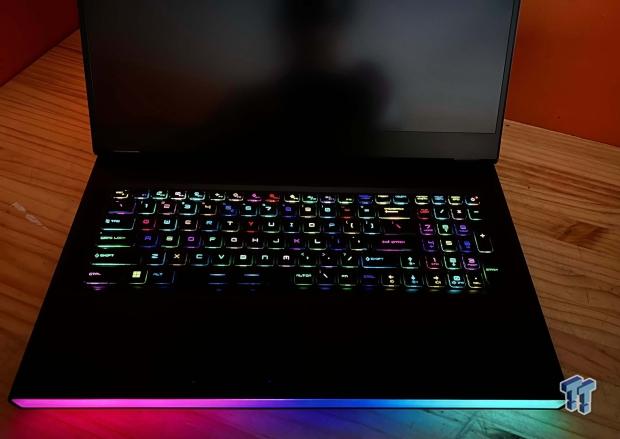 With the house lighting turned down, you can see the RGB lighting setup for the Raider. 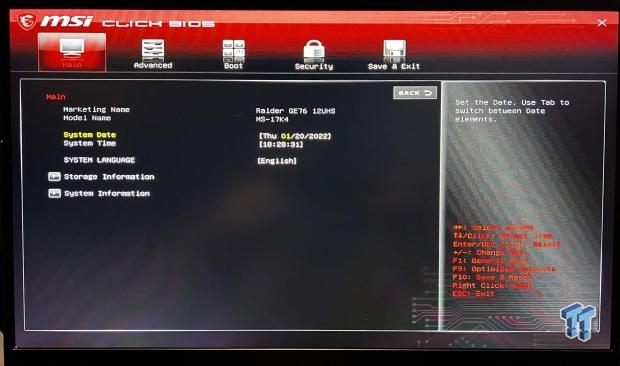 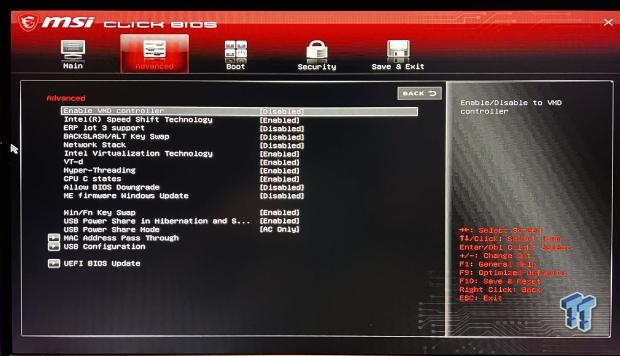 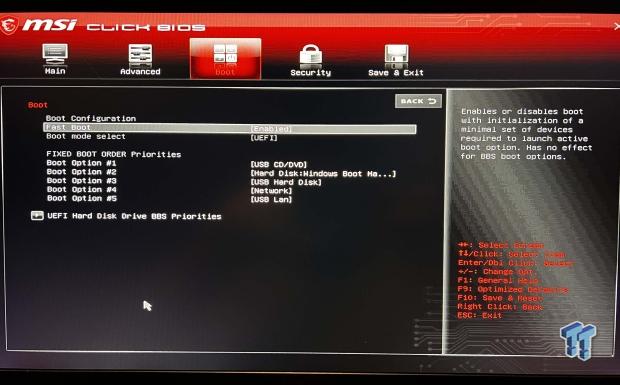 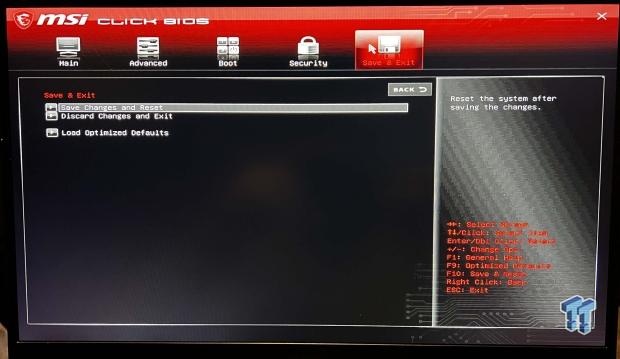 BIOS is the MSI Click BIOS, very similar to what we see on motherboards. Main menu offering information on the storage and system components.

The advanced menu allows for the configuration of Intel VMD Controller and CPU options like Speed step, Hyperthreading, and C-States. 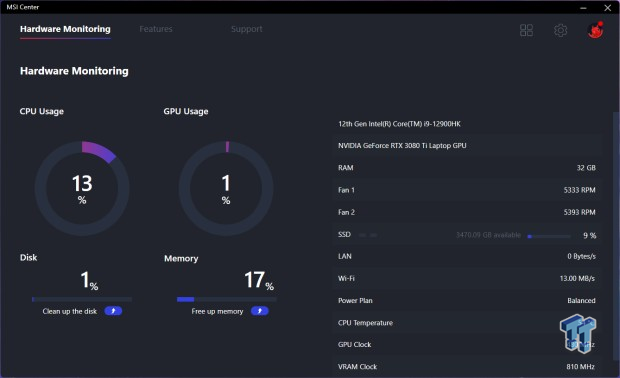 MSI Center controls the functionality of the GE76 Raider; this includes a hardware monitor for CPU and GPU. 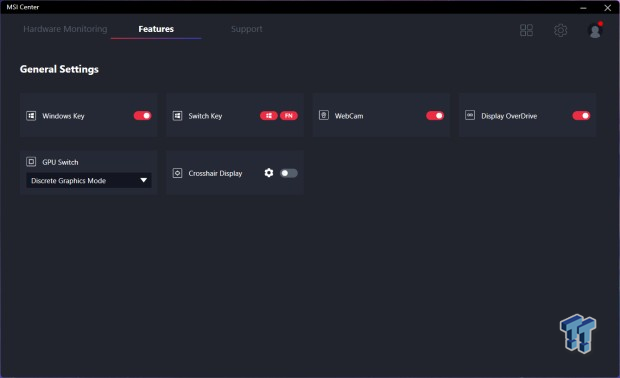 Across the top, there is a features menu that brings you to the options above. Most important here is the Hybrid / Discrete GPU switch. 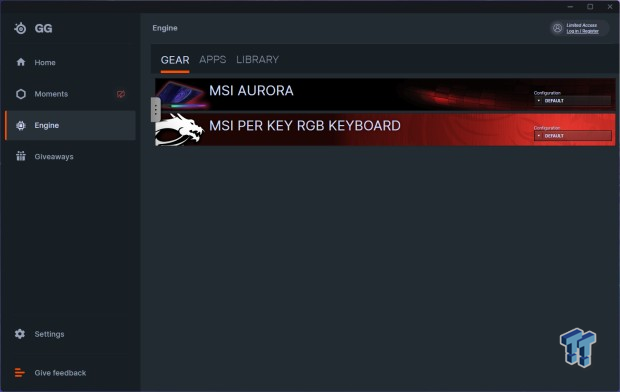 SteelSeries GG is where you will control the RGB of both the keyboard and front LED bar. 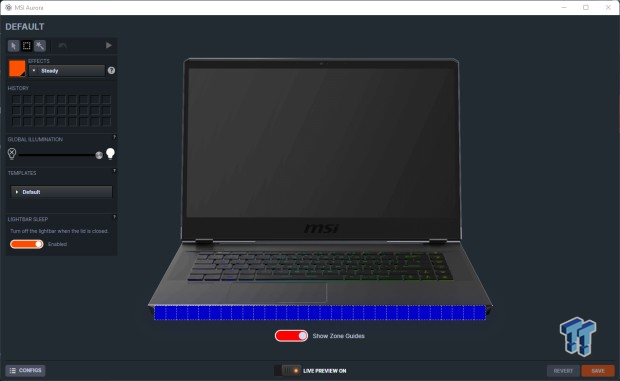 The front LED bar is broken down into 30 zones in the menu itself, making for a seamless RGB transition.

The keyboard setup is per key, as mentioned previously, with preset templates available on the right side. 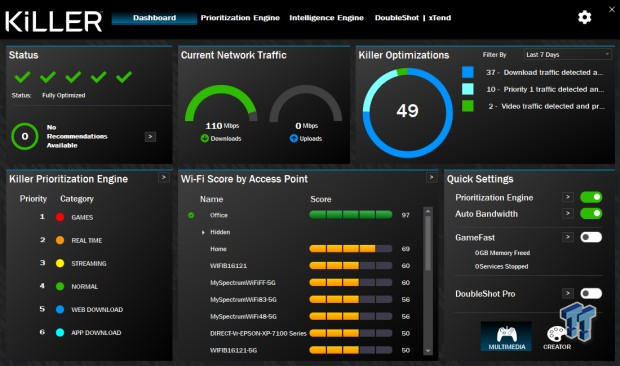 Killer has revamped their software in this latest release making for a very busy design that has all the info you need in a glance. 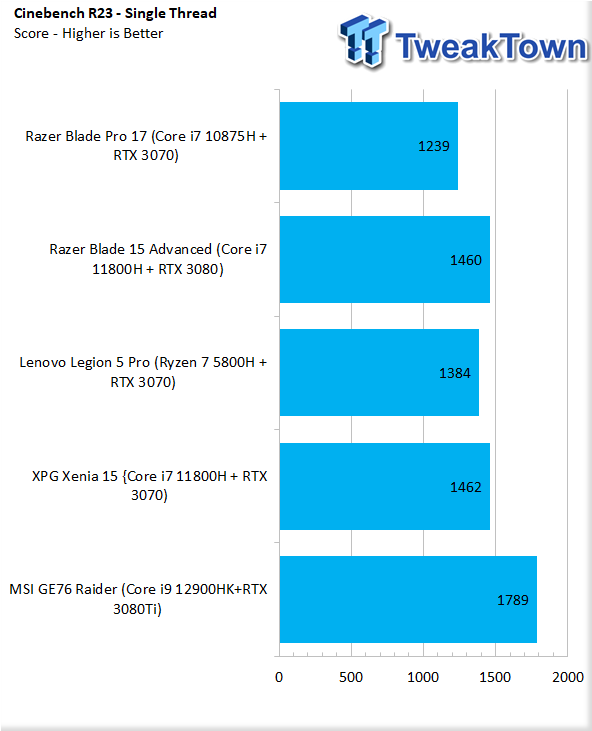 Single thread performance for the 12th Gen 12900HK is roughly 300 points better than the previous generation, and it's also a solid 400 points higher than Ryzen 5800H. 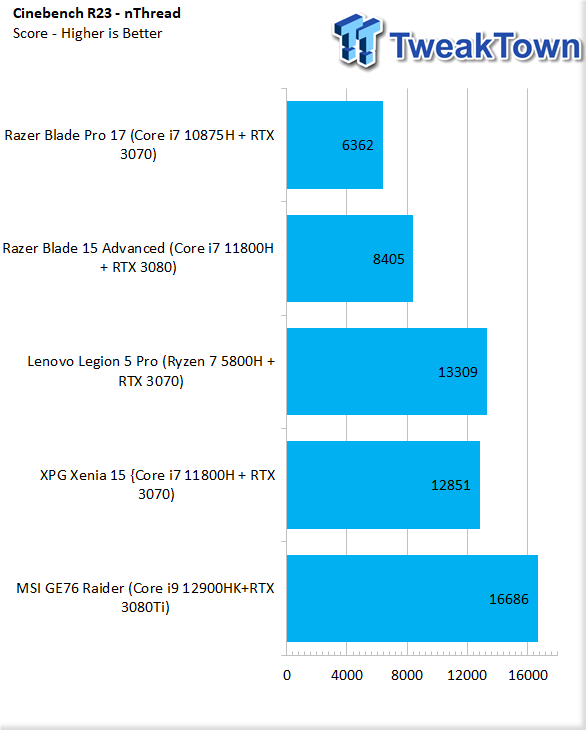 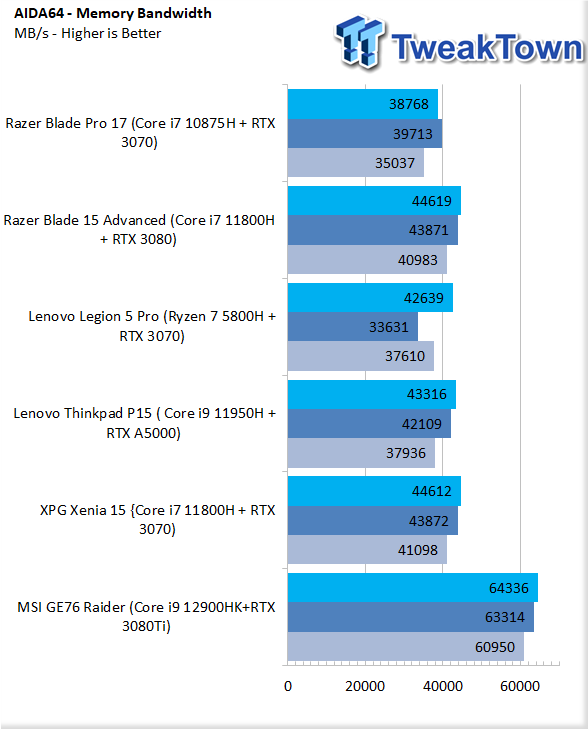 Memory bandwidth saw a huge jump to DDR5. Previous generations saw bandwidth around 45K for read and write, while Intel's 12th Gen pushes that to 65K. 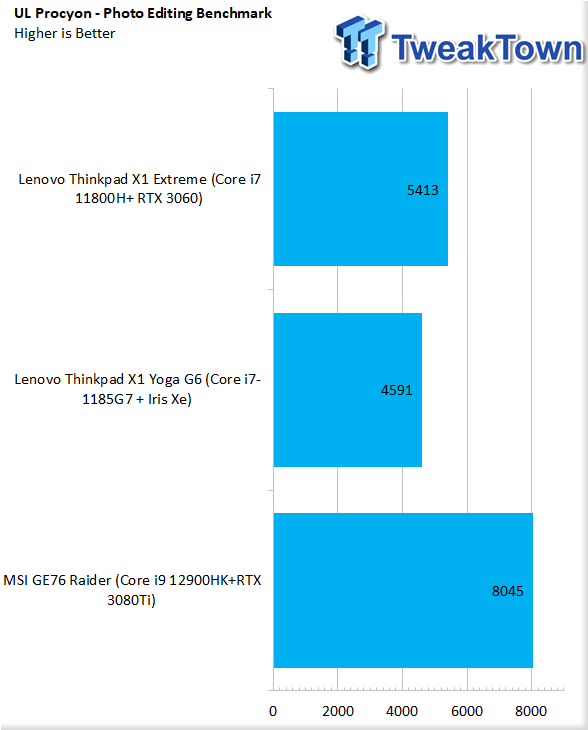 Photo Editing showed a dramatic increase in performance when compared to the previous generation. GE76 Raider scored 8045 in this scenario, a few thousand points higher than the previous. 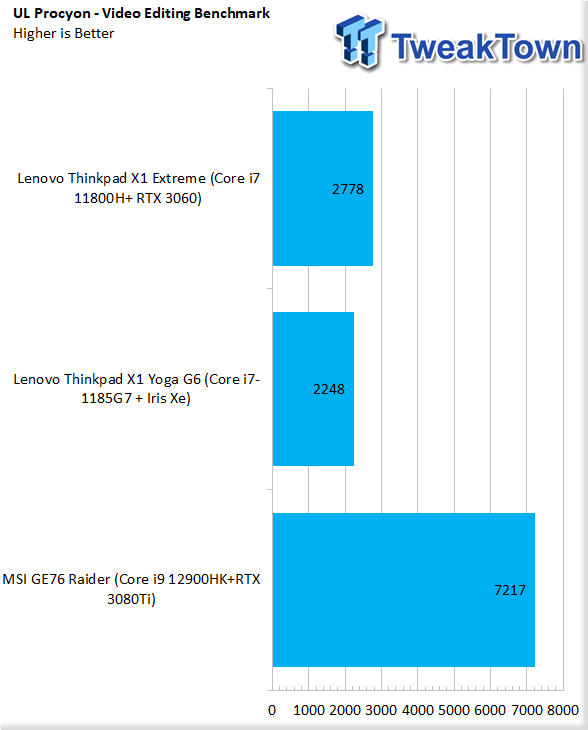 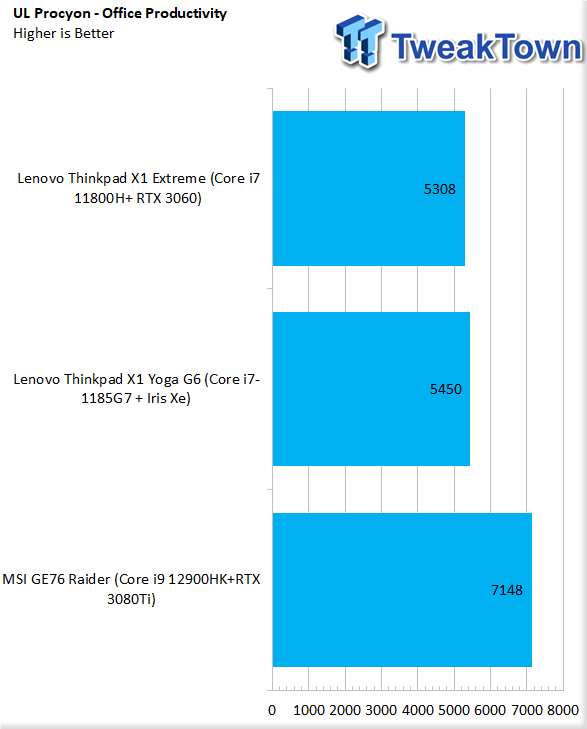 Office productivity was up as well with the Raider GE76, nearly 2000 points. 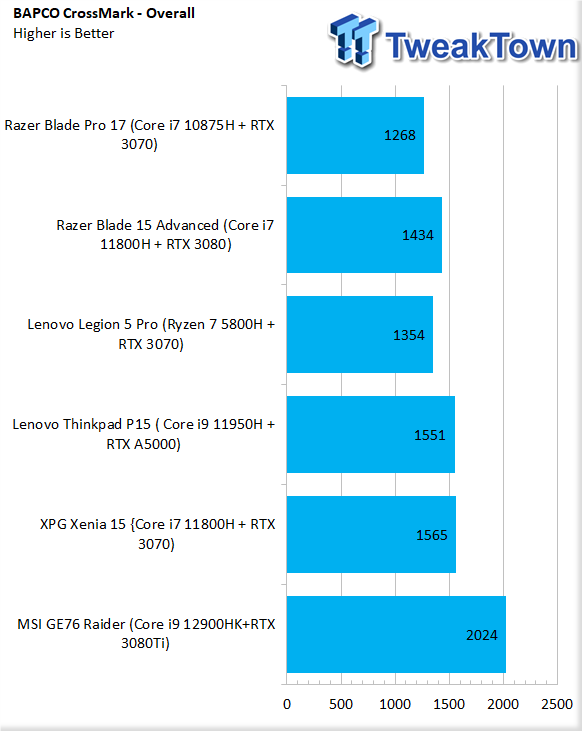 CrossMark, as expected, showed a huge boost in performance over previous generations, up by 500 points over the 11800H and 700 points better than the Ryzen. 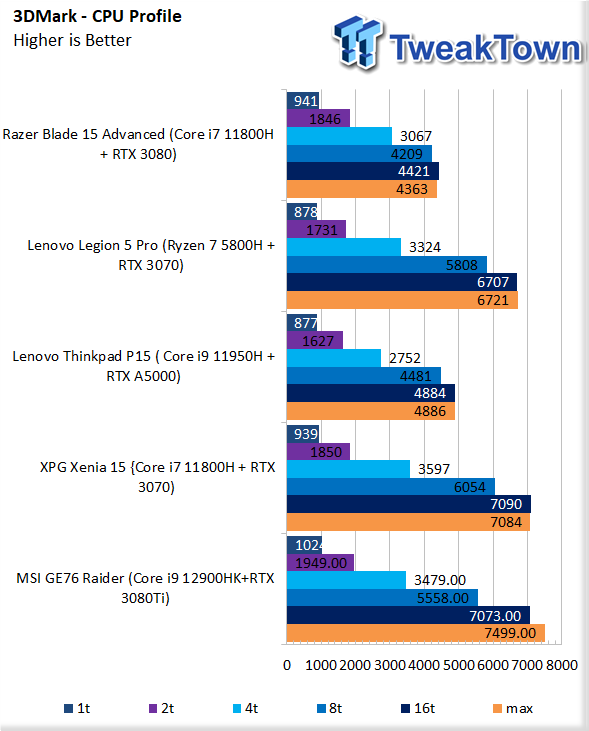 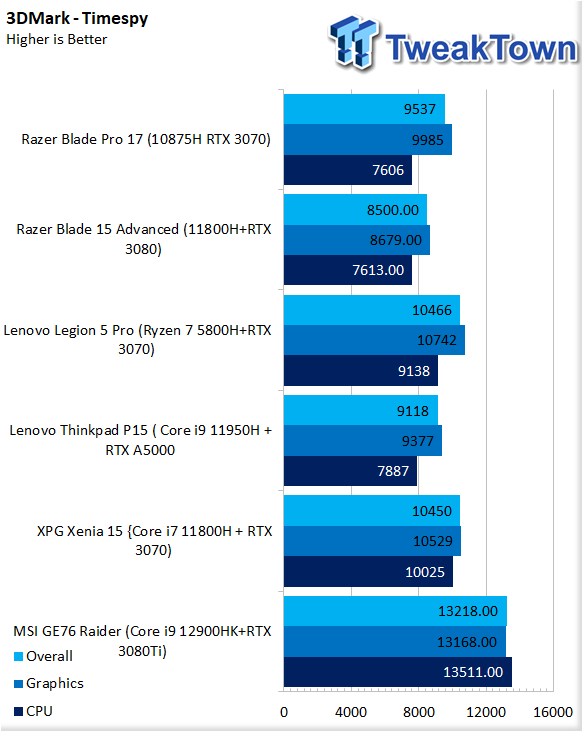 Timespy again showed increased performance for the GE76. Overall, there is a three thousand point jump in this scenario, pushed by a jump in CPU and GPU performance. 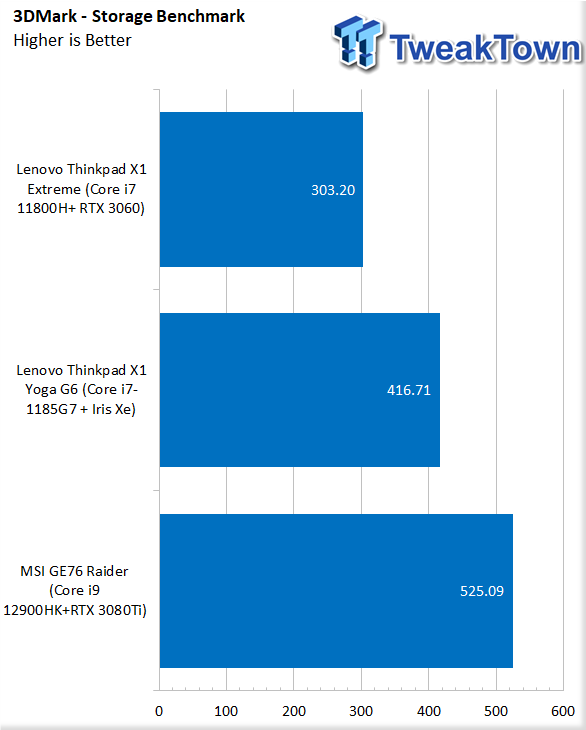 Running 3DMark storage, we see a pretty impactful difference in the drives these notebooks come with. The GE76 Raider enjoys two Samsung 980 Pro that pushed our storage score to 525 MB/s.

We ran through several titles to test the graphics performance of the GE76 Raider. 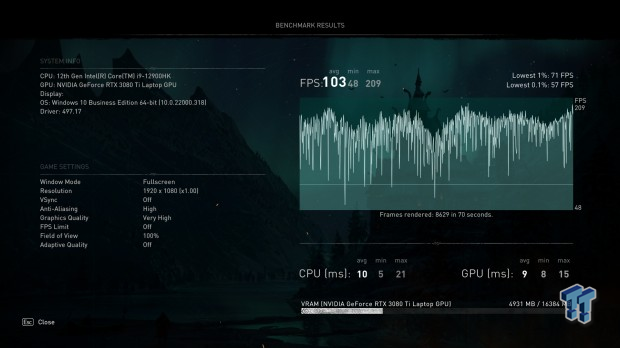 Our first setup was AC Valhalla, 1080p Very High settings. In this scenario, we pushed an average FPS of 103. 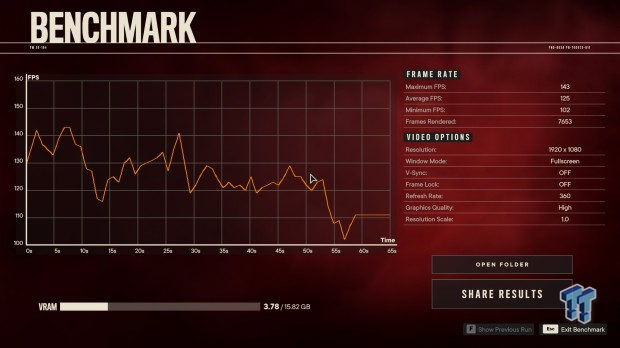 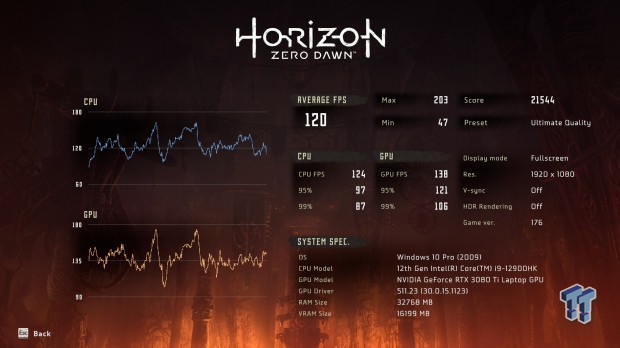 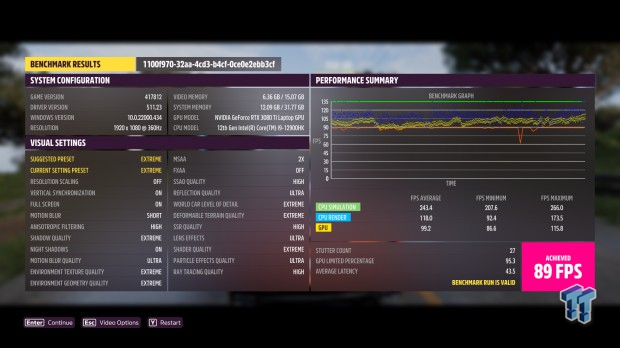 We used PCMark to test two separate battery life scenarios after running the battery through 10 cycles. 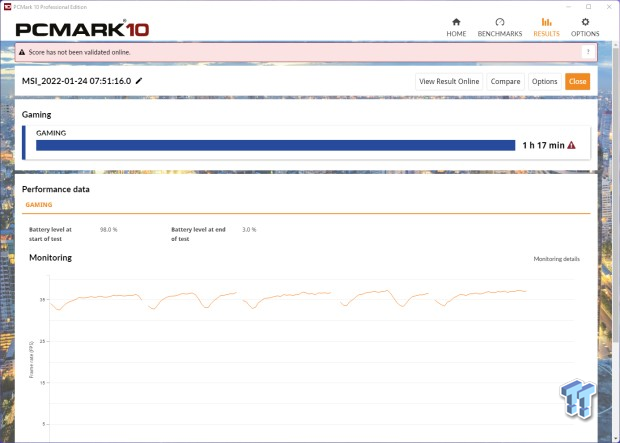 As seen in the image above, the gaming battery life scenario lasted just over an hour on the GE76 Raider. 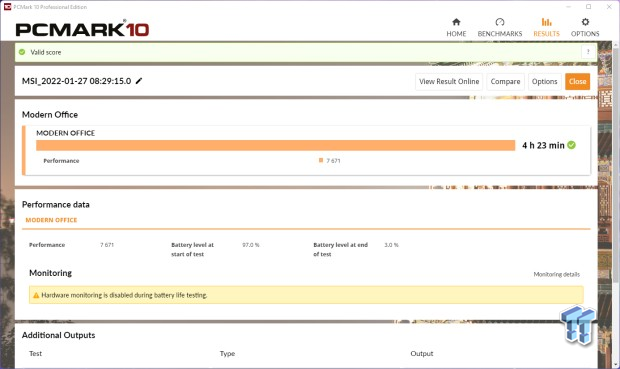 For us, MSI is starting the year with one of the best gaming notebooks on the market, achieved by combining the current best available CPU in Intel's 12th Gen 12900HK and NVIDIA's GeForce RTX 3080 Ti GPU, not to mention DDR5 memory and top-notch storage with the Samsung 980 Pro.

Availability is scheduled relatively soon; early February is what we were told. Build quality is quite good, with a solid chassis supporting the entire machine. Finish appears to be durable seven days into testing, and we can report back after several months or even next year if any issues arise.

Performance in nearly every scenario improved with the GE76 Raider and its Intel 12th Gen hardware. Comparisons showed a good 300 point gain in single-thread performance and upwards of a few thousand points in multi-threaded R23. The UL Procyon suite showed a fantastic improvement in real-world scenarios, including video and photo editing, alongside Office applications like Word and Excel.

Timespy was a solid transition benchmark for us, and the performance showed a boost of ~3000 points compared to the RTX 3070 laptop GPU from 11th Gen Xenia 15. Real World gaming offered consistent FPS over 100 from titles like Far Cry 6, AC Valhalla, and Horizon Zero Dawn, all when running at maximum quality settings and 1080p.

If I nitpick a few things about this notebook, I would say the trackpad is pretty rough. However, like many of you, I will deploy a legit gaming mouse alongside this notebook anyway, and the trackpad is functional enough to get through daily tasks without. The keyboard is good but not great. I like a bit more feedback from the keys, and while this board does have a mechanical feel, the bottoms are a bit mushy for my liking.

Outside of that, connectivity is solid, and the port layout is rather good. I like the mix of options on both sides, and additional display support comes from the rear I/O instead of the left side like so many. MSI offers a great suite of software to manage the GE76. The main application is MSI Center, giving you hardware monitoring and controls for switching between GPU modes and enabling display overdrive and the webcam.

They also introduced us to SteelSeries GG for handling all of the RGB on the notebook and, of course, Killer Intelligence Center for managing and prioritizing connectivity over a single or multiple LAN connections, which is icing on the top of an impressive gaming laptop.

MSI's GE76 Raider blows us away with fantastic component choices that includes the 12900HK and RTX 3080 Ti, allowing this to offer desktop-class performance in a slick portable form factor.