GIGABYTE had the VP of Intel with them to officially give the big P45 launch speech, which was a slightly modified one from the keynotes; however it was more of a focus on what GIGABYTE has done for the industry. GIGABYTE has been officially recognized now as the leader in motherboard technology, bringing the first Dual BIOS system as well as the first power saving technology in DES. 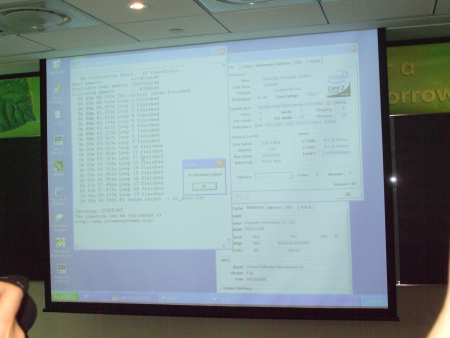 After a few speeches, we were in for a bit of a treat with famous Taiwanese overclocking guru HiCookie making an appearance with a LN2 cooled GIGABYTE DS3R motherboard and a 45nm Core 2 Extreme based on the Kentsfield quad-core running just over 5.5Ghz. Wow! 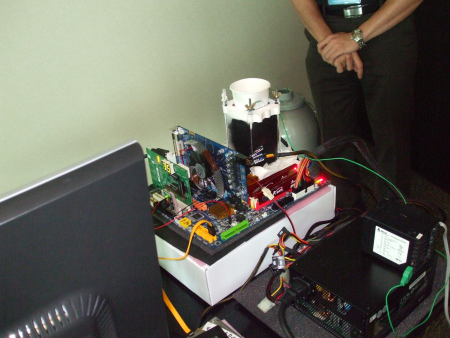 The screenshot verifies the system working and running SuperPI, unfortunately that's all the tests that were run, a 3DMark Vantage run would have been nice to see just how far it got with a CPU score. 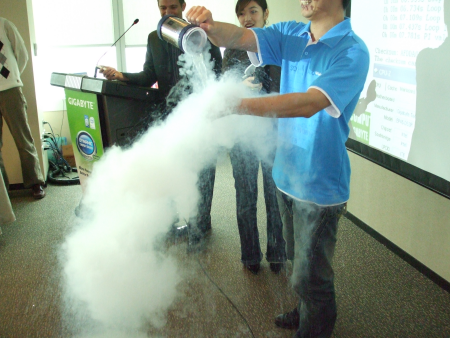 During the show, Colin Brix asked HiCookie to show us his Taipei Ninja overclocking trick. How this went down even scared me - he held a cup of LN2 about one foot off the top of his and then simply dumped it onto his hand.
Newsletter Subscription