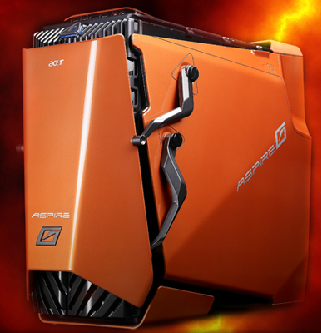 Say hello to the Acer Aspire Predator gaming system and it certainly does look like a beast packing quite a punch in the performance area.

You get all the features you would expect from a high-end gaming system such as dual graphics via Nvidia SLI, Sound Blaster X-Fi Platinum, overclocking support via nTune software, 8GB of memory but it even comes with a custom water cooling setup for the CPU.

At this stage we are not sure which motherboard is being used but it is one based on Nvidia's nForce 780i SLI chipset. It will have the option of a range of Intel processors, SLI or 3-way 9800 GTX graphics, come with a TV tuner card (which is a tad strange for a gaming system), 1000 or 750-watt power supply, Blu-ray ROM drive and much more.

You can find out more about the Predator over at the Acer website right here.