All NewsBusiness, Financial & LegalCases, Cooling & PSUContests & GiveawaysCPU, APU & ChipsetsDealsDisplays & ProjectorsGamingMotherboardsScience, Space & RoboticsStorageVideo CardsVirtual & Augmented Reality
All ReviewsAll ArticlesAudio, Sound & SpeakersCases, Cooling & PSUCPUs, Chipsets & SoCsComputer SystemsDisplays & ProjectorsGamingMotherboardsNetworkingPeripheralsStorageVideo Cards
GuidesGamingAsk the ExpertsNewsletterAboutForums
RTX 4090Windows 11Halo InfiniteBattlefield 2042Elon MuskGTA 6RTX 3080HDMI 2.1
Aliph has just unveiled its Jawbone 2 (or the sequel, as we should supposedly call it) and the folks over at Engadget were on hand to give it a hands-on preview and unboxing. 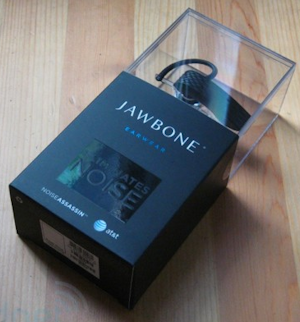 It is said to be roughly half the size of the original Jawbone headset and has a more comfortable fit. The somewhat complicated ear hook is now also gone in favor of a flexible fit design which impressed.

The interface is the same invisible one of its predecessor, but the first time you turn it on it's in pairing mode so we had no trouble there. We'd be hard pressed to notice a sound difference either way, but that was never the original's problem. The smaller design does mean a reduction in battery life, which could be a deal breaker for some, but if you're not going to be yapping away constantly the new Jawbone is a useful bit of "earwear," as Aliph would like to call it.