They have just announced their newest product, the RocketRAID 2640X4. It is a four channel PCI-Express x4 SAS RAID controller that supports RAID levels (0, 1, 5, 10 and JBOD). If you haven't already figured it out yet, it supports up to four SAS or SATA hard disk drives as well as NCQ (Native Command Queuing) for an extra speed boost.

HighPoint claims it to be one of their fastest models offering up to 501MB/s read speeds and 486MB/s write speeds (with the right configuration, of course). You skip all the hardware based features such as hardware IOP engine, onboard cache memory, BBU support but with a price targeted towards desktop users, it will probably do the trick just fine. 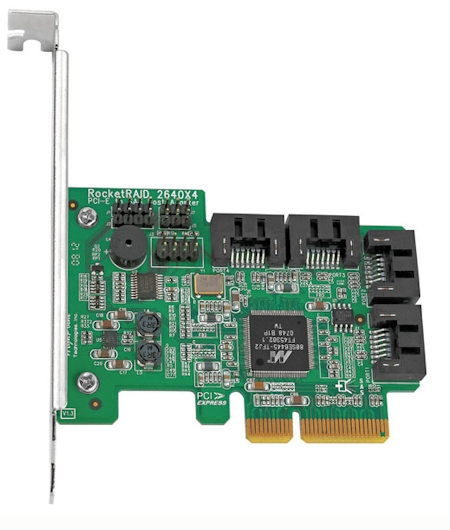 The RocketRAID 2640X4 is a 4 channel PCI-Express x4 SAS RAID controller that supports RAID levels (0, 1, 5, 10 and JBOD). The new SAS RAID controller will infuse desktops and workstations with a new level of flexibility, performance and reliability at an affordable price.