They have just announced yet another range of power supplies called EliteXStream which will be will be available in 800-watt and 1000-watt versions both with 120mm cooling fan and five year warranty. It claims a high efficiency of 82% and received 80+ certification. OCZ reckons they are the top choice for high-powered gaming systems and workstations. 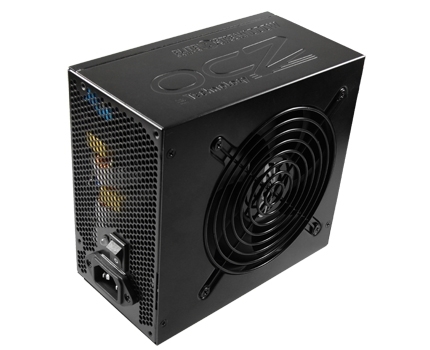 Co-developed with the experts at PC Power & Cooling, the EliteXStream is a flagship model among OCZ's lineup of gamer-oriented power supplies. Expanding on a lineup of powerful and stable PSUs, OCZ designed the 800W and 1000W EliteXStream for optimum power distribution to all components by utilizing the superior "single +12V rail" design perfected by PC Power & Cooling. This trail-blazing approach to +12V rail design ends the need to budget power "across the rails" as is the case with the less effective multi-rail design found in the vast majority of high-performance PSUs on the market today.

"I am excited to bring a high-performance PSU to market that so effectively fuses the in-depth gaming and enthusiast experience of OCZ with the legendary power supply expertise of the PC Power & Cooling division", said Ryan Edwards, Product Manager for the OCZ Technology Group. "Featuring up to 86% efficiency, a staggering single +12V rail output, a complete array of connectors, and an attractive MSRP, the new EliteXstream Series of PSUs sets a new standard for both the OCZ brand and the high-performance industry in general."

You can find out more over at the OCZ product page website.