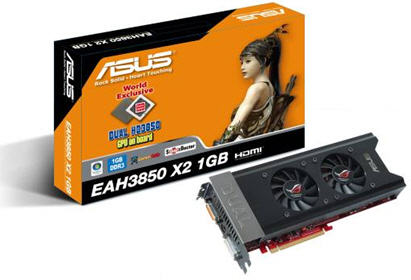 Dubbed the "EAH3850X2/HTDI/1G", the card is designed near identically to its bigger brother, but with lower clockrates of 668MHz on the core and 1658MHz on the 1GB of GDDR3 memory. Pricing isn't yet known, but given where the 3870 X2 currently sits it should be an attractive alternative for those looking to go Crossfire on a budget.

The EAH3850X2/HTDI/1G also comes specially designed with dual fansinks for both GPUs - ensuring efficient heat dissipation for more stable operations. On top of all this, the ASUS EAH3850X2/HTDI/1G is equipped with a large onboard memory size of 1GB - designed to provide feature-rich DirectX 10 gaming and the best multimedia playback without any lagging at ultra-high resolutions and maximum quality settings.