The immediate plan is to slow down production and to have all stock off the shelves as soon as March of this year. There is no denying that a lot of the enthusiasts expected the announcement with the news that has been getting around the interweb over the past week. 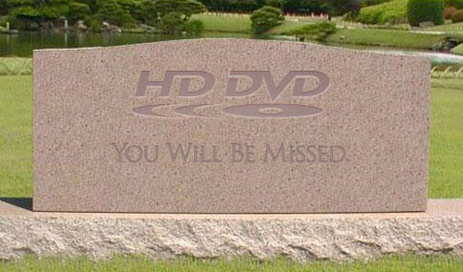 This is one part of the picture though as at the moment the stance on Universal and Paramount are currently unknown. There doesn't seem to be any real doubt that we will see Paramount and its subsidiaries jump back on board but Universal have always had a personal gripe with Sony. Ultimately though money talks and Universal will have to step up and start offering movies on Blu-ray, we just hope that it is sooner than later.

Original word was that Blades of Glory was manufactured for Blu-ray but got pulled at the last second with the new deal struck up with Toshiba. Rumors got out of control with word that Paramount burnt all their Blu-ray stock. What will be interesting now is that once Paramount announces that they will support Blu-ray again, if we see releases within weeks and not months.

It is a very exciting time for anyone who has followed the war and been on the Blu side. Now that a format has been decided on let's hope that we can start to see some of the past major releases like Lord of the Rings, Star Wars, Indiana Jones and so many more wonderful classics.