Binance has sent a whopping $2 billion worth of Bitcoin to an unknown wallet address, amounting to a total of 127,351 Bitcoin sent in a single transaction. 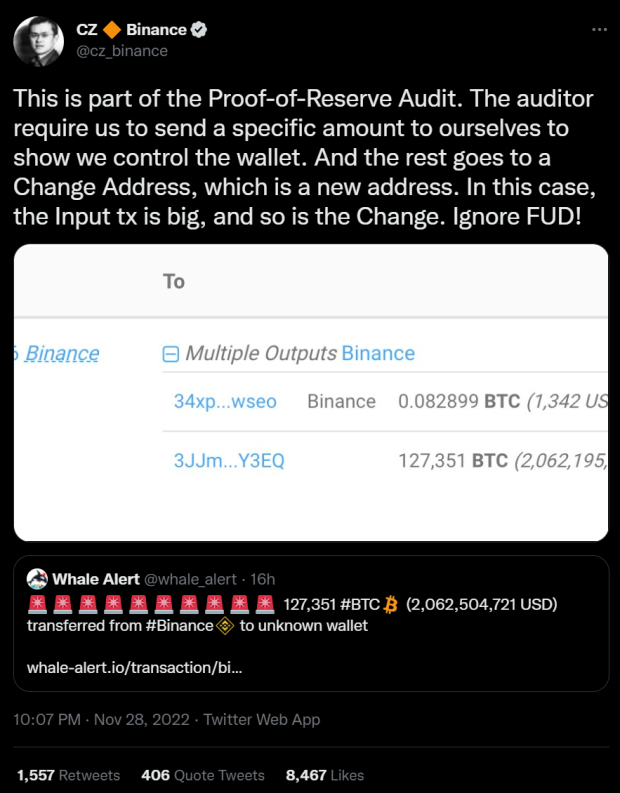 Whale Alert reported the transaction occurred on November 28, with on-chain data suggesting that the $2 billion was sent at 10:00 AM UTC and only cost Binance a fee of 0.000026 BTC, or $0.42. Following the collapse of what was the world's second-largest cryptocurrency exchange, FTX, many cryptocurrency holders are justifiably concerned with the movements of cryptocurrency exchanges, especially ones of such large volumes.

Unsurprisingly, the transaction caused a ripple effect of fear, uncertainty, and doubt (FUD) to spread online, which sparked a response from Binance CEO Changpeng "CZ" Zhao, who took to Twitter to explain that the $2 billion transaction was a part of Binance's proof-of-reserve (PoR) audits. These audits are to demonstrate that the cryptocurrency exchange holds the same number of funds it publicly claims to have, hence "proof-of-reserve".

The Binance CEO wrote on Twitter that the auditor has required the exchange to send a specific amount to another wallet address to prove that Binance is in control of the wallet. Additionally, Zhao wrote that the remaining funds go to a "change address, which is a new address. In this case, the input tx is big, and so is the change." 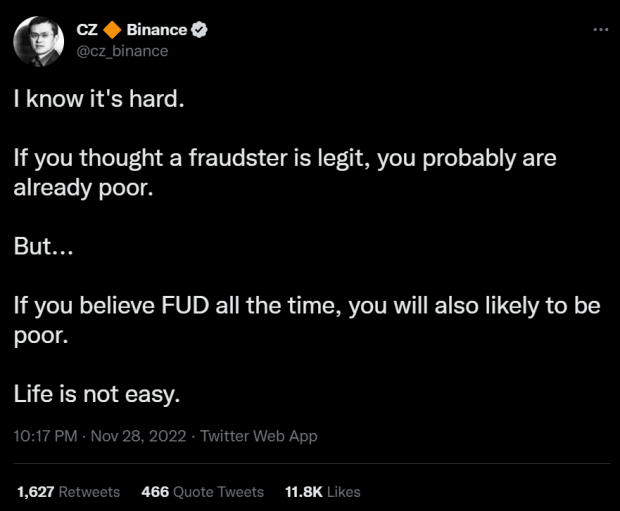 Zhao doubled down with a follow-up tweet that targeted investors who are believing the FUD that is being spread because of the transaction. Zhao wrote, "I know it's hard. If you thought a fraudster is legit, you probably are already poor. But... If you believe FUD all the time, you will also likely to be poor. Life is not easy."

Notably, Zhao warned just earlier this month, on November 13, that it's a bad sign if an exchange has to move large amounts of cryptocurrency "before or after they demonstrate" their wallet addresses. Adding that the movement is a "clear sign of problems. Stay away. Stay #SAFU." 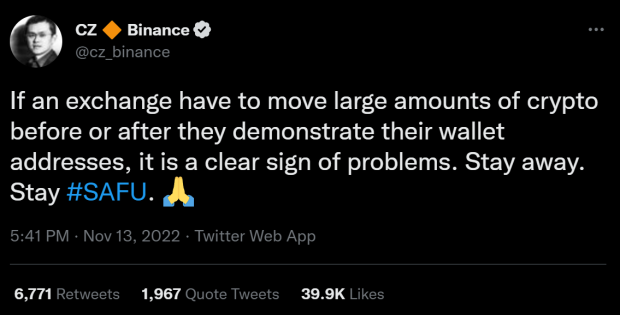 The fall of FTX has put targets on the back of cryptocurrency exchanges, with investors now inquiring about the exchange's reserves while simultaneously flocking to pull assets out of the exchanges and onto self-custody wallets. On November 14, on-chain analytics firm Glassnode reported that the number of Bitcoin withdrawals from centralized exchanges has hit a 17-month high of 3,424.315. If you are interested in reading more on that story, or anymore cryptocurrency-related news check out the above and below links.