Intel is reportedly gearing up for a February 2023 reveal of its next-gen HEDT platform in the form of the upcoming Sapphire Rapids "Fishhawk Falls" Xeon CPUs... but with it we'll see the W790 chipset, and now, we have a Canadian retailer listing pricing for a W790 motherboard real, real early.

Intel's upcoming 4th Gen Xeon Scalable CPU will be based on the Sapphire Rapids CPU architecture, which will be unveiled on January 10 according to the latest rumors... meanwhile, Canadian retailer ATIC has listed -- very early, very, very early I might add -- the SuperMicro X13SWA motherboard which is based on the upcoming W790 chipset. 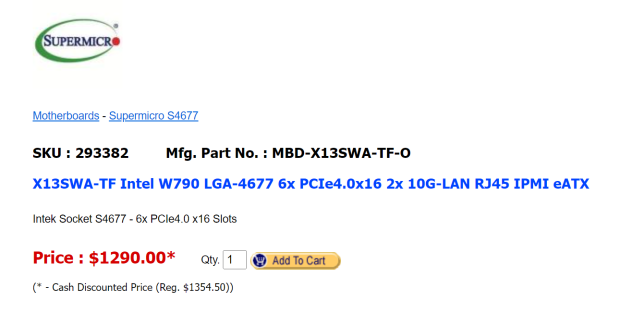 SuperMicro X13WSA-TF motherboard based on the W790 chipset (source: ATIC)

The new W790 chipset from Intel is enjoying some early specifications from ATIC, where the motherboard should have 6 x PCIe 4.0 x16 slots, dual 10GbE ethernet ports, and in the larger E-ATXD form factor. Note that there's no PCIe 5.0 support here, while the LGA-4677 socket is going to be the star of the show here, housing that next-gen Sapphire Rapids CPU.

ATIC has the upcoming SuperMicro X13SWA-TF motherboard listed for $1290 CAD, which converts over to around $963 USD or so. Remember this is an early listing, so the pricing and specifications are subject to change as usual. We should have more information in the coming weeks, and more so at CES 2023 which kicks off in January 2023 in Las Vegas, Nevada.