Twitter has officially suspended sign-ups of its controversial Twitter Blue subscription following a disastrous launch that has caused significant reputational damage to advertisers.

Following a $44 billion buyout of the social media giant, Elon Musk had a vision for Twitter: Everyone and anyone could be verified if they paid $8 a month via Twitter Blue for the privilege. This idea wasn't so easy to implement, especially with all the existing verified users. Twitter has gone back and forth between having two verified badges--one denoting an official institution, company, brand, or person, and another separate one saying the user is verified.

Chaos ensued when users signed up to Twitter Blue and used their new check marks to impersonate public figures like the President of the United States, or even former President George W. Bush, O.J. Simpson, and major billion-dollar advertisers like Nintendo, who happens to be one of the most litigious companies on the planet. Even Elon Musk's own company Tesla wasn't exempt from the parodies. Brands have had to outright apologize to their followers, including Eli Lilly and Company, who had to tell followers that no, they were not offering free insulin as an impersonator had promised. The damage has been done on a wide scale and advertisers are reportedly pulling out en masse.

Now Twitter has suspended sign-ups of Twitter Blue in an attempt to curb these impersonations, which have caused reputational harm for brands, advertisers, and the platform itself. 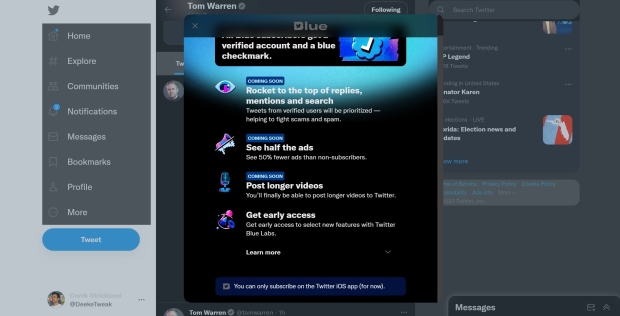 Elon Musk has already warned workers that Twitter may not survive, saying that the "economic picture is dire" because Twitter is so dependent on advertising. It will likely become much, much more challenging to attract advertisers in a platform where brands can so easily be impersonated--or could, before Twitter Blue subscriptions were halted.

The FTC is currently investigating the recent mass layoffs of employees and the resignation of Twitter's compliance, security, and trust & safety officers.