Forza Horizon 5 is getting a new update that will add in support for NVIDIA DLSS 2.0 and AMD FSR 2.0 upscaling technologies, as well as improved ray tracing for PC gamers.

Playground Games explained on the official Forza Motorsport website that the upcoming "Donut Media" series update will be available on the Microsoft Store and Steam on November 8. The developer explained that they've "enhanced" the DirectX Raytracing on the PC with two new presets: Ultra and Extreme. 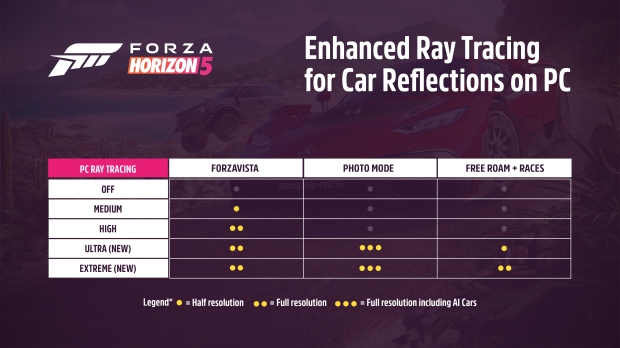 The developer explains that the beefed-up ray tracing on the PC will see true-to-life reflections for the player car in both Free Roam and Races, as well as "realistic" Drivatar reflections in Photo Mode. Ray tracing will continue to be available in Forzavista, just like it is now.

Forza Horizon 5's upcoming update will add AMD FSR 2.0 technology, where in Performance mode the developer says that it can construct a 4K rendered image from a 1080p frame buffer, adding in some serious performance (without losing visual quality too much). The developer is clear that FSR 2.0 will also work on all PC graphics cards from AMD, NVIDIA, and even Intel.

As for NVIDIA DLSS support, we have DLSS 2.0 that will also do the same as FSR 2.0 -- in Performance mode, it will generate a 4K rendered image from a 1080p frame buffer -- providing more performance at higher resolutions, without losing image quality.

Playground Games explains that "some" ray tracing settings and scenarios will render reflections at half resolution, while others will be rendered at their full resolution. You can scope out all of that in the table above, which breaks it down depending on which ray tracing mod, or which game mode you're playing in Forza Horizon 5. 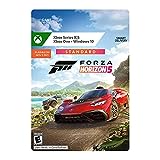