NASA has taken to its blog to explain that its InSight lander detected a magnitude 4 Marsquake on December 24, which was later discovered to be caused by a meteor strike that the space agency is saying is one of the biggest on Mars since NASA began monitoring the cosmos. Notably, researchers have penned two new papers published in the journal Science that detail the meteorite hit closer to the equator and excavated large boulder-sized chunks of ice that were buried beneath the martian surface.

The space agency discovered that the December 24 Marsquake was caused by a meteorite impact after checking over before-and-after images snapped by NASA's Mars Reconnaissance Orbiter (MRO), which has and still is taking pictures of the Red Planet. What researchers found when looking at the images was a large crater with a diameter of 490 feet, leading researchers to believe the meteorite was between 16 to 39 feet wide.

"The image of the impact was unlike any I had seen before, with the massive crater, the exposed ice, and the dramatic blast zone preserved in the Martian dust. I couldn't help but imagine what it must have been like to witness the impact, the atmospheric blast, and debris ejected miles downrange," said Liliya Posiolova, who leads the Orbital Science and Operations Group at MSSS.

Notably, a meteor of the same size attempting to collide with the surface of Earth would have burned up in our planet's atmosphere, but since Mars' atmosphere is only 1% as dense as Earth's, this small asteroid had no problems reaching the surface at high speeds. The crater is located in a region called the Amazonis Planitia and is estimated to stretch 490 feet across and at least 70 feet deep, with some of the materials from the impact being thrown as far as 23 miles away. 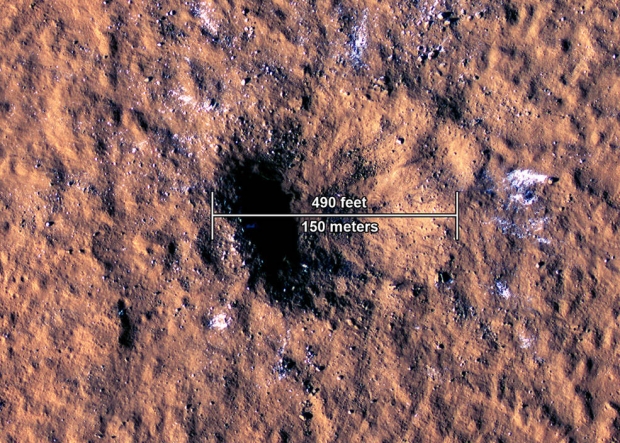 NASA writes that with the data provided by InSight and MRO, it has now witnessed the real-time formation of one of the largest craters in the solar system. Mars has many craters on its surface, with the majority dating back thousands to millions of years ago. However, the space agency wasn't around to witness them as it was this meteorite impact, hence its high regard. 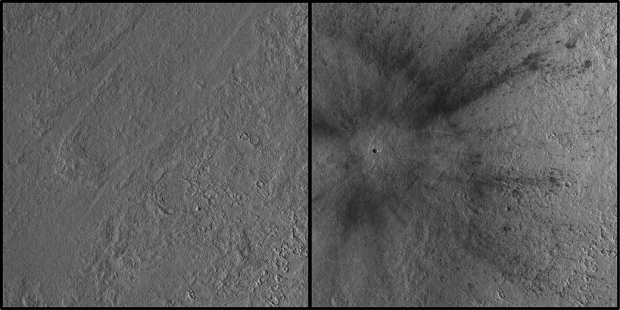 InSight landed on the surface of Mars in 2018, and since then, it has detected 1,318 Marsquakes, some caused by smaller meteoroid impacts.

"It's unprecedented to find a fresh impact of this size. It's an exciting moment in geologic history, and we got to witness it," said Ingrid Daubar of Brown University, who leads InSight's Impact Science Working Group.